Read At the Mouth of the River of Bees: Stories Online

At the Mouth of the River of Bees: Stories

BOOK: At the Mouth of the River of Bees: Stories
>>DOWNLOAD HERE >>READ ONLINE NOW
ads 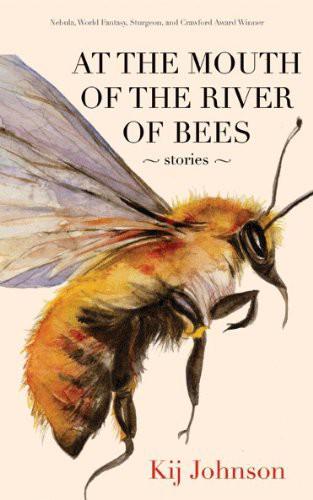 My Wife Reincarnated as a Solitaire—Exposition on the Flaws in My Wife’s Character—The Nature of the Bird—The Possible Causes—Her Final Disposition.

Chenting, in the Land of the Dead

At the Mouth of the River of Bees

The Cat Who Walked a Thousand Miles

The Man Who Bridged the Mist

This is a work of fiction. All characters and events portrayed

in this book are either fictitious or used fictitiously.

At the Mouth of the River of Bees: Stories
copyright © 2012 by Kij Johnson. All rights reserved.

Distributed to the trade by Consortium.

Aimee’s big trick is that she makes 26 monkeys vanish onstage.

She pushes out a claw-foot bathtub and asks audience members to come up and inspect it. The people climb in and look underneath, touch the white enamel, run their hands along the little lions’ feet. When they’re done, four chains are lowered from the stage’s fly space. Aimee secures them to holes drilled along the tub’s lip, gives a signal, and the bathtub is hoisted ten feet into the air.

She sets a stepladder next to it. She claps her hands and the 26 monkeys onstage run up the ladder one after the other and jump into the bathtub. The bathtub shakes as each monkey thuds in among the others. The audience can see heads, legs, tails; but eventually every monkey settles and the bathtub is still again. Zeb is always the last monkey up the ladder. As he climbs into the bathtub, he makes a humming boom deep in his chest. It fills the stage.

And then there’s a flash of light, two of the chains fall off, and the bathtub swings down to expose its interior.

They turn up later, back at the tour bus. There’s a smallish dog door, and in the hours before morning the monkeys let themselves in alone or in small groups, and get themselves glasses of water from the tap. If more than one returns at the same time, they murmur a bit among themselves like college students meeting in the dorm halls after bar time. A few sleep on the sofa and at least one likes to be on the bed, but most of them wander back to their cages. There’s a little grunting as they rearrange their blankets and soft toys, and then sighs and snoring. Aimee doesn’t really sleep until she hears them all come in.

Aimee has no idea what happens to them in the bathtub, or where they go, or what they do before the soft click of the dog door opening. This bothers her a lot.

Aimee has had the act for three years now. She was living in a month-by-month furnished apartment under a flight path for the Salt Lake City airport. She was hollow, as though something had chewed a hole in her body and the hole had grown infected.

There was a monkey act at the Utah State Fair. She felt a sudden and totally out of character urge to see it. Afterward, with no idea why, she walked up to the owner and said, “I have to buy this.”

He nodded. He sold it to her for a dollar, which he told her was the price he had paid four years before.

Later, when the paperwork was filled out, she asked him, “How can you leave them? Won’t they miss you?”

“You’ll see, they’re pretty autonomous,” he said. “Yeah, they’ll miss me and I’ll miss them. But it’s time, they know that.”

He smiled at his new wife, a small woman with laugh lines and a vervet hanging from one hand. “We’re ready to have a garden,” she said.

He was right. The monkeys missed him. But they also welcomed her, each monkey politely shaking her hand as she walked into what was now her bus.

Aimee has: a 19-year-old tour bus packed with cages that range in size from parrot-sized (for the vervets) to something about the size of a pickup bed (for all the macaques); a stack of books on monkeys ranging from
All About Monkeys!
to
Evolution and Ecology of Baboon Societies
; some sequined show costumes, a sewing machine, and a bunch of Carhartts and tees; a stack of show posters from a few years back that say 24 monkeys! face the abyss; a battered sofa in a virulent green plaid; and a boyfriend who helps with the monkeys.

She cannot tell you why she has any of these, not even the boyfriend, whose name is Geof, whom she met in Billings seven months ago. Aimee has no idea where anything comes from anymore. She no longer believes that anything makes sense, even though she can’t stop hoping.

The bus smells about as you’d expect a bus full of monkeys to smell, though after a show, after the bathtub trick but before the monkeys all return, it also smells of cinnamon, which is the tea Aimee sometimes drinks.

For the act, the monkeys do tricks or dress up in outfits and act out hit movies—
The Matrix
is very popular, as is anything where the monkeys dress up like little orcs. The maned monkeys, the lion-tails and the colobuses, have a lion-tamer act with the old capuchin female, Pango, dressed in a red jacket and carrying a whip and a small chair. The chimpanzee (whose name is Mimi, and no, she is not a monkey) can do actual sleight of hand; she’s not very good, but she’s the best Chimp Pulling A Coin From Someone’s Ear in the world.

The monkeys can also build a suspension bridge from wooden chairs and rope, make a four-tier champagne fountain, and write their names on a whiteboard.

The monkey show is very popular, with a schedule of 127 shows this year at fairs and festivals across the Midwest and Great Plains. Aimee could do more, but she likes to let everyone have a couple months off at Christmas.

This is the bathtub act:

Aimee wears a glittering purple-black dress designed to look like a scanty magician’s robe. She stands in front of a scrim lit deep blue and scattered with stars. The monkeys are ranged in front of her. As she speaks they undress and fold their clothes into neat piles. Zeb sits on his stool to one side, a white spotlight shining straight down to give him a shadowed look.

She raises her hands.

“These monkeys have made you laugh, and made you gasp. They have created wonders for you and performed mysteries. But there is a final mystery they offer you—the strangest, the greatest of all.”

She parts her hands suddenly, and the scrim goes transparent and is lifted away, revealing the bathtub on a raised dais. She walks around it, running her hand along the tub’s curves.

“It’s a simple thing, this bathtub. Ordinary in every way, mundane as breakfast. In a moment I will invite members of the audience up to let you see this for yourselves.

“But for the monkeys it is also a magical object. It allows them to travel—no one can say where. Not even I—” she pauses; “—can tell you this. Only the monkeys know, and they share no secrets.

“Where do they go? Into heaven, foreign lands, other worlds—or some dark abyss? We cannot follow. They will vanish before our eyes, vanish from this most ordinary of things.”

And after the bathtub is inspected and she has told the audience that there will be no final spectacle in the show—“It will be hours before they return from their secret travels”—and called for applause for them, she gives the cue.

Aimee thinks Zeb might be a de Brazza’s guenon, except that he’s so old that he’s lost almost all his hair. She worries about his health but he insists on staying in the act. By now all he’s really up for is the final rush to the bathtub, and for him it is more of a stroll. The rest of the time, he sits on a stool that is painted orange and silver and watches the other monkeys, looking like an aging impresario viewing his
Swan Lake
from the wings. Sometimes she gives him things to hold, such as a silver hoop through which the squirrel monkeys jump.

No one seems to know how the monkeys vanish or where they go. Sometimes they return holding foreign coins or durian fruit, or wearing pointed Moroccan slippers. Every so often one returns pregnant or leading an unfamiliar monkey by the hand. The number of monkeys is not constant.

“I just don’t get it,” Aimee keeps asking Geof, as if he has any idea. Aimee never knows anything anymore. She’s been living without any certainties, and this one thing—well, the whole thing, the fact the monkeys get along so well and know how to do card tricks and just turned up in her life and vanish from the bathtub;
everything
—she coasts with that most of the time, but every so often, when she feels her life is wheeling without brakes down a long hill, she starts poking at this again.