Read At Your Pleasure Online 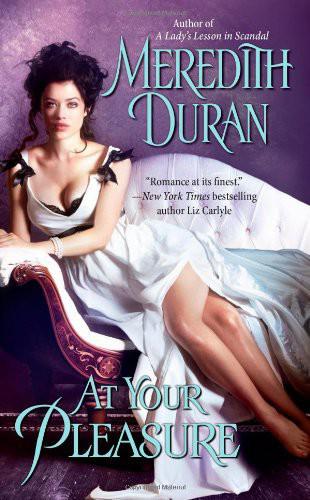 Glittering court socialites and underworld cutpurses alike know that Adrian Ferrers, Earl of Rivenham, is the most dangerous man in London. Rivenham will let nothing—not the deepening shadow of war, nor the growing darkness within him—interfere with his ambition to restore his family to its former glory. But when tasked by the king to uncover a traitor, he discovers instead a conspiracy—and a woman whose courage awakens terrible temptations. To save her is to risk everything. To love her might cost his life.

AT SWORDPOINT SHE DEFIES HIM . . .

Lady Leonora knows that Rivenham is the devil in beautiful disguise—and that the irresistible tension between them is as unpredictable as the dilemma in which Nora finds herself: held hostage on her own estate by Rivenham and the king’s men. But when war breaks out, Nora has no choice but to place her trust in her dearest enemy—and pray that love does not become the weapon that destroys them both. . . .

“Meredith Duran just keeps getting better and better.”
—All About Romance

MEET THE AUTHORS, WATCH VIDEOS AND MORE AT
SimonandSchuster.com
THE SOURCE FOR READING GROUPS

“Readers need to make room on their keeper shelf for the books of the talented Meredith Duran.”
—Fresh Fiction 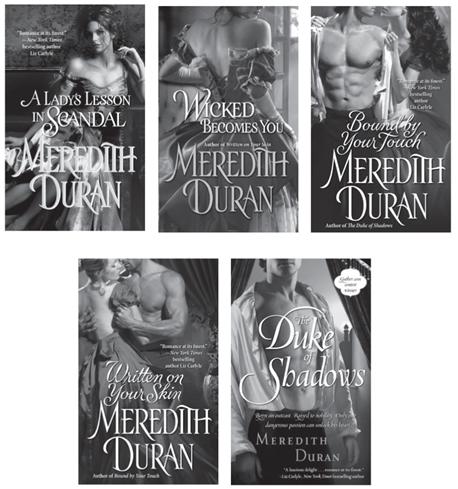 All available from Pocket Books 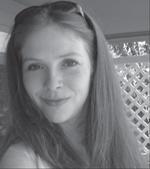 MEREDITH DURAN
blames Anne Boleyn for sparking her lifelong obsession with British history (and for convincing her that princely love is no prize if it doesn’t come with a happily-ever-after). She spends her free time collecting old etiquette manuals, guidebooks to nineteenth-century London, and travelogues by intrepid Victorian women. Her five previous novels are published by Pocket Books:
The Duke of Shadows,
which has reached a worldwide audience by being translated into eleven languages and was the winner of the Gather.com First Chapters Romance Writing Competition;
Bound by Your Touch
and its sequel,
Written on Your Skin,
chosen by All About Romance for its first inaugural book club meeting on Twitter;
Wicked Becomes You,
a
Romantic Times
Top Pick included on the
Woman’s World
list of Best Beach Reads for Summer 2010; and
A Lady’s Lesson in Scandal,
also a
Romantic Times
Top Pick as well as a Desert Isle Keeper for All About Romance.

A LADY’S LESSON IN SCANDAL
A July 2011 Top Pick of
Romantic Times
magazine and one of All About Romance’s Desert Isle Keepers!

“Compelling, exciting, sensual, and unforgettable . . . a nonstop read everyone will savor.”

“The fascinating and compelling characters, the vivid imagery and dynamic prose, the wonderful romance—it was all I can ask of a romance [novel.] Meredith Duran just keeps getting better and better.”

“Well-developed lead characters and a perceptive portrayal of a poor woman’s reaction to the lush lifestyle of the nobility highlight a top-notch romance.”

“So much fun. . . . Charming and deliciously sensual from beginning to end.”

“The book to beat for best historical romance of the year. . . . Sexy, inventive, and riveting, it’s hard to put down and a joy to read.”

“Remarkable. . . . Meredith Duran is one of the shooting stars of romance.”

“Everything a great historical romance should be.”

“A story that packs a powerful punch.”

“Evocative and enticing . . . a luscious delight.”

“Without a doubt the best historical romance I have read this year.”

All of Meredith Duran’s novels are available as eBooks

The Duke of Shadows

Bound by Your Touch

Written on Your Skin

A Lady’s Lesson in Scandal 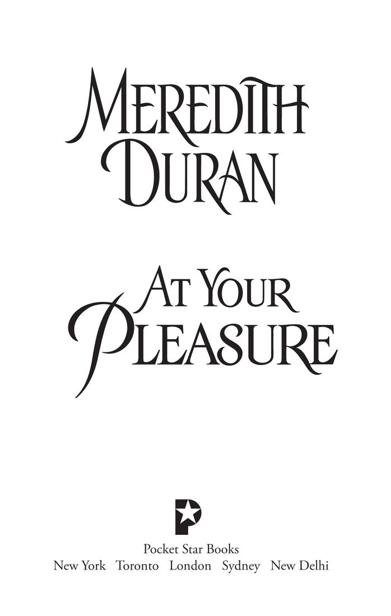 All rights reserved, including the right to reproduce this book or portions thereof in any form whatsoever. For information address Pocket Books Subsidiary Rights Department, 1230 Avenue of the Americas, New York, NY 10020.

Killer Z by Miller, Greg L.
Hollywood Punch by Brenda Janowitz
Abram's Daughters 02 The Betrayal by Unknown
Island of the Forbidden by Hunter Shea
The Lily (The Flowering Series Book 1) by Unknown
The Songbird by Val Wood
Las Christmas by Esmeralda Santiago
The Rebel Pirate by Donna Thorland
Our Brothers at the Bottom of the Bottom of the Sea by Jonathan David Kranz
Passager by Jane Yolen