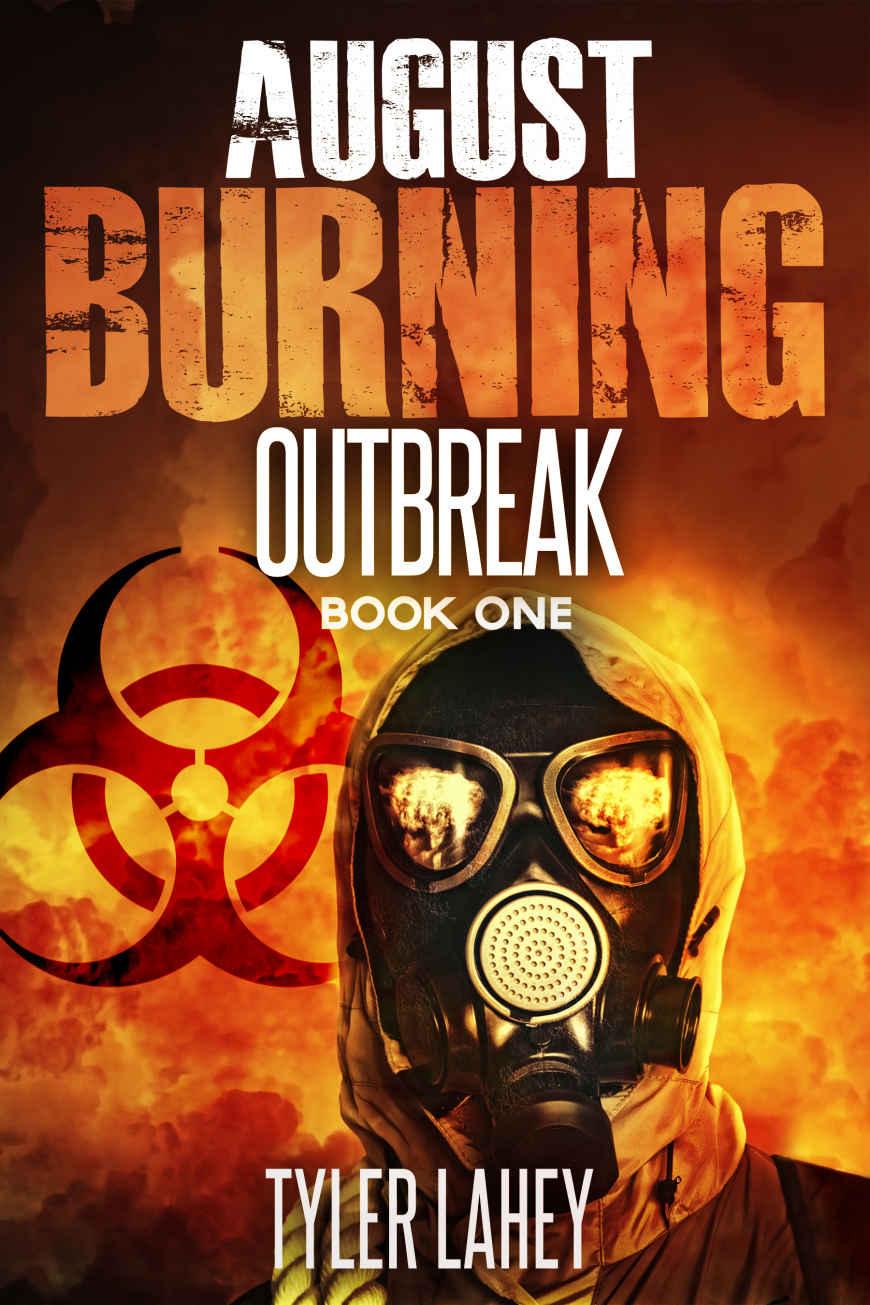 Jaxton heard one of the
guards yelp, and his head snapped around, to
the north. His bowl clattered against the roof of the Citadel where the chili’s
foul meat festered on the metal.

There,
against a mosaic of blues and yellows, a tiny flare arced into the sky. He
couldn’t yet process what it meant, even as the fear began whispering his name.

“What
outpost is that?” Jaxton demanded, resisting the urge to scratch the lice.

One
of his Rangers took a step towards the lip of the high school’s roof, a Wolf
patch emblazoned on his tattered camouflage. “North Ravines, I think. Liam’s
got…four Wolf troopers there.”

“What’s
the protocol for a blue and yellow?!” Jaxton snapped, furious he had forgotten.

Bennett
stepped forward, his face filthy and gaunt from four hundred days holding their
valley against the infected. Jaxton could scarcely recognize the man he had been
before the Outbreak. He felt the familiar unease as he friend drew closer; he
still hated his face. “They need reinforcements, but they can hold the ravine. The
Destrier has the ATVs, two of the horse carts, one pickup ready to go,” Bennett
declared.

“Another
one, Jax,” someone growled, from under shaggy, unkempt hair.

Jaxton
snapped his head around and saw a second flare, racing skywards to the south.
“The Bluffs,” he repeated, feeling the panic digging into him. “Adira’s there. How
many men can we get out right now? I need to get to those settlements.”

Bennett
spat off the side of the roof, sweat shimmering on his forehead in the late
August heat. “Give me one of the factions. Give me the Wolf. Let me save them,
and Adira.”

Jaxton
shook his head emphatically, “If you think I have learned to trust you again,
you are mistaken. Where are the other commanders? We need to plug those gaps
before the valley is overrun.”

Jaxton
slid his tomahawks into his cracked and broken thigh armor. He cast grey eyes
out to survey the walls of the rural valley that surrounded them, the valley
that they had called home for the past four hundred nights…and another lifetime
before that.

“There
are no commanders here, Jax. They’re in the field,” a woman with stolen US Army
regalia countered.

“Two
flares,” Jaxton forced a smile. “Nothing we haven’t handled before. Summer has
been kind to us. ” He could scarcely wait any longer. Shouldering Bennett’s
bony form aside, he jogged towards the ladders thinking only of glittering dark
eyes. Jaxton tugged his helmet into place and gripped the ladder with callused,
cracking hands. As he turned, he saw something snaking up between the
silhouettes of his brothers and sisters. Suddenly, his hands felt cold on the
metal.

“Black
and red...” he muttered aloud. As Jaxton remounted the three-story rooftop, the
survivors locked eyes festering with fear. A third flare’s vile smoke wafted
like a tower on the eastern horizon. No one moved, transfixed by the twin
pillars of smoke chasing each other higher and higher.

Bennett
drew in close, so Jaxton could see and smell the twenty-five year old’s rotting
teeth. “They’re being overrun. That’s three settlements under simultaneous attack.
We’ve never had three before at the same time. Never three.”

Jaxton
raced to the other side of the school’s roof, where the fields of vegetables and
weak crops struggled below. Standing between the old white lines from the
football field, dozens of survivors pointed at the sky. Memories of Friday
night lights flooded his head and he fought to return to reality. Jaxton turned
back to the ragged group of Citadel guards, with their old shotguns and
compound hunting bows. “Sound the alarm. Now. Full call-up. Get our reserves to
those settlements now, before they are lost.”

“Full-call up? We’ve never had a full
call up…five hundred survivors…that’s the Builders, the Wolf, the Destrier, the
Eagle-“

Jaxton
cut the fool short. “I know what it is damnit! Get everyone to arms,
now
!”

His
men raced to the ladders, gaunt figures in pitiful garb.

As
tiny figures raced across the fields below, the horns began to bellow in the
summer dusk. Three flares at once?

Jaxton
stopped halfway down the ladder, and forced himself to climb back up with
mounting dread. A lone silhouette stood against the fading summer sun. Bennett
turned, his lip twitching, and pointed to the western horizon.

“What
color is it?” Jaxton demanded, though in his heart he already knew.

Bennett
gulped, and slapped a fresh magazine into his pistol. “Black and red.”

Jaxton
froze, and heard shouting voices rising from the school below him. Within
several minutes, all the factions would be racing down the road, to hold the
valley against nature’s holocaust. He took a deep breath. His friends were
spread out all over the valley’s forest floor. “I need to hold the Western
ravine. It’s the largest. If those settlements fall, we’ll lose the valley. The
Lion is with me.”

Bennett
straightened his bony back. “Place your faith in me, as you once did in simpler
times. Let this be the hour. Give me something, and I will save her.”

Jaxton
crushed the anguish that was festering inside his gut. Where were his friends?
Where was Adira? There was no time. He drew from his pocket a patch.

Jaxton
drew his friend closer. “Bennett, this is it. The Horde is real. There could be
thousands, more than we’ve ever seen. Everything we’ve built, everything our
friends have died for…Take the Eagle. Stop the bleeding- Plug the gap.”

Bennett
clasped his friend on the shoulder, his grip firm. “For the Citadel. I’ll save
her, Jax. You won’t regret this.”

Jaxton
nodded sharply, and raced to the ladders to the wailing of desperate horns.

“Keep
fucking shooting!” Viera screeched. She fumbled with another arrow and cursed,
dropping it. Controlling her breath, she raised her bow. The sun’s demise cast
brilliant, dancing shadows on the ravine, and made it hell on her poor
eyesight. She paused over an advancing infected form, and released her fingers.
The arrow flew far wide, and she grasped her cramping arm. Viera sank to her
knees and scrambled sweaty fingers in her quiver. In despair, she launched it
against a tree, empty.

“I’m
out! Are you out!? I’m out!” Malcolm wailed, as the infected advanced over the
piles of their own dead. There had never been this many. Never. Where were the
men from the Citadel?

More
than three dozen bodies torn and bloodied bodies littered the ravine at random
intervals, prickled with colorful barbs. The closest laid no more than fifteen
feet away, their stench wafting on the breeze. A husky inhuman snarling filled
the ravine’s rocky embrace, and two more infected stalked into view, advancing
to a quick trot. Viera flung wild eyes to her flanks, where the other two
archers loosed another wild volley. They were hitting one out of every
three shots.

“Where
is the Lion?! Is there another flare? Fire another! Fire another god damnit!!” Malcolm
screamed, the veins on his narrow head bulging.

Viera
fumbled with the final cartridge in her rucksack, finally slipping it into the
tube. Raising it skyward, the flare gun belched. Twin pillars of red and black
smoke soared two hundred feet into the sky.

“They
should be here by now!!”

A snarling
infected woman closed within ten feet before she took a round through the
skull. Todd hefted his sniper rifle, slid the bolt back and loaded another
bullet. He shifted in his treetop hunting stand. “I’ve got three left,” he said
calmly, his voice drifting down from the perch.

“Malcolm,
look!” Viera pleaded. Malcolm wrenched his eyes away from the fore and his
heart pounded. There was another flare, several miles away to the south.
“There’s another! It’s the fucking horde!”

“We’ve gotta get outta here!” Malcolm screamed. He saw more
infected hastening down the chute, stumbling over the corpses of their allies a
stone’s throw away.

Malcom saw Viera drop her bow and run, even as he heard Todd
cursing her cowardice from his lofty perch. The sniper rifle cracked again, and
again. The other Wolf archers were gone, but the rifle snapped once more. The
weapon clacked: empty.

Todd cursed quietly to himself, twenty feet off the ground, as
he saw the final guard fleeing back into the valley. Todd shifted his hips,
annoyed at the painful metal seat. “They don’t make these damn things for
comfort, do they?” He looked up absent-mindedly, and saw the infected closing
to him. He grunted. The ravine had fallen. Squinting in the dusk, he saw the
stream become a river of rotting flesh.

His spine tickled at the sound of scratching, and he looked
below his metal stand, to the base of the oak. Four infected were dragging
their broken fingernails on the wood, their bloodshot eyes fixed on his own. He
chuckled. The ladder was right beside them, but their diminished mental
faculties could not comprehend its usage. Todd leaned back, and waited for the
cavalry to arrive as more and more infected stumbled into the valley. The Lion
would handle these, Todd knew. Jaxton had never failed them before, not for one
night in four hundred.

There were fireflies in the air when they came. Todd awoke with
a start, to the roar of men. Angry men, armed with iron and steel.

Todd sat up quickly, knocking his sniper rifle off the tower. He
watched it fall with amusement, but his heart skipped a beat when he saw the
infected. There were at least fifty, all crowding around his tree, clambering
over one another like one celled organisms with no awareness of their fellows.
It was a giant, seething mass of rotten meat, fluid, and bone that reeked in
the cool summer air, spoiling its natural magic.

Towards this mass, his brothers advanced. He could see them
advancing now, in a tightly packed line. They chanted rhythmically as they
walked, letting only trees break their formation. Five men held great torches
aloft, behind the unbroken line of heavy riot shields. Todd could see their
faces, masked and goggled, peering out in the shield’s little square glass
windows. The chanting grew louder, and it awoke the summer forest.

The infected below the tower turned to meet this new food
source, and clawed at each other gleefully, in a sickening attempt to reach the
survivors first. The first several infected hit the riot shield line, but the
wall did not stop- it rolled over them. Makeshift spears fastened to heavy wood
lashed out from over the line, striking the infected in their path. As these
fell, the riot shielders crushed them underfoot with heavy steel-toed boots. As
a guaranteeing measure, a line of men at the very rear hacked into each corpse
with wood-axes, splitting their necks.

The First Days: As the World Dies by Rhiannon Frater
The Woman who Loved an Octopus and other Saint's Tales by Imogen Rhia Herrad
Paxton and the Gypsy Blade by Kerry Newcomb
Personally, I Blame My Fairy Godmother by Claudia Carroll
0449474001339292671 4 fighting faer by Unknown
Never Walk in Shoes That Talk by Katherine Applegate
Les Norton and the Case of the Talking Pie Crust by Robert G Barrett
Stirred with Love by Steele, Marcie
Beyond the Veil of Tears by Rita Bradshaw
Scarleton Series I : Before the Cult by Sandy Masia