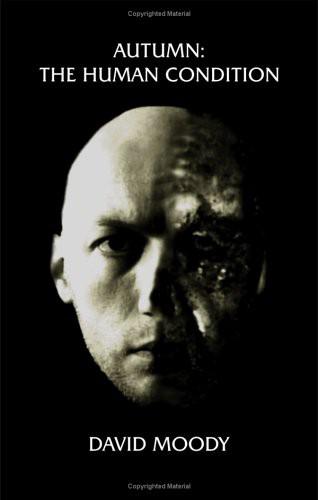 This book is a work of fiction. The characters and situations

in this story are imaginary. No resemblance is intended between

these characters and any real persons, either living or dead.

This book is sold subject to the condition that it shall not, by

circulated without the publisher's prior consent in any form or

without a similar condition including this condition being

A catalogue record for the paperback edition

of this book is available from the British Library

AUTUMN: THE HUMAN CONDITION is a companion book which brings to an end the AUTUMN saga. As well as presenting a number of new stories which take place in the AUTUMN world, the book also details the advent of the infection from the perspective of a number of individual characters who appear in AUTUMN, AUTUMN: THE CITY and AUTUMN: PURIFICATION. An appendix at the end of this book explains each character's involvement in the story. Earlier versions of some of these brief background stories were originally released as AUTUMN: ECHOES.

THE HUMAN CONDITION also expands on the events of PURIFICATION. It is recommended, therefore, that the original series of novels be read before this book.

Thanks to all the readers of the AUTUMN story for their enthusiastic and continued support.

Eight months ago Jake Humphries and his family immigrated to Canada from the United Kingdom. A regional manager for a global finance house, Jake agreed to move his family overseas for a well paid two year posting. His wife Lucy and their two children settled quickly into their new surroundings. The people who found it hardest to adjust were those they left behind. Polly Humphries � Jake's well-meaning but highly strung and over-sensitive mother � still finds the distance between her and her son difficult to deal with. Mrs Humphries and her husband made their first visit to Canada several weeks ago. The trip did nothing to reassure the old lady. If anything it has made her more neurotic. Jake has grown to dread the weekly telephone calls from the UK. His mother usually phones on Saturdays. It is now the early hours of Tuesday morning.

`Apart from being tired because it's gone midnight and I'd only just managed to get to sleep I'm fine. We're all fine. Why shouldn't we be?'

`Heard what? Christ, Mum, it's the middle of the bloody night. I haven't heard anything.'

`There's no need for the language, Jake, we were just worried about you, that's all.'

`Are you far from Vancouver ?'

`It's on the other side of the country. It's thousands of kilometres away, why?'

`Because something's happened there.'

`What do you mean? What's happened?'

`I'm sorry, love. It's just that you're all so far away from us here and we worry about you.'

`What are you doing up so early?'

`Your dad couldn't sleep. You know what he's like, once he's awake that's it. And once he's up and about I can't relax. He woke me up with his shuffling and his moaning so we both got up and came downstairs. We were watching the news and...'

`And what exactly is it that's supposed to have happened in Vancouver ?'

`They're not sure. No-one's saying very much. No-one seems to know very much yet.'

`So you've woken me up to tell me that no-one knows very much about what's happening in Vancouver ? Come on, Mum, I've got an important meeting first thing tomorrow and I can't afford to...'

`No. Listen, son, something's happened there but they don't...'

`Well give me a clue then. Has there been an accident or a bomb or...?'

`I don't know. I heard something about a bomb but they've stopped talking about that now.'

`So why have you phoned me in the middle of the night? This isn't little old England , Mum. This place is bloody huge. Just because something's happening in the same country doesn't mean it's going to affect...'

`I'm phoning you because they've lost contact with the city, and all the places surrounding it.'

`What? What do you mean, they've lost contact with it? Vancouver is a massive city for Christ's sake. There are thousands and thousands of people there. Millions. You can't lose contact with millions of people just like that...'

`You can't lose contact with a whole bloody city, Mum.'

`Jake, your father and I may be getting on but we're not stupid. I know what I'm watching. It's the news and it's real. We're sitting in front of the television right now. Your father's next to me. I'm only telling you what we've heard, and I'm only telling you because we're concerned about you, Lucy and the boys.'

`So tell me again exactly what it is they're saying.'

`Your dad says put your TV on, son. You're bound to have some news where you are. You're much closer than we are.'

`Can't get a picture on some of the channels. Cable must be down. Sometimes this happens when...' `What about the radio? Try your computer. Try the Internet.'

`Hang on, here's something.'

`What are they saying?'

`Christ, it's just like you said, they've lost contact with the area around... Hold on, you said Vancouver, didn't you Mum?'

`Because the station I'm watching here is talking about Winnipeg. That's miles away. And Seattle, and Portland. They're talking about a massive part of the country. Bloody hell, what's going on here...?'

`Are they saying anything about what's happened, Jake? Do they know why...?'

`Where are Lucy and the boys?'

`You should lock your doors. Don't answer the door if anyone comes. Wait until we know what's...'

`What's the point of locking the door? Mum, this isn't anything to do with...'

`Nothing. Thought I heard something, that's all.'

`Something's happening on the other side of the river. There's a fire. It looks like something's gone into the front of one of the buildings on the waterfront by the... Don't know what's going on. I can't see much from here... Hang on a second and I'll try and... Shit, that's all I need, the kids are awake now. Bloody hell. Lucy, could you go and...? Lucy...? Honey, what's wrong?'

Over five thousand miles away, Mrs Humphries listened helplessly to the muffled sounds of her son, her daughter-in-law and her two grandsons choking to death. Within hours both Mrs Humphries and her husband were dead too.

Amy Steadman is a twenty-four year old graduate who is the manager of the lingerie department in an exclusive women's fashion boutique located in a busy out-of-town shopping mall. She lives on her own in the town of Rowley in a small one bedroom flat above an antiques shop on a narrow road just off the main high street.

It's five-thirty in the morning. Amy's alarm has gone off, and she's just dragged herself out of bed.

This morning Amy has to make her quarterly sales presentation to the company's senior management team. She dreads these presentations. She doesn't have a problem with standing up and talking to these self-important, vacuous, grey-suited people, she just doesn't feel comfortable with the way they stare back at her. They are smarmy, lecherous old men and she can feel them undressing her with their eyes. She hates the way they don't listen to anything she says, instead they just watch her. She knows that they fantasise about her. She finds their unwanted interest and their cheap, double-entendre laden conversation offensive and unnecessary but she puts up with it. It's all part of the job.

In Amy's line of business appearance is absolutely everything. She walks the shop floor as a representative of the store and the numerous expensive labels it stocks. She knows that she must be perfectly coiffured and immaculately presented at all times. Customers directly associate her with the products she sells. The better she looks, she often thinks, the more chance she has of making a sale.

After a quick breakfast (she doesn't feel like eating much this morning) and a lukewarm shower (she needs to get a plumber in), Amy dries her hair and sits down in front of the mirror to apply her make-up. An exercise in precision application, the make-up is crucially important to her. Far more than just another part of her perfect appearance, it is a mask. She is painting on her work personality and her customer-facing smile. In fifteen minutes she creates a character far removed from the real Amy Steadman who sits in front of the television most nights, eating chocolate and relaxing in old jeans and baggy jumpers. More importantly, perhaps, the face becomes something she can hide behind. The senior managers who stare and leer at her see only the fixed smile, the white teeth and the flawless complexion. They are unaware of the disinterest and contempt she keeps hidden from them.

Renegade by Caroline Lee
Harrowing Hats by Joyce and Jim Lavene
Downcast by Cait Reynolds
The Dream of My Return by Horacio Castellanos Moya
Cherry Crush by Burke, Stephanie
Miracle in the Wilderness by Paul Gallico
Bedding The Best Man (Bedding the Bachelors Book 7) by Virna DePaul
Seize the Fire by Laura Kinsale
Dying on Principle by Judith Cutler
A Scandalous Melody by Linda Conrad