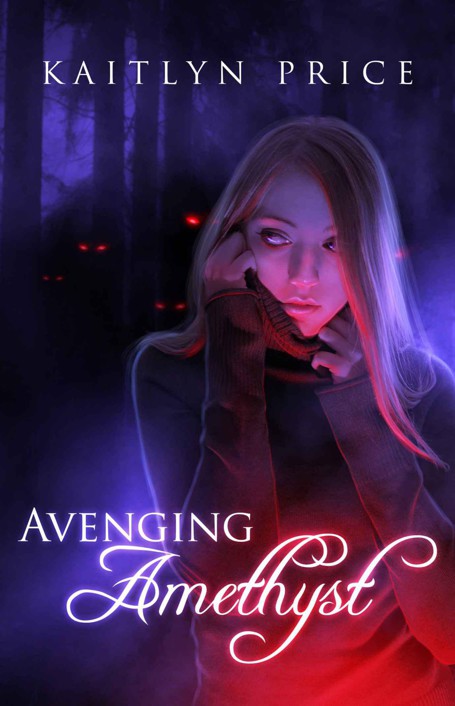 I would like to dedicate
this book to my wonderful family and friends.

I froze in the
doorway to my mom’s hospital room. A tall woman with long auburn hair
stood above my mom’s bed. The woman looked at me, smiled cruelly and
twisted my mom’s neck before I had a second to comprehend what happened.
The cracking sound rang through my ears almost louder than the flat noise
coming from the machines, signaling my mom’s heart had stopped.

What happened
next was such a blur that I’m surprised I remember it at all. The woman
with the auburn hair disappeared into a cloud of smoke that escaped into one of
the nearby vents. I stood frozen until I heard the little voice inside my head
telling me to get out before anyone came to check on my mom. She had warned me
that if anything strange happened to her, I needed to flee as quickly as
possible.

I ran out of the
hospital, rushing to my car and speeding out of the parking lot so quickly that
the nurses were probably just now getting to my mom’s room. What they
would find would be as much of a shock to them as it was to me.

Two days ago my
mom was in a car crash that left her in a coma. According to the doctors, she
was improving and her chances of making a full recovery were good. I
didn’t know how they would be able to explain that she died from a broken
neck.

I didn’t
let my emotions catch up to me until I pulled into the driveway of my house a
few minutes later and shut my car off. That’s when the hysterical crying
started. I couldn’t breathe and the tears flowed out of my eyes so fast
they made a wet spot on my shirt. I laid my head against the steering wheel and
let my emotions run rampant.

I couldn’t
believe what I had just witnessed, yet deep down, I had a feeling that it was
going to happen. My mom and I had been on the run my entire life, never staying
in the same area for more than a few months and never staying anywhere near
busy cities, preferring the more secluded areas, like the countrysides in
Nebraska, Kansas and Wyoming.

When I was old
enough to start asking questions, my mom would always give me the vaguest
answer:
They’re after us. They’ll always be after us.
She
never explained who ‘they’ were or what they wanted.

A week ago on my
eighteenth birthday, my mom gave me a key to wear around my neck. She told me
that if there was a day when she wasn’t around that I would need it. The
one thing she always brought with her, no matter where we went, was a small
locked trunk. She never let me near it or explained what was inside but I knew
that the key would open it.

My instincts
were telling me that I needed to grab my mom’s trunk and get out of town.
I could feel that something was coming for me but I felt no desire to drag
myself out of my car.

My mom was dead.
She was my only family and the only person I had ever been close to my entire
life. Since we moved around so much, my mom home-schooled me. I never made any
friends and I was barely allowed to talk to any of the neighbors we lived next
to. My mom kept me closed off from most of the world and now I was completely
alone. I didn’t even know if I had any other family, or if they would
even know I existed.

The tears still
streamed down my face when I took a few deep breaths and forced myself out of
my car. The bad feeling in my gut got stronger and I knew I needed to hurry. My
mom always told me to trust my gut, even if it meant leaving her behind.

I slowly walked
up the steps to the front door, turned my key in the locked and saw something
move out of the corner of my eye. My head shot in the direction of the
movement, by a small group of trees that blocked us from our neighbors.

It was dark out
and I couldn’t see anything in the shadows. My head started to ache and I
knew the threat was getting closer.

I ran inside,
shutting and locking the door behind me. I went to my room first, throwing some
clothes in the backpack I always kept out and grabbing the few items I always
kept with me. We didn’t have very many possessions. My mom knew
we’d just have to leave most of our stuff behind every few months. The
only items I always took were clothes and a few personal items. I wasn’t
attached to anything else and could always buy new essentials.

After I had all
of my items in my backpack, I slung it over my shoulders and rushed to my
mom’s room. She usually kept the trunk out of plain sight but there
weren’t very many hiding places in our tiny house. I went straight to my
mom’s closet, threw back the clothes she had hanging up and spotted the
trunk tucked away in the corner.

I knelt on the
ground, pulled the chain off of my neck that held the key and opened up the
chest. I didn’t have the time to go through it completely but I had to at
least open it.

My eyes widened
in shock, when I pulled the lid open. Dozens of thick stacks of hundred dollar
bills sat on top of the secrets buried deep in the trunk. I knew my mom had to
have money in order for us to move around so often, but I never knew how much.
I hesitated just long enough to touch one of the stacks, needing to confirm
they were real, before I slammed the trunk close again and locked it up.

I took another
deep breath, forcing myself not to cry and picked up the trunk. It wasn’t
heavy but it was awkward to hold with it being wider than my arms could handle.
I carried it out of the house, stumbling slightly down the steps and threw it
into the seat next to me as I got in the car. I didn’t even bother to
lock up the house. I knew I would never be back to it.

I turned
my car on and put it into reverse. The movement from the trees was back and I
could see shadows forming in the darkness. Fear almost outweighed my pain and I
reversed out of the driveway, my tires screeching, as I drove off in a cloud of
smoke. I looked in my rear view mirror, expecting to see a car pull out behind
me, but headlights never appeared.

I didn’t
let out a sigh of relief until I was on the highway a few miles from my house.
But with that sigh of relief came more tears. I desperately wanted to turn
around and floor it back to the hospital, just to check on my mom again. Maybe
I had hallucinated the whole thing.

But I kept
driving. I knew the truth and I had to keep myself alive. My mom would be so
disappointed in me if I got myself killed after she spent the past eighteen
years keeping us safe.

I drove until I
couldn’t keep my eyes open. I had no idea where I was going and the sign
I passed told me I was in Jackson, Wyoming when I pulled off the highway nearly
six hours after I left my house. I found the closest, cheapest looking motel
and checked myself into a room, begging the attendant to let me pay with cash
and putting it under a fake name just in case. If I was going to keep myself
alive, I needed to sleep and I hoped the motel would be safe enough.

I half carried,
half dragged the trunk to my room, planning on going through its contents after
a few hours of sleep. I considered keeping it in my car but I worried that the
reason my mom and I spent our lives running might be inside of it. I
didn’t want whoever was after me to go breaking into my car. I would keep
it as close to me as possible.

The motel room
was small and dingy, with the faint smell of smoke and mold, but it had a bed
and that was all that mattered right now. I took my shoes off, and crawled onto
the squeaking mattress. At least the sheets smelled fresh, and I breathed in
their scent when I plopped my head on the pillow. The clock told me it was
after midnight and sleep quickly pulled me under.

And into one of
the horrible nightmares that had been plaguing me the past week.

I was walking in
a forest, holding hands with a ball of light. I knew it was a person, but
anytime I looked in its direction, I was blinded by the brightness. It was also
magnificent, taking my breath away by its sheer beauty.

During our walk
I could see shadows moving between the trees, staring at us, but I wasn't
scared of them while I was with the ball of light. I felt like it was
protecting me.  Then everything would change so quickly. The shadows would
attack the light, engulfing it. I would panic and try to fight them off but
they would get me, too, and start suffocating me.

That’s
normally where the dream would stop, but this time the sound of someone
screaming pulled me further in. I fought my way out of the shadows and made my
way towards the scream. I knew it was my mom before I made it to a small
clearing in the forest.

I expected to
see the woman that murdered her, but instead there was man crouched over my
mom’s body. His blonde hair was thick but wispy and his square face gave
him a stern look. What really made him stand out was the eerie way his eyes
glowed red. He looked at me, sending a chill down my spine.

Brother to Brother: The Sacred Brotherhood Book I by A.J. Downey
Dominated by the Librarian #1: 'Surrender to your Desire' (Male submission erotica) by Jones, Tara
Lorraine Heath by Texas Splendor
The Dark Side by Damon Knight (ed.)
Secret Destiny: Sins of Odyssey Book 1 by Kathy Kulig
Don't Look Behind You by Mickey Spillane
Tangled Vines by Bratt, Kay
Einstein by Philipp Frank
Wake: A Novel by Hope, Anna
Alana by Barrie, Monica