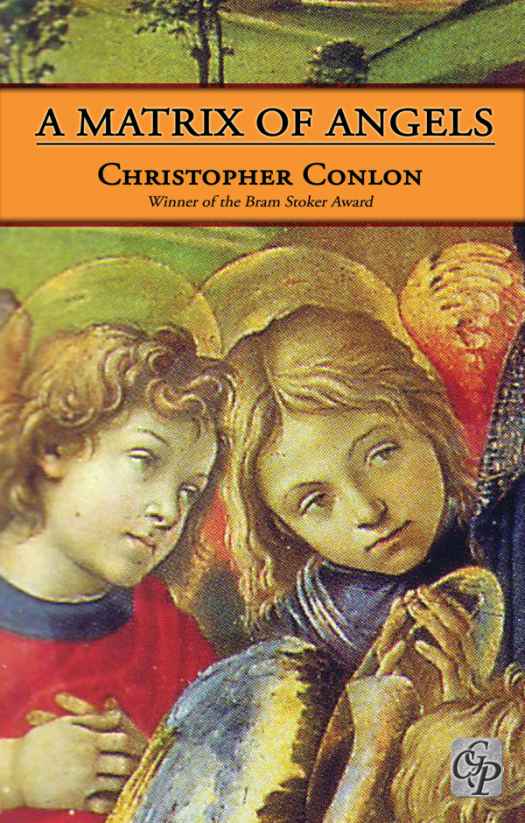 Gilbert and Garbo in Love

Midnight on Mourn Street: A Play in Two Acts

A Sea of Alone: Poems for Alfred Hitchcock

He Is Legend: An Anthology Celebrating Richard Matheson

A MATRIX OF ANGELS

All rights reserved. All characters appearing in this work are fictitious. Any resemblance to real persons, living or dead, is purely coincidental.

This book is also available as a limited edition hardcover and in trade paperback editions.

“A Matrix of Angels”: The Original Short Story

nothing which we are to perceive in this world equals

the power of your intense fragility:whose texture

compels me with the colour of its countries,

rendering death and forever with each breathing

…a child’s major attention has to be concentrated on

how to fit into a world which, with every passing hour,

reveals itself as merciless.

IN MY DREAM Lucy Sparrow stands facing me in the night surf, fists on her hips, waves bursting softly about her thighs, looking much as I remember her at twelve when the two of us were best friends forever: blood sisters. She wears no bathing suit, but isn’t exactly naked; instead her body appears featureless, like a doll’s, lacking nipples or navel, freckles or scars—incomplete, unfinished. Yet her face is as it was in life. The big raincloud-colored eyes, the shapeless nose, the tangled dirty-blonde hair splayed to her shoulders.

Little happens in the dream. She just stares at me, her expression flat, unreadable—neither friendly nor hostile—while from the shore I whisper over and over, a hot ache pulsing in my throat:
Lucy. Lucy.
But a sudden shriek overhead (a bird? a bat?) makes me flinch reflexively and I glance up in fear.

By the time I look toward her again, I’m alone in the darkness.

As I spiraled slowly toward wakefulness I turned, as I always did, to drape my arm over Donald, and was momentarily perturbed, as I always was, to find that he wasn’t there. It had been two years since we’d shared a bed, yet my semi-conscious habits hadn’t changed. I’ve read that amputees react the same way, still believing in the minutes before reality comes hammering over them that their severed limb is attached, healthy, perfectly normal. And then they wake up.

The room was strange. For a moment I didn’t see it as a room at all, but rather as a disconnected array of random, anonymous components: desk, lamp, mirror, curtain. I had to shake my head and lift myself onto my elbows to recall that I was in a mid-priced sort of hotel in a small town called Quiet. Quiet, California, where I’d lived for some months as a girl but which was never, never home.

Depression is wonderful for sleep—for mine, anyway. It takes me into the deepest of all possible slumbers, where there’s no light, no sound, no sensation, and no desire for them. Fifteen hours straight, sometimes. The only trouble is that upon waking I’m not refreshed in the least; it’s almost as if I hadn’t slept at all. It was that way now. I felt like dropping back to the pillow again, pulling the starch-stiffened sheets over my head and falling away from the world once more. After all, I reasoned, I was on no set schedule; the book festival in Santa Barbara had ended the day before and I had several days entirely to myself. No one needed me anywhere for anything. I was free. And so the pull of the pillow, the sheets, the warm blankets was overwhelming.

Still, I managed to sit up, stretch, wipe the muzziness from my eyes. And as I sat there, vaguely aware of the sunlight glowing through the hotel room curtains, I realized to my amazement that I had dreamed.

I never dream. I haven’t since I was a child. Some brain researchers claim we all do, but that a small percentage of people like me simply don’t recall them—well, it may be. What I know is that I’d never in my adult life had a dream that I remembered upon waking. The night before, for the first time, I’d had one. About Lucy.

I breathed slowly, wondering. Lucy Sparrow, of whom—until last week—I’d not had a conscious thought in thirty years. A figure I’d hurled into the black waters of oblivion three decades before. An intolerable memory. Lucy Sparrow.

I’d been sitting in my study—I work from my home, in Tucson—going over final arrangements for the festival on my laptop, re-confirming my hotel reservation and schedule, when it occurred to me that Santa Barbara wasn’t all that far south of a place I’d once lived, however briefly, when I was twelve years old. How long had it been since I’d given a moment’s thought to Quiet, California? And yet as soon as the name came back to me I knew that I would drive there after the event. Just to look. To see. To walk those streets again. It would be the opposite of a sentimental journey; to think of that period of my life brought me only hazy, reverberating pain, like an ancient wound freshly prodded. But I’d survived it—all of it. Quiet, California held no terrors for me. Or so I told myself.

Even then, while making new reservations and plotting my route, I didn’t really think of Lucy. If she crossed the landscape of my mind at all it was only glancingly, a long-forgotten figure of no greater importance than other girls I’d known whose names now came easily back into my consciousness: Melissa Deaver, Susan Roselli, Miriam Doyle. The teachers, too. Mrs. Petrie. Mr. and Mrs. Lowther, the young couple. The principal, Mr. Blatt. And the people I lived with then, the mysterious Aunt Louise and Uncle Frank to whom I’d been shuffled off inexplicably in the middle of a rain-splintered night.

All thirty years gone. I was a grown woman now with an excellent career, a mortgage. My marriage had failed, and my daughter and I rarely spoke, but I was a success by most standards. Yet I felt like something else, something that made me want to collapse back into the bed and hide myself away.

Donald, please have Jess come to the phone.

I’ve tried, Frances. She refuses. I can’t physically drag her.

I have a right to speak to my daughter, Donald!

Your daughter is in her bedroom crying, Frances.

I threw my legs over the bed, determined to stand. It was puzzling that I was nude; I’m not in the habit of sleeping nude. No one was with me, certainly. But then I noticed the bottle of Calvert’s whiskey on the side table, the partly-full glass, the bucket of water which last night had likely been ice. It came back to me, dimly. I’d decided, after an hour or two of TV and drinking, to take a shower, but had fallen asleep instead…

Passed out,
my mind amended.

Of course I’m aware of the irony: a melancholic divorcee with a drinking problem and a daughter who doesn’t speak to her making her living—and it’s a good living—as a creator of children’s books. What would the second-graders of the world think, I wondered, if they could see me now—the celebrated lady who wrote and illustrated the stories of Flat-Head Fred and Mary the Motor Scooter?

I noticed that I’d left one of my titles,
Mary’s Trip to Muffin Land,
on the side table, its back cover facing up. There I was in a little photo in the corner, full color, an attractive but somewhat hysterical-looking woman wearing too much makeup (what
had
I been thinking with that eyeliner?) and obviously fake blonde highlights in her otherwise nondescript, practically colorless hair. What saved the image was the smile, all dimples and glossy lips and big shining teeth. People often refer to my smile. Even the man who’d introduced me at the festival used the old cringe-inducing “lights up a room” line about it. I could observe that quality in the cover photo, but it seemed to have nothing to do with me. What I mostly saw when I looked at that picture was a woman who was hiding—behind makeup, hair dye, a “dazzling” smile, but hiding just as surely as I wanted to hide now, by throwing the bedclothes over myself and sinking back into oblivion.

I have visitation rights, you know, Donald.

No one has stopped you from visiting with Jess.

Yes, under your watchful eye, right? Like I’m some kind of criminal!

I poured half an inch of last night’s libation into the glass and tossed it back. Then I stood, determined to face the day like any other grown-up person. I showered, threw on jeans, T-shirt, sneakers—it was a lovely spring day, warm, sun-rich—and, after munching on an apple and banana I’d brought with me, headed downstairs, through the lobby, and out into the town of Quiet, California.

I’d not really seen it the night before. I’d arrived late, tired from the festival (all those mothers beaming at the celebrated Ms. Pastan, thanking me for getting their children interested in reading) and the drive. I’d done nothing but go straight to my room after checking in. But now here I was, on streets I’d not walked since I was twelve years old.

It would be nice to report that a bracing wave of nostalgia overwhelmed me immediately, but the fact is that I recognized nothing I saw. I crossed the parking lot and peered up and down the four-lane road before me (its creative name was “Main Street”) and tried to think of what had been here thirty years earlier. But in the face of the traffic—there was a tremendous lot of it for what was supposed to still be a small town—and the shopping center across the way with its Burger King, its Starbucks, its K-Mart, I couldn’t think. Of course it didn’t help that I’d not lived here long; in terms of time, Quiet represented hardly a feeble dot on my personal radar screen, even if in memory it occupied a much larger (if unvisited) space. Yet I knew I would remember if I could simply get my bearings, so I turned back to the hotel office for a map of the town.