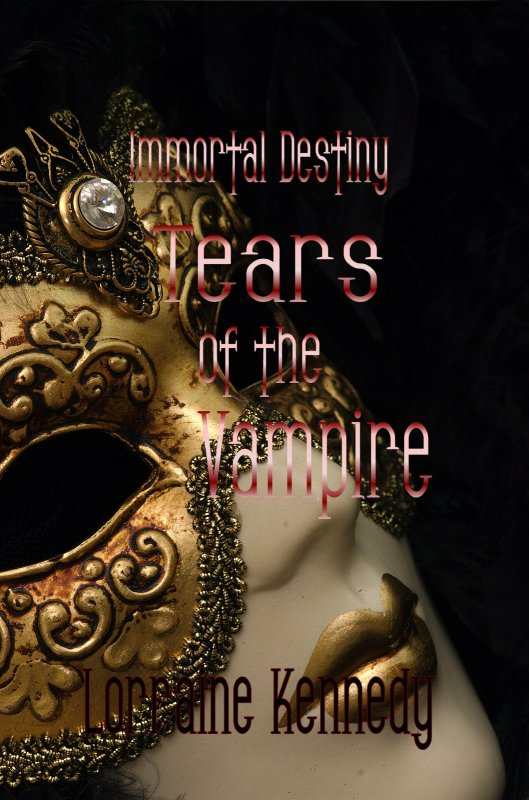 Tears of the Vampire

This is a work of fiction. All characters, events, and places are of the author’s imagination and not to be confused with fact. Any resemblance to living persons or events is merely coincidence.

Other Titles by Lorraine Kennedy

Book 4 -Tears of the Vampire

Realm of the Wolf Series

Song of the Annunaki

Every second of her existence - from the inception of her soul to the instant she’d taken her first breath - had been for this moment. She was consumed by darkness. Her obsession for his deadly - piercing eyes - his vampire eyes, had driven her beyond reason.

Kathrina’s eyes flew open, but the glare of her bedside lamp forced her to close them again. The Book of Anu lay on her lap, a reminder of the disturbing dreams that plagued her sleep. Within the pages of the journal were the words of an ancient and mysterious vampire - a vampire that seemed to hold an unfathomable power over her dreams.

The dream was unsettling, but it was her longing for this vampire that really troubled her. While she was in that dream world, nothing mattered but the feeling of him touching her - and experiencing the sensation of the vampire sinking his fangs into her flesh.

Rubbing the sleep from her eyes, Kathrina picked up the heavy book and pulled out several pieces of loose paper from between the pages. The journal was written in an ancient language that she couldn’t read, and unfortunately the translation wasn’t complete. Nevertheless, she continued to study the vampire’s words, but no matter how many times she read the few pages that had been translated, she couldn’t find a single clue that would tell her who he was.

None of it made any sense. There was obviously a lot of information about the immortals that had been kept hidden away, and the partial translation didn’t shed much light on those secrets. Laying the pages aside, she began flipping through the book. Despite the fact that she couldn’t understand the writing, she felt compelled to stare at the faded words. They almost appeared to be written in blood.

Again there was that familiar revulsion, but she still could not banish the feeling of fascination that crept over her. While turning a page, she felt a sharp sting on the side of her finger. She pulled her hand away from the book and was startled to see blood oozing from her fingertip. A small drop of crimson fell onto the page.

Kathrina panicked. Now they would know that someone had been reading the book. She need not have worried. The brown parchment absorbed the blood and a moment later it was completely gone. She stared at the book in astonishment.

The vampire awakened suddenly - his shimmering eyes cutting through the darkness within the casket. Even from his deepest slumber he’d sensed her blood calling to him. For the first time in thousands of years, he felt heat spreading through his body, chasing away the perpetual chill of the grave. His years of waiting had not been in vain; finally he had found what he needed to end his curse of darkness.

With one hand, he effortlessly pushed open the heavy coffin lid and sat up from his bed of satin. The calling grew more intense and his head began to ache. He wondered who she was, and if the girl knew that she would soon sacrifice her life so that he could again live in the light.

It didn’t really matter. He had waited too long to ignore the call of her blood - blood that would end the disease that had consumed his being for longer than mankind had existed. Her coming had been foretold long ago, and she belonged to him.

The fluid movement of color and array of bizarre costumes gave the scene a surreal - almost ominous overtone. In the distance she thought she caught the twanging sound of a banjo over the buzz of the crowd. The chilly night air seemed to be charged with energy, but all of the excitement could not dispel the feeling of doom that had crept over her.

Though they hid behind brightly colored masks, she could feel their presence - their hunger. They were out there - ready to feed on unsuspecting revelers. Once, Kathrina thought she saw the radiant eyes of an immortal, but when she looked back the vampire was gone.

She pulled her coat tightly around her, but still could not dispel the cold.

Across the street, two women in skimpy costumes stepped out to a second story balcony and began tossing plastic beads to the people on the street. Unexpectedly, she found herself in the middle of a frenzied crowd. Kathrina was pushed roughly aside when a large - burly man moved passed her and jumped into the air to retrieve a string of beads.

She continued walking, pressing through the throng of people. More than once Kathrina was nearly trampled, but she pushed through the crowd and kept moving. It wasn’t far now - maybe a block or so and she would be out of the worst of it.

The professor would be there, waiting for her and probably thinking that he’d been stood up. Kathrina hadn’t counted on the crowd being so large, but the mistake was understandable, considering that it was her first Mardi Gras.

It seemed an eternity before the masses of people began to thin and she could walk down the street without being shoved, or in danger of being trampled. The scent of Creole delicacies hung in the air, making her stomach growl with hunger. She pushed her craving aside and moved on.

He would be waiting in the alley, near the back entrance of the club where they’d agreed to meet. The TradeWind was a popular nightclub with the working class. Kathrina had purposely selected a place far removed from the New Orleans goth scene so there was less risk of being noticed. She knew that the vampires would likely be busy hunting among the multitude of people that had gathered in the city for the festivities, but something just didn’t feel right.

She was a born vampire, and thanks to the DNA she inherited from her father she could sense things that most humans couldn’t. All night she’d felt danger. It was out there hiding within the darkness - stalking her.

Nicole and Sarah had warned her not to go out tonight, but Kathrina was confident that she’d be safe among the crowds of people. Her sisters worried about her because she was the youngest, but Kathrina could take care of herself. It was her family that she was concerned about. Her father’s brother was their biggest worry. Omar would love nothing more than to kill all three immortal sisters. Kathrina could not help but worry that her sisters may not have the strength to go against the ancient vampire.

Of course there were other threats to her family, and all people on earth. The Book of Anu hinted to this, which is exactly why it had been necessary for her to go out during Mardi Gras, despite the danger.

Professor Klieg was the local authority on ancient languages. He’d agreed to complete the translation, but it had been necessary to leave the book with him. That had been two days ago. Today he’d called and insisted that she meet him right away. Kathrina had thought it would be okay to venture out. She was sure Omar’s followers would be too busy to bother with her tonight, but maybe she’d been wrong.

Kathrina glanced over her shoulder before turning down the alley. It didn’t appear as if anyone was watching her, though even if someone were, she probably wouldn’t see them. A vampire would not be so obvious.

The alley was dark compared to the main streets, but a nearby streetlight provided some illumination. It also helped that she could see exceptionally well in the dark, another gift from Donavan, her vampire father.

Entering the alley, Kathrina winced at the sound of her footsteps echoing loudly through the empty street. Nearing the back entrance of the TradeWind, she saw that the professor was not there waiting for her like she thought he’d be. Kathrina paused, something was wrong.

The professor had insisted that she meet him as soon as possible - it didn’t make sense for him to be late.

Moving cautiously toward the entrance of the nightclub, her eyes scanned the darkness. Kathrina had to bite her tongue to keep from screaming when a rat scurried out from beneath a dumpster.

That’s when she noticed a shoe near the large metal trashcan. As she moved closer, she saw that the shoe was attached to a leg. Holding her breath, she peeked around the dumpster. Her hand flew to her mouth in an effort to cutoff the scream that threatened to tear loose from her throat.

Professor Klieg was sprawled on the ground, his throat torn open like he’d been attacked by some kind of animal, but she knew better. It was the classic cover up for a vampire killing.

Though Kathrina knew she wouldn’t find a pulse, she checked anyway. He was dead, but his body was warm. It was possible that the vampire was still nearby.

Her eyes scanned the surrounding darkness, but she detected no movement. Turning her attention to the blacktop near the body, she searched for the book. It was gone.

Riddled with guilt, she brought her hands up to cover her face. The book was probably the reason the vampires had targeted him in the first place. Somehow they’d discovered that the professor had possession of the Book of Anu. If she hadn’t involved the professor, he would probably have went through his whole life without ever realizing that vampires were a reality.

The peaceful silence was abruptly shattered when a high-pitched giggle pierced the night air. Kathrina looked up and saw a female vampire hovering several feet above the ground. The sight of the woman sent a chill up Kathrina’s back. It was not that the vampire was horrifying to look at, but exactly the opposite. The woman had bright blue eyes and blond curls that fell across her shoulders. She could have been any suburban housewife - someone you might encounter while strolling down the aisle of a supermarket. It was the fact that the vampire was so average American that Kathrina found so frightening.

“Is this what you’re looking for?” The vampire smiled as she held up the Book of Anu so that Kathrina could see it.

Kathrina stood up, preparing to defend herself if she were attacked. “Was it necessary to kill him?”