Back Roads to Bliss (Saskatchewan Saga Book #6): A Novel 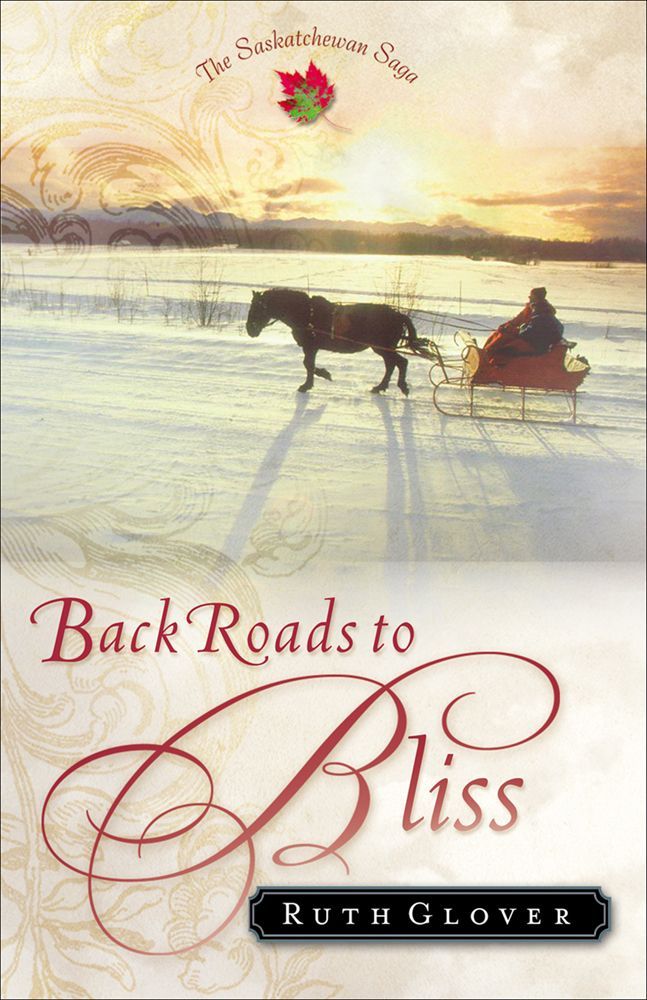 All rights reserved. No part of this publication may be reproduced, stored in a retrieval system, or transmitted in any form or by any means—electronic, mechanical, photocopying, recording, or otherwise—without the prior written permission of the publisher and copyright owners. The only exception is brief quotations in printed reviews.

Scripture quotations are taken from the King James Version of the Bible.

and the people who

fill my dreams and stir my memories

I
t wasn’t the usual yap of her dog, Fifi, that wakened her, nor was it the muted sounds of the chambermaid as she went about lighting a fire. Neither was it the cheerful birdsong outside her bedroom window, promising spring in England. She awoke with some distant thought nagging for attention; in her half-asleep state it eluded her. Never mind. As a girl—young woman—in a well-appointed bedroom in a handsome mansion, with breakfast on its way up shortly with no effort or worry on her part, with all of life before her and her body throbbing with health and vigor and her future full of possibilities, Allison Middleton had no appreciable concerns.

Accustomed to luxury though she was, she couldn’t help but take a moment to admire and appreciate the latest addition to the house as soon as she had made her sleepy way toward it: a room for no other purpose than pampering oneself, an exalted privy—a bathroom.

Stepping into this marvel of convenience, closing the door behind her and locking it, Allison leaned against it and found her satisfaction with life in general mounting, realizing, without speech,
The world is so full of a number of things, I’m sure we should all be as happy as kings
.

Taking her comfort and her luxuries for granted most of the time, occasionally a small sense of gratitude—as in this moment—swelled her heart. And never more so than when, at the close of day, she watched the stream of workers file from the factory, her father’s mill, the income from which made all her blessings possible. Seeing their weariness she was sobered, but only momentarily. For no pity of hers, no sympathy, would change their lot. What might have been done for them had she been a son was null and void because of her gender. The mill and its workers would never be any concern of hers. So she enjoyed the benefits of the woolen mill, with none of the worries.

Papa might have his faults, but stinginess was not one of them. Moreover, Papa was driven by a burning ambition to climb the social ladder, and if indoor plumbing was the latest thing being installed in the great houses of England, Middleton Grange should have it regardless of the cost.

Not that cost was any deterrent to Quincy Middleton. If wealth alone could have purchased the standing he wanted, it would have been his in a minute. The Midbury Woolen Mills, while making him excessively wealthy and giving him a certain power and importance, also marked him as a merchant and thus low on the social scale. But there was always the hope that, with care and effort, he might win some honor from the queen or perhaps run for some position in government. As it was, his importance didn’t go much beyond the boundaries of Midbury, the village that had sprung up around the mill that supplied its inhabitants with work and housed them, the rent going into the already bulging coffers of Quincy Middleton.

Yes, Quincy was careful to observe the amenities, to make the gestures, to sponsor the causes that would establish him as a man of parts, a man of talents, perhaps even as a gentleman.
Quincy’s canny choice of a wife had been the first rung on the ladder to success and acceptance; Letitia was born “quality.”

Success, in a business sense, he had attained, and wealth in abundance, but acceptance from the aristocracy, in spite of his marriage, eluded him. But still he tried.

The bathroom was part of that effort. London, of course, had developed sewage and water systems long ago, but they were slow in reaching the outlying areas, small villages like Midbury, in particular.

A spare bedroom had been given over to the project, and Letitia had seen to it that it was lavishly fitted out. Vanity, cupboards, overstuffed chairs—all added to the aesthetics of the room. The ceramic sink was set on graceful pedestals, the cast-iron tub was supplied with a shower ring that could be hung around the neck, sluicing water deliciously over the standing bather. There was no longer any need for water to be carried upstairs from the kitchen, growing cold as it came; a tank in the attic assured an abundant supply, and the new gas line meant hot water at the turn of a tap. Leaning against the door, Allison took a moment to savor the privacy, the cleanliness, the convenience.

But the privacy was threatened—a rattle of the doorknob at her back woke Allison out of her reverie.

Taptaptap
—by the gentleness of the sound Allison knew it was her sister, Sarah. Allison herself, if denied entrance, would have banged on the door, called impatiently, demanding entry. But Sarah, at fifteen, two years younger than Allison and in all respects different, was self-effacing, unassuming, modest, and—at least to date—meek.

“Go away,” Allison called, stirring from her daydreaming at last. “I just got in here and I’m not going to hurry.” She could hear the soft sigh of resignation from the other side of the door and felt a small pang of remorse.

“Give me a few minutes, Sister,” she amended, and immediately the sunshine, which had dimmed for the moment, returned to her day. Sarah was such a mouse, it was difficult not
to override her. Allison was a person of decided opinions and quick and thoughtless action; to do her credit, she
was
working on these aspects of her character. Not very successfully, she often feared, as she leaped into life and—yes—love with abandon.

Leaning toward her image in the mirror, blinking away the last vestige of sleep that lingered in her eyes, Allison examined her typically British rose-petal complexion for a single flaw and could find none. Sighing with satisfaction, she snatched the frilly cap from her head, impatient with the protocol that demanded it for sleep, and ran her fingers through her dark, springing hair, as resistant to taming as her spirit.

Suddenly wide awake, the import of the day struck her with full force, and the thing that had been teasing at her mind ever since she wakened:
This is my wedding day!
Or, on second thought, possibly tomorrow . . . probably the day after.

Excitement leaped into the vivid face in the mirror and brightened the eyes until they danced to life, sparkling like sunlight reflected from a gray sea. Allison’s eyes were that way—deceptively calm and quiet one moment, lit and lively the next.

Across Midbury, in the rooms above his father’s shop, was Stephen waking to the same thrilling realization, and were his thoughts full of cautious, secret schemes as were hers? She was sure of it.

Her mind given to breathless intrigue, Allison gave no thought to her parents, seated below in the morning room, except to wonder how to get out of the calls her mother had arranged for the afternoon (it was considered very ill bred to call before lunch, and Letitia was rigidly circumspect in all things). Allison knew the new calling cards had arrived, cards that included her name—as was right and proper for a daughter living at home—and Letitia would expect to be accompanied on her rounds today. Allison was sure her mother would include the Flagle house as a subtle means of displaying her
available
daughter’s charms to Norville’s mother, and she grimaced with distaste, enjoying the effect in the mirror.

Too bad about the cards; they would go to waste. Glazed, with simple engraving without flourishes or adornment in the best of good taste, they would be carried in a special calling card case emulating the style Queen Victoria had made popular, depicting a castle—Windsor in this instance—and known as a “castle top” case. Allison had been pleased when her mother ordered them, anticipating many sociable hours. Now she dismissed them and their importance impatiently.

Sarah was considered too young for calling, not yet out of the schoolroom, although the real reason was that she shrank from public exposure and begged her way out of such obligations. But Allison—she of the lively temperament and supreme self-confidence—had no such excuse; and with the new cards in hand, Mama would be counting on her accompanying presence today.

But in view of the things she had to do, like sorting and packing, an afternoon of calling was out of the question.

Moreover, her excitement was so extreme she was sure she could never conceal it from her mother. To be ladylike, restrained, polite, chatting inanely with the mother of Norville Flagle, whom she despised, while her heart beat fast and her head whirled, would be an impossibility. Some alternate plan must be put into effect, and quickly.

Looking at herself in the mirror, Allison noted her high color and bright eyes and decided she would make them work for her: a fever, sick with a raging fever—that would be her excuse. Allison pinched her cheeks, already rosy, and was gratified by the heightened color that could surely, if accompanied by moans and perhaps a few ready tears, indicate an illness that would keep the sufferer to her room for the day. Mama, though disappointed, would sympathize, apply a damp cloth to her daughter’s forehead, send the housekeeper up with some nostrum or other, and carry on with her scheduled calls for the day.

TimeRiders 05 - Gates of Rome by Alex Scarrow
Project Terminal: Legacy by Starke, Olivia
Black And Blue by Ian Rankin
From the Cutting Room of Barney Kettle by Kate de Goldi
Forbidden by Syrie James, Ryan M. James
Deviation (A Defined Series Book 1) by M.C. Cerny
All of You by Jenni Wilder
Walker's Run by Mel Favreaux
Scarlet Lady by Sandra Chastain
Daisy Dawson at the Beach by Steve Voake