Banded Brothers 03 - To Enchant An Eagle 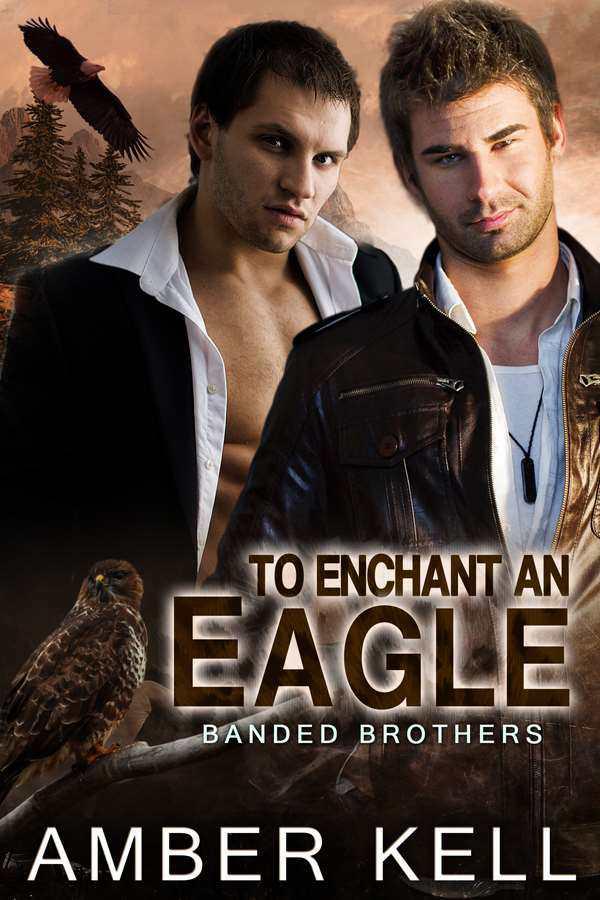 When love is on the line, crossing it is the only path to take.

Eaton Franks has had his eye on Marty, the leader of the hawks, for a long time. After he rescues the bad boy, things take a tragic turn and it looks as if the gang leader might never fly again. When Eaton has the chance to use a sorcerer to fix the love of his life, little does he know it will lead to his own abduction.

Marty is beside himself when his eagle shifter is stolen. He knows they are mates and he’s willing to do anything to get him back. However, now he has to decide if he is willing to give up his hawk half in order to save his eagle. Sometimes love makes a man do crazy things.

The unauthorized reproduction or distribution of this copyrighted work is illegal. Criminal infringement, including infringement monetary gain, is investigated by the FBI and is punishable by up to 5 years in federal prison and a fine of $250,000.
copyright

Please purchase only authorized electronic editions, and do not participate in or encourage the electronic piracy of copyrighted materials. Your support of the author’s rights is appreciated.

All rights reserved. Except for use in any review, the reproduction or utilization of this work in whole or in part in any form by any electronic, mechanical or other means, now known or hereafter invented, is forbidden without the written permission of the publisher.

Published by eXtasy Books Look for us online at: www.eXtasybooks.com

To Enchant An Eagle Banded Brothers Book Three
By
Amber Kell
For RJ Scott who said I couldn’t add a pigeon shifter to a book…so there.
Chapter One
“I

I think you need to recheck your numbers.” “Hmm?” Eaton kept his gaze outside even though his mind was focused on other things. His thoughts bounced around like a ball in one of those old time lotto machines, spinning around in an air-filled dome without rhyme or reason. Concentration vanished as he tried to grasp a small sphere of an idea, but lost it to the spinning masses.

Marty lay in other room while concern and fear nibbled at Eaton in equal measure. Would Marty wake up? Even the doctor didn’t know. Eaton worried his bottom lip with his teeth as concern creased his brow. He pressed his face to the window, letting the cool glass absorb some of his heat and soothe his restless spirit.

“You have an error.”

Eaton sighed. “I probably have several.” He still didn’t turn around. His studies beckoned, but he ignored their call. Instead, he watched the hawks circling Harris’s window. He had a bet going with Carey about long it would take the patient bear to get out his rifle and start picking the birds off one by one. Harris hated it when people messed with his light while he was painting.

“Your conclusion lacks supporting documentation, and you skipped a few steps,” the annoying man continued.

Eaton groaned before turning back to his study partner. Somehow lab work for his advanced physics class failed to grab any of his attention while his life lay in tatters. How could even the beauty of a perfectly balanced equation compete with the love of his life unconscious in the next room? Still, he did owe Gallen an apology.

“Sorry, I guess I’m distracted today,” he told his lab partner.
Gallen Theos narrowed his eyes at his Eaton. “I don’t know why you’re so scattered, Eaton, but you need to pull it together. This test is thirty percent of your grade. If you don’t pass this class, it won’t matter how brilliant your dissertation is— you won’t be able to present it.”
Eaton nodded. He knew that, he did. He just couldn’t seem to care.
“You’re right.” He forced his feet to walk their way back to the table, then sat down. No matter what happened with Marty, he needed to pull his shit together and make sure he didn’t flunk out of college. Eaton’s dissertation only had a bit more to go before he could defend it to his board. First, however, he needed to finish all his classes.
“Do you want to talk about it?” Gallen asked.
Eaton blinked at his lab partner in surprise. Gallen had a reputation for being a cold, uncaring sort of person. With his icy blond hair and silvergreen eyes, Gallen could have men or women eating out of his hand, but he never appeared to notice any of the people watching him. More than one person mentioned Gallen’s standoffishness to Eaton when he’d been assigned Gallen as a lab partner. Eaton never responded to other students’ probing questions. He didn’t gossip, he knew too well how much it hurt different.
Eaton figured either already or he was so focused on being an A student he didn’t allow for any distractions. Eaton had met grad students before who had almost tunnel vision and weren’t interested in anything other than their research. He didn’t know Gallen well enough to decide if that was how he thought or if he was indeed a cold bastard.
Gallen’s focus on studying even outdid Eaton’s own obsession. Now that he thought about it, he didn’t know Gallen’s major or even the subject of his doctoral thesis. His lab partner never even told Eaton his specific field of study.
“My boyfriend is in a coma,” Eaton blurted out. to be pointed out as

Gallen had someone He winced as the words escaped his mouth. Marty would probably molt if he ever heard himself described as Eaton’s boyfriend. Did they even have a relationship? One that consisted of more than Eaton’s unbridled crush on the hawk leader? A sigh slid from Eaton, long and heartfelt. He wished he’d taken the opportunity to let Marty touch him. Now he might never know the feel of the hawk shifter’s hands across his body.

He’d nervously stayed away, hoping Marty’s feelings for him might grow. His desire to be something more than another feather on Marty’s belt had led to him resisting Marty’s advances. Now he worried Marty wouldn’t wake again and Eaton would never forgive himself for the opportunity lost.

Conquering Alexandria by Steele, C.M.
Hawk's Prize by Elaine Barbieri
In Sickness and in Death by Jaye P. Marshall
If You Come Back To Me (If You Come Back To Me #1) by Beth Kery
It's Raining Men by Milly Johnson
Dios en una harley: el regreso by Joan Brady
The Sea of Adventure by Enid Blyton
Virtue's Reward by Jean R. Ewing
Savage: Iron Dragons MC by Olivia Stephens
Anita Blake 15 - The Harlequin by Laurell K. Hamilton