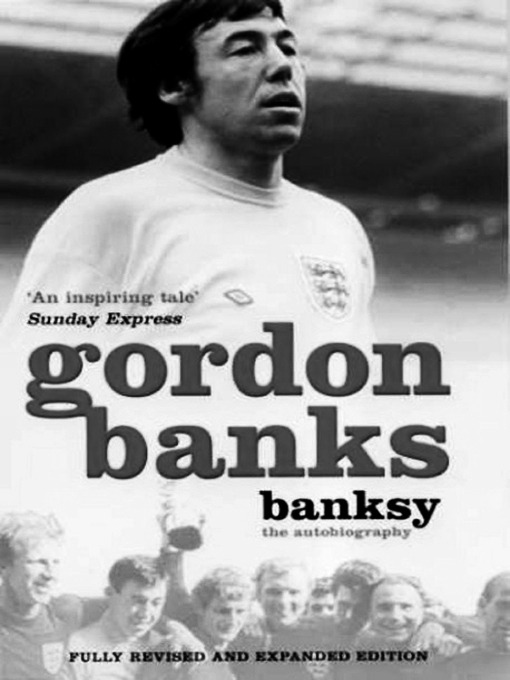 Gordon Banks OBE was born in Sheffield in 1937. Between 1955 and 1972 he played for Chesterfield, Leicester City and Stoke City. He was named Footballer of the Year in 1972. He made seventy-three appearances for England and was a member of the team that won the World Cup in 1966. He lives in the Midlands.

Except in the United States of America, this book is sold subject
to the condition that it shall not, by way of trade or otherwise, be lent,
re-sold, hired out, or otherwise circulated without the publisher’s
prior consent in any form of binding or cover other than that in
which it is published and without a similar condition including this
condition being imposed on the subsequent purchaser

My autobiography is dedicated to my family – Ursula my wife and the love of my life; our children Robert, Julia and Wendy; and our grandchildren, Matthew, Edward, Daniel, Eleanor and Elizabeth.

A Note to Les Scott

4. From Number Six to Number 1

5. Foxes in the Final

14. The Leaving of Leicester

17. The Agony and the Ecstasy

3
. Mam and Dad out walking in Sheffield.

6
. On holiday in Scarborough.

7
. Mam and Our Jack at Scarborough.

10
. With the Royal Signals in Germany.

11
. My debut for Leicester City reserves.

17
. The end of the semi-final against Liverpool.

26
. Working hard to improve my technique.

33
. The ball balloons over the bar to safety.

37
. Pre-season training around the lanes of Cheshire.

42
. My son Robert puts me through my paces at our home in Madeley Heath.

44
. Still managing a smile after my near-fatal car crash.

46
. Ursula and Wendy sift through thousands of letters from well-wishers.

48
. In action for Fort Lauderdale Strikers.

49
. With George Best, in the colours of the Strikers.

50
. Pelé visits Wembley prior to England’s last game there.

51
. Working on the book with Les Scott.

Every effort has been made to trace copyright holders and we apologize in advance for any unintentional omission. We would be pleased to insert the appropriate acknowledgement in any subsequent edition.

I would like to express my sincere thanks to the following people, all of whom have helped significantly in the production of my autobiography:

For Sal, Lauren and Ruby.

A Note to Les Scott

My sincere thanks go to Les Scott for his invaluable assistance in writing this book. Les contributes regularly to the Stoke
Sentinel
and the
Bristol Evening Post
, has written extensively for TV and wrote the screenplay for the film
The Rose Of Tralee
.

He collaborated with George Best, Gareth Chilcott and Sir Stanley Matthews on their respective autobiographies, and when I made the decision to write my own I had no hesitation in asking Les to lend a guiding hand.

Thanks, Les. It has been a privilege to work with you and great fun.

The mark of a good goalkeeper is how few saves he has to make during a game. A spectacular save is the last resort when all else – positioning, anticipation, defence – have failed. But saves are always what we are remembered for. There is one in my career that people always ask me about, it is seen as my greatest save – though not by me!

It was 1970 and England prepared to play Brazil in the World Cup, 1,500 metres above sea level under the relentless sun of Guadalajara. But the sweltering heat and lack of oxygen at such high altitude were the least of our concerns at the time. One man, bruised from Brazil’s defeat four years earlier when they failed even to reach the quarter-finals, and intimating this would be his last World Cup, was determined to make it a swansong to remember. This was a man who could single-handedly affect the outcome of a game at the highest level. He was, of course, Pelé.

In Brazil’s opening group match against a talented Czechoslovakian side, Pelé orchestrated the game from start to finish. Brazil won 4–1 and Pelé had been the hub around which every Brazilian move had turned. In that game he displayed a complete mastery of the ball, fantastic powers of acceleration, the cunning to veil his real intentions and the patience to bide his time before making his strike at the optimum moment. He kept the ball flowing, and his unselfishness brought his team mates into the picture time and again.

The England squad attended Brazil’s opening game. I watched Pelé with concealed awe: his finely tuned balance, his incredible skill on and off the ball, and his uncanny ability to ghost into the right position at the right time. Once he played the ball it was as if he disappeared into the ether. The Czechs were taken up with
trying to close down Jairzinho or Tostao, then, as if springing from a trapdoor, Pelé would suddenly appear in their penalty area to display his predatory skills to the full. The Czechs tried to put two, sometimes three, men on him, but such was his skill and technique that he always found the space to make the telling pass. Knowing Brazil were our next opponents I had sat and watched Pelé closely. By the end of the game I didn’t think he was just a great player. I knew he was
the
great player. How could we stop him?

The opening ten minutes of England’s match against Brazil are best described as footballing chess, with both sides sounding each other out. Brazil adopted a softly, softly approach. Consummate passers of the ball, they played it around among themselves at walking pace. Such precise passing meant that there was little we could do but watch. In the stifling heat and high altitude, to play a chasing game and try to close them down would have been suicidal. So we bided our time.

Then, just when I thought the game was settling down to a rolling, strolling classic, it suddenly exploded into life. Carlos Alberto played the ball out to Jairzinho on the Brazilian right. Jairzinho was a powerful, direct winger who could go through the gears like Michael Schumacher and cross the ball with Swisswatch precision. I hit my toes as soon as I saw Jairzinho bearing down our left flank. We were caught on the hop. Bobby Moore had left Tostao free at the near post, Brian Labone was just outside our six-yard box, and Alan Mullery who had been pushing up, was sprinting back, anxiety creasing his face at the sight of Pelé heading towards our penalty box, unmarked.