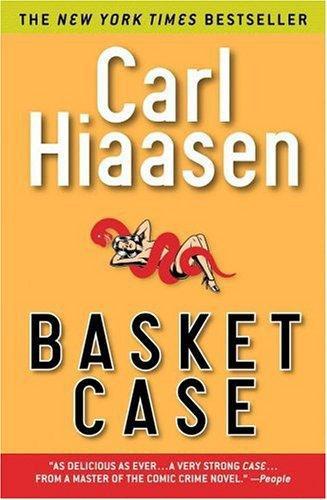 Regarding the death of James Bradley Stomarti: what first catches my attention is his age.

Thirty-nine. That's seven years younger than I am.

I'm drawn to the young and old, but who isn't? The most avidly read obituaries are of those who died too soon and those who lasted beyond expectations.

What everybody wants to know is: Why them? What was their secret? Or their fatal mistake? Could the same happen to me?

Something else about James Bradley Stomarti: that name. I'm sure I've heard it before.

But there's no clue in the fax from the funeral home. Private service is Tuesday. Ashes to be scattered in the Atlantic. In lieu of flowers the family requests donations be made to the Cousteau Society. That's classy.

I scan the list of "survived-bys" and note a wife, sister, uncle, mother; no kids, which is somewhat unusual for a 39-year-old straight guy, which I assume (from his marital status) James Bradley Stomarti to be.

Tapping a key on my desktop, I am instantly wired into our morgue, although I'm the only one in the newsroom who still calls it that. "Resource Retrieval Center" is what the memos say, but morgue is more fitting. It's here they keep all dead stories dating hack to 1975, which in a newspaper's memory is about as fresh as dinosaur dung.

I type in the name of the deceased. Bingo!

I am careful not to chuckle or even smile, as I don't wish to alert my ever-watchful editor. Our newspaper publishes only one feature obituary each day; other deaths are capsulized in brief paragraphs or ignored altogether. For years the paper ran two daily full-length obits, but recently the Death page lost space to the Weather page, which had lost space to the Celebrity Eye page, which had lost space to Horoscopes. The shrunken news hole leaves room for only a single story, so I am now cagey about committing to a subject. My editor is not the flexible sort. Once I tell her whom I'm writing about, there's no turning back, even if someone far more interesting expires later in the news cycle.

Another good reason for not appearing too excited is that I don't want anyone to suspect that the death of James Bradley Stomarti might be an actual news story; otherwise my editor will snatch it away and give it to one of our star feature writers, the way a cat presents a freshly killed rat on the doorstep. This piracy of newsworthy assignments is the paper's way of reminding me that I'm still at the top of the shit list, that I will be there until pigs can fly, and that my byline will never again sully the front page.

So I say nothing. I sit at my desk and scroll through the computer files that inform me in colorful bits and pieces about the life of James Bradley Stomarti, better known to the world as Jimmy Stoma.

As in Jimmy and the Slut Puppies.

Stashed somewhere in my apartment is one of their early albums, Reptiles and Amphibians of North America. Jimmy sang lead and sometimes played rhythm guitar. He also fooled around with the harmonica. I remember really liking one of the band's singles, "Basket Case," off an album called Floating Hospice. That one I lost to a departing girlfriend. Jimmy was no Don Henley, but the ladies found him very easy on the eyes. The guy could carry a tune, too.

Stoma also got arrested on a regular basis, and was unfailingly booked under his given name. That's how I got the computer to hit on "James Bradley Stomarti."

February 14, 1986: Mrs. Stoma files for divorce, alleging her husband is addicted to alcohol, cocaine and aberrant sex. The Slut Puppies open a three-night stint at Madison Square Garden, and from the stage Jimmy introduces his new girlfriend, a performance artist who goes by the name of Mademoiselle Squirt.

May 14, 1986: Stoma is arrested for indecent exposure during a Charlotte, North Carolina, concert in which he takes an encore wearing nothing but a Day-Glo condom and a rubber Halloween mask in the likeness of the Rev. Pat Robertson.

January 19, 1987: With the Slut Puppies' fourth album, A Painful Burning Sensation, poised to go triple platinum, Jimmy Stoma announces he is canceling the band's long-awaited tour. Insiders say the singer is self-conscious about his weight, which has inflated to 247 pounds since he gave up cocaine. Stoma insists he's simply taking a break from live performing to work on "serious studio projects."

November 5, 1987: Jimmy Stoma is arrested in Scottsdale, Arizona, after punching a People magazine photographer who had tailed him to the gates of the Gila Springs Ranch, an exclusive spa specializing in holistic crash-dietary programs.

November n, 1987: For the second time in a week, Stoma is busted, this time for shoplifting a bundt cake and two chocolate eclairs from a downtown Phoenix bakery.

February 25, 1989: Stoma and an unidentified woman are injured when his waterbike crashes into the SS Norway in the Port of Miami. The collision causes no damage to the cruise ship, but surgeons say it might be months before Stoma can play the guitar again.

September 25, 1991: Stoma's first solo album, Stamatose, is panned by both Spin and Rolling Stone. After debuting at number 22 on the Billboard pop charts, it plummets within two weeks to number 97 before—

This would be my editor, the impossible Emma.

"You most certainly did."

"Jack, I need a story line for the budget."

"It looks good shorter," I say. Emma hates it when I pretend to flirt. "Your hair, I mean."

Emma reddens but manages a dismissive scowl. "I trimmed the bangs. What've you got for me?"

Emma is young and owns a grinding ambition to ascend the newspaper's management ladder. She hopes for an office with a window, a position of genuine authority and stock options.

Poor kid. I've tried to steer her to a profession more geared toward her talents—retail footwear, for example—but she will not listen.

"Rabbi Klein died Monday," I remind her. "Only one dead clergyman per week, Emma. It's in my contract."

"Then get me something better, Jack."

"Who is James Stomarti?" she asks, peeking at my computer screen. With her intense jade-green eyes, Emma has the bearing of an exotic falcon.

"Never heard of him," Emma says.

"Then bump him to Metro," I suggest brightly.

Emma, of course, isn't keen on that idea. She and the Metropolitan editor don't get along.

"It's Sunday," I remind her. "Nothing else is happening in the free world. Metro can give the rabbi a fine send-off."

Emma says, "This musician—how old was he?"

Now I've got her chummed up.

"Probably drugs," she muses, "or suicide. And you know the rule on suicides, Jack."

Newspapers customarily do not report a private death as a suicide, on the theory it might plant the idea in the minds of other depressed people, who would immediately rush out and do themselves in. These days no paper can afford to lose subscribers.

There is, however, a long-standing journalistic exception to the no-suicide rule.

"He's famous, Emma. The rule goes out the window."

"He's not famous. I never heard of him."

Again she is forcing me to insult her. "Ever heard of Sylvia Plath?" I ask.

"Do you know why you've heard of her, Emma? Because she stuck her head in an oven. That's what she's famous for."

Emma's fine-boned lower jaw is working back and forth. She's itching to tell me to go screw myself but that would constitute a serious violation of management policy, a dark entry in an otherwise promising personnel file. I feel for her, I really do.

"Emma, let me do some checking on Stomarti."

"In the meantime," she says sharply, "I'll be holding twelve inches for Rabbi Levine."

A death notice isn't the same as an obituary. A death notice is a classified advertisement written and paid for by the family of the deceased, and sent to newspapers by the funeral home as part of its full-service package. Death notices usually are printed in a small type known as agate, but they can be as long-winded and florid as the family desires. Newspapers are always happy to sell the space.

The death notice of Jimmy Stoma was remarkable for its brevity, and for what was omitted:

STOMARTI, James Bradley, 39, passed away Thursday in the Berry Islands. A resident of Silver Beach since 1993, Jim was a successful businessman who was active in his church and neighborhood civic groups. He loved golf, sailing and diving, and raised thousands of dollars to help restore damaged coral reefs in the Florida Keys and the Bahamas. A cherished friend, devoted brother and beloved husband, he will be deeply missed by his wife, Cynthia Jane, and his sister Janet Stomarti Thrush of Beckerville. A private family mass will be held Tuesday morning at St. Stephen's Church, followed by a brief shipboard ceremony near the Ripley Lighthouse, where Jim wished to have his mortal remains committed. In lieu of flowers, the family asks that contributions be made to the Cousteau Society, in Jim's memory.

Odd. No trace of his life as a Slut Puppy, the six million records sold, the MTV video awards, the Grammy. Music wasn't even listed among his hobbies.

Maybe Jimmy Stoma had wanted it that way; maybe he had worked so hard to put the wild years behind him that he'd wanted nothing, not even his own death, to revive the past.

There is no James or J. Stomarti in the county phone book, but a Janet Thrush is listed in Beckerville. A woman picks up on the third ring. I tell her who I am and what I'm writing.

"That's right. Look, can you call back in a couple days?"

Here comes the dicey part when I've got to explain—very delicately—that when it comes to obituaries, it's now or never. Wait forty-eight hours and nobody at the paper will give a rat's ass about your dead brother.

Nothing personal. It's the nature of news.

"The story's running tomorrow," I tell his sister. "I really hate to bother you. And you're right, there's lots of stuff I could use from our clippings… "

I let this ghastly prospect sink in. Nobody deserves an obituary constructed exclusively from old newspaper stories.

"I'd prefer chatting with those who knew him best," I say. "His death is going to be a shock for lots of people all over the country. Your brother had so many fans… "

"Fans?" Janet Thrush is testing me.

On the other end: an unreadable silence.

"Jimmy Stoma," I press on. "Of Jimmy and the Slut Puppies. It is the same James Stomarti, right?"

His sister says, quietly, "That was a long time ago."

"People will remember. Trust me."

I say, "There wasn't much information in the death notice."

"Oh. The funeral home gave the name as Cynthia."

"She goes by Cleo," says Jimmy's sister. "Cleo Rio. The one and only."

When I say I've never heard of her, Jimmy's sister chuckles. A television murmurs in the background. Meet the Press, it sounds like.

"Well, pretend you know who Cleo is," she advises, "and I guarantee she'll give you an interview."

Obviously Sis and the widow have some issues. "What about you?" I ask.