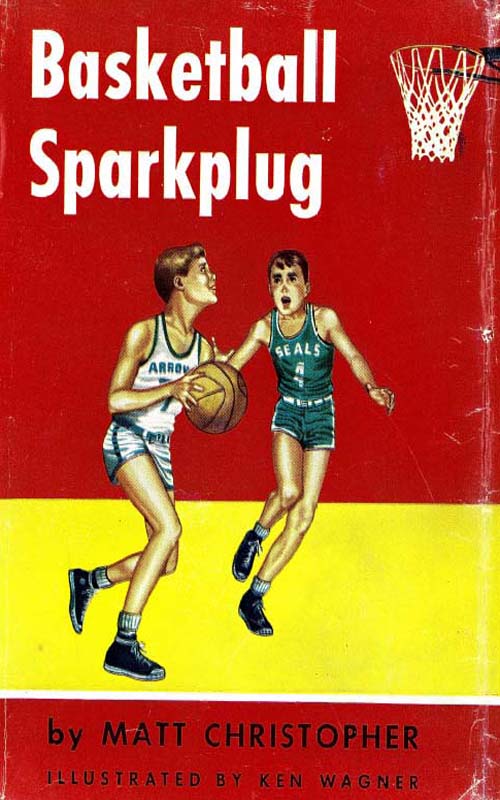 Other Books by
Matt Christopher

ALL RIGHTS RESERVED. NO PART OF THIS BOOK
MAY BE REPRODUCED IN ANY FORM WITHOUT
PERMISSION IN WRITING FROM THE PUBLISHER

Other Books by Matt Christopher

He turned back to the, game and leaned his elbows on his bare knees. He had played the first quarter and had scored six points.
That wasn’t bad. But he could not understand Coach Joe Stickles.

The coach had started Bobbie Leonard in Kim’s place in the second quarter. The third quarter had just begun, and Bobbie was
still in the game. However, the coach must know what he was doing.

Allan Vargo, the Arrows’ center and tallest player, dribbled the ball down-court. Just before the foul line and to the right
of it, he came to a quick stop. The Comet player who guarded him flashed by. Allan lifted the basketball above his head, his
fingers and thumbs spread far apart. With a spring of his long, thin body the ball left his hands and sailed in an arch for
the basket.

The ball dropped in without touching the rim! For a second it fluttered against the net, then fell through.

The crowd’s yell filled the school gym. Allan’s shot had tied the score!

Kim felt a tingle of excitement. So far the Arrows had lost two games and won one. If they took this game they would
have two wins and two losses, and they would be in third place in the Small Fry Basketball League.

But Kim didn’t really care too much about that. He didn’t even care too much whether they ended in first place, or last. What
he wanted more than anything was just to play basketball.

He met Coach Joe Stickles’s sharp gray eyes. The coach was a small, chunky man with very little hair on his head.

“Report to the bench, Kim, and take Bobbie’s place!”

Kim reported to the scorekeeper. A few seconds later the referee blew
his whistle and Kim ran onto the court.

He tapped Bobbie on the shoulder. “Your turn to warm the bench, Bobbie!” He smiled.

“Okay!” said Bobbie. He was a small, husky-legged boy with a crew cut. He pointed to the man Kim was to cover, and ran off
the court.

The whistle blew again for time in. The referee tossed the ball to a Comet player standing outside the white line. Since he
was Ron Tikula’s man, Ron covered him.

Kim tried to watch the boy with the ball and the boy he guarded at the same time. His man was on the go every second, darting
every which way like a
rabbit. Kim tried to keep between the two players so that if the ball was thrown to his man he could catch it.

All at once his man leaped in front of him and caught the ball! Kim scampered after him. His sneakers slipped and he almost
fell. He caught himself and went after the Comet player, who was running upcourt. Kim’s solid white legs looked like bright
winking lights. His thick blond hair bobbed on his head as if it would shake off.

He couldn’t let that man make a basket. He just couldn’t. The Comets would shoot ahead and Coach Joe Stickles would blame
him.

Kim caught up with the Comet player. He tried to get his right hand around
the boy’s waist to hit the ball. A loud
smack!
sounded. He had slapped the boy’s wrist instead of the ball. 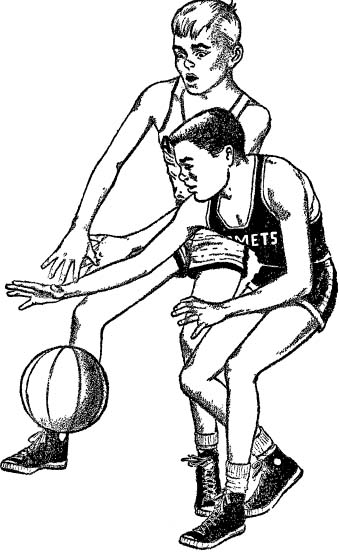 The referee’s whistle pierced the hall. A finger went up high.

S
OMEONE squeezed his arm. “Come on, O’Connor!” an angry voice snapped. “Watch what you’re doing! This ain’t no choir!”

Kim caught Ron Tikula’s disgusted look. Ron was taller and heavier than Kim. His hair was coal black, like his eyes.

Kim’s face reddened. He looked away.

The voice jerked him out of his thoughts. He glanced toward the bench.
Coach Stickles was making motions for him to move upcourt. He sprang into a run. He got into position under the backboard,
and kept his toes just outside the white line. The referee held up his hand. It came down like a signal arm at a railroad
crossing. At the same time his whistle shrilled.

The Comet player shot. The ball sailed directly through the hoop, hitting the net like a whisper.

Jimmie Burdette, who stood across from Kim, ran behind him and gave him a friendly tap on the hip. “Don’t let that bother
you, Kim! We’ll get ‘em!”

“Yeah,” Kim murmured. He knew that Jimmie was just trying to perk him up.

Dutchie McBride dribbled the ball halfway down-court, then passed to Allan. Allan shot to Jimmie, who faked a pass, then leaped
for a hook shot. The crowd screamed as the ball banked against the backboard, touched the rim, and rolled over.

He rushed in to get the ball. He fell on it. At the same time a Comet player tried to pull it from him. The whistle shrilled
for a jump ball.

The referee tossed the ball into the air. The Comet player outjumped Kim and tapped the ball. Allan Vargo snared it from a
Comet’s hands. He pivoted, then shot a short pass to Ron.

Kim was in the open. “Here!” he shouted.

He didn’t think Ron would throw the ball to him. Ron and Dutchie were two boys who teased him about singing in the church
choir. But Ron did throw the ball, and Kim caught it.

Kim stood, puzzled, inside the white circle in the middle of the court. No one was near him. Somebody in the stands shouted,
“Shoot! Shoot!”

Kim looked at Jimmie, Allan, and the others. They were well guarded. He looked at the basket.

It was a long way to throw. But at any second the quarter might end.

The Arrows were one point behind.
He was responsible for that point. If he shot and made it the Arrows would go into the lead. A lot of guys made shots from
the middle of the court.

Kim brought the big, round ball up against his chest, both his hands spread wide behind it. One of the Comets saw he was going
to shoot, and sped toward him. Kim leaped. The ball shot from his hands. It just missed the tips of the Cornet player’s fingers.

The ball sailed through the air close to the white ceiling, then curved down toward the basket. There was a hush in the gym.
Then a terrific roar as the ball sailed
over
the backboard!

Ron’s voice screamed at him. “Pass
that ball! Who do you think you are? Wally Goodrich?”

Wally Goodrich was a professional basketball player with the Seacord Lions. Kim always talked about him.

Time was called. A familiar horn sounded from the bench. Bobbie Leonard was coming back in to replace Kim.

Kim ran off the court. He kept his eyes down. He hardly noticed the sweat that rolled into them.

“That’s pretty far to shoot, Kim,” Coach Stickles said. “Try to pass when you can.” Then he leaned over and patted Kim on
the knee. “Don’t let it bother you, kid. Cheer up.”

Then the quarter ended.

T
HE two minutes went by quickly. The sweat on Kim’s body had hardly dried.

A Comet player threw in the ball from outside the out-of-bounds line. His teammate caught it and heaved a long pass upcourt.

“Get up there! Get up there!” Coach Stickles shouted. Kim wondered if anybody could miss hearing that strong, powerful voice.

A Comet player, alone under the basket, caught the pass and made a perfect
layup shot. Kim saw that the player was Bobbie’s man.

The game was close. But the Arrows still had a chance. Kim wished he could get in again. He would never have let his man be
alone as Bobbie had.

A Comet player caught a pass Allan had meant for Ron Tikula, and dribbled down to the circle in the middle of the court. Jimmie
Burdette made a few stabs at the ball, then hurried upcourt to cover his man.

Kim grinned. Jimmie Burdette was a good player. Not only that, he was a nice kid too. You never heard him argue. You never
saw him play dirty.

Kim was glad that Jimmie Burdette and he were good pals.

The Comet player was standing in the white circle—the same spot in which Kim had stood a few minutes before.

The Comet player glanced at the basket. He was tall, about five feet six or seven. He set himself for the long shot. His knees
bent, then straightened. The ball flipped from his hands. It was a perfect throw. It hit the backboard and bounded through
the hoop for two points.

The Arrows showed some fight after that. Kim got in and scored a set shot. Then Ron made a neat break, followed
by a quick drive in which netted them two more points.

On the next play Ron fouled. Coach Stickles took him out because it was Ron’s fourth foul. One more and he would be out for
good.

The Comets made the free throw, putting them ahead 49 to 47.

Dutchie passed the ball from out of bounds to Kim. A Comet player swept in like a bolt of lightning, caught the ball, and
dribbled upcourt. He stopped suddenly and hurled the ball to a teammate waiting under the basket. The player caught it and
dumped it in easily.

Kim took out the ball, tossed it to Dutchie. The Comet guard rushed in and tried to pull the ball from Dutchie’s
hands. They pulled and tugged, but neither let go of the ball.

“Jump!” cried the referee, the whistle bouncing against his chest as he ran forward.

The thin, long-legged Comet player outjumped Dutchie easily. He tapped the ball to a redheaded teammate who dribbled part
way up the court, then passed the ball. Another Comet snared it, stopped quickly, and tried a set shot. The ball sailed through
the air and into the basket.

“Go in, Ron!” said Coach Stickles. Ron went in. Jimmie Burdette passed the ball to him. Ron dribbled to the
center of the court and bounced the ball to Dutchie, who threw it to Kim. Kim snapped it to Jimmie, who was running toward
the basket. A Comet player intercepted it, dribbled upcourt, then passed. 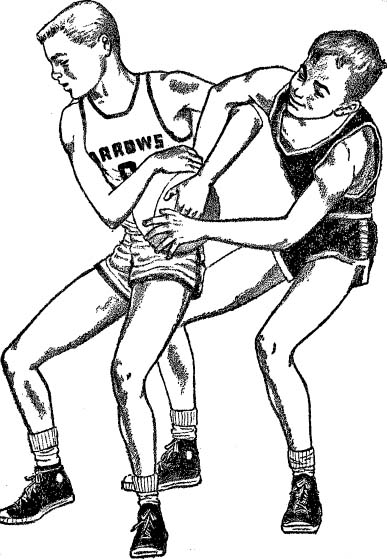