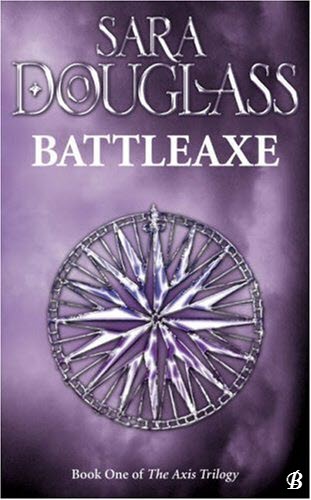 The books of
The Axis Trilogy
are for three respectable historians, A. Lynn Martin, Tim Stretton and Frances Gladwin, who have regarded with amiable tolerance their colleague’s slow drift into the Star Dance. May Fran eventually win her own battle with prophecy and may the realm and people of Achar help Lynn and Tim recall the days of the twelve months.

If my fortunes torment me, my hopes shall content me.

When will the hundred summers die, And thought and time be born again, And newer knowledge, drawing nigh, Bring truth that sways the soul of men? Here all things in their place remain, As were all order’d, ages since. Come, Care and Pleasure, Hope and Pain, And bring the fated fairy Prince.

The Prophecy of the Destroyer

1 THE TOWER OF THE SENESCHAL

3 THE LADY OF TARE

4 AT THE FOOT OF THE FORTRESS RANGES

5 IN THE PALACE OF THE KING

6 IN THE KING’S PRIVY CHAMBER

7 IN THE BROTHER-LEADER’S PALACE APARTMENT

10 ACROSS THE PLAINS OF TARE

12 AT THE EDGE OF THE SILENT WOMAN WOODS

14 INSIDE THE SILENT WOMAN KEEP

22 EVENING BY THE BARROWS

24 ACROSS THE PLAINS OF ARCNESS

29 THE BANE AND THE CHILD

47 IN THE HANDS OF THE MOTHER

55 THE ASSEMBLY OF THE ICARII 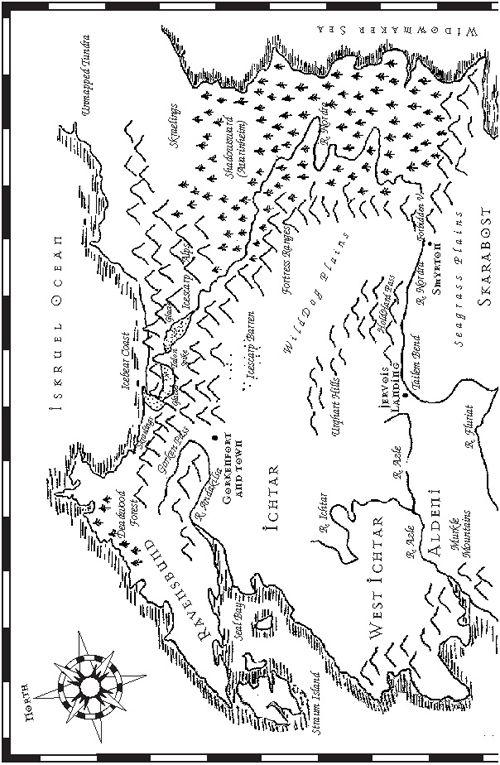 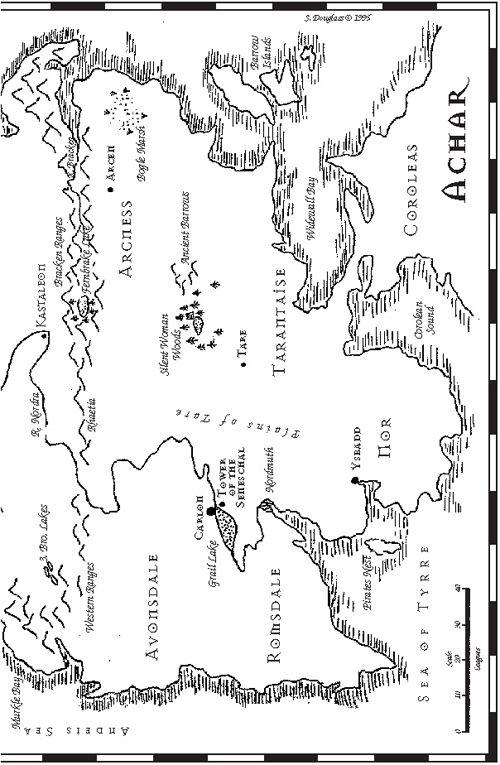 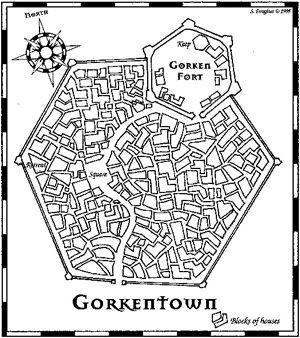 The Prophecy of the Destroyer

A day will come when born will be
Two babes whose blood will tie them.
That born to Wing and Horn will hate
The one they call the StarMan.
Destroyer! rises in the north
And drives his Ghostmen south;
Defenceless lie both flesh and field
Before Gorgrael’s ice.
To meet this threat you must release
The StarMan from his lies,
Revive Tencendor, fast and sure
Forget the ancient war,
For if Plough, Wing and Horn can’t find
The bridge to understanding,
Then will Gorgrael earn his name
And bring Destruction hither.

StarMan, listen, heed me well,
Your power will destroy you
If you should wield it in the fray
’Ere these prophecies are met:

The Sentinels will walk abroad
’Til power corrupt their hearts;
A child will turn her head and cry
Revealing ancient arts;
A wife will hold in joy at night
The slayer of her husband;
Age-old souls, long in cribs,
Will sing o’er mortal land;
The remade dead, fat with child
Will birth abomination;
A darker power will prove to be
The father of salvation.
Then waters will release bright eyes
To form the Rainbow Sceptre.

StarMan, listen, for I know
That you can wield the sceptre
To bring Gorgrael to his knees
And break the ice asunder.
But even with the power in hand
Your pathway is not sure:
A Traitor from within your camp
Will seek and plot to harm you;
Let not your Lover’s pain distract
For this will mean your death;
Destroyer’s might lies in his hate
Yet you must never follow;
Forgiveness is the thing assured
To save Tencendor’s soul.

T
he woman struggled through the knee-deep snow, the bundle of dead wood she had tied to her back almost as great a burden as the weight of the child she carried in her belly. Her breath rasped in her throat before frosting heavily in the bitterly cold southerly wind. She was short and strong, her legs and shoulders finely muscled by twenty-eight years of hard-won survival in her harsh homeland. But she had always had the help and company of her people to aid her. Now she was alone, and this, her third child, she would have to bear without assistance.

This would be her last trip across the valley. The severe winter storms of the past few weeks had kept her iced into her shelter so that her supply of the precious hot-burning Timewood was almost exhausted; if she did not have enough wood and dry stores remaining for her confinement, then she would die and her child would die with her. Only in the past day had the weather broken sufficiently to allow her to struggle through the snow to reach the Timewood trees. Now the wind was growing harsher and the snow heavier and she knew she had only a short time to reach her shelter. The knowledge that once the baby was born she would not be able to travel far from her shelter drove her on.

Although her current solitude was a path she had chosen freely, worry ate at her bones.

And worry about her child also gnawed at her. Her previous two pregnancies had been uncomfortable, especially in the final weeks, but she had borne those children with little fuss. Her body had recuperated quickly and had healed cleanly each time. With this child she feared her labour more than the lonely winter ahead. It was too large, too…angry. Sometimes at night when she was trying to sleep it twisted and beat at the sides of her womb with such frantic fists and heels that she moaned in pain, rocking herself from side to side in a futile bid to escape its rage.

She paused briefly, adjusting the burden of wood on her back, wishing she could ease the load of the child as easily. Last night it had shifted down into the pit of her belly, seeking the birth canal. The birth was close. Perhaps tonight, perhaps tomorrow. She could feel the bones of her pelvis grating apart with the pressure of the child’s head each time she took a step, making it hard to walk.

She squinted through the snow to the thick line of conifers about three hundred paces ahead. She had done her best with her camp. It was sheltered well behind the tree line in the lee of a rocky hill that, jutting above the peaks of the trees, was the first in a long range of hills leading into the distant Icescarp Alps. Well before her pregnancy had begun to show, she’d slipped away from her friends and family and travelled the Avarinheim to reach this lonely spot far to the north of her usual forest home. From the first of the autumn months, DeadLeaf-month, she had occupied her days with gathering and storing as many berries, nuts and seeds as she could. As hard as she searched, however, she had found only small amounts of malfari, the sweet fibrous tubers that provided her people with most of their winter sustenance. She had been forced to go without, and fears of what malnourishment might do to her and the child kept her awake at nights. The remains of a few scrawny rabbits, dried into leathery strips, were all she had for meat. She sighed and absently rubbed her belly, trying to ignore the fiery ache in her legs and pelvis, desperately wishing for a few chickens or a goat to supplement her diet.

She should never have tried to carry this child to term. Had she remained with her people she would not have been allowed to. It was
a Beltide child, conceived during the drunken revelry of the spring rites, a time when her people, the forest dwellers, and the people of the Icescarp Alps assembled in the groves where mountain and forest met. There they celebrated the renewal of life in the thawing land with religious rites, followed, invariably, by an enthusiastic excess of whatever wine was left over from long winter nights huddled by home fires. Beltide was the one night of the year when both peoples relaxed sufficiently to carry interracial relations to extremes never practised throughout the rest of the year.

Every Beltide night for the past three years she had watched him, wanted him. He came down to the groves with his people, his skin as pale and fine as the ice vaults of his home, his hair the fine summer gold of the life-giving sun that both their peoples worshipped. As the most powerful Enchanter of his kind he led the Beltide rites with the leading Banes of her own people; his power and magic awed and frightened her yet she craved his skill, beauty and grace. This last Beltide night past, eight months ago now, she had drunk enough wine to loosen her inhibitions and buttress her courage. She was a striking woman, at the peak of her beauty and fitness, her nut-brown hair waving thick down her back. When he’d seen her striding across the clearing of the grove towards him his eyes had crinkled and then widened, and he had smiled and held his hand out to her. Eyes trapped by his, she had taken his outstretched fingers, marvelling at the feel of his silken skin against her own work-callused palm. He was kind for an Enchanter, and had murmured gentle words before leading her to a secluded spot beneath the spinning stars.

The Law of Loving Others by Kate Axelrod
The Holy Warrior by Gilbert Morris
Bad Boyfriend by K. A. Mitchell
Wrong Town: A Mark Landry Novel by Miller, Randall H
Touched by Lilly Wilde
Yesterday's Kin by Nancy Kress
ABACUS by Chris McGowan
Covered In Paint: Book Five of the Art Of Love Series by Donna McDonald
Flight of Life (Essence Series #1) by E. L. Todd
A Midsummer Night's Scream by Jill Churchill