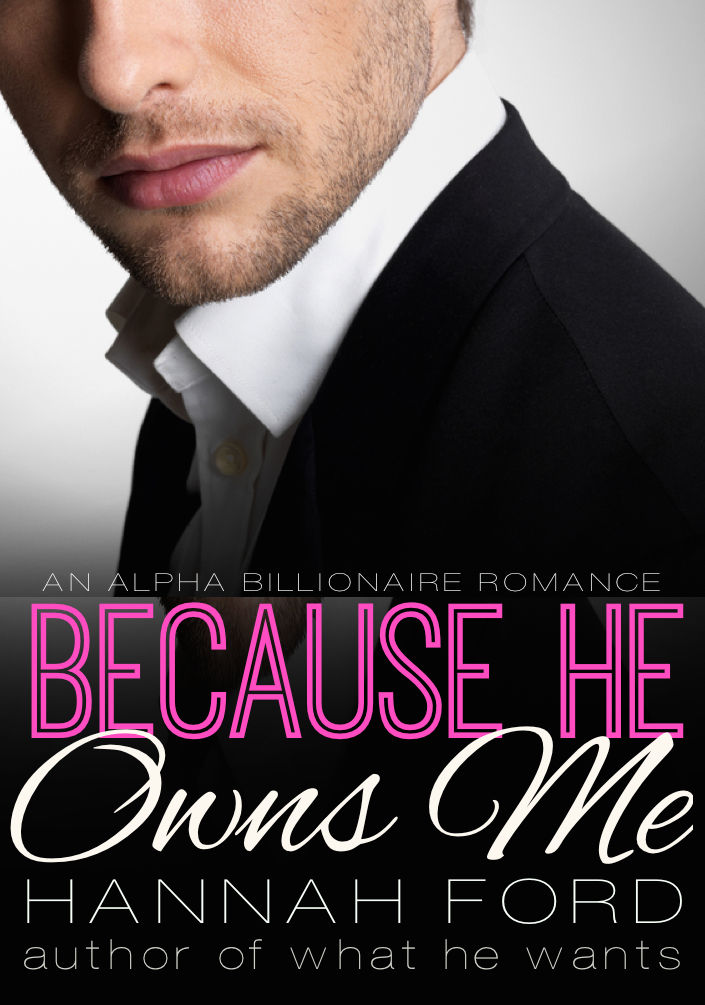 BECAUSE HE OWNS ME (Because He Owns Me, Book
One)

This book is a work of
fiction, and any resemblance to any persons, living or dead, is entirely
coincidental.

I was about to leave when I caught sight of
her.

She was sitting at the bar alone, her hands
clutched nervously in her lap.

Long blonde hair hung straight down her back,
and she was dressed in tight jeans that hugged the curve of her ass and a snug
black t-shirt with a line of tiny white buttons down the front.

The shirt clung to a pair of full, pert
breasts.

It was cold in the club,
and her nipples were prominent through the cheap material.

It probably tore easy, I thought, imagining what
it would feel like to rip the buttons off one by one until her swollen nipples
came into view.

A pair of black high-heeled sandals encased her
feet, and her toenails were painted a deep pink.

I’d never had a foot fetish, but the color
was undeniably sexy.

She had full pouty lips and a wide face, her
skin porcelain and smooth. She’d obviously never been here before.

I could tell by the way she’d laid her
phone on the bar, keeping it close in case she needed to call someone.

My cock twitched again, more insistent this
time, as I thought about pulling on that long blonde hair, tangling it in my
fingers, her back arched and my dick nestled between her ass cheeks as she moaned
in ecstasy.

I imagined tying her up
in one of those back rooms, pushing her to her knees, her full lips stretching
out around my dick.

It was my rule.

I was never with a woman for more than one
night.

It was a rule that could never be broken.

I had my reasons.

But was she the type that would go for an
arrangement like that?

I took another sip of my drink, letting the
beat of the music wash over me.

The girl at the bar looked around nervously,
and as she did, she met my gaze.

Her eyes were clear blue.

I thought about how she’d look down on
her knees, her hands tied behind her with a rope, those big wide eyes looking
up at me as I fucked her mouth.

You can’t do that to her, Callum,
I thought.

You could have any woman in this
club.

Find a different one.

But her pureness was what drew me to her.

Was she even from New York?

Everyone who came to Manhattan was
looking for something.

What was she
looking for?

A quick little tryst
before she went back to East Bumfuck or wherever it was innocence like hers
came from?

She turned to look at me, and our eyes
locked.

Something rushed through
me, an overwhelming feeling unlike anything I’d ever felt before.

It was as if the wind had been knocked
out of me.

I recovered quickly and smirked at her, and she
flushed and turned away.

I was about to get up and go get her when she
dipped her hand into her purse.

Then, ever so slowly, I saw her remove a small white
pill from a pink shell case.

I had two rules.

The first was one night only.

And the other was no
drugs
.

I turned away, the disappointment that rolled
through me out of proportion to the situation.

Then I was getting out of here.

I’d been stood up.

It was my own fault, really.

I’d known meeting a guy on a dating app
was not the best idea.

But Nathan
had seemed nice enough – he’d gone to Stanford, he was at NYU business
school getting his MBA, he had a nice smile and sandy blonde hair.

Nothing about him screamed raging
asshole or serial killer.

Of
course, I’d been a tiny bit suspicious when he’d insisted on meeting for a
drink and not dinner or a movie, but he’d sounded nice enough on the phone, and
if I was being honest, I knew little about the New York dating scene.

Everyone here was so busy and rushed.

I sighed and took another look around the
restaurant/bar, wondering if perhaps Nathan was here and I’d somehow missed
him.

I searched for any guys who were
sitting alone or seemed like they might be looking for someone.

No one looked even remotely like the pictures
of Nathan I’d seen online.

Although the man in the corner booth
was
staring
at me.

I blushed, feeling the color rising on my
cheeks.

God he was gorgeous.

Everything about him was just so
dark
-- dark hair, dark eyes, dark stubble on his chin, dark suit with a matching
black button-down underneath.

The
only thing light about him was his
eyes
– a
piercing blue that stood out even all the way over here.

The man was sipping something clear, and he was
all alone
, which made no sense.

Why was he sitting alone? He was the
most gorgeous man in here, all smoldering eyes and broad shoulders and messy
hair.

It wasn’t even a matter of
taste or debate.

Women should have
been throwing themselves at him.

My
pulse pounded and I my blushed deepened as he caught me staring.

A smirk played on his beautiful full lips.

I turned away, embarrassed.

I was sure he was making fun of me.

Suddenly, the lights in the restaurant dimmed,
and the music – a heavy rotation of 90s songs that had been remixed to
give them a pounding bass line – got louder as the time on my phone
screen switched over to 11 o’clock on the dot.

Something about the bar getting darker and
louder flipped a switch inside of me, and the social anxiety I’d struggled with
since I was teenager roared to life, threatening to take over.

I reached into my bag and pulled out an
Ativan, then changed my mind and put it back in its case.

Why waste a perfectly good Ativan on some
asshole from a dating app?

I stood up and grabbed my phone off the bar,
threw a twenty down to pay my tab (I’d had two diet cokes and a cranberry juice
while I’d been waiting) and headed for the exit.

I was almost to the door when I felt a pair of
strong hands slide around my waist.

“Where are you going?” a deep male voice breathed
into my ear, and I felt myself getting pulled back into a hard, broad chest.

I turned around and fell
into
a pair deep blue eyes
.

The man from the corner booth.

He moved so he was standing in front of me,
loosening his grip on me but keeping his hands on my hips, like he was afraid
if he let me go I was going to slip through his grasp and out into the New York
City night.

He was even more commanding up close – at
least six-foot-two, his suit impeccably cut, his hair fading perfectly into a
pair of short sideburns.

He smelled
like a yummy aftershave, something so male it made me dizzy.

He looked nothing like Nathan’s
picture, but perhaps Nathan was one of those catfishes I’d heard about who used
fake pictures stolen from someone else’s facebook profile.

But if you looked like the man standing
in front of me, I had no idea why you would bother to use a fake picture.

Nathan’s picture had been nice enough,
but it had nothing on the man standing in front of me.

He was still holding my hips, and his hands
snaked around to my lower back.

A delicious
warmth radiated through my muscles, instantly
relaxing me.

“Give me the drugs,” he demanded.

“The drugs in your purse.”

He let go of me and held his hand
out.

There was no threat in his
voice, just the tone of a man who was used to ordering people around.

“I don’t have any drugs in my purse.”

“You saw me with drugs?”

His eyes darkened, and I saw something burn
deep within the depths of his irises.

“Open your purse,” he commanded.

I started to tell him that was absurd and
ridiculous, but something about the look on his smug face made me want to prove
him wrong.

So I opened my purse and
showed him what was inside.

A couple of dollars.

My license and debit card.

A tube of red lipstick.

And my tiny pink shell case.

He reached in and pulled the shell case out of
my purse, cracked it open and glanced at the tiny pills.

Then he flipped the case over and poured the
pills onto the ground, grinding them into a fine powder under the heel of his
expensive leather dress shoe.

He handed the case back to me and then began to
walk back into the bar.

Had he really just dumped my Ativan all over
the floor then ruined them with his stupid expensive shoe?

Indignation bloomed in my chest, pushing
out any of the anxiety I’d been feeling a moment ago.

I followed the arrogant jerk back to his booth,
the red leather one that was situated in the corner of the club.

He sat down and calmly took a sip of his
drink, seltzer water with a fresh slice of lemon floating in it.

“Hey, those pills were mine, you
know.

It’s
against the law.”

“So call the police.”

“If you’re so concerned about laws and who’s
breaking them, then call the police.”

He took another sip of his drink,
then
glanced at
his watch, an expensive black and silver Rolex.

A thoughtful look passed over his face,
almost like he was trying to decide how much of his precious time he was
willing to devote to this conversation.

Something about him was flustering me.

Probably because he was so
god damn
good looking. “That’s not the point.”

“The point isn’t that I want to call the
police.

The point is that you can’t
just go around wrecking people’s things.”

“Trust me, sweetheart, I did you a favor.”

“Then what should I call you?”

He sighed in exasperation, like he couldn’t
believe he had to deal with the likes of me.

I was thrown, not expecting that.

Pigs in Heaven by Barbara Kingsolver
HIS (A Billionaire Romance Novel) by Kat Jackson
Indias Blancas by Florencia Bonelli
Boyfriend for Rent by Jamie Lake
Return to Homecoming Ranch (Pine River) by Julia London
Seduced by the Gladiator by Lauren Hawkeye
Taming Her Gypsy Lover by Christine Merrill
The Dragon Reborn by Jordan, Robert
Luke's Faith by Samantha Potter
Reapers by Kim Richardson