Read Before I Met You Online

Before I Met You 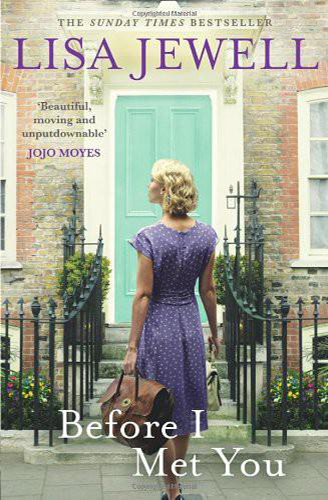 Notes on the Text

Having grown up on the quiet island of Guernsey, Betty Dean can’t wait to start her new life in London. On a mission to find Clara Pickle – the mysterious beneficiary in her grandmother’s will – she arrives in grungy, 1990s Soho, ready for whatever life has to throw at her. Or so she thinks…

In 1920s bohemian London, Arlette – Betty’s grandmother – is starting her new life in a time of post-war change. Beautiful and charismatic, Arlette is soon drawn into the hedonistic world of the Bright Young People. But less than two years later, tragedy strikes and she flees back to Guernsey for the rest of her life.

As Betty searches for Clara, she is taken on a journey through Arlette’s extraordinary time in London, uncovering a tale of love, loss and heartbreak. Will the secrets of Arlette’s past help Betty on her path to happiness?

Lisa Jewell was born and raised in north London, where she lives with her husband and two daughters. She is the bestselling author of
Ralph’s Party
,
Thirtynothing
,
One-Hit Wonder
,
Vince & Joy
,
A Friend of the Family
,
31 Dream Street
,
The Truth About Melody Browne
,
After the Party
and
The Making of Us
, all of which have been
Sunday Times
bestsellers. To find out more more about Lisa, please visit her website at
www.lisa-jewell.co.uk
or follow her on twitter
@lisajewelluk
.

This book is dedicated to Amelie, Evie, Mia and Joy, four of the prettiest girls I know.

THE DAY, AND
, in fact the rest of Elizabeth Dean’s life, had started at Weymouth at an ungodly hour, continued on to a damp, windswept ferry across the Channel and culminated in a silent drive across Guernsey and a walk up a long gravelled hill to a large house with grey walls and black windows. The house stood tall and wide, atop a hill of dense woodland. In front of the house was the sea. Behind the house was nothing.

Elizabeth thought, but did not say, that the house was clearly haunted and that she would not countenance spending as long as one night in it.

‘Elizabeth, this is my mother, Arlette. And, Mummy, this is Elizabeth – or Lizzy, as we usually call her.’

‘Yes,’ rejoined her mother’s boyfriend. ‘When she’s being good. When she’s not being good she’s plain old Elizabeth.’

Her mother’s boyfriend ruffled Elizabeth’s hair and squeezed her shoulder, and Elizabeth grimaced. She stared at the ground, at the brown and red tessellated tiles beneath her feet, cut and formed into the shapes of stars. She’d known this moment was
coming
for two weeks now, since Christmas Eve, when they’d got the call that had spoiled their Christmas Day. Two weeks ago Elizabeth’s mother and her boyfriend had sat her down and explained that his mother, a woman called Arlette Lafolley, a person of whose existence Elizabeth had been blissfully unaware before that moment, had fallen in her house on an island called Guernsey and broken something, and had been advised by her GP that she should have someone living with her.

And so it had been decided, somehow, somewhere, behind some closed door or other, that the solution to this problem was for Elizabeth and her mother to leave the only home that Elizabeth had ever known, a neat, red-brick bungalow on the outskirts of Farnham in Surrey, and go to this island to live with this woman, for at least, her mother had told her, three months, and to do so within two weeks.

‘Elizabeth,’ said her mother’s boyfriend, ‘are you going to say hello?’

Elizabeth tried not to squirm, but it was very hard not to squirm when you were in a haunted house with your mother’s boyfriend’s hand on your shoulder, being introduced to a terrible old woman whose frail bones had conspired to crumble and break and destroy your life. Elizabeth lifted her gaze to the woman in front of her, but not before noticing, with some surprise, that the woman was wearing red silk shoes adorned with matching rosettes. Elizabeth’s gaze also took in black lacy tights over shapely calves, and then a coat of full, luxuriant mink that hung from throat to mid-shin, and a face, round and elfin, like the face of a child, pink lips, pearly blue eyelids and a matching mink hat. On each earlobe a small chunk of diamond shone dully in the muted candlelight.

The lady in the fur coat paused for a beat and then bowed down so that her head was level with hers and said, ‘Hello, Elizabeth. I’ve heard a lot about you.’

It was impossible from her expression to gauge whether these things she had heard had been bad or good, but then her face softened and she smiled, and Elizabeth smiled back and said, ‘I like your shoes.’

Arlette smiled too and said, ‘Then you have very good taste. Now come in and get warm, I’ve lit the fire.’

Elizabeth and her mother exchanged looks. Elizabeth’s mother had met this woman before, about two years ago when she and her boyfriend had only just started dating. She had described her then as ‘colourful’ but ‘mean’. And someone ‘not to be crossed’. She had probably not thought, as she’d passed these judgements upon her boyfriend’s mother to her daughter, that one day she and her daughter would have cause to come and live with her. And she’d probably forgotten ever saying them. But Elizabeth hadn’t forgotten. And she had come to this place with a full armoury of attitude and verve, ready to take whatever this lady had to dish up. And then been momentarily thrown by a pair of scarlet silk shoes.

But still, red silk shoes. Even on an old lady, that was rather spectacular. Elizabeth had had to endure all sorts of nonsensical after-school dance classes in order to get her mother to buy her interesting shoes. Slivers of flesh-coloured leather with silky ribbons for ballet, and chunky-heeled shoes with buttoning straps for flamenco and jazz. But never anything in red silk. Surely, she thought to herself, surely anyone capable of owning a pair of shoes that magnificent must be halfway decent.

She followed the old lady down the hall and into a room on the left. It was entered by a tall door with an ornately stained window in the fanlight.

‘You’ll have to excuse the damp,’ said Arlette. ‘I haven’t opened this room up for quite a while. And it’s too cold to have a window open.’

Elizabeth brought her arms around herself and shuddered. The room was tall and bare, with wood-panelled walls and
pointy
furniture, and everything was brown apart from a roaring fire in the hearth around which they all huddled on a tapestry-covered ottoman.

The adults were all having a conversation about the journey and about the delivery van and about the weather and about Arlette’s hip (she had walked with a stick and a fairly pronounced limp down the hallway). Elizabeth got to her feet and went to the window. It was leaded and a touch baggy, and framed by dismal grey nets. Through it Elizabeth could see, in all directions, a vast expanse of blankness. She sighed and returned to the fire, the cold of the room seeping into the very marrow of her, the smell of damp firewood and unloved furnishings and cold, cold coldness leaching into everything.

‘We’ve got blow heaters coming in the van,’ said Jolyon, rubbing his hands together briskly. ‘We’ll plug them in when they arrive.’ He said this to Elizabeth and to Elizabeth’s mother in a perky, reassuring manner, but it was clear to Elizabeth and to her mother that it would take more than two cheap blow heaters to take the chill off this sad old house. ‘And then,’ he continued, somewhat desperately, ‘I’ll take a look at the heating.’

His mother threw him a disparaging look. ‘Not necessary,’ she said. ‘The air will warm up pretty quickly over the next few weeks. Remember, we’ve the Gulf Stream here. By the time you’ve worked out how to fix the heating and found someone willing to come and sort it for a sum of money that will not make your eyeballs bleed, it will be summer again. Every room has a fireplace. And it’s all a matter of wearing the right clothes. And keeping to just a couple of rooms. And, of course, lots and lots of hot drinks. Warming ourselves up from the inside out.’

Elizabeth stared at Arlette’s furry coat and hat, and thought, well, yes, that is easy for you to say, you are practically wearing a
bear
.

Elizabeth was put in a room on the first floor that was papered with a green and blue vertical stripe that looked like old men’s
pyjamas
. There were three small leaded windows overlooking the sea. It was even colder up here, and when she breathed out hard, her breath appeared around her like a wraith.

Her bed sat on the opposite side of the room to the windows. It was built from some kind of very heavy, darkly veneered wood and covered over with a cheap-looking duvet with a blue case. Atop the two biscuit-thin pillows sat a threadbare blue knitted rabbit that looked like he’d been left there to die.

Elizabeth thought of her bed at home. It was queen-sized, with a white powder-sprayed metal frame with curly bits in it and knobs made out of clear Perspex. Her mother had bought it for her for her tenth birthday; ‘a double bed for double figures’. She also had a queen-sized duvet, clothed in a white cover embroidered all over with rose sprigs, and a pillowcase trimmed with lace upon which Elizabeth arranged all her teddy bears every morning before she left for school. She’d asked her mum if they could bring the bed, if they could squeeze it into the big van with all their other things, but her mum had smiled apologetically and said, ‘Sorry, sweetheart, no beds. It’ll still be there when we get back.’

And that had been that.

Elizabeth rested her rucksack on the floor and unzipped it with icy fingers. Inside she felt around for the soothing plush of Katerina’s ears. She tugged at the fabric and pulled her free of the piles of books and games and notepads she’d packed this morning to relieve the boredom of an eight-hour journey. Elizabeth pulled the bear close to her face and breathed in the smell of her, and she felt her heart ache as the heady, honeyed scent of home filled her senses. With her nose still to the bear, she looked around the cold, Spartan room, she gazed at the endless concrete grey of the sea through the mean little windows, and then she stalked across the room, picked up the ugly knitted rabbit, opened a window and hurled the thing as far as she could into the cold grey yonder.