Read Before the Rain: A Memoir of Love and Revolution Online

Before the Rain: A Memoir of Love and Revolution

BOOK: Before the Rain: A Memoir of Love and Revolution
>>DOWNLOAD HERE >>READ ONLINE NOW
ads 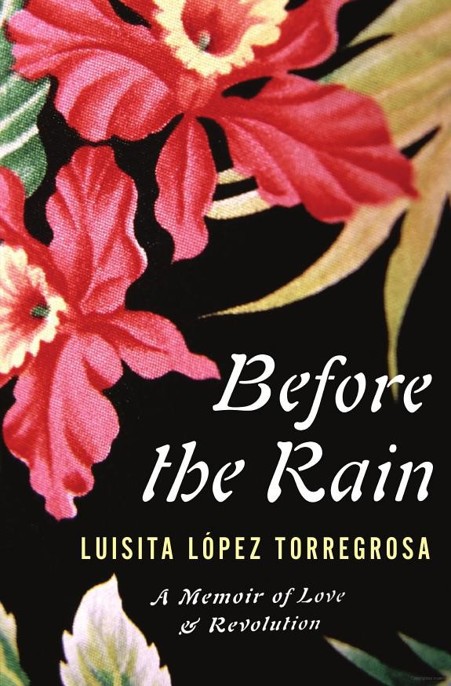 This is a work of nonfiction, a true account of my experiences as I remember them. However, I have changed some names, places, and identifying characteristics in order to protect the privacy of various individuals.
‌

Before the rain : a memoir of love and revolution / Luisita López Torregrosa.

Lines from “Vixen” from
The Vixen
by W. S. Merwin, copyright © 1995 by W. S. Merwin. Used by permission of Alfred A. Knopf, a division of Random House, Inc.

This book is for Kathy Robbins.
‌

Comet of stillness princess of what is over
‌

of the destroyed stories the escaped dreams the sentences never caught in words warden of where the river went . . .

I
N THE YEARS
since that first letter came, postmarked New Delhi and written on pale lavender Claridges Hotel stationery, I have begun this story a hundred times, and each time I was afraid. We are entering winter now, much like the one, years ago, when I left my house and a dead relationship behind in the suburbs to stay at a friend’s brick row house on a seedy street in the city, a bleak neighborhood of boarded-up ramshackle buildings, crack heads, and brown kids on roller skates. We called it Orchard House—a home for transient friends, broken hearts, and boozy evenings. Sooty, drafty, with creaking wooden floors and cigarette burns on the furniture, it was a place for great passions.

For a while that December, people came night and day, girls calling Tim on the phone, itinerant buddies bunking upstairs in rooms thick with dust and stale smoke. He had bought the house cheap from a couple who gave up on the block. Tim weeded the small patio out back, put in bricks, and planted tomatoes, basil, and rosemary, which, in wonder, I watched shoot up into city life. Gallery posters picked up in Italy, along with black-and-white blowups of grim scenes of poverty, were hung on the walls next to photos of dreamy girlfriends, all taken by his journalist colleagues and friends.

Tim couldn’t throw anything away; books were piled up on tables and desks, under his bed, and on bathroom shelves. He saved postcards, the sillier the better, and stuck them to the refrigerator, on mirrors, on the cupboards.

Any occasion was worth a party. For his big dinners, he walked several blocks to the farmer’s market. There he stocked up on arugula, fennel, red lettuce, and shrimp or swordfish. He would cook up a huge pot of Cajun gumbo stew laced with so much Tabasco sauce, it burned the tongue. He was a dilettante cook, an improviser, who in a snap could create a dish out of nothing. He made it look simple, but he literally sweated out that stew, mopping his face and neck as he chopped onions and garlic, stirred the pot, tossed the salad, mixed drinks, and answered the buzzing doorbell. I used to watch him with envy on those nights, his curly hair matted, his shirt soaked, moving with ease from one guest to another, warming up the crowd, sometimes picking up his guitar and strumming a few chords. I marveled at how he spotted the overflowing ashtray, the empty wineglass, or the lone guest in a corner. I thought he would make a great wife.

Many evenings he was out late. There was nothing for me but the empty night with constant replays of my breakup of weeks earlier. Again and again, I remembered the winter chill in that rambling house in the suburbs as, over and over, I recalled the last words I said before I picked up my coat and slammed the back door, got into my car, and drove into the city to Tim’s place. It was a cycle familiar to me: pursuit and ardor followed by domesticity, routine, sexual indifference, and the end.

We unraveled slowly, going round in seemingly endless circles. By the time I walked out that evening in December 1985 with all the flourishes, tears, and drama the moment demanded, that relationship had been dying for a long time, and I had already fallen for someone else but could not admit it to anyone, not even to myself.

The routine of the workweek gave me only a semblance of ordinary life. I went through the motions, the mindless tasks, getting dressed in jeans, pinstriped shirt, V-neck sweater; picking up the papers thrown on the dining room floor, sorting out the sections, reading them front to back; no food, but cups of strong coffee. By ten o’clock I was bundled up in an old charcoal-gray overcoat and trundling down to work, passing a grubby bodega, a couple of old hardware stores, a twenty-four-hour takeout