Read Begging to be Bred Online

Begging to be Bred 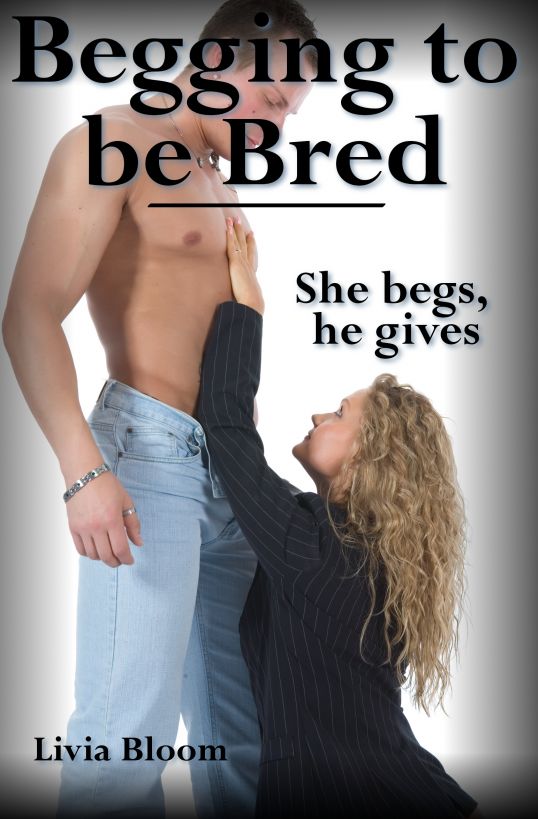 This book is a work of fiction.  Any
references to historical events, real people, or real locales are
used fictitiously.  Other names, characters, places, and
incidents are the product of the author’s imagination, and any
resemblance to actual events or locales or persons, living or dead,
is entirely coincidental.

Copyright © 2012 by Livia
Bloom at Smashwords

All rights reserved,
including the right of reproduction in whole or in part of any
form. 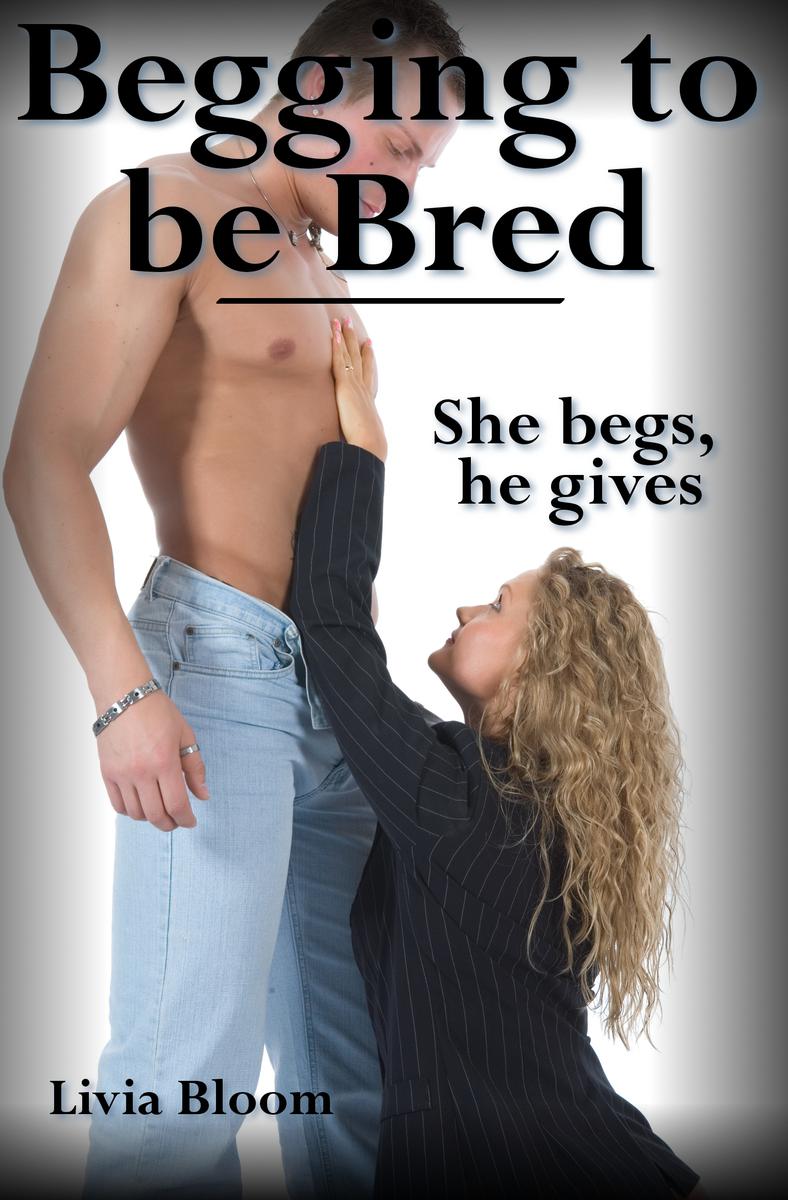 Carl Suther is my boss. He’s sexy, he’s rich,
and he wants me.

I know he wants me because I want him.

I fantasize about him, more and more often it
seems. The thing is my fantasy isn’t just having my boss… it’s
having him breed me. Yes, I want him inside of me, unprotected, and
I want him to fill me. I want his seed.

I now beg to be bred.

I want him, I need him. He’s asked me to beg
for him and I’ve done it. I’ll do it again too, if he asks.
Whatever it takes, I need him inside of me. I need to feel that
endless pleasure, knowing what could become of our sex together.
You may consider him a stranger, as I do, but let’s face it,
everyone is a stranger in some way or another. To him, I’m a
stranger because of my fantasy. My wildest urge that pounded like a
second heartbeat, a calling that began and wouldn’t stop. To me,
he’s a stranger because our time spent passing and chatting were
nothing more than what a normal office would offer.

The boss and the secretary, the age-old
story of lust and fantasy. They never end well. Lucky for me, I
hate my job and plan to quit. My boss doesn’t know this part yet,
even as he’s staring at my naked body. I’m on the edge of my own
bed, in my apartment, my legs spread. My sweet smell attacks the
air and wins; my body is warm, and my breasts feel swollen and
desperate. The man before me isn’t my boss anymore but rather the
tall, semi-dark skinned man I see everyday at work. His shoulders
are wide and round with muscle, leading to more muscles through his
arms. The rest of his body matches as I imagined it would. The
lines on his body resemble some kind of erotic art, made for sexual
desire and the fulfillment of my fantasy.

There is, however, only one real important
piece of him that completes the fantasy.

As long as his cock is hard and his cock
works, all will be right in my world.

His hands move to his belt. He doesn’t need
to use both hands but he does. He makes the scene look hotter and
more dramatic than it really is. He’s playing into it all, which is
fine for me.

“Please,” I beg in my most innocent sounding
voice. “Please… I need you…”

My right hand curls around the sheet on my
bed. My left hand wants to do the same but I have a better
idea.

My pointer finger and middle finger spread
my moist labia open. My hole is tender, throbbing, and warm with
juice.

His eyes gaze to my pussy and he licks his
lips.

I’m not interested in his tongue as much as
I am his cock, but I would never deny a sexy man to lick between my
legs.

“I really need you,” I say, adding a
desperate sigh and cry. I feel my throat almost in a whimper and I
realize that I’m not playing anymore. I’m not playing in his
fantasy, that ultimate
secretary-begs-for-the-boss
kind of
thing. I need him.

My pussy and body are ready.

The fantasy is standing before me.

He pushes his pants down, and I see the
beginning of his cock.

It’s his cock I want, and need.

It’s his cock I beg for.

It’s his cock that will breed me.

It happens faster than most would imagine.
It’s not a process or something scripted like in a movie. For me,
it’s an urge that started during a pregnancy scare a few years
back. A night of wild sex that preceded a bad decision to not use
protection left me dangling, waiting to find out if something was
going to come of it. During that few weeks period it took me to
learn that I wasn’t pregnant, I realized how much I would have
liked to be. Especially, with how wonderful the sex had been. The
passion of the sex, knowing how wrong it was. A complete stranger
pounding me with his cock and then filling me to the brim and back
with his orgasm.

I needed it again.

Normally, I’m able to subside my fantasy,
usually with the company of myself, a toy or two, or worst case, a
man. I protect myself but pretend I don’t. The ending result
obviously doesn’t satisfy me because I want to be bred.

It happens in the hallway at work, the
longest hallway on our floor, the hallway the leads from the main
offices to the boss’s office.

Carl Suther is a gorgeous man with
confidence that’s addicting. Any woman who meets him wants to be
near him. The women understand their place, knowing that Carl will
be the one to make any sort of move, if any at all. He’s not the
type to fuck someone at work, let alone his secretary.

I took the job because I needed a job. I’ll
admit that working with Carl everyday has its perks, mostly for the
eyes and my pussy, but I never imagined him being the one to breed
me.

I’m standing in the hall, just outside his
door, waiting for him to get off the phone.

The walls are an off-white color, the kind
of white that bothers you. Your mind tells you it’s white but your
eyes say different. I count the ceiling tiles four times and get
three different numbers. I could count a fifth time but it’ll give
me something to do later in life. I lean back and let my head rest
against the wall.

I close my eyes and try to enjoy the fact
that I’m being paid to stand here.

It’s not movement forward in life, but it’s
money. I don’t need the money or the job anymore, thanks to an
inheritance from a great uncle of mine. I keep the job because it’s
something to do, something to keep myself busy while I try to
figure out the rest of it all. It’s these moments, however, that
kill me. An idle mind is a wandering mind, and my mind starts to
wander.

I hear the voice of my boss, his deep,
commanding voice.

If you think about it, most phone
conversations can be really hot and sexy if you let your mind
believe it.

Hearing that makes my body suddenly warm up.
The temperature rises and there’s a small wild fire surging through
me. My toes curl in my shoes, my legs are tight, and my pussy…

Carl’s conversation lines up with my sexy
mind.

I hear his voice through the door and know
that he’s speaking to someone else. His voice isn’t as loud as it
would be if he were in front of me, but I lose myself to the
fantasy of him standing before me, wanting me to beg for his
cock.

As I think the word
cock
another
words comes to mind…
breeding.

The fantasy is now full circle.

Carl is strong, wealthy, and a man of power.
He’s the kind of man who would take pride in filling me with his
orgasm, I just know it. I don’t need this job anyway and this would
be the best way to send myself off. To carry Carl’s seed and to
carry my fulfilled fantasy forever.

My ass bounces off the wall again and I drop
the folder in my hand. My hands go to my knees and I bend over. I
pretend Carl is right behind me, his cock thick and long, ready to
fuck me.

The voice battled through the door, music to
my ears.

A second later, there’s a loud crash,
followed by mumbling I can’t make out. To me, it’s just Carl
preparing himself to insert his cock into me. He’s lining me up,
finding my tight hole, making sure I’m wet enough. Soon he will
test my depths and find out just how deep his secretary can go…

The reality of it all is that I’m standing a
foot away from the wall, bent over, looking like a hot mess. I turn
my head and see Carl standing in his doorway, his hands at his
hips. His tie is loose and he looks stressed. The more he looks at
me, the more unstressed he seems to become.

“I thought you were sick,” Carl said. “Are
you sure you’re okay?”

It’s my opportunity, one of those small
windows in life that open for a second or two. What can I do here?
As Carl looks at me, I can tell him I’m fine. I can pick up the
folder with some contract in it and hand it to him. I can go back
to my desk, sit in my own wet mess, and suffer until I can get home
and play with myself.

Or I can do something else.

Something with a little risk.

Fuck, I want him so bad.

His arm squeezes me tight, tighter than I
could ever remember him doing before.

“What’s going on?” he asks me as we step
into his office.

I took the opportunity a second ago to say
something but right now, I seal up.

“A bad day? We all have those. Did you hear
my phone call?”

“Fucking people,” he growls. “I had a deal
set up two years ago with this company. Full financing, low
interest, blah, blah. It was going to save a business. At the last
second, they pull. I’m talking, I’m on a fucking plane flying to
California and when I land, I get the email from their lawyer that
they’re pulling. Today, I get a call from one of our lawyers… they
want the deal again.”

Out of the Darkness (Untwisted #2) by Alice Raine
Coming Home by Mooney, B.L.
Home by Toni Morrison
Taken: A One to Take Primer by Tia Louise
We Will All Go Down Together by Gemma Files
Dark Descent (Vampire Hunter Book 5) by Reynolds, S.C.
Love Inspired November 2014 #2 by Lorraine Beatty, Allie Pleiter
Hush Money by Robert B. Parker
Knight Life by Peter David
Money & Murder by David Bishop