Read Belle of the Brawl Online

Belle of the Brawl 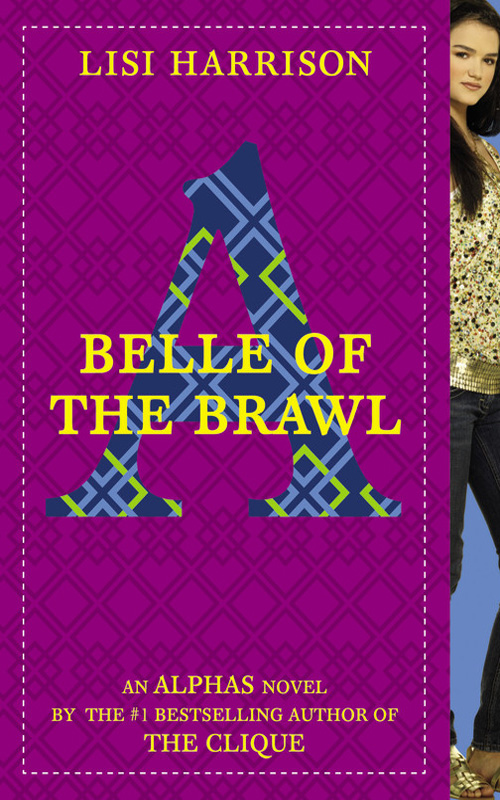 THESE BOOTS ARE MADE FOR STALKING

BELLE OF THE BRAWL

Poppy is an imprint of Little, Brown and Company

A Preview of
MY LITTLE PHONY, A CLIQUE NOVEL

Are
you
the ultimate undiscovered ALPHA?

As she sat in full lotus position on a silver blue yoga mat, Charlie Deery’s Chap Sticked lips formed a perfect circle as she chanted the sacred sound of the universe. But while her mouth was saying
om
, her mind was screaming
ommmhmuhgud
.
Scared
had become the new sacred.

She opened one coffee-brown eye and peeked at Alpha Academy’s holographic meditation yogi.

The chubby monk—or “Chunk”—wore a flowing saffron robe and floated a few inches above the Zen Center’s meditation pool. Conceived by Shira Brazille, head Alpha and creator of the academy’s @-shaped island, Tran’s purpose was to
teach the girls at the fiercely competitive high school how to relax. And it was completely stressing Charlie out.

The meditation courtyard in the belly of the Buddha-shaped Zen Center should have been a calming respite, but after last night, Charlie wouldn’t have been able to find peace at a Woodstock reunion. After one more deep inhalation of jasmine-scented air Charlie gave up.

“Sorry, Tran,” she sighed, her mahogany bangs blowing up off her forehead. “I just can’t focus.”

Tran’s puffy cheeks expanded with his smile, slicing his double chin into a quad. His eyes crinkled into crescents as his hologram face flickered out for a split-second and then reappeared. “Buddha says: The way is not in the sky. The way is in the heart.”

“I don’t even know which way is
up
,” Charlie answered, her voice shaken by confusion and stirred with exhaustion. She had spent the night playing ref to an endless wrestling match between her heart and her brain, and still, there was no clear winner in sight.

She lifted her eyes to the patch of blue sky above the meditation courtyard. But instead of neon-colored parrots and personal airplanes, she saw a cloud-shaped Darwin and Allie, each silently imploring her to choose a side—their side.

“You are still looking outside yourself for answers,” he said, patting his virtual heart. “Look in.”

“
How
?” Charlie asked, her sage-rage mounting.

Tran flickered again. He opened his mouth to speak, but she didn’t want to hear it. The only thing Charlie wanted to “look in” was a pint of Tell Me What to Do Before I Go Nuts ice cream. Was he ever going to give her some
real
advice? If not she’d be better off with a Magic 8 Ball. At least that gave answers.

“Namaste,” she said, aiming her aPod at his muffin top, and pushing
END SESSION
. “Namaste,” he bowed and then disintegrated.

Loyalty vs. Love? Head vs. Heart? BFFs vs. BFs? The answer was harder to come by than an iPad 4G.

Charlie unwound her legs from lotus position and reached toward the stone bench where she’d set down her breakfast, a frosted beaker full of a brain-stimulating protein shake specially concocted for invention majors. She placed the silver straw between her lips and took an aggressive sip. Hopefully the ice-cold green goo would cause brain freeze and grant her a moment of much-needed peace. But instead, all the green tea, ginger, and honey blend left behind was the metallic
tinge of panic on her tongue and a mild stomachache.

Charlie pulled out her aPod again and began pacing the perimeter of the meditation courtyard like a caged circus lion. She had one option left. Thumbing the screen she located the Alpha Class Selector app and started to scroll through her options to see what else she could add to her schedule. Overwhelmed by the 322 current courses, Charlie decided to start with the A’s and quickly selected Acrobatics, Animation, Arabic, and Astronomy, bringing her total class periods up to eleven. Now she wouldn’t have a spare second to fret about her life.

Setting her aPod down next to what remained of her breakfast, Charlie took a few cautious steps toward the reflection pool and leaned over until she could see herself in the placid water. She shivered and wrapped her arms around her bare shoulders, going over the situation for the hundredth time. Her relationships were tied in more knots than a cable-knit sweater. Wherever she pulled, she would end up with the same result: her life unraveling.

Best friend or boyfriend? Who should she choose? Who would she lose? She turned away from the pool and walked to the Zen garden, a rectangular patch of sand encrusted with polished pink quartz and black obsidian rocks. Picking up a small rake, she began to scratch a list of pros and cons into the sand.

Charlie nibbled her cuticles and studied her list. One wrong yank and the fabric of her life would collapse.

“Buddha? What should I do?” Charlie shouted up through the cavity of the giant deity. Her low, sensible voice struck her as screechy and desperate as it echoed off the hammered-silver walls. “I need a sign. And I need it fast.” She turned in a slow circle, like a satellite searching for a signal. A bird passed over the open sky above—was that the sign? Was it telling her to leave? Charlie bit her lip and struggled to interpret it, but it was so vague.

A text from Buddha! How very modern.

She ran to her aPod.

Allie:
Where R U? Hash browns at brkfst!

A slow smile spread across her face.

“Thanks, Buddha,” Charlie whispered, stepping out into the tropical sunshine of Alpha Island. She yanked the elastic out of her ponytail and liberated her brown waves. She had her answer. She finally knew what to do. The only question left was: could she go through with it?

APOD MESSAGE
TO ALL STUDENTS AND FACULTY

CHANGE IS IN THE AIR.

ASSEMBLY AT THE PAVILION.

Hurrying down the gravel path between the dorms and the Pavilion, brushing past palm fronds, giant ferns, and fragrant plumeria, Allie A. Abbott’s heart was soaring like the wings of the phoenix-shaped building in front of her. Surrounded by Alphas in their school uniforms—clear gladiator sandals, balloon-sleeved button-down shirts, and pleated metallic miniskirts that twinkled in the twilight—Allie may not have been among friends, exactly, but at least she wasn’t in disguise anymore. Her blond hair was back, navy blue eyes no longer hid behind fake green contact lenses, and she’d finally rebooted her golden tan. A beauty must-have she was forced to sacrifice while pretending to be Allie J. Abbott the pasty eco-maniac who accused her of stealing sun from the flowers… along with her identity. Unfortunately, the identity part was true. But oh, well. That was more behind her than the butt floss she
proudly called underwear. The days of wearing recycled granny panties were over.