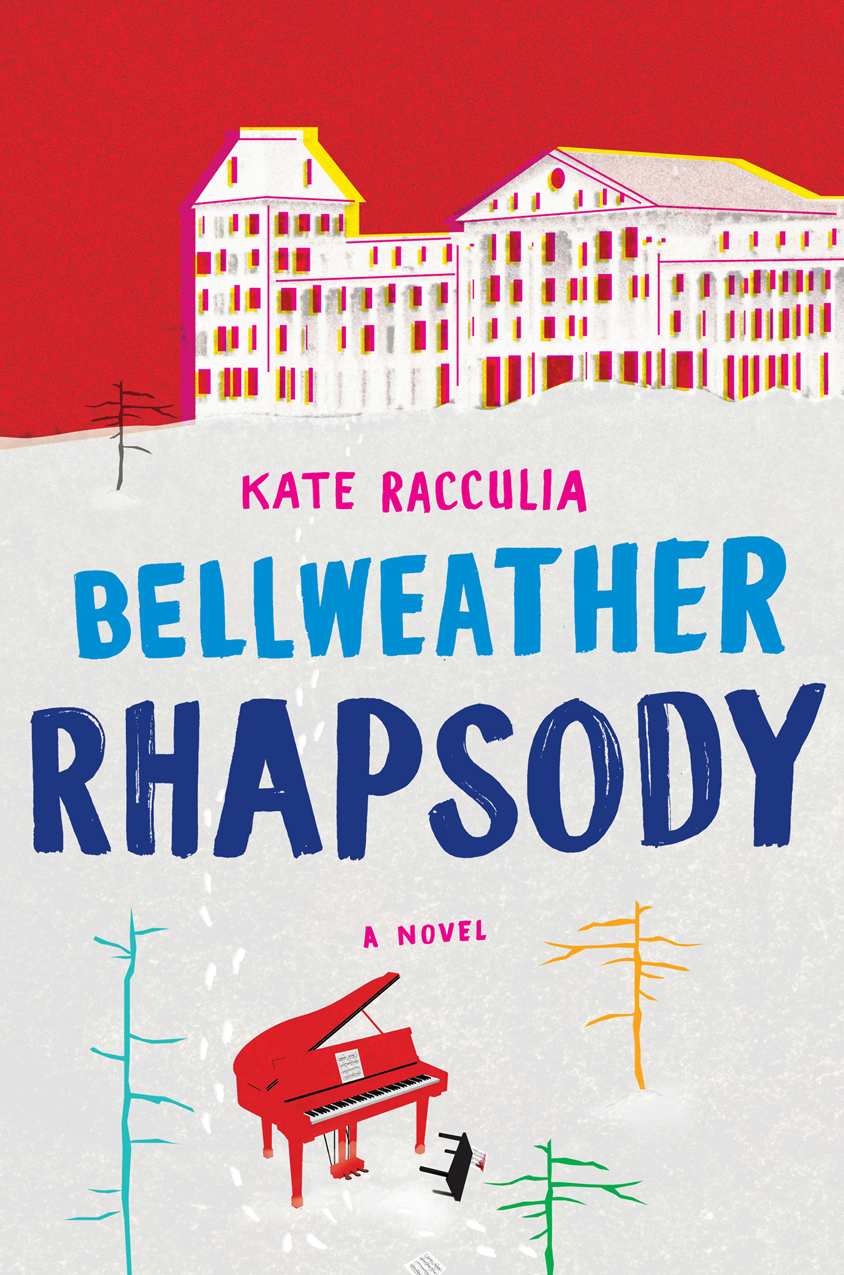 Heaven Help Me for the Way I Am

The Face of the Bellweather

Return of the Unremarkable Cupcake

Alice in the Morning

Alice, the Next Morning

I Want to Believe

For all the players, no matter their part

There is nothing with which every man is so afraid as getting to know how enormously much he is capable of doing and becoming.

Every love story is a ghost story.

M
INNIE GRAVES
is a bridesmaid.

Her bangs are crispy with Aqua Net. Her ponytail is so tight her forehead aches. Her feet throb in shoes that are a size too small, Mary Janes dyed special to match the totally rancid dress Minnie’s big sister, Jennifer, picked out just for her. There’s a thing called a crinoline and she has to remember to always cross her legs and it’s a total pain in her twelve-year-old ass. And it’s pink. “It’s not pink, it’s
cranberry wine,
” Jennifer said, but Minnie, whose big brother, Mike, tells her about all the horror movies he watches, thinks she looks like someone dumped a bucket of pig’s blood on her.

Minnie’s mother told her that, when the wedding started, Minnie would forget the crinoline itched and just be happy to see her big sister get married to Theodore. But Minnie’s mother lied: Minnie spends the entire ceremony glaring laser-beam eyes at Theodore’s stupid stomach, thinking it’s really appropriate that he’s named after the fat chipmunk. The priest talks for
ever,
and then, because she is part of the poofy-dress brigade, Minnie can’t go with the rest of her cousins for cheese and crackers and little hotdogs wrapped in bacon—she actually has to stay and take pictures with these morons, and act like she’s happy and everything is totally awesome, and pretend she doesn’t know what she knows about her big sister. What she saw in the mirror this morning. She smiles so hard her cheeks hurt as bad as her smashed toes.

The photographer wants to take pictures of the bride and groom by themselves. Minnie is free; she doesn’t wait for her parents or her brother, she just walks away. She thinks that if she stays a second longer she is going to throw up or haul off and punch someone, because she feels hot and itchy and awful and she doesn’t know how to talk about it. She stomps across the hotel lobby, away from the ballroom where she can hear the rest of her family gobbling those bacon hotdogs and blabbering—probably about how beautiful Jennifer looked, and wasn’t Theo handsome.

They are all so
stupid
. Minnie feels like crying, they’re so stupid.

At the elevators, she pushes the triangle pointing up. It turns yellow under her thumb. She doesn’t really care where she goes, she just wants to get away, so she steps in and pushes the first button she sees. Seven. It’s cracked. When it lights up the cracks glow like little bolts of lightning and Minnie wonders how many times you have to push a plastic elevator button to crack it. She steps on the heel of one shoe, then the other, and nudges them off her feet.

The car is small, with mirrors on all sides.

When Minnie blinks she sees Jennifer this morning. Standing with her back to the bathroom mirror, looking over her shoulder at a low bruise the size of a cantaloupe, the right spot for a kidney punch.

“Since when don’t you knock?” Jennifer says. “Beat it, Bug.”

“Did I do that?” Minnie asks, because they shared a bed last night, and Minnie has been known to run hurdles in her sleep.

Jennifer’s reflection tilts its head and her eyes are sad when she says, “No, honey.” And Minnie notices the bruise is yellowish on the edges. Bruises don’t turn that color until a few days after you fall, or run into a table, or wipe out on your skates.

Minnie doesn’t know why but her stomach aches. This feels—important. Important, and scary, and Jennifer—who has never told her little sister a single private grown-up thing—says she can’t tell anyone about it, okay? It doesn’t matter. Theo loves her. She knows Theo loves her. He promised her he’ll never do it again, and she believes him.

In the elevator, Minnie blinks and blinks but she can’t see anything except bruises reflected to infinity.

When the doors open, she bolts into the hallway and feels afraid. This is the biggest hotel she’s ever been in. Not that the Holiday Inn where they stayed when they visited Hershey Park was much competition for anything, but the Bellweather is so big, so in the middle of nowhere, it’s scary. She knows she’s in the tallest part, the tower, but there are hundreds of rooms and empty ballrooms and swimming pools (more than one!) and long dark halls with dark doors.

Stepping into the Bellweather for the first time was like being swallowed. A nice old man with a bow tie gave her a piece of candy and leaned down to say “Welcome to the Bellweather!” while her parents checked in, but it didn’t really help. He offered to take her and Mike on a tour, to the auditorium, the library, the shops, and the indoor squash courts, whatever those were; he was super-excited about showing off but Minnie didn’t want to go. She still can’t shake the awful feeling that the lobby, with its brick-red and gold and white curlicue carpet and red and gold fabric on the walls, is the stomach of some giant animal, that the old crooked chairs facing each other in half circles are rows and rows of teeth.

And it smells. It smells like Pledge and broccoli and Grandpa, and the first thing Mike said when they got off the elevator was “Come play with us, Danny!” And she really
did
haul off and punch him then, because he knows how scared she is of that movie. He went to see it last Halloween at the drive-in. It’s her own fault, she realizes; she asked him to tell her about it. “It’s the scariest thing you’ll ever see,” Mike said, wiggling his eyebrows. “There are these two little twin girls, about your age, and their dad chops them up with an ax and you see them, like, all bloody, with their parts strewn all over the hall. And they haunt the hotel and they’re really lonely, so when this kid Danny shows up on his Big Wheel—well, they just want to play with him. But ghosts don’t play very well with the living.”

She didn’t know which was scarier, getting chopped up with an ax or having no one to play with for eternity but your sister.

She shivers and looks down the hallway. It stretches on and on in either direction, the lights on the walls low and flickery. Minnie realizes she is holding her shoes, one in each hand, and thinks they’re the only weapons she has.

Against what? A little boy on a Big Wheel? Two little girls, hacked to pieces with an ax?

No,
she tells herself. Don’t think about that. That’s just a movie. It’s not real. It didn’t happen.

She calms down for a second, but only for a second, because now that she’s not afraid of little girl ghosts she’s remembering that her sister just married a jerk. “Theo is an asshole,” she tells the hallway.

She smiles a real smile for the first time all day.

“Theo is a total asshole,” she says, a little louder.

Something thumps nearby and she starts, giggles.

A door in front of her explodes and a man, his chest a bursting red balloon, flies out and crumples against the opposite wall. He lands with his face turned toward her and his eyes are bright blue and open, bloodshot with shock. There is a smell of hot metal, and Minnie, stunned, squeaks. She takes a step backward.

Then she takes a step forward.

Minnie Graves, who has never in her life had cause to be frightened of anything not contained on a television or movie screen, who has a surfeit of imagination and twice as much curiosity, convinces herself none of this will hurt her. She only knows that she wants to see this man up close, to discover what has ejected him so violently from room 712. Her bare feet are silent and the carpet is soft, and she crouches by the man’s body. He reminds her of her Uncle Bill: younger than her parents, older than her sister or Theodore. He is wearing a tuxedo with a sort of wide belt the color of Smurfs. His chest is a pile of red meat, bright against his white shirt. Minnie has to squint to look at it, like she’s looking straight at the sun.

He’s not dead the way Grandma Harris was dead last April. He’s not dressed neatly or lying with his hands crossed over his chest, cheeks too pink and waxy.

He is still warm. He’s leaking parts of himself. Minnie’s head fills with cold white static.

She hears a creak and a groan and looks up into the broken doorway of 712. There is a woman in a beautiful wedding dress, floating in midair—but then Minnie realizes she must be standing on a chair and only looks like she’s floating because her dress is so poofy and full. It makes her think of an upside-down cupcake. It’s prettier than Jennifer’s, Minnie thinks, and feels guilty.

“Little girl,” the woman says to her. Her voice is low and thick. “Little girl.”

The Scoundrel's Bride by Geralyn Dawson
The Long Hunt: Mageworlds #5 by Doyle, Debra, Macdonald, James D.
The Fixer by Woods, T E
TALES FROM A JEWISH GRANDMOTHER:A book of "Bubbe Meises" by Cynthia S. Goren
The Sleepless by Masterton, Graham
Killing Them Softly by Glenn, Roy
A Dark Guardian by Grant, Donna
Home For the Haunting: A Haunted Home Renovation Mystery by Blackwell, Juliet
STARGATE ATLANTIS: The Furies (Book 4 in the Legacy series) by Jo Graham
Salter, Anna C by Fault lines