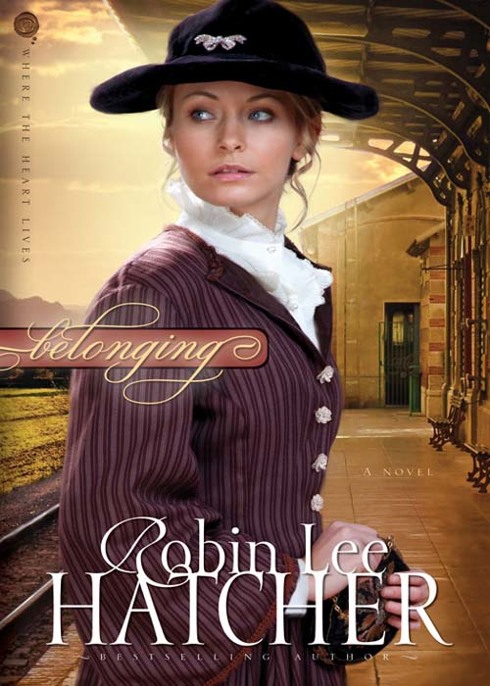 WHERE THE HEART LIVES

And we know that God causes all things to work together
for good to those who
love God, to those who are called according to His purpose.

Icy tentacles reached through the thin walls of the tenement building where Elethea Brennan lay dying, her three children standing at her bedside. There was Hugh, thirteen and the only boy, as handsome as his father ever was, with his dark hair and eyes. Next to him was ten-year-old Felicia, the quiet, bookish Brennan, her blue eyes seeming to understand far too much. And next to her was Diana, at six the youngest, and the only one to inherit her mother’s red hair and green eyes.

Oh, how she loved them, these three. Loved them more than she’d ever thought possible when she married Sweeney Brennan and came with him to Chicago to build a new life. How she hated to leave them. She was ready for heaven, but it broke her heart all the same to say goodbye to the ones who’d made life worth living.

It took enormous effort, but somehow she managed to lift her left arm and take hold of her son’s hand. “Promise … me.”

Hugh, still a boy but with the suggestion of manhood on his beloved face, leaned close. “Promise what, Mum?”

“Where should we go?”

She closed her eyes but didn’t release his hand. How did a mother tell a boy of thirteen that his father would never return to them, that his father loved his whiskey more than his wife or his son and daughters? But she didn’t have to tell him. Hugh was a bright boy. He knew the truth, even if he didn’t want to accept it.

Elethea wanted a better life for her children. Perhaps her death could give them one. Dr. Cray had explained to her how poor and orphaned children of Chicago were being placed with families in the West, families who promised to care for them and love them and even to see that they were educated. There was little hope for the likes of Sweeney Brennan’s offspring in Chicago. Here, they were just three more street urchins who would soon be completely alone in the world.

Drawing a deep breath, she forced her eyes open one last time and drank in the beauty of her children. It mattered not that they were dressed in tattered, worn clothes or that their faces could use a good washing. They were beautiful and perfect to their mother.

The darkness that had lingered around the edges of the room began to close in.

The journey by train from eastern Wyoming to western Idaho hadn’t been a long one. Only a single night and a part of two days. Nonetheless, Felicia Brennan Kristoffersen felt bone weary by the time she stepped from the passenger car onto the platform, where a hot August breeze tugged at the skirt of her black dress. She longed for a cool drink of water. But first she had to find Mr. Swanson, the president of the Frenchman’s Bluff school board. He’d stated in his letter that he would be at the depot to meet her.

Whatever would she do if she couldn’t find him, if he hadn’t come for her after all? Her heart fluttered at the thought, but she quickly pushed the rising fear away. She wouldn’t give in to it. Not even for a moment. She’d allowed too much fear into her heart through the years. Never more so than in recent months. But no more. God had not given her a spirit of fear.

Tightening her grip on the valise, she walked toward the doors leading into the station. Just as her hand reached to open it, she heard someone speak her name.

Relieved, she turned to face a short, squat man with generous white muttonchops and a friendly smile. “Yes, that’s me. Are you Mr. Swanson?”

“Indeed I am. Have you been waiting long?”

“No. I disembarked only a few moments ago.”

“Good. Good. And your luggage? I assume there’s more than what you carry.”

“Yes. I have a trunk.” One trunk that held everything she owned in this world, although there was no need to tell him that.

Wordlessly, he held out his hand for her valise. She gave it to him and then followed him to the end of the platform, down a few steps, and around the side of the depot, where a buckboard pulled by two black horses awaited. Once there, Mr. Swanson dropped her valise into the wagon bed before helping her up to the seat.

“Be back directly, miss.”

After Mr. Swanson disappeared inside the station, Felicia felt herself relax. Her journey was almost at an end. No catastrophe had befallen her. Soon she would be settled in a home of her own and could begin making a new life for herself. All would be well.

She sat a little straighter on the wagon seat and looked about. The terrain was similar to the area in Wyoming where she’d spent the past sixteen years—sagebrush and sand-colored earth in abundance—except Boise City had come to life along a river at the base of a pine-topped mountain range. That river now watered farms throughout the valley via a system of canals and creeks, bringing a lush green to land that was otherwise baked brown by the late summer sun.

She turned to see Mr. Swanson walking toward the buckboard. Behind him was a porter pushing a cart that held her trunk. Thank goodness, for the heat was becoming unbearable, especially in her black gown and bonnet. She prayed it wasn’t a long journey to Frenchman’s Bluff.

Within minutes, Mr. Swanson had joined her on the wagon seat and the horses were turned away from the depot. They traveled east, leaving the city of Boise behind them. The road they followed was filled with ruts, and more than once Felicia wondered if her bones would be jarred from their sockets before they reached their destination.

“Folks are mighty excited that we’ll have ourselves a schoolteacher again,” Mr. Swanson said after a long period of silence.

Not for the first time, Felicia wondered how many other teachers had applied for the position before it was awarded to her. The salary was small, to be sure. It couldn’t possibly support a man with a family. Which meant most, if not all, applicants would have been unmarried women like herself. Why the school board had chosen Felicia was nothing short of a miracle. An answer to prayer, surely.

But what did it matter why they’d offered her the position? She had employment, and she was out on her own. She’d even been promised a house to live in rather than having to board with a different family each month. Such a luxury. She would no longer be dependent on the whims of others. She wouldn’t be responsible to anyone but herself and her God. And more important, she wouldn’t have to deal with another member of the Kristoffersen family ever again.

“Like I told you in my letter,” Mr. Swanson continued, drawing her thoughts back to the present, “we’ve been without a teacher since Miss Lucas moved away. Some of our womenfolk took over the instruction of the children as best they could to finish out the
session, but the school needs a trained teacher. Right glad we found you when we did.”

She offered the man a smile and a nod, but inside, turmoil erupted, as it often had since receiving the letter from Mr. Swanson offering her the position. What if she failed as a teacher? It had been years since she’d completed her training. How would she support herself if she didn’t succeed? For years she’d longed to leave the Kristoffersen homestead on the eastern plains of Wyoming, to experience a little bit of the world, but obligation had held her there. Now she had what she’d wanted, and she found herself scared half to death.

But could anything be worse than what I left behind?

She pictured Gunnar Kristoffersen, his face flushed. She heard his angry accusations and harsh demands. A shudder raced through her. No, it couldn’t be worse. Whatever lay ahead of her had to be better than what she’d left behind.

From the doorway of the small cottage, Colin Murphy watched as his daughter, Charity, placed the vase of roses in the indent of the kitchen table. She turned it this way and that, her mouth pursed and her eyes squinting, then adjusted it again and again.

His heart pinched at the memory. And it hurt even more knowing that Charity hadn’t learned it from her mother. His daughter had been only three when Margaret Murphy passed away. There’d been no time for her to learn the fine art of floral displays or her mother’s mannerisms.

“Of course she will,” he answered, moving a few steps into the kitchen. “All women seem to like roses.”

His daughter turned her large brown eyes on him. “I hope she’ll want to stay. Do you think Miss Kristoffersen will like it here? Enough to stay and keep teaching?”

He recognized her questions. It seemed his little girl had been eavesdropping on adult conversations again, something she’d been scolded for in the past. But Colin decided to let it go this time. He didn’t want to spoil her excitement. He just wished he felt a degree of the same enthusiasm.

Colin checked his pocket watch. If the train had arrived on time, Walter Swanson should show up with the new schoolmarm any moment now. “Come on, Charity. I need to get back to the store.”

His daughter was quick to obey, rushing on ahead of him while he closed the door of the cottage. Before she disappeared around the corner of the mercantile, she called back to him, “I’m gonna wait on the porch.”

Colin shook his head. Charity never did anything by halves. She was prepared to love Miss Kristoffersen, sight unseen, and she would be devastated if the teacher didn’t return those feelings.

He’d been against hiring another single female, especially one without actual teaching experience. Yes, she’d completed her teacher preparedness education at the State Normal School in Laramie, Wyoming, almost a decade earlier. Yes, she had all the appropriate credentials. But she’d never been employed as a teacher.

What if she wasn’t capable? What if the children suffered because of her inabilities? What if
Charity
suffered because of her inabilities? And more important, what if she didn’t last any longer than Miss Lucas or her predecessor? Just because Felicia Kristoffersen was willing to teach for the smaller fixed salary they’d offered didn’t mean they should have given her the position.

Hadn’t the board learned anything from their last two choices? As far as Colin could tell, all female teachers were more interested in gaining husbands than they were in the welfare of the children. A schoolmaster might have cost the town two or three hundred dollars more per year, but it would have saved them a world of grief in the end.

Now he could only hope the parents of Frenchman’s Bluff wouldn’t come to regret the board’s choice once again. With luck, Miss Kristoffersen would surprise him for the better. He would welcome a pleasant surprise.

He gave his head another slow shake as he walked through the storeroom of the mercantile, his gaze taking in the shelves on both sides of him, noting which ones were full and which ones needed to be restocked.