Read Beneath a Burning Sky (The Dawnhawk Trilogy Book 3) Online

Beneath a Burning Sky (The Dawnhawk Trilogy Book 3) 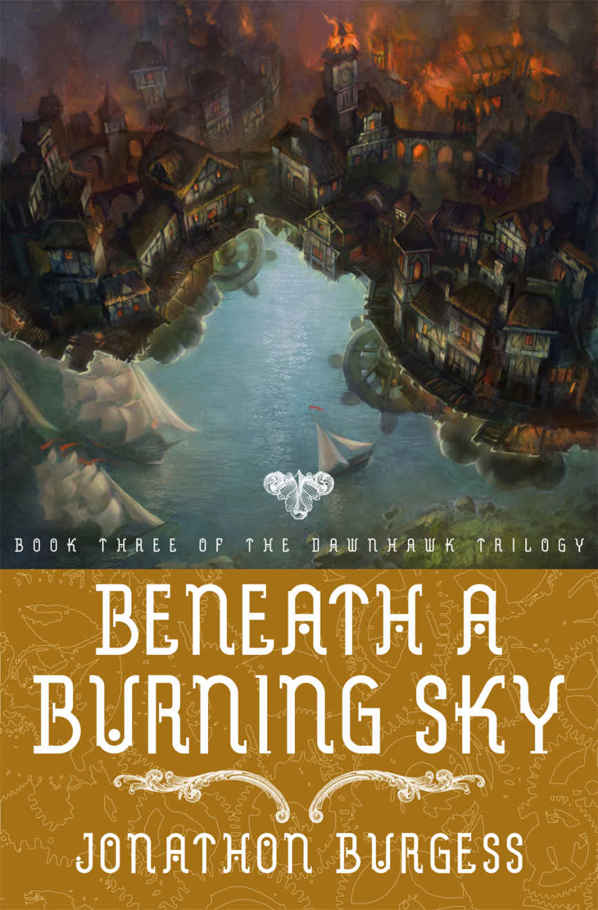 BENEATH A BURNING SKY

Book Three of the Dawnhawk Trilogy

Beneath a Burning Sky

All rights reserved. Neither this book or any portion thereof may be reproduced or used in any manner whatsoever without the express written permission of the author, except for the use of brief quotations in a book review.

This is a work of fiction. All events and characters in this work are fictitious. Any resemblance to actual events, locales, or persons living or dead, are purely coincidental.

Find out more about the author and the Dawnhawk Trilogy at www.jonathonburgess.com. 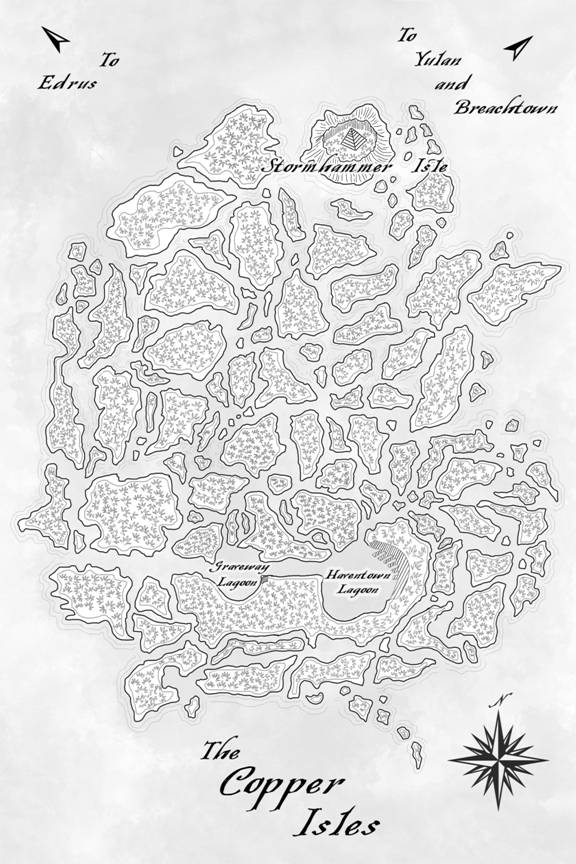 BENEATH A BURNING SKY

It was murky at the bottom of the sea.

Soft shafts of sunlight shone down from the surface above. They danced together, a shifting curtain only hinting at the twilight world of the ocean floor. Through this gloom swam lazy schools of fish, startled now into frantic activity by an armored mass that tore up the seabed and churned the water with its passing.

The Dray Engine was irritated. It wasn’t built for such an environment—in these depths it was awkward and ponderous. Worse, every piston-driven step it took lifted more sediment into the water, blinding it. The Dray Engine did not like being underwater.

Something swam past, all grey fins and silver skin. The Dray Engine darted forward, catching the shark between its burnished, reptilian jaws. Water churned all about them as the fish struggled, fighting in vain against the relentless mechanical pressure that trapped it. The Dray Engine savored the moment, then bit down and severed its prey. Two still-twitching pieces of shark fell through a hazy cloud of its own fresh gore. For a brief moment, the Dray Engine felt marginally less annoyed.

That brief satisfaction faded all too quickly. Something like despair replaced it, ticking its way through the clockwork mind of the ancient machine. What was it doing? Where was it going?

Its primary commandment burned clearly: to protect the designated sanctuaries of Voorn foundlings from enemy action. Failing that, a second objective was inscribed: to eliminate any non-Voornish threats to the Dominion. Dimly, it could recall performing such tasks. The memories were cloudy, though, almost as if they belonged to some other automaton, one from a different place and time.

More recent events, it remembered clearly. It had awoken in the great Foundry of Garaam, roused by an irritating, golden-eyed slave-human prancing across its back. To the Dray Engine’s disgust, the obnoxious creatures were everywhere, so numerous and appalling that creative interpretation of its second commandment had been immediately called for. Crushing them into paste had proven surprisingly amusing.

Afterward it left. But to the ancient machine’s dismay, it found itself not in a great and glorious city but a rural tropical isle, the aether-bands almost completely silent. As if that weren’t enough,
more
slave-humans appeared, and some even had the audacity to attack it. The resilient golden-eyed female, in particular, had proven so foolhardy.

One thing had led to another. When it was all said and done, the Dray Engine found itself far from the island, frustrated, lonely, and trapped on the silty bottom of the ocean. Even down here, though, the aether-bands should have been full of chatter. It should have been able to hear the voices of its masters. Were there even any Voorn still living left to command it?

The Dray Engine wanted guidance. Yet with none at hand, there were only two options: It could sit on the sea floor, waiting for authorized instruction. Or it could seek them out on its own.

A piece of it
wanted
to sit there. Some niggling built-in instinct said that this was exactly what it was supposed to do. Nevertheless, it gave a watery snort, chose the strongest still-existent signal on the aether-bands, and stomped off to find the source.

But it couldn’t shake the feeling that the journey would be pointless.

An upward slope gradually appeared on the seabed floor. The water around it lightened, revealing great forests of kelp growing straight up out of the sand. Overhead swam shining schools of fish, chased by sharks and squid in a maddened and chaotic free-for-all unfortunately too far away to reach.

The Dray Engine shook off its reoccurring malaise. The aether-signal was growing stronger with every step it took—it was going the right way. Even better, there was enough strength and complexity in the signal to mark it as more than background noise; it was unused, but it was definitely being broadcast by a Voorn installation. The Dray Engine found itself so excited that it only took the slightest detour to crush a large armored sea crab.

Fronds of kelp gave way to rocky piles of shimmering coral. Anemones grew here from the living stones, a decorative forest of fringed and floating polyps. The Dray Engine did not care. It stepped on as many as it could, ponderously crushing them, sending clown fish and eels racing off in a panic.

Then it surfaced. Water streamed off of its head, gushing out from between the chinks in its armored carapace to pour back into the sea. The Dray Engine found itself standing in the surf before a sandy beach that sloped up sharply to a bare and rocky hill. Other islands stood in the distance, their jungle-covered cliffs shot through with shining veins of copper, all set against the backdrop of a midday sky.

The details were unimportant. The Dray Engine could feel the pulsing of the aether-band. Whatever the originating source, it was located just ahead beyond the hill.

The Dray Engine strode up onto the shore, clambering straight up the rocky slope towards what seemed a flattened cliff top. The rock was brittle, giving easily, and the Dray Engine slid backward more than once. It roared out in vexation, redoubling its efforts until, with one last great heave of the pistons in its legs, it surmounted the slope.

And found nothing. The island was round and not overly large. Its center wasn’t simply flat but an empty crater with perfectly smooth rock walls dropping three hundred feet down to a forest of palm trees and wild vines.

Its masters had been here, once. In the center of the crater, rising from a grassy plain, shone the tip of a golden pyramid. Here, then, was the originating source of the aether-band signal that it had followed.

But the installation was broken, long abandoned. No watchful guardians patrolled the perimeter. No short-range communications were being sent. There was nothing for the Dray Engine here.

It bellowed in frustration. The roar echoed out across the crater, lonely and mocking. The Dray Engine roared again, then lowered its great reptilian head, sighing out a great gush of steam. It blinked its armored lenses and turned to leave.

The stony lip of the crater crumbled beneath the claws of its left foot. The Dray Engine shifted its weight in alarm, and the stone beneath its other foot gave way as well. It scrabbled desperately for purchase with taloned forelimbs, to no avail.

The Dray Engine slipped backward and fell into the crater.

Lina Stone peered out from the stairwell at the walking dead.

The Revenants milled about the cargo hold of the airship
Dawnhawk
. A single dying lantern provided illumination, revealing rotting jaws, cloudy eyes, and suppurating wounds. Tightly packed crates filled with plundered goods hemmed the monsters in. They would bump up against the waist-high barrier only to back away, staring down and groaning in confusion. A few would claw at the air reflexively.

One of them seemed to look at her. Lina swallowed, a thrill of fear climbing down her spine to mix with the disgust roiling in her belly. It probably couldn’t see her there, in the dark of the stairwell. Probably. Still, Lina shifted in her crouch upon the steps, inching backward.

“Well?” hissed Captain Fengel in a stage whisper. “Do you see it?”

Her captain crouched on the steps above her—notably, out of view of the Revenants. Thin slivers of light escaped the hooded lantern he held, illuminating his features artfully—something he’d probably done on purpose. Handsome enough, with a neat beard that he didn’t trim himself, the effect was somewhat ruined by the weirdly shaped monocle he had crammed into one eye. A tricorn hat and a blue Perinese officer’s coat completed his ensemble, along with the saber hanging awkwardly at his hip.

“No, I can’t,” Lina stage whispered back. “There’re crates and Revenants and the whole rest of the Goddess-damned hold in there. How did you lose your only other monocle?”

“It fell out of my pocket while we were bringing that last load aboard,” said Fengel. “I’m sure it fell down here.”

Lina glared at him. “If you hate the one you’re wearing, and you found this other one, why weren’t you
wearing
it?”

Fengel raised an eyebrow at her. “Because then I wouldn’t have a spare,” he replied. “Look, just get in there and find it. It’s probably on the floor.”

“What? Why ever not?” Fengel peered carefully around the corner. “I’m going to have the Mechanists replace that oil lamp when we get back into port. But it’s not
that
dark. Besides, I brought this lantern.”

He tried to pass it to her. Lina fought him off forcefully. “That’s not—stop! If I go in there, especially with a lantern, the Revenants will see me.”

“What? Rubbish. Some of them don’t even have eyes anymore. At any rate, Omari says they’re harmless. Mostly.”

“You weren’t in Breachtown!” she hissed. “And I trust that woman about as much as I do your grasp of finance!”

Her captain looked hurt. “That is uncalled for. I almost always pay off my debts. Anyway, look at them. Those things are hardly violent.”

Lina glanced back at the herd of corpses. She had to admit they seemed fairly docile at the moment. Not at all like the ones she’d fled in Breachtown. Though these were all former crewmen who’d died in that affair three months ago. They’d been friends, for the most part. No one wanted them around. Yet they couldn’t just throw them overboard into the sea either. Did that make the difference? Not for the first time, Lina reflected how awful it would be to be trapped, mindless, halfway between life and death.

A shuffling Revenant caught her eye. “Look,” she said. “It’s Jonas Wiley. He was an idiot, but not that bad, for a thug. He didn’t deserve to end up like this. No wonder his brother Nate’s been taking it hard.” Lina paused. “Though Jonas
was
always trying to look down my shirt.”

“I can’t imagine why,” mused Fengel, peering out into the cargo hold in repulsed fascination. “Not much there to see.”

Lina glared at him.

Lina glanced back into the hold. It was true; the Revenants no longer milled about. Now they faced the stairwell as one, eerily still, arms upraised towards them. The lantern on its chain above them flickered, flared, and went out.

Lina wouldn’t have gone into the dark for all the tea in Perinault, and she held a moment’s hope Fengel wouldn’t ask her to.

“Well,” said Fengel. “You’re definitely going to need this then.” He opened the shutter on his lantern, illuminating the darkened stairwell around them.

The Dark Gifts Birthright by Willow Cross
The Line That Binds Series Box Set by J. M. Miller
Jodi_ByTheLight by JenniferLitteken
It’s a Battlefield by Graham Greene
Stolen Vows by Sterling, Stephanie
Her Risk To Take by Toni Anderson
If You Dare by Liz Lee
Evil in a Mask by Dennis Wheatley
The Social Climber of Davenport Heights by Pamela Morsi
Lost Seraphine (The Seraphine Trilogy #2) by Leigh, KaSonndra