Read Beneath the Burn Online 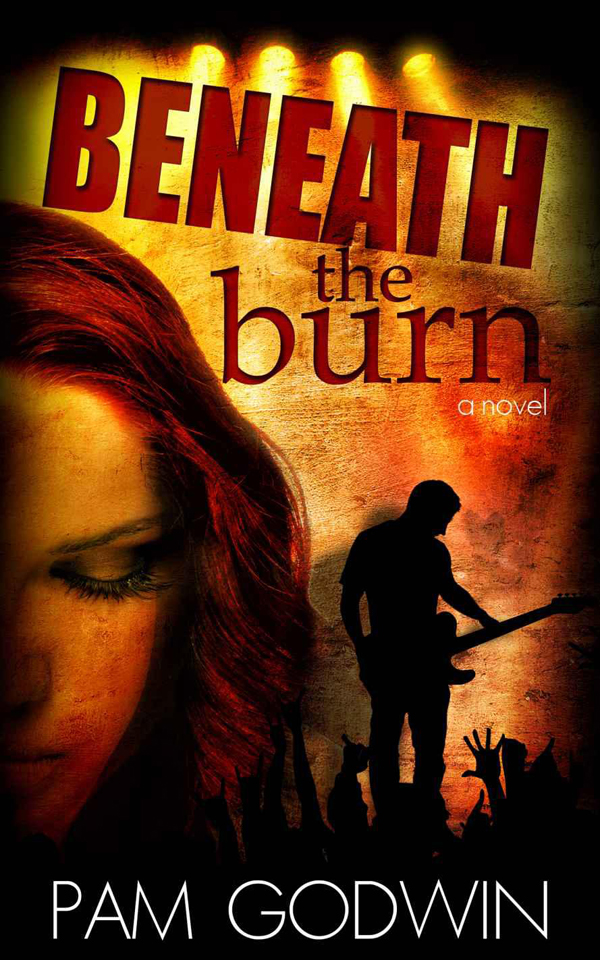 The aroma of rotting food crept in from a dumpster and clung to the humid air clogging the back of Jay Mayard’s van. The brunette writhing beneath him smelled worse. Stale smoke and hairspray infected her gaping pores.

Facedown and arms spread over a speaker box, she nudged him with her bony backside. “Come on, Jay. You’re so damn hot. I’m dying here.”

He ground his dick against her. He wasn’t hard, not even close. “I told you to shut up.”

“But I want you.” A husky, ashtray-laden whine.

He grabbed her neck, and she squeaked. Why was he even here? Maybe it was hope that sex would drown out the din in his head. Sometimes it worked. Sometimes it didn’t. Dammit. His dick had been hard when they left the bar. Maybe he’d picked the wrong groupie.

He drove her face into the casing. “If you keep your fucking trap shut, I’ll give it to you.”

He could do this. He needed this, as long as she didn’t touch him. “Put your hands on the edge. Yeah, just like that. Now hold on and don’t let go.”

She panted and wiggled as he fished for the condom in his pocket and unzipped his leathers.
Come on, fucker. Get hard.

The bastard lay limp against his thigh. He stroked it. Tried to drown out the body odor lingering in the band’s lived-in van. Tried to tune out the metal guitar chords vibrating from the back of the bar. Tried to attenuate his thoughts to the one thing that could give him five mindless minutes.

His cock half-woke. He wrapped it, positioned it, and worked it into her.

Numb. The hole encasing his dick offered nothing but empty, dead space. He might as well have humped the air. He thrust harder, deeper and felt nothing.

“Ahh, yeah, rock star. Give it to me.” She pumped her hips and smacked her gum.

Could she not feel him shriveling? He fisted her ponytail. “Shut. Up.” He released her hair with a shove of her head.

The pace of their thrusting increased, out of sync, but the finish would come. It had to. He kept his eyes open, focused on the music equipment stacked around them, the bed rolls he and his bandmates slept on, anything but the self-destructive thoughts prowling the edges of his mind.

Something moved over his thigh, clenched on his ass. He froze mid-thrust. His skin recoiled from the sensation. Fingernails raked down his leg, searing a trail of heat. Hurt. Burning skin. Oh God, too much burning.

He stumbled backward and knocked over his guitar case. “Never fucking touch me.” His roar was harsh and clotted with spit.

Glittery black smudges caked her round eyes. She didn’t know what was going on inside him, and she wouldn’t be around long enough to find out.

The condom fell off in his hand. He flung it at her. “Get the hell out.” His fingers shook as he stuffed himself in his pants and zipped up.

The clueless twat tried to rise from her squat on wobbly heels without bothering to pull down the skirt bunched at her waist. “You are one messed up motherfucker. What the hell is wrong with you?”

His memories were tearing open, spewing flickers of the shed, the rumble of the oven, the stifling darkness, the trudging footsteps, and the creaking door. Oh God, he needed to get out of there before he gave her a sampling of his madness.

He shouldered out the passenger door and jogged down the alley beside the bar. Boosting his pace, he left his bandmates celebrating their successful show with booze and girls. His sprint, however, put an effective distance from the bitch screaming after him.

“You’re just a wannabe rock star. You and your limp dick.”

He rounded the bend and slowed to plod along the main drag. He didn’t want to be a rock star. He wanted to lose himself in his music, singing and playing guitar, town after town, night after night. Above all, he just wanted to forget.

Nightclub crawlers lingered in the south St. Louis streets, hanging on one another and howling with unrestrained laughter. He could be right there with them, immersed in all the trappings of a good time, if he figured out how to deaden his hang-ups.

He could go back to the van and write a song. He could find another groupie to screw. Or he could get high. Temporary distractions. He needed something permanent, something that would erase the hideous reminders that sucked sound judgment from his brain and his dick.

A tattoo could do that. A needle hammering ink into the second layer of skin was about as permanent as he could get. He’d wanted one for years, just couldn’t work up the courage to expose his skin.

Fuck it.
He’d spotted a shop on his way to the show. If it was still open, it was meant to be.

Another turn. Another crosswalk. He veered around the milling bodies, the parked cars, the huddled groups of smokers.

There it was, Kilroy Tattoo illuminated in neon overhead. It flickered then blinked off. Shit. He checked his watch. Midnight. The door knob turned.

A woman with a white-blonde pixie haircut backed out of the shop, and dammit if he could stop himself from gawking. She was slender but not in a bones-pressing-skin kind of way. She had a figure that could only be toned with good nutrition and rigorous activity. Oh yeah, she was built for stamina.

She locked the door and turned toward him, tipping back her head.

The bluest eyes he’d ever seen stared up at him. They were ringed with navy and glimmered with silver flecks. They were also wide with…fear? No, that couldn’t be true if her smile were anything to go by. Her beautiful face seemed to swallow up the glow of the streetlamps, the passing headlights, the goddamned moon.

Oh Christ, her voice. It was the complete package, like the full-bodied Fsus2 chord humming from the hole in his Martin Acoustic. Gentle, cool, hypnotic—

She had no idea. “Just found what I’m looking for.”
Smooth, Jay
. What the hell was he doing? Shades of pink tinted the curve of her cheeks and parted lips. Distractingly adorable. He smiled despite himself. “I need some work done.”

Those perfect lips formed an
O
. “Well, crap. I’m closed for the night. Come back tomorrow. I open at two.”

“I’m only in town tonight.” He dug out his wallet and held up his last bill. Small venues like Lewey’s only earned a couple hundred bucks split between the band, the roadies, and the bar tab. “It’s all I got, so it’ll be a quick job.” He would worry about his next meal later.

She chewed the corner of her lip, hand on the door knob, eyes on his twenty. “I’m supposed to be somewhere—”

“Fifteen minutes is all I ask. I really need this. Please?” He was a bastard for begging, for making her late, but he had to know if a tattoo would help. And now he had to know
her
.

The twenty was tugged from his grip. She pocketed it, unlocked the door. “Fifteen minutes.” She pointed her key ring at him. “Since this is a quickie, don’t expect much.”

He smiled for the second time in two minutes and followed her through the door.

The lights flickered on, illuminating a counter, a workbench, and a padded massage table. Otherwise, the space was empty. Bare walls. No artwork. Nothing personal. Even odder, she didn’t have a single tattoo on her toned arms, flat midriff, or the gorgeous swells of her tits, which were on display courtesy of her tiny tank top.

She plopped onto a wheeled stool and rolled before him. Her huge stunning eyes wandered from his neckline to his Chucks as if seeing through his clothes. He lengthened his spine, flexed a bicep. He didn’t want her to stop.

“You’re nervous. You must be a virgin.”

His preening withered. “Excuse me?”

A dimple dented her cheek. “Your first tat, playboy?”

“Right.” The thump of his heart sped up as he turned to give her his back. This would be the worst part. Would she try to hide her initial shock? Would she sputter in failed politeness? No one had seen him shirtless outside a doctor’s office since he was a boy. Oh Jesus, could he do this?

He grabbed the back of his t-shirt, yanked it over his head, and waited for the gasp.

It never came. Instead, the spiked heel of her sandal tapped the tile floor. “So many options, so much we can do.”

She must have been schooling her voice. Not a hint of sympathy or horror. He kept his back to her, avoiding the pity he knew she wouldn’t be able to hide in her eyes. “Just cover it. One big sheet of black.”

A sigh. “Please don’t ask me to defile you. You should highlight these. Turn them into an artistic reflection.”

What? His back was an atrocity. He didn’t want art. He wanted eradication. “Cover what you can in the time we have.”

“The scars look old. That helps, but doesn’t guarantee all of them will take ink. What do you say we celebrate them? Not”—air brushed his back under her waving hand—”bury them under bullshit.”

Every muscle in his body went taut. She knew nothing about him, the presumptuous brat.

“Whatever your reason for wanting them covered, you should ask yourself, really think about it.” She shifted behind him, leaned over his shoulder, and spoke low in his ear. “Would the veil work?”

The answer hardened his jaw to the point of pain. “It’s none of your fucking business. Either give me twenty bucks in ink or return my money and I’ll be on my way.”

Her silence was a heavy weight at his back. It prompted him to glance over his shoulder. There was neither pity nor indignation in the gaze glued to his scars. Her front teeth gnawed on a paint-chipped fingernail. What was going through that gorgeous head of hers?

Why did he have the sudden urge to prostrate himself at her feet? She wasn’t some magic solution to his problems. Hell, women in general made his issues unbearable. “One more condition. Don’t touch me.”

“You can only touch my back with the paper towel and heel of your gun hand.”