Read Beyond the Bounty Online 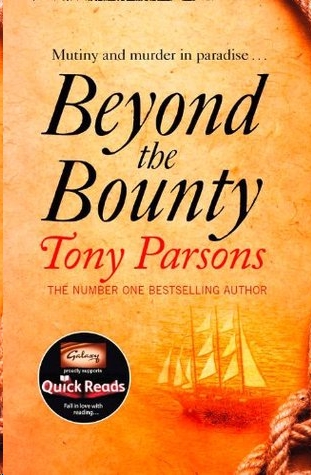 Beyond the
Bounty
Tony Parsons

For my father, the old sailor who told me, ‘One hand for the ship – one hand for yourself.’

The mutiny on HMS
Bounty
occurred in the South Seas on 28th April 1789.

The men who joined the mutiny set Captain Bligh and those loyal to him adrift in a small boat, many thousands of miles from the known world.

After sailing further, the mutineers settled on the island of Pitcairn, which was not yet on any map. Here the
Bounty
was burned to stop it being found by the Royal Navy.

This is his story.

3. Wives of the
Bounty

5. The Woman on the Cliff

Our ship, the
Bounty
, was made of English oak and it made a mighty fire.

We watched her burn from the shore of the tiny island. She was the ship that had been our home, our prison and our mad dream of freedom. The ship that had carried us to the end of the world.

And before this night was over, our captain would burn with it.

The night was full of the sound of the animals we had brought ashore and the crackle of burning wood. But there were no human sounds. Not until our captain howled with pain.

‘You burn our ship?’ cried Fletcher Christian. ‘You fools! Then how will we ever go home?’

We watched him row out to the
Bounty
. We made no move to help or to hinder him. We just stood watching on the narrow beach of soft sand at the bottom of steep white cliffs.

What a strange little party we were – eight English sailors from the
Bounty
, six men and eleven women from Tahiti, one of them with a babe in arms. After our many adventures on the rocky road to Eden, and after leaving some of our fellow sailors on Tahiti, that was all that we had left to build a new world. One of the women was crying. This was Maimiti, daughter of the King of Tahiti, a great beauty and wife of our captain, Fletcher Christian.

We saw him reach the
Bounty
, climb on deck and go below. He stood out like a little black insect against the flames. We watched him throw useless buckets of water on the burning masts, the flaming sails and the smoking deck.

We knew it was a battle that he could never win. When his clothes began to smoke and flame, we knew he knew it too.

We watched him come back. Slowly, wearily. Rowing with the good arm he had left.

There was not much to be done. He was badly burned and the life was already ebbing out of him. We lay him down on that narrow sandy beach. We gave him water. The women comforted his wife.

And I held him as he died.

Some of the men wept.

The Tahitians who thought he was some kind of god. And even a few of the English seamen, who also placed him high above other men.

I held him, but I was dry-eyed. Because I had never liked Fletcher Christian.

That’s always what he was to me –
Mister
Fletcher bloody Christian.

From the first moment I saw him, looking dapper in his fine midshipman’s clothes on the deck of HMS
Bounty
as we set sail on 23rd December 1787 from Spithead, to the last moment I saw him dying of those terrible burns more than two years later on the beach of Pitcairn.

I never cared for the fellow.

Oh, I know the ladies in smart drawing rooms back in London probably still get all weepy when they think of Mister Fletcher Christian – so tall, so handsome, so doomed. And I knew men who would have followed Fletcher Christian to the gates of hell and beyond.

But he was not for me.

I knew him. Not the legend but the man. I saw his kindness and his courage when he faced down our first captain, William Bligh.

I knew Fletcher Christian and I choked on the smell of his burning flesh as he died in my embrace. And I could see clear enough what the rest of the world saw in him too.

He was blue-eyed and fair-haired, broad-shouldered and topping six foot. Clean of mind – at least until he fixed his telescope on those Tahitian maids – and clean of limb. Brave as a young lion.

He stood up to Bligh’s foul cruelty when it would have been the easy thing to go below deck and puff his pipe and read his Bible. Instead Fletcher Christian led us, and he steered the
Bounty
and the mutineers into history.

Even at the moment of his death, Fletcher’s heart was made of the same sturdy English oak as our ship. But I believe that we broke his heart when we torched the
Bounty
as she lay in the bay.

And most of all we burned her to avoid Fletcher Christian having the bright idea of going home to dear old England to explain our actions to some judge who would hang us all.

For that was what he wanted – our leader, our young lion, our Mister Fletcher Christian – he wanted to explain our mutiny to those in England.

The rest of us were willing to settle for watching fifty years of sunsets with some Tahitian maid under a palm tree. And keeping the hangman’s rope from our mutinous necks.

But he was good, you see.

The men. The women. The world. But what they loved about Mister Fletcher Christian was what made me, in some secret chamber of my heart, turn away from the man.

And our captain was crucified upon that cross.

Mr Christian – was ever a legend more fittingly named? – thought he was better than other men.

Perhaps he was right. Perhaps.

He certainly always thought it. He had the rock-solid confidence of the upper-class Englishman.

A bit of a snob, our Mister Christian.

He may have believed that our first cruel captain, Bligh, was wicked and evil and a monster. It is true that Bligh would smile at the sight of the whip being brought out as if it was the sun breaking through grey clouds, or an orange in a stocking on Christmas Day.

But I reckon that Fletcher Christian also believed that William Bligh was from the gutter.

I reckon that Mr Christian thought that rough William Bligh was little better than the scum and rascals who made up the crew of the
Bounty
on our mad mission to bring back breadfruit from the South Seas of the Pacific Ocean.

Still, Fletcher Christian was impressive. I will give him that.

They are building their bloody Empire on the likes of Fletcher Christian. They think that men like him (the brightest, the best) are leading the likes of me (the rankest, the worst).

Fletcher sipped his port. The men got roaring drunk on rot-gut rum. Fletcher fluttered his eyelashes at the ladies. We whored. Fletcher was a cultivated man. We could just about make our mark if you were to guide our hand. You get the picture.

Fletcher Christian was a gentleman.

More than us. And more than Bligh. But
better
than the rest of us? Mister Fletcher Christian clearly thought so.

But in my experience of this wicked world, all men are much the same.

The
Bounty
burned all night.

As the sun came up over the South Seas, the ship that had carried us so far was meeting its end in flames fifty feet high.

It was a day as close to Paradise as I ever saw in this world. The sky above the island was so blue that it made your heart ache to behold such beauty.

A soft breeze was moving through the palm trees like a mother’s sigh. And the heat – it was that soothing heat that we found on the island, that calming heat we found at the end of the world.

Even as I held my dying captain in his final minutes, I was not sorry that we had burned the
Bounty
. Because we wanted this Eden to last.

We did not want to go back to England. There, we would have to tell our story and to make our case. To throw ourselves at the dubious mercy of some bewigged bastard of a judge.

After much careful reflection, we had no wish to sail back to England and face justice that would have had us all dangling on the end of a rope. We would hang – twitching and shitting and eyes bulging, our tongues turning black as our dear old mothers wept and the crowd roared with delighted laughter.

Go back to that?

No thank you, Mister Christian, sir.

‘Ned, I am done for,’ he croaked. ‘Tonight I shall walk the streets of glory, and sit with angels in the realm of the Lord.’

You could see he was quite looking forward to it. The angels. The clouds. The business of comparing halos. The way he told it, dying was like shore leave that lasted for all eternity. Without the pox and the sore heads. You could see the attraction.

Then he writhed and twisted with that terrible pain. Fire is a terrible way to go. Give me water. Give me my lungs full of salt water in Davey Jones’ locker for a year rather one minute of the pain that Mister Fletcher Christian endured at the end of his short and famous life.

‘No, Ned – it is still our old and beloved England,’ he gasped. ‘Justice, Ned. The truth.’ He fought for breath here, for he was overcome by the pain. ‘What is right and what is wrong,’ he continued. ‘Standing for liberty against tyranny. Standing for Christian values in the face of all that is cruel and wicked. That was our choice – the way of Captain Bligh or my way, Ned.’

As though all goodness and right belonged to him alone. He coughed a bit at this point. Mostly blood, although also some yellow substance which did not look too promising.

‘They would have listened,’ says he.

But even a cold, hard-hearted scoundrel such as myself could not fail to be moved by the death of Mister Fletcher Christian.

My eyes ran with tears and I knew that, despite everything, I loved him.

Not that I ever liked him much.

But I can’t deny that I loved him.

I could feel the fire in my blood. The
Bounty
crackled and shrieked like a living thing. It died hissing and spitting as it dropped its masts into the boiling water. And then, just as the sky was turning pale pink in the east, the
Bounty
collapsed beneath the sea.

For a few minutes there were wispy trails of grey smoke curling from the surface, and then they were gone too.

It was as if our ship had never existed.

‘Ned,’ Fletcher Christian whispered. And it was no more than a faint whisper now, this close to the end. ‘Don’t leave me. Don’t let me go alone, Ned.’

‘I’m here,’ I sobbed, holding him as tight as I could without causing him even more pain. ‘I’m here, and here I will stay. I shall not go until you are gone. I promise you that. You have my word, Mister Fletcher Christian, sir.’

Pure Dead Wicked by Debi Gliori
The Erasers by Alain Robbe-Grillet
In the Heat of the Spotlight by Kate Hewitt
Triple Trouble by Lois Faye Dyer
Swans Landing #1 - Surfacing by Shana Norris
The Camp by Karice Bolton
The Truth According to Us by Annie Barrows
The Pattern in the Carpet: A Personal History With Jigsaws by Margaret Drabble
Ramona and Her Father by Beverly Cleary
El diccionario del Diablo by Ambrose Bierce