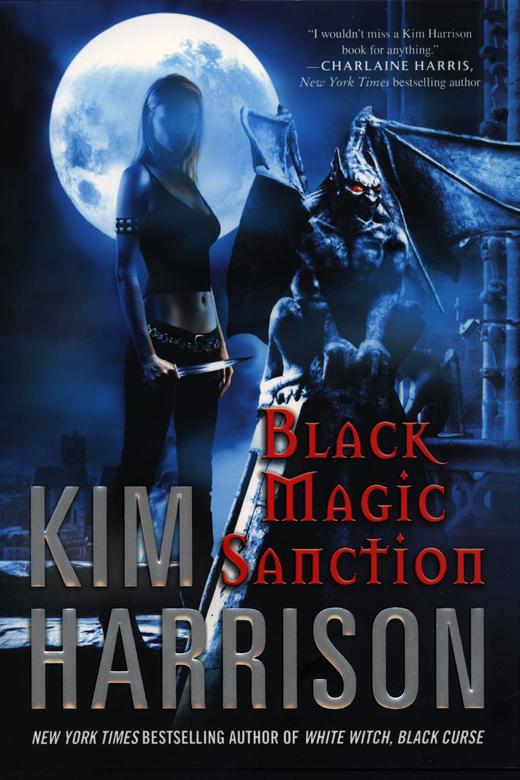 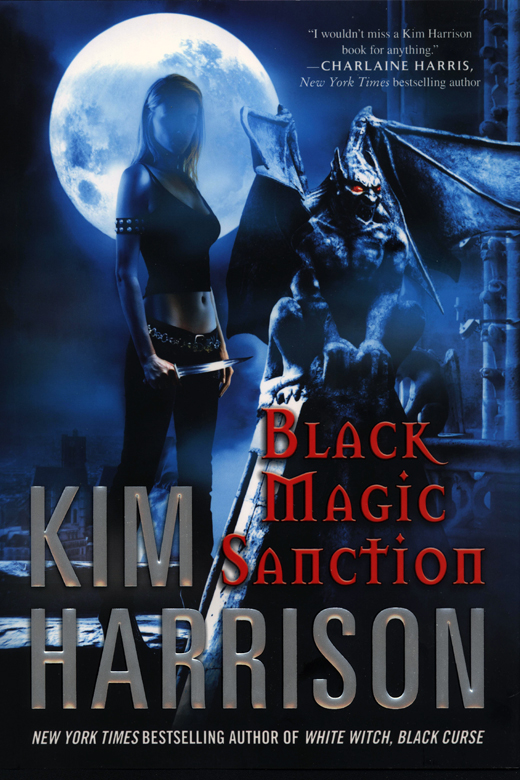 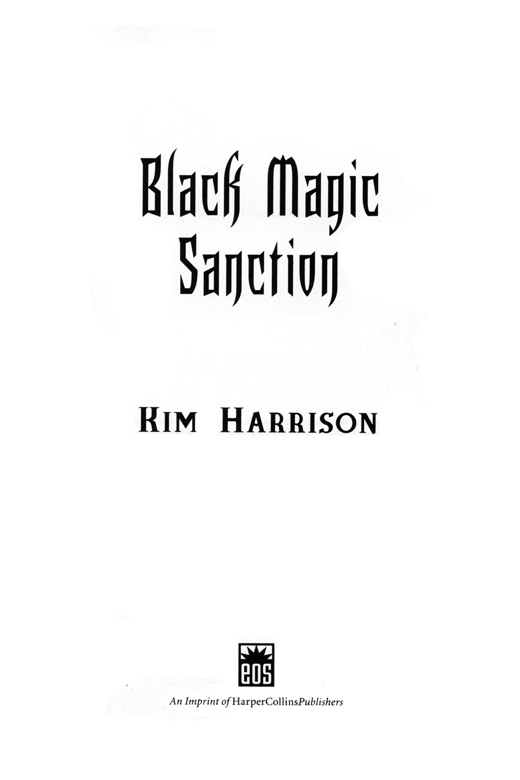 This book is a work of fiction. The characters, incidents, and dialogue are drawn from the author's imagination and are not to be construed as real. Any resemblance to actual events or persons, living or dead, is entirely coincidental.

Eos is a federally registered trademark of HarperCollins Publishers.

To the guy in the leather jacket

I'd like to thank Richard Curtis, my agent, and Diana Gill, my editor. The more I know, the more I appreciate them and what they do.

T
ucking my hair back, I squinted at the parchment, trying to form the strange angular letters as smoothly as I could. The ink glistened wetly, but it wasn't red ink, it was blood—my blood—which might account for the slight tremble as I copied the awkward-looking name scripted in characters that weren't English. Beside me was a pile of rejects. If I didn't get it perfect this time, I'd be bleeding yet again. God help me, I was doing a black curse. In a demon's kitchen. On the weekend. How in hell had I gotten here?

Algaliarept stood poised between the slate table and the smaller hearth, his white-gloved hands behind his back. He looked like a stuffy Brit in a murder mystery, and when he shifted impatiently, my tension spiked. "That isn't helping," I said dryly, and his red, goat-slitted eyes widened in mocking surprise, peering at me over his smoked spectacles. He didn't need them for reading. From his crushed green velvet frock to his lace cuffs and proper English accent, the demon was all about show.

"It has to be exact, Rachel, or it won't capture the aura," he said, his attention sliding to the small green bottle on the table. "Trust me, you don't want that floating around unbound."

I sat up and felt my back crack. As I touched the quill tip to my throbbing finger, my unease grew. I was a white witch, damn it, not black. But I wasn't going to write off demon magic just because of a label. I'd read the recipe;
I'd
interpreted the invocation. Nothing died to provide the ingredients, and the only person who'd suffer would be me. I'd come away from this with a new layer of demon smut on my soul, but I'd also have protection against banshees. After one had nearly killed me last New Year's Eve, I'd willingly entertain a little smut to be safe. Besides, this might lead to a way to save Ivy's soul when she died her first death. For that, I'd risk a lot.

Something, though, felt wrong. Al's squint at the aura bottle was worrisome, and his accent was too precise tonight. He was concerned and trying to hide it. It couldn't be the curse. It was just manipulating an aura, captured energy from a soul. At least... that's what he said.

Frowning, I glanced at Al's cramped handwritten instructions. I wanted to go over them again, but his peeved expression and his soft growl convinced me it could wait until the scripting was done. My "ink" was running thin, and I dabbed more blood from my finger to finish some poor slob's name, someone who trusted a demon... someone like me.
Not that I really trust Al,
I thought, glancing at the instructions once more.

Al's spelling kitchen was right out of a fantasy flick, one of four rooms he had recovered after selling almost everything to keep his demon ass out of demon-ass jail. The gray stone walls made a large circular space, most of which was covered in identical tall wooden cabinets with glass doors. Behind the rippled glass, Al kept his books and ley-line equipment. The biological ingredients were in a cellar to which access was through a rough hole in the floor. Smoky support beams a good forty feet up came to a point over a central fire pit. The pit itself was a round, raised affair, with vent holes to draw the cold floor air in by way of simple convection. When it got going, it made a comfortable spot for reading, and when fatigue brought me down, Al let me nap on the benches bracketing it. Mr. Fish, my beta, swam in his little bowl on the mantel of the smaller fire in the fireplace. I don't know why I'd brought him from home. It had been Ivy's idea, and when an anxious vampire tells you to take your fish, you take your fish.

Al cleared his throat, and I jumped, fortunately having pulled my quill from the parchment an instant before. Done, thank God. "Good?" I asked, holding it up for inspection, and his white-gloved, thick-fingered hand pinched it at the edge where it wouldn't smear.

He eyed it, my tension easing when he handed it back. "Passable. Now the bowl."

The gray bowl was rough in my hand, the inside inscribed with scratched-off words of power. Only the newly scribed name I was etching would react. The theory was to burn the paper and take in the man's name by way of air, then drink water from the bowl, taking in his name by water. This would hit all four elements, earth and water with the bowl, air and fire with the burning parchment. Heaven and earth, with me in the middle. Yippy skippy.

The foreign-looking characters were easier after having practiced with the parchment, and I had it scratched on a tiny open space before Al could sigh more than twice. He'd taken up the bottle of aura, frowning as he gazed into the swirling green.

"What?" I offered, trying to keep the annoyance from my voice. I was his student, sure, but he would still try to backhand me if I got uppity.

Al's brow furrowed, worrying me even more. "I don't like this aura's resonance," he said softly, red eyes probing the glass pinched in his white-clad fingers.

I shifted my weight on my padded chair, trying to stretch my legs. "And?"

Al's focus shifted over his glasses to me. "It's one of Newt's."

"Newt? Since when do you need to get an aura from Newt?" I asked. No one liked the insane demon, but she was the reigning queen of the lost boys, so to speak, and knew everything—when she could remember it.

"Not your concern," he said, and I winced, embarrassed. Al had lost almost everything in his effort to snag me as a familiar, ending up with something vastly more precious but broke just the same. I was a witch, but a common, usually lethal genetic fault had left me able to kindle their magic. Al's status was assured as long as I was his student, but his living was bleak.

"I'll just pop over and find out who it is before we finish this up," he said with forced lightness, setting the bottle down with a sharp tap.

I looked at the assembled pieces. "Now? Why didn't you ask her before?"

"It didn't seem important at the time," he said, looking mildly discomfited. "Pierce!" he shouted, the call for his familiar lost in the high ceilings coated in shadows and dust. Mood sour, he turned to me. "Don't touch
anything
while I'm gone."

"Sure," I said distantly, eying the green swirling in the bottle. He had to borrow an aura from Newt? Jeez, maybe things were worse off than I'd thought.

"The crazy bitch has a reason for everything, though she might not remember it," Al said as he tugged his sleeves over his lace cuffs. Glancing at the arranged spelling supplies, he hesitated. "Go ahead and fill the bowl. Make sure the water covers the name." He looked at the image of an angry, screaming face scribed into his black marble floor. It was his version of a door in the doorless room. "Gordian Nathaniel Pierce!"

I pushed back from the table as the witch popped into the kitchen atop the grotesque face, a dish towel over his shoulder and his sleeves rolled up. "I'd be of a mind to know what the almighty hurry is," the man from the early 1800s said as he tossed his hair from his eyes and unrolled his sleeves. "I swan, the moment I start something, you get in a pucker over nothing."

"Shut up, runt," Al muttered, knowing that to backhand him would start a contest that would end with Pierce unconscious and a big mess to clean up. It was easier to ignore him. Al had snared the clever witch within an hour of his first escape, the demon taking great pains to keep us apart during my weekly lessons until Al realized I was ticked with Pierce for having willingly gone into partnership with Al. Partnership? Hell, call it what it was. Slavery.

Oh, I was still impressed with Pierce's magic, which far outstripped mine. His quick one-liners, in his odd accent, aimed at Al when the demon wasn't listening still made me smirk. And I wasn't looking at his long, wavy hair, or his lanky build, much less his tight ass, damn it. But some time shortly after seeing him naked under Carew Tower's restaurant, I'd lost the teenage crush I'd had on him. It might have been his insufferable confidence, or the fact that he wouldn't admit how deep in the crapper he was, or that he was just a little too good at demon magic, but for whatever reason, that devilish smile that had once sparked through me now fell flat.

"I'm stepping out for a tick," Al said as he buttoned his coat. "Merely checking something. A tidy curse is a well-twisted one! Pierce, make yourself useful and help her with her Latin while I'm gone. Her syntax sucks."

"Gee, thanks." The modern phrases sounded odd with Al's accent.

"And don't let her do anything stupid," he added as he adjusted his glasses.

"Hey!" I exclaimed, but my eyes darted to the creepy tapestry whose figures seemed to move when I wasn't looking. There were things in Al's kitchen that it was best not to be alone with, and I appreciated the company. Even if it was Pierce.