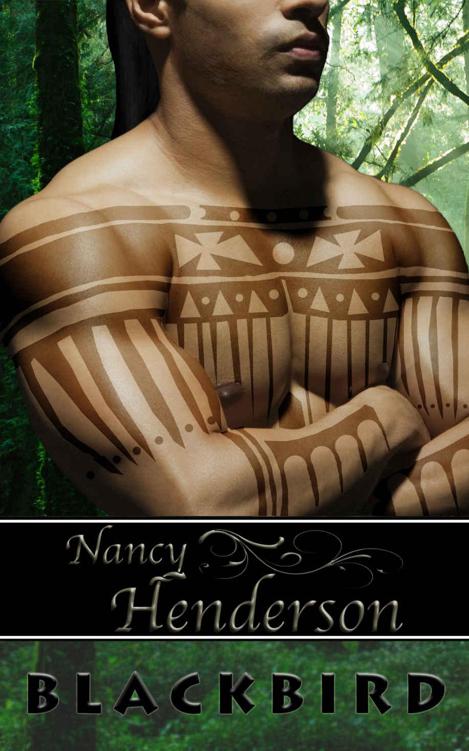 Blackbird is a work of fiction.  The characters, situations, and all dialogue are entirely a work of fiction and are not in any way representative of actual people or events.  Any resemblance to persons living or dead is entirely coincidental.

No part of this publication may be reproduced or transmitted in any form or by any means electronic, mechanical, photocopying, recording or otherwise, without prior written permission by the author.

Want to know when a new Nancy Henderson book comes out?

Sign up to be notified (Right hand side of the home page under “Newsletter”):

To my readers.  You guys are the best!

THEY were the meanest looking eyes Katherine St. James had ever seen.

She had been so preoccupied with thoughts of Joshua that she failed to see the Indian standing directly behind her until she turned and nearly crashed into him.

He stood in the center of her empty classroom, the very picture of danger.  And every inch of her feared him.  Katherine’s her gaze trailed from his red and blue trimmed jacket, over his bare chest, and up to the silver gorget hanging from his neck.  His skin was dark like her Oneida Indian students, and he wore similar buckskin leggings and breechclout.  Black hair had been plucked out on each side of his head, but the back fell freely over his shoulders. One of his ears was pierced with copper rings.  He carried a flintlock musket tall enough to reach from floor to his shoulder, but Katherine fixed her stare on the war club and tomahawk hanging from his belt.

She swallowed.  Although she had seen many Oneidas Indians while teaching at Joshua’s--Reverend Knox’s--mission, she had never seen one dressed for war.  The Oneidas were friends to the Colonists, the only group of natives to side with them against England.  This man certainly was no Oneida.  An Oneida would never wear a Redcoat’s jacket.

Katherine fought the urge to scream.  Thomas, Joshua’s assisting layman, had gone hunting.  Robert, his other assistant, who was only fourteen, would be of little use.

She backed away, panic growing rapidly.  Perhaps this Indian sought money or trade goods like so many Oneidas did when they visited.

She swallowed again.  “May I help you?”

“Where is Knox?”  His voice was as rough as his harsh exterior.

At thirty-two, Joshua Knox was rapidly becoming a powerful figure in Colonial politics.  The British saw him as a threat.  Local settlers favoring British rule accused him of treason to England, his mother country, and some churches even called him a traitor to God.  They accused him of using religion as a tool to bribe the Oneidas into siding with the Colonials against the British.  Katherine denied all those claims.  Joshua was as devoted to God as he was to the cause.  He was a good, decent man.  And she loved him.  Regardless that he had so far refused to return her feelings.

She boldly held the man’s black glare.  “What do you want with him?”

“Where is Knox?”  The Indian raised his voice, obviously irritated with her.

Katherine edged further away.  “Albany.  He has a meeting with Reverend Wheellock.  Thomas and Robert won’t let you do anything--”

To her surprise, the Indian abruptly turned toward the door.

Katherine watched him head toward the woods, and her concern for Joshua rapidly grew to worry.  The Indian would come back.  Judging by his Redcoat’s jacket, he was a British sympathizer, and by Colonial standards, Joshua’s enemy.  She had to protect Joshua.

She hurried after the Indian, her kid-skin boots resounding on the hard pine-planked steps of the mission house.  “Wait! Tell me what you want with Joshua!”

Perhaps it was the tone of her demand.  At the edge of the trees, the Indian turned toward her, his black eyes indignant.  “I will come for Knox in five sleeps.  I will take Knox to Fort Ontario where the soldiers of the Great King across the Sea will speak with him.  Colonel Butler seeks to know why Knox twists the minds of our Hodenosaunee brothers, the Oneidas.”

Colonel John Butler was the British Indian agent responsible for getting the Mohawks to side with England. The Butlers, John and his son, Walter, were the troublemakers.  They only sought to make this war bloodier and longer than necessary.

“What tribe are you from?” she boldly demanded.

“Tell Knox the Ganeagaono will eat his heart for twisting the minds of our brothers.”

Ganeagaono.  So he was Mohawk, an Algonquin meaning Eaters of Men.  Joshua had explained that the Mohawks, as well as the Oneidas, belonged to an Indian League of Nations who settlers usually referred to as the Iroquois.  The native term for this group of tribes was Hodenosaunee.  While the Oneidas had chosen to befriend the Colonials, the Mohawks had allied with the British.  Since siding with the king, these Mohawks had brought a river of hellfire down the Mohawk Valley, burning farms and slaughtering innocent families by the score.  And this man probably had many Colonial scalps in his possession.

Yes, this man was dangerous.  Probably very dangerous. Probably the most dangerous Indian with which she had ever come face-to-face.  And he wanted to take Joshua to Colonel Butler, his British superior.  Then what?  Would the Mohawks really eat his heart?

A dangerous notion left her heart pounding.  What if she went in Joshua’s place?   Although some of the Oneida elders seemed to resent her, none harmed her.   What she knew of Mohawk culture suggested that women were generally spared violence.  This Indian was not likely to slay her. Besides, he was on business for the British and would have to answer to them for his actions.

If she did not go with this Indian now, then he would surely wait for Joshua to return.  That brought a horrible picture to mind:  Joshua’s scalp hanging on the Indian’s belt.

No, she could not let that happen.  She would talk to the British on Joshua’s behalf and clear up any misunderstandings, restoring his name and his reputation.  Joshua would be proud of her.  Proud enough to love her.

Fort Ontario was a fortnight away.  The trip would be dangerous, but nothing great was obtained without danger.  She may be putting herself at risk, but was not the Colonial cause--and Joshua’s love--worth the risk?  Hundreds of innocent settlers were losing their lives over this impending war.  Someone needed to set down with the British and discuss things in a civilized manner.  And that someone would be her.  The British officials would object to her being a woman, but Joshua had taught her about the cause, and she could do it.  Joshua had everything recorded in his journals.  He had documented every transaction between the cause and the Oneidas. He even had the minutes of the council he had attended with the Oneidas last winter.  Their sachem had agreed to make war on the British.  It was all there.  It was all written proof, and if she brought it with her to Fort Ontario, they would realize she was in earnest, and they would listen to her.  They had to.

Mustering all her courage, she boldly held the Indian’s black glare.  “Take me to Butler instead.”

His frown deepened, and for a moment, Katherine wondered if he would strike her.  Instead, he turned his back to her and walked toward the woods.

The Indian stopped and turned.  His face was a mask of stone.

“I can help.  I assist Reverend Knox in writing The Frontier Crier.  Perhaps you’ve heard of it?”  She motioned him back toward the mission.  “Come back.  Please.”

The Indian did not move.

She marched toward him.  “Look, I’ve worked with Joshua for over five years.  Let me talk to Colonel Butler.  I can clear up any misunderstandings he may have.  I have documents.  Proof of the legitimate work Reverend Knox has done.  Just let me go back inside and get them, and we’ll go, all right?”

Katherine started toward the mission but, fearing he would be gone when she returned, she stopped.  “Do we have an agreement or not?”

He seemed to ponder her proposal for a moment.  Then he motioned toward the mission.  “You hurry.  I will not wait long.”

Katherine’s heart picked up pace, and she hurried inside.  She climbed the ladder to the stuffy loft which served as Joshua’s office.  A voice inside her screamed that this was foolish, that it was perhaps the most senseless thing she would ever do to win Joshua’s affections, but she ignored it.  Everything would be all right.  She would clear Joshua’s name at Fort Ontario, and Joshua would be so proud of her.  He would have to love her.  This time.

She hurriedly pulled Joshua’s brocade valise from behind a trunk and stuffed his documents and journals inside it.  Then she turned around and screamed.  The Indian was standing directly before her.

He started down the ladder.  “Come!”

She followed him down and her thoughts raced.  Maybe this was not wise.  This man--this Mohawk--was obviously dangerous.  He could easily kill her and leave her body in the forest, and no one would ever know.

But she had been with these people--with the Oneidas, anyway--for over a year now, and they had not harmed her.  If she did not go now, this Indian would come back for Joshua and perhaps hurt him.  She could not risk that.  She could not risk Joshua being harmed any more than she could risk a future without his love.

She trailed the Indian’s heels, but stopped when she reached the edge of the forest.  “Wait!  I have to tell Robert I’m leaving.”

Without waiting for him to bark at her again, she hurried to the barn where the boy tended the two oxen, Daisy and Delilah.  “Robert?”

Robert looked up from the lathe he was working over.  His mouth fell open.

Katherine knew the Indian was right behind her.

Yanking a pitchfork from the wall, Robert pointed it at the Indian.  “Kate, get back!”

The boy had no more than grabbed the pitchfork, before the Indian had his tomahawk raised.

Katherine jumped in front of the Indian.  “No!  Don’t hurt him.  He’s just a boy.  Robert, put down the pitchfork.”

Robert let go of the pitchfork.  “Are you a Mohawk?”

The Indian lowered his tomahawk.

“Thank you.”  Katherine breathed a sigh of relief, her eyes never leaving the man’s glare.  “Yes, Robert.  He’s Mohawk, and I’m going to Fort Ontario with him on a business matter.  Tell Tom I’ll be back in a few days.”

“No.  You will do as I said.”  She gave him a quick hug.  Robert was small for his age, and his height barely reached her shoulders.  “I’ll be fine.  Really.”

“But Tom said to stay put until he gets back.”

“Tom would understand that I’m helping Reverend Knox.  Now wait here for Tom and tell him I’ll be back in a few days.”

Robert glanced at the Indian then back at her.  At last, he nodded.  Katherine ruffled his dark hair.  “I’ll be fine.”

And she prayed it was the truth.