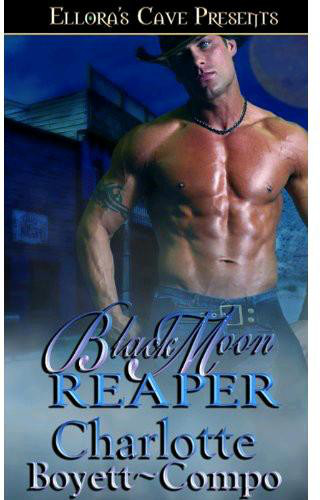 With the exception of quotes used in reviews, this book may not be reproduced or used in whole or in

part by any means existing without written permission from the publisher, Ellora’s Cave Publishing,

Warning: The unauthorized reproduction or distribution of this copyrighted work is illegal. No part of

this book may be scanned, uploaded or distributed via the Internet or any other means, electronic or

print, without the publisher’s permission. Criminal copyright infringement, including infringement

without monetary gain, is investigated by the FBI and is punishable by up to 5 years in federal prison and

editions and do not participate in or encourage the electronic piracy of copyrighted material. Your

support of the author’s rights is appreciated.

This book is a work of fiction and any resemblance to persons, living or dead, or places, events or locales

is purely coincidental. The characters are productions of the authors’ imagination and used fictitiously.

On the agricultural world of Ildathach

A horned owl swooped across the blood-red moon, field mouse struggling in its

brutal talons. The giant span of its wings cast an elongated shadow upon the frost-laden

ground as it spread over the ragged peaks of drying corn bundles. White tails twitching,

a herd of deer moved slowly, gracefully through the field in search of the stray ear of

corn. Raccoons and foxes scavenged, causing the dried leaves to rustle eerily in the

left from the harvesting and Phelan Kiel was dying.

until his ribs had cracked and his bones broke. In agony from the judicial torture under

which he had been sentenced, the breath slowly leaching from his wrecked body, blood

trickling from ears, nose and mouth, Kiel prayed for the death coming to take him. No

longer able to make even a single sighing sound, he silently begged for release, for an

end to the agony.

Able only to turn his head, he gave in to the need to take one last look at his

accuser. Standing a few yards away, Truian Sayle was the only villager who had stayed

to see the execution to its end. That was only because Truian had a vested interest in

making gods-be-damned sure Phelan met his fate, that no last-minute words were

spoken so the sentence would be stopped. Truian wanted Phelan gone beyond this

Their eyes met—tormented amber and triumphant gray. Once upon a time those

amber eyes had gazed into the gray with love—deep abiding love and rampant desire.

Now they revealed only sadness and regret, and the light was fading in the golden orbs.

Though no words could be spoken, Phelan struggled to mouth three last words

then the light faded from his eyes. He stilled with his dead gaze locked eternally on his

accuser. One final hiss of air—the death rattle his watcher had been waiting to hear—

pressed from his body and he was gone.

Truian Sayle released a long, ragged breath, turned and began walking away from

the body of a man who had once been friend. At dawn tomorrow the village priest

handsome in the Province. Hopefully the predators would not destroy that glorious

visage before it could be sealed forever beneath the canopy of stone.

and stopped. It was a struggle not to turn and look back as the Gatherer winged to the

Sheidaghan
or
Iurin
—Heaven or Hell. For just one wild moment Truian started to turn,

to gain a look at the Transporter of the Dead, but that moment passed and the one

responsible for Phelan Kiel’s death continued on over the hill.

“That had to have hurt like hell,” Reaper Second Class Iden Belial commented.

“Sure trumps my freezing to death in an ice cavern on Othar.”

Phelan and Iden were sitting on Phelan’s back porch in the Vircars Territory,

watching the sun go down and listening to the cicadas whistling through the trees.

Their conversation was unusual for Reapers rarely discussed among themselves how

they had come into being. Death was their constant companion, but talk of it was

avoided if at all possible. Once having experienced it, none wanted to repeat the ordeal.

But this late afternoon was different and the Reapers had opened old wounds, old

memories, putting voice to things that bothered them.

“Aye, it did,” Phelan agreed, “but not as much as Truian’s betrayal.” He pushed his

bare feet against the porch rail, causing his chair to rock as he sipped the remaining

whiskey in his glass.

“Betrayal always hurts more than physical pain,” Iden observed. He too was

bootless, sitting with his ankles crossed over the rail, relaxing in the rocking chair, the

“Do you think Owen has forgiven Eanan for his betrayal?” Phelan asked.

Iden laced his fingers together over his flat belly. “Aye, I believe so. Being a father

“Poor Eanan with three women,” Phelan said, shaking his head. “How does a man

keep his sanity about him being lover to three women at once?”

His fellow Reaper chuckled. “I still can’t believe any man would be so foolish, yet

Eanan is a bit different,” he said. “But, there again, it was Morrigunia who put his feet

on that slippery slope.” He wiggled his bare toes. “Just as She put our feet on every

“Sometimes at night I wake in a cold sweat thinking about when I died,” Phelan

said. “I remember the pain searing through my back when She transferred the hellion

into me. I often wonder if Truian saw Her that night.”

“Hard to miss a huge copper-scaled dragon bearing down on you,” Iden said. “I

well remember watching Her approach me in the cavern, hearing Her claws scratching

against the ice and thinking ‘Boy, you’re toast’.”

Phelan nodded. “She came to me as the Old Woman of the Triune,” he said. “I

never saw Her as the dragon until much later. In that form She is something to behold.”

“Aye, She is.” Iden swiveled his head on the back of the rocker. “How came you to

be pressed to death instead of hanged? Isn’t hanging the prescribed sentence on

Ildathach
for what was considered your crime? It is on Othar and every other world I

know except this one.”

A slow smile formed on Phelan’s lips. “They could not hang the son of the king,

Belial. That punishment is reserved for commoners.”

“You were a prince?” Iden queried, shock making his eyebrows shoot up into the

thick thatch of black hair hanging low over his forehead.

“For what it was worth,” Phelan said, and finished off his whiskey. “Firstborn son,

ill-conceived child, the blackest sheep our clan had ever known because I declined the

“The Chosen One,” Iden translated.

Phelan’s voice was regretful. “Aye. Never in the long history of the Kiel Clan had

such a thing been done. My parents were shamed by my actions and could not

Çhymsee
, the Sacred Assembly Hall, and my sins were laid before it. I disgraced my

Phelan closed his eyes. “Love is never a sin in the eyes of those in love,” he replied.

“It is only a sin in the eyes of those who make it so.”

defend your right to it.”

Opening his eyes just as the last rays of the sun faded from the horizon, Phelan

turned to the youngest Reaper of the cadre. “I thank you for that, Iden.”

“Judge not lest you be judged.” Iden shrugged then drew his legs in, stood and

stretched. “I’d best be going. I’ve a long journey ahead of me.”

“You can spend the night, you know.”

“I know, but I’ll have a few hours of travel under my belt by the time I’m ready to

call it a day.” He looked out over Phelan’s property. “I feel twitchy, you know? Itchy.

“Aye,” Phelan agreed. “I’ve been feeling that way ever since we left the Citadel. I’m

going to be leaving at first light to inspect the far western parts of my territory. I haven’t

been over that way in a while.”

“I can’t get Lord Kheelan’s words out of my mind,” Iden said as he hitched up his

leather uniform pants. “About the Ceannus leaving behind cybots programmed to

awake at a given time. When is that time, Phelan, and where?”

“If the Shadowlords don’t know, how are we supposed to?” Phelan countered.

“That’s not all that bothers me. Glyn believes he brought something here to this world

“But what?” Iden questioned.

“I’ve no idea,” Phelan replied. “I spoke to Glyn before we left the Citadel and he is

worried, Iden. He thinks this new threat is hiding deep under the waters off the coast of

either Vircars or Flagala so that makes it our dominium, yours and mine.”

“Could that be what’s making me so gods-be-damned twitchy?”

boots,” Phelan answered. “And the thing is, Lord Kheelan believes it was this new

him Transitioning out of cycle. Those are two problems we sure as hell don’t need. We

101 Nights of Great Sex by Laura Corn
Changing Of The Guard (Book 6) by Ron Collins
Fight By The Team (Team Fear Book 2) by Cindy Skaggs
Cracking the Sky by Brenda Cooper
Sins of the Past by Keyonna Davis
Fear the Dark by Chris Mooney
A Day in the Life of a Smiling Woman by Margaret Drabble
On a Farther Shore by William Souder
Parasite Soul by Jags, Chris
Una muerte sin nombre by Patricia Cornwell