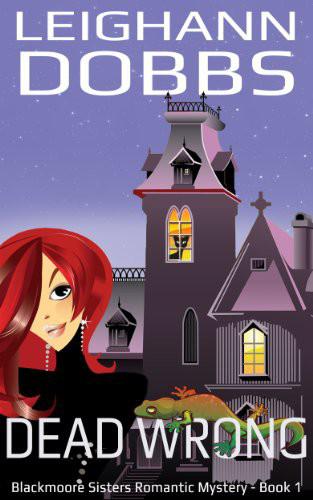 A Note From The Author

No part of this work may be used or reproduced in any manner, except as allowable under “fair use,” without the express written permission of the author.

More Books By This Author:

3 Bodies and a Biscotti

Snow White and the Seven Rogues

Morgan Blackmoore tapped her finger lightly on the counter, her mind barely registering the low buzz of voices behind her in the crowded coffee shop as she mentally prioritized the tasks that awaited her back at her own store.

“Here you go, one yerba mate tea and a vanilla latte.” Felicity rang up the purchase, as Morgan dug in the front pocket of her faded denim jeans for some cash which she traded for the two paper cups.

Inhaling the spicy aroma of the tea, she turned to leave, her long, silky black hair swinging behind her. Elbowing her way through the crowd, she headed toward the door. At this time of morning, the coffee shop was filled with locals and Morgan knew almost all of them well enough to exchange a quick greeting or nod.

Prudence had a long running feud with the Blackmoore’s which dated back to some sort of run-in she’d had with Morgan’s grandmother when they were young girls. As a result, Prudence loved to harass and berate the Blackmoore girls in public.

Morgan’s eyes darted around the room, looking for an escape route.

“Just who do you think you are?” Prudence demanded, her hands fisted on her hips, legs spaced shoulder width apart. Morgan noticed she was wearing her usual knee high rubber boots and an orange sunflower scarf.

Morgan’s brow furrowed over her ice blue eyes as she stared at the older woman’s prune like face.

“Don’t you play dumb with me Morgan Blackmoore. What kind of concoction did you give my Ed? He’s been acting plumb crazy.”

Morgan thought back over the previous week’s customers. Ed Littlefield
had
come into her herbal remedies shop, but she’d be damned if she’d announce to the whole town what he was after.

She narrowed her eyes at Prudence. “That’s between me and Ed.”

Prudence’s cheeks turned crimson. Her nostrils flared. “You know what
I
think,” she said narrowing her eyes and leaning in toward Morgan, “I think you’re a witch, just like your great-great-great-grandmother!”

Morgan felt an angry heat course through her veins. There was nothing she hated more than being called a witch. She was a Doctor of Pharmacology with a Master Herbalist’s license, not some sort of spell-casting conjurer.

The coffee shop had grown silent. Morgan could feel the crowd staring at her. She leaned forward, looking wrinkled old Prudence Littlefield straight in the eye.

“Well now, I think we know that’s not true,” she said, her voice barely above a whisper, “Because if I was a witch, I’d have turned you into a newt long ago.”

Then she pushed her way past the old crone and fled out the coffee shop door.

Fiona Blackmoore stared at the amethyst crystal in front of her wondering how to work it into a pendant. On most days, she could easily figure out exactly how to cut and position the stone, but right now her brain was in a pre-caffeine fog.

Where was Morgan with her latte?

She sighed, looking at her watch. It was ten past eight, Morgan should be here by now, she thought impatiently.

Fiona looked around the small shop,
Sticks and Stones
, she shared with her sister. An old cottage that had been in the family for generations, it sat at one of the highest points in their town of Noquitt, Maine.

Turning in her chair, she looked out the back window. In between the tree trunks that made up a small patch of woods, she had a bird’s eye view of the sparkling, sapphire blue Atlantic Ocean in the distance.

The cottage sat about 500 feet inland at the top of a high cliff that plunged into the Atlantic. If the woods were cleared, like the developers wanted, the view would be even better. But Fiona would have none of that, no matter how much the developers offered them, or how much they needed the money. Her and her sisters would never sell the cottage.

She turned away from the window and surveyed the inside of the shop. One side was setup as an apothecary of sorts. Antique slotted shelves loaded with various herbs lined the walls. Dried weeds hung from the rafters and several mortar and pestles stood on the counter, ready for whatever herbal concoctions her sister was hired to make.

crystals. Three antique oak and glass jewelry cases displayed her creations. Fiona smiled as she looked at them. Since childhood she had been fascinated with rocks and gems so it was no surprise to anyone when she grew up to become a gemologist and jewelry designer, creating jewelry not only for its beauty, but also for its healing properties.

The two sisters vocations suited each other perfectly and they often worked together providing customers with crystal and herbal healing for whatever ailed them.

The jangling of the bell over the door brought her attention to the front of the shop. She breathed a sigh of relief when Morgan burst through the door, her cheeks flushed, holding two steaming paper cups.

“What’s the matter?” Fiona held her hand out, accepting the drink gratefully. Peeling back the plastic tab, she inhaled the sweet vanilla scent of the latte.

“I just had a run in with Prudence Littlefield!” Morgan’s eyes flashed with anger.

“Oh? I saw her walking down Shore road this morning wearing that god-awful orange sunflower scarf. What was the run-in about this time?” Fiona took the first sip of her latte, closing her eyes and waiting for the caffeine to power her blood stream. She’d had her own run-ins with Pru Littlefield and had learned to take them in stride.

“She was upset about an herbal mix I made for Ed. She called me a witch!"

“What did you make for him?”

“No wonder Prudence was mad…although you’d think just being married to her would have caused the impotence.”

Morgan burst out laughing. “No kidding. I had to question his sanity when he asked me for it. I thought maybe he had a girlfriend on the side.”

Fiona shook her head trying to clear the unwanted images of Ed and Prudence Littlefield together.

Morgan put her tea on the counter, then turned to her apothecary shelf and picked several herbs out of the slots. “I know, but she always seems to know how to push my buttons. Especially when she calls me a witch.”

Fiona grimaced. “Right, well I wish we
were
witches. Then we could just conjure up some money and not be scrambling to pay the taxes on this shop and the house.”

Morgan sat in a tall chair behind the counter and proceeded to measure dried herbs into a mortar.

“I know. I saw Eli Stark in town yesterday and he was pestering me about selling the shop again.”

“What did you tell him?”

“I told him we’d sell over our dead bodies.” Morgan picked up a pestle and started grinding away at the herbs.

Fiona smiled. Eli Stark had been after them for almost a year to sell the small piece of land their shop sat on. He had visions of buying it, along with some adjacent lots in order to develop the area into high end condos.

Even though their parents early deaths had left Fiona, Morgan and their two other sisters property rich but cash poor the four of them agreed they would never sell. Both the small shop and the stately ocean home they lived in had been in the family for generations and they didn’t want
their
generation to be the one that lost them.

The only problem was, although they owned the properties outright, the taxes were astronomical and, on their meager earnings, they were all just scraping by to make ends meet.

All the more reason to get this necklace finished so I can get paid
. Thankfully, the caffeine had finally cleared the cobwebs in her head and Fiona was ready to get to work. Staring down at the amethyst, a vision of the perfect shape to cut the stone appeared in her mind. She grabbed her tools and started shaping the stone.

Fiona and Morgan were both lost in their work. They worked silently, the only sounds in the little shop being the scrape of mortar on pestle and the hum of Fiona’s gem grinding tool mixed with a few melodic tweets and chirps that floated in from the open window.

Fiona didn’t know how long they were working like that when the bell over the shop door chimed again. She figured it must have been an hour or two judging by the fact that the few sips left in the bottom of her latte cup had grown cold.

She smiled, looking up from her work to greet their potential customer, but the smile froze on her face when she saw who it was.

Sheriff Overton stood in the door flanked by two police officers. A toothpick jutted out of the side of Overton’s mouth and judging by the looks on all three of their faces, they weren’t there to buy herbs or crystals.

Fiona could almost hear her heart beating in the silence as the men stood there, adjusting their eyes to the light and getting their bearings.

“Can we help you?” Morgan asked, stopping her work to wipe her hands on a towel.

Overton’s head swiveled in her direction like a hawk spying a rabbit in a field.