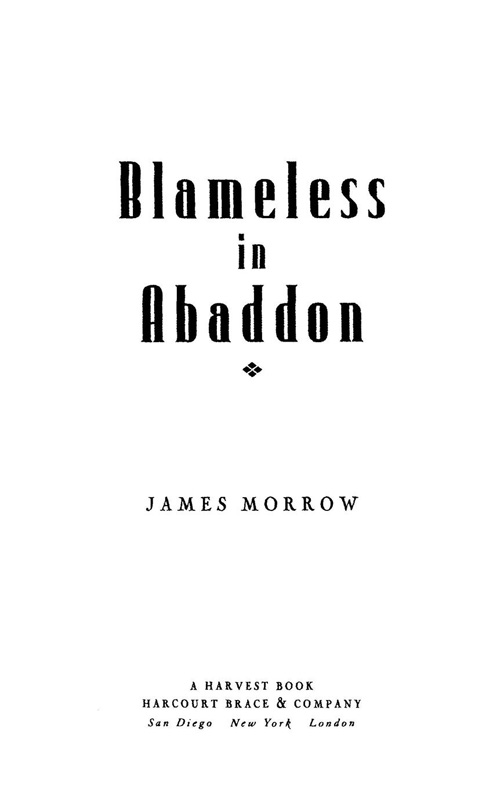 GOD IN THE DOCK

The Library of Congress has cataloged the print edition as follows:
Morrow, James, 1947â

D
URING MY ODYSSEY
through theodicy I was guided by many thinkers in the persons of their books. Let me here acknowledge my debt to Marilyn McCord Adams and Robert Merrihew Adams's
The Problem of Evil
, Peter Adam Angeles's
The Problem of God
, John Hick's
Evil and the God of Love
, C. S. Lewis's
The Problem of Pain
, Edward H. Madden and Peter H. Hare's
Evil and the Concept of God
, H. J. McCloskey's
God and Evil
, Terrence W. Tilley's
The Evils of Theodicy
, and Melville Y. Stewart's
The Greater-Good Defence.
Jeffrey Burton Russell's four-volume history of evil incarnateâ
The Devil, Satan, Lucifer
, and
Mephistopheles
âwhile not a theodicy per se, contains much tough-minded speculation on the conundrum of suffering. Interpretations of the Book of Job are as numerous as the sores on his body. The three I found most valuable are William Safire's
The First Dissident
, John T. Wilcox's
The Bitterness of Job
, and Carl Jung's
Answer to Job.

To the best of my knowledge, all of the disasters catalogued by the prosecution team actually occurred. For those interested in pursuing this subject, I recommend Stuart Flexner and Doris Flexner's
The Pessimist's Guide to History.
In constructing the cystic fibrosis case presented in chapter twelve, I drew on several sources, including Frank Deford's
Alex: The Life of a Child.
Certain details of Robert FranÃ§ois Damiens's execution come from Michel Foucault's
Discipline and Punish.

In the underworld the shades writhe in fear, the waters and all that live in them are struck with terror. Sheol is laid bare, and Abaddon uncovered before God.

The conservative has but little to fear from the man whose reason is the servant of his passions, but let him beware of him in whom reason has become the greatest and most terrible of the passions. These are the wreckers of outworn empires, disintegrators, deicides.

O
F ALL THE NEWSWORTHY OBJECTS
torn loose from the ice by the great Arctic earthquake of 1998, among them an intact Viking ship and the frozen carcass of a woolly mammoth, the most controversial by far was the two-mile-long body of God. The debate, oddly enough, centered not on the Corpus Dei's identityâthe body was accompanied, as we shall see, by an impeccable pedigreeâbut rather on its metaphysical status. Was God dead, as the nihilists and the
New York Times
believed? Only in a coma, as the Vatican and Orthodox Judaism dearly hoped? Orâthe Protestant consensusâwas the Almighty as spiritually alive as ever, having merely shed His fleshly form as a molting mayfly sheds its husk?

Prior to the peculiar events that constitute my tale, it looked as if the mystery might never be solved. The Corpus Dei's proprietors, devout Southern Baptists all, were ill inclined to sanction platoons of scientists tramping around inside His brain, leaving muddy footprints on His dendrites as they attempted to ascertain His degree of life or death. Moreover, as upholders of the theologically comforting Mayfly Theory, God's keepers rightly feared that such an expedition might yield signs of neural activity, thereby reinforcing the far more troublesome Coma Theory.

As for me, I wholeheartedly agreed with the ban on journeys into His cerebrum. Being the Devil, I have strong opinions about how human beings ought to conduct themselves. Unlike the Baptists' views, however, my own are shaped more by prudence than by piety. It is always wise, I feel, to leave well enough alone. It is best to let sleeping gods lie.

The sign on the courtroom door read
JUSTICE OF THE PEACE
, though neither justice nor peace figured reliably in Martin Candle's occupation, which was largely a matter of enforcing leash laws, reprimanding jaywalkers, trying petty criminals, collecting overdue parking fines, and performing civil wedding ceremonies.

Martin pursued his calling in Abaddon Township, Pennsylvania, a staunchly Republican enclave spread across a wide valley twenty miles north of Philadelphia. Abaddon was a quiet and prosperous world, a place of lush parks, rolling farmlands, and bedroom communities with names like Fox Run and Glendale. The township's best feature, everyone agreed, was Waupelani Creek, a luminous stream winding gently through the valley from north to south, threading its settlements together like the string connecting the beads on a rosary. Minnows thrived in the Waupelani. Garter snakes slithered along its banks. Water striders walked Jesus-like on its surface. A rare and beautiful species, of fish lived in these waters as well, a yellow-scaled carp whose collective comings and goings on brilliant summer days transformed their habitat from a conventional brook into a river of molten gold. Bisecting the backyard of Martin's childhood home in Fox Run, the Waupelani afforded him many happy hours of ice-skating, catching crayfish, and sailing the battleships he'd nailed together from stray scraps of lumber found in the basement. Only after he'd grown up, moved to Glendale, obtained a degree from Perkinsville Community College, and won his first election did it occur to him that Waupelani Creek had actually functioned in his boyhood as a toyâthe best toy a child could wish for, better than a tree fort or a Lionel electric train set.

Abaddon Township's odd appellation traced to a warm summer evening in 1692, when a Quaker schoolmaster named Prester Harkins spied the Devil himself sitting in the boggy marsh that drained the valley's brooks and streams. The Evil One was taking a bath. Harkins saw his iron-bristled scrub brush. Although the schoolmaster was in fact suffering from a nascent case of paranoid schizophrenia, his neighbors all gave credence to his hallucination, and before long the marsh and its environs had acquired one of Hell's more evocative epithets,
Abaddon
being the Hebrew name both of a demonic angel and of the Bottomless Pit from which he hailed. By the time the twentieth century arrived, however, the township's citizens had forgotten the meaning of
Abaddon.
To them, it was merely an adequate name for an adequate suburb, a word outsiders were forever mispronouncing by accenting the first syllable. “Rhymes with Aladdin,” the natives routinely informed visitors. “Emphasize the
bad
,” they addedâa strangely Augustinian motto for a citizenry whose sense of original sin could hardly be called acute. While occasionally one of Martin's neighbors would experience the sort of dark depression that commonly overtook less fortunate Americans, the average Abaddonian gave no thought to the fact that he was living in Hell.

Like many individuals who remain in their home communities while their friends venture into the wider world, Martin battled a fear that he was, and always would be, a failure. Under such circumstances a man will typically take an extreme view of his vocation, either regarding it as a kind of penance (somewhere between emptying bedpans in a paupers' hospital and working an oar on a slave galley) or elevating it beyond the bounds of reason. Martin opted for apotheosis. Upon winning the electorate's approval with his dignified bearing, athletic figure, and dark-eyed, sandy-haired good looks, he retained its loyalty through diligence and probity, considering each case as if the fate of nations hung on the outcome. Eventually even Democrats were voting for him. Although he held no advanced degreesâa person could ascend to the office of JP in those days with nothing but a college diploma and a working knowledge of local ordinancesâhe was as devoted to the ideal of justice as anyone on the faculty of Harvard Law School. His rulings were inspiringly fair, his methods upliftingly thorough. Judge Candle would never stop at suspending an alcoholic's license following a drunk-driving conviction; no, he would also try maneuvering the offender into rehabilitation. When an adolescent shoplifter came his way, he was never satisfied to convict, fine, and rebuke the thief; he would next attempt to uncover the root of the felony, visiting the young person's parents and urging everyone toward family counseling.

Even the weddings gave Martin an opportunity to find glory in his judgeship. When two people choose to be married before a justice of the peace, it's a good bet that something interesting has gone wrong in their lives, and the typical ceremony found Martin functioning more as a priest or therapist than as a magistrate. In about ten percent of these cases, one member of the couple was terminally ill. In twenty-five percent, the bride was pregnant. In forty percent, the proposed matchâJew to Christian, Protestant to Catholic, white to blackâhad proven unpalatable to one of the affected families. On three occasions, Martin had wed a man to a man; twice, a woman to a woman. Although these same-sex unions scandalized many of his fellow Republicans, he performed them with equanimity, believing that the principle of laissez-faire should apply no less to the bedroom than to the marketplace.

Commonly, the couple in question could not afford to rent a suitably dignified locale in which to exchange their vows, and they were understandably loath to use their own accommodations: a run-down trailer park or your parents' living room is an inauspicious platform from which to launch a new, connubial life. Learning of the couple's plight, Martin would immediately offer them the back parlor of his bachelor's apartment. The rug was clean, the furniture tasteful, and the light sufficiently dim to make the Masonite paneling look like oak. In their nervousness many couples would forget an essential prop or two, and so he kept his parlor stocked with marriage paraphernalia. The bride and groom were invariably amazed when, just as panic was about to possess them, Martin would coolly open a plywood cabinet and remove an imitation-gold wedding ring, a pair of scented candles, a bouquet of silk flowers, a box of latex condoms, or a bottle of Cook's champagne.

The most imaginative nuptials occurred not in Martin's parlor but in the world at large. He always brought his wedding props along, securing them carefully inside his briefcase before climbing into his white Dodge Aries and setting off to stamp the Commonwealth of Pennsylvania's imprimatur on the venerable urgings of the flesh. Once he wed two scuba enthusiasts at the bottom of the Schuylkill River, everyone dressed in wet suits and breathing bottled air. Another time he joined two skydiving aficionados as they floated above the Chestnut Grove Country Club, the bride's veil trailing behind her like a superheroine's cape. He would never forget uniting a pair of Perkinsville bohemians as they copulated vigorously on their waterbed, so that they might enjoy the unique experience of beginning the act as fornicators and completing it as a legal entity.