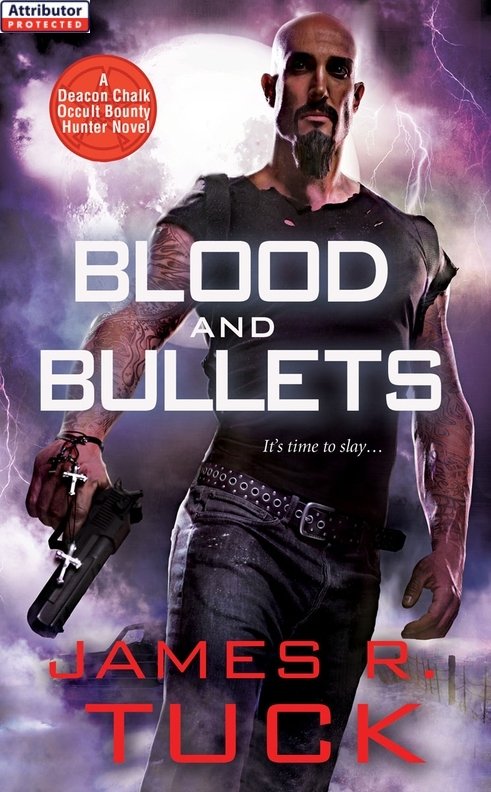 BLOOD AND BULLETS
There was a blink, a tiny fraction of a moment, with her becoming motionless like only the dead can. It was less than a second, but she stiffened and her skin became like stone. In a breath it was over and her imitation of life flowed back into her like magick. She acted like she was breathing, and her skin became soft and pliable again. If I had been a normal guy or maybe not holding her so close, I would have missed it, but now I had what I needed. If Gregorios was here, he was in that room, behind the metal door.
Now I just had to get in there without getting me or Larson killed in the process.
“I'm sorry, sugar, that room is not open right now; it's being remodeled.” She batted her long eyelashes at me.
Grabbing my coat sleeve, she pulled me to a room. My mind was racing. I needed to figure out how to get rid of Blair, get in the dungeon, deal with a 600-year-old vampire and whoever he had guarding him, and keep Larson alive. All before dawn. Should be no problem for a big damn hero like myself.
Yeah, right.
Advance praise for James R. Tuck and
Blood and Bullets
!
“
Blood and Bullets
is bursting at the seams with picture-painting language and satisfying surprises. Deacon Chalk is so vividly drawn you can almost reach out and stroke his goatee. Rapid fire action never stops, and Deacon's irresistible voice propels you along for the ride. When I finished this book I was out of breath!”
âAnnabel Joseph, author of
Club Mephisto
“
Blood and Bullets
certainly lives up to its name. Sort of a cross between
Kill Bill
and
From Dusk Till Dawn
, James R. Tuck's debut novel delivers a fast-paced, action-filled story that kicks off his new series with a bang. Literally. This is not your daughter's vampire book! There are no brooding, star-crossed lovers (sparkly or otherwise), no sexy vampires searching for their soul mates. Tuck gets back to basics in a world where monsters are evil and someone has to kill them. Enter the hero: a tattooed and tortured gun-slinging, vampire-slaying bad ass. If Dirty Harry and Anita Blake had a love child, he would be Deacon Chalk. I was hooked from the beginning to the end! Ladies, if Dark Urban Fantasy is not your cup of tea, then buy it for the man in your life. It's an action movie in print and the guys will love it!”
âJenna Maclaine, author of
Bound By Sin
“Tuck's Deacon Chalk is one bad-ass vampire killer with an arsenal to rival a small nation's and an unlikely posseâa priest, an Immortal and a lycanthrope.
Blood and Bullets
will keep you on the edge of your seat page after page. I loved it.”
âJeanne C. Stein, National Best Selling Author of the Anna Strong Vampire Chronicles
BLOOD AND BULLETS
J
AMES
R. T
UCK

Alone on the Oregon Trail by Vanessa Carvo
The Alterra Histories: The Fire King by C. S. Marks
One For Sorrow: The Veil Series, #5.5 by Pippa DaCosta
The Village Effect: How Face-to-Face Contact Can Make Us Healthier and Happier by Susan Pinker
Healing Hearts by Margaret Daley
Armageddon's Children by Terry Brooks
Follow the Rabbit-Proof Fence - Doris Pilkington
Eve Vaughn by The Zoo
Easy on the Eyes by Jane Porter
Rhett in Love by J. S. Cooper