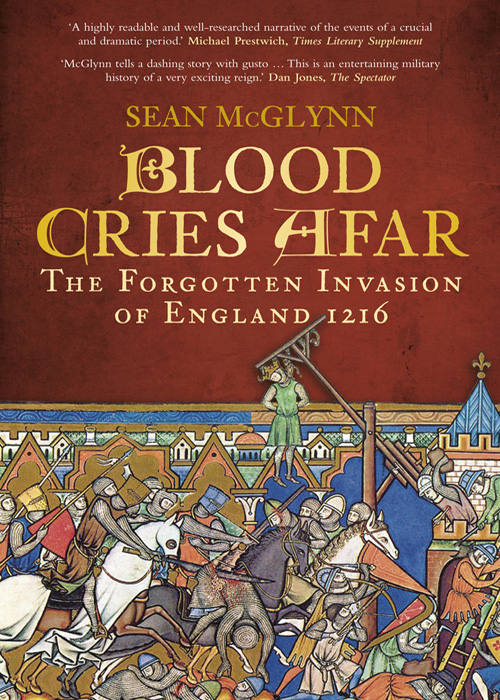 SEAN McGLYNN is the author of the acclaimed
By Sword and Fire: Cruelty and Atrocity in Medieval Warfare
(2008), which has been published in four languages. He has contributed to a number of books and authoritative reference works, including
The Oxford Encyclopedia of Medieval Warfare and Military Technology
and is a regular contributor to
BBC History, History Today
and the leading historical journals. He has studied and researched at King’s College London, London School of Economics and Cardiff University. He lectures for Plymouth University at Strode College and the Open University. Future projects include two books:
Medieval Generals
and for The History Press,
Kill Them All! Cathars, Crusaders and Carnage: The Warfare of the Albigensian Crusade
(2013).

T
his book has been a long time in the making. Whether it has been Bismarck’s events being stronger than the plans of men or P.G.Wodehouse’s Fate lurking around the corner with a piece of lead piping in its hand, circumstances have meant that I have left people waiting. I am painfully aware of this. My apologies to them all. That I did finish the book is in no small part due to a generous grant from the Society of Authors which came at a particularly crucial time; I am delighted to express my gratitude and appreciation to the Society.

In my first book I acknowledged my teachers over the years and medievalists who kindly invited me to speak at seminars and conferences. Here I should like to make mention again of Peter Coss for his understanding and learned insights and John Gillingham, whose work continues to be influential on my own. I would also like to thank Chris Harper-Bill: it was as an undergraduate in one of his lectures that I first learned of the little-known invasion of 1216 and became fascinated by it. I am very grateful to those scholars who, often a very long time ago now, have been gracious enough to provide me with unpublished papers of talks and advanced copies of articles relevant to this book. Tony Moore has been very kind in this respect. I have also benefited from Louise Wilkinson’s research, and I am thankful to David Carpenter for directing her work my way. John Gillingham and Alexander Grant have also forwarded papers and useful comments. Special mention must go to Keith Stringer, whose work on the Scottish angle has been such a great help, and to the generosity of David Crouch and Stewart Gregory for an advanced look at their work on the wonderful new edition of
The History of William Marshal
; David Crouch’s notes have proved invaluable. I have also benefited from a correspondence on national identity with the late Henry Loyn. My sincere apologies if I have unintentionally omitted others: as I say, it has been a long time. Looking ahead, I owe thanks to John France for directing me towards my next project.

In the work environment, I would like to pay tribute to past colleagues for their help and support: Joe Martin, Jo Sharrock, Dave Bates and Steve Ryan in Bristol; Lara Price in Bath; and Jackie Duff at the Open University. And the same gratitude of course extends to my current colleagues who make my place of work so enjoyable: Andy Pickering, Stephen Page, Katherine Dray and Eddie Daughton. The students have been – and are – a delight to teach. At The History Press, Shaun Barrington has been an ideal editor to work with.

On the personal front, I still owe much to some wonderful friends acknowledged in my previous book: Robert Purves (always welcome on these shores); Steven Forrow (I have forgiven you – almost – for leaving London); Dr Anthony Cross (who, when not immured in the ivory towers of Oxford University, is encouraging me onwards in Bath); and the stalwart Stephen ‘Gui’ Rigby (with whom I put the world right and laugh at the folly of it all). New mentions this time around are: James, Meinir and (my goddaughter) Olwen Ottaway; Neil Trodden, whose detective work ensured we re-established contact; Michael Owen, who keeps me in touch with developments in the modern world; and my learned friend Glenn Renshaw, with whom over the years I have shared many hours of illuminating and productive debate on matters historical, social, cultural and political.

On the family front my thanks go to Liz, Dave, Josh, Jamie and Erin, not least for doing such a great job in looking after Mum. My mother remains a constant source of support, help and friendship and I will always be grateful to her. Sam, Maddy and Jenny have shown great humour, patience and understanding during my endeavours and at my being shut away in the study; you remain inspirational and the next one is for you. Finally, my love and thanks to Marie: even greater than her considerable assistance in helping with the translations of the Old French sources has been her practical help and support that have allowed me time and space to write. Her courage and resolve in overcoming serious adversity is remarkable and demonstrates that bravery is not merely present on the battle-field. This book is dedicated to her.

‘W
ar,’ as defined by Clausewitz, ‘is an act of violence intended to compel our opponent to fulfil our will.’ This will is usually a political objective, hence Clausewitz’s more famous, but also more controversial, dictum that ‘War is nothing but the continuation of politics, with a mixture of other means.’ He amplifies this verdict in the clarification: ‘War is not merely a political act, but also a real political instrument, a continuation of political commerce, a carrying out of the same by other means.’
1
This is better known to us rendered as ‘War is the continuation of politics by other means.’ Although not all conflicts can – or should – be explained in such terms (some arising from emotional and irrational origins), this interpretation is basically sound and judicious; it is particularly apposite to the Middle Ages. Beyond the political objectives, we must also unearth the financial ones: these are rarely buried deeply but are frequently obscured by the noble ideals and moral justifications proclaimed by the warring protagonists. Politics means power means money. It is only rarely dangerous that too much cynicism is harmful to the process of historical interpretation; it is usually the case that the more cynical one is the closer one arrives at the historical truth. As I am forever telling my students, to really understand History you have to pick up the stone and see what is crawling underneath. As this book deals with warriors and not saints, it will adopt such an approach; but if these pages contain very few altruists, they do contain many brave men performing heroic acts in pursuit of their masters’ objectives, however questionable their causes or motivations.

What Clausewitz applies to the modern world is equally germane to the medieval one. Medieval warfare was about land: its political and military control, the economic exploitation of its resources, the geographical implications it possessed for both security and offence, and the power and prestige it afforded its lord. Where these matters could not be satisfactorily resolved through marriages and inheritance, the resort to war was always a ready option. However, going to war was not always undertaken with the primary goal of subjugating an opponent to the belligerent’s will: often – as before and since – its intent was to unite a people against a common enemy, to direct attention away from domestic problems and to reinforce a leader’s authority among his own subjects. To confuse issues, these objectives could be combined with, and disguised by, genuine attempts at achieving grand designs at an enemy’s expense. History is replete with examples of this, the medieval period offering no shortage of illustrations: King Henry V of England made spectacular military inroads against the French during the early fifteenth-century phase of the Hundred Years War, bringing political success both abroad and at home, thereby underpinning support for his shaky Lancastrian regime following Richard II’s usurpation.
2
In John’s reign, however, foreign wars abroad had the opposite effect, not least because they were so unsuccessful; where a leader’s aim did not coincide with those of his more powerful subjects trouble at home was inevitable. The military intentions of medieval commanders were thus the same as generals from any historical period, but it would be wrong to deem them as the only ones that mattered: the aspirations of the medieval individual also demand consideration, even if, unlike today’s electorates, they were unable to influence war-planning through the ballot-box.

The Universe Builders: Bernie and the Putty by Steve LeBel
Second Chance by Danielle Steel
By Royal Command by Charlie Higson
Amazing Mrs. Pollifax by Dorothy Gilman
Dirty Secrets by Evelyn Glass
Falconer by John Cheever
Wedgieman and the Big Bunny Trouble by Charise Mericle Harper
Tears in the Darkness by Michael Norman
Laura Lee Guhrke by Not So Innocent
Perfect Chemistry 1 by Simone Elkeles