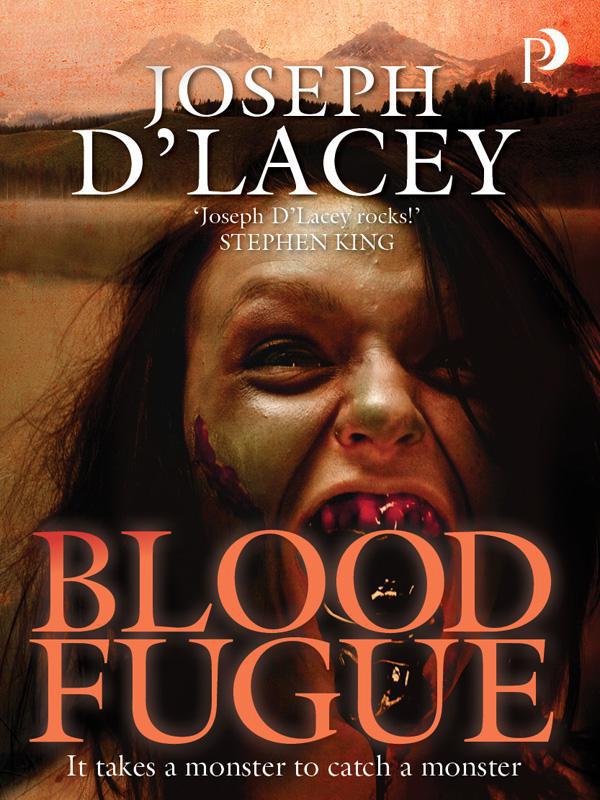 Reclusive outdoorsman, Jimmy Kerrigan, finds himself battling a vampiric plague which threatens to destroy Hobson’s Valley, the isolated mountain community he calls home. When his family, friends and neighbours fall prey to the ‘Fugue’, Kerrigan is the only one who can save them and prevent the disease spreading beyond the remote town’s boundaries.

Kerrigan is uniquely equipped to deal with the outbreak. He carries a variant strain of Fugue enabling him to overcome and heal its victims. However, the nature of the illness ensures neither he nor those he hunts down are aware they’re infected. After feeding on humans, the diseased forget their behaviour. Even Kerrigan, having confronted or neutralised a Fugue, is unable to recall his actions as guardian of Hobson’s Valley.

The illness and its effects have, like tetanus, survived in the earth around the mountain for countless generations. The lineage of Fugue Hunters has always been able to reverse an outbreak but not this time; someone wants the disease to spread and, in combination with a mutation of the virus, Kerrigan realises he may not be strong enough to contain it.

Kerrigan is challenged beyond his limits when an innocent family of outsiders hikes straight into a wilderness crawling with Fugues – a wilderness he is responsible for. Can he really save them and protect the town? Can he defeat the creature who has caused the Fugue to mutate? And, most crucially, when he learns the horrifying truth about his own infection, will he even have the strength to try?

“Folklore and mythology, as well as man’s catastrophic disregard for nature, are the meat of Joseph D’Lacey’s horror. But the prime cuts are always compassion and surprise.” — ADAM NEVILL, author of
Apartment 16
,
The Ritual
and
Last Days

“From the riveting, sexually charged opening chapter of
Blood Fugue
, the reader knows they’re in good, if a little twisted, hands. D’Lacey’s tale blasted through 265 blood-soaked pages in a fevered frenzy. Haven’t had this much fun with a dark tale since Wilson’s
The Keep
. It’s vampires pumped up on steroids and raunchy as hell, making Stoker’s Dracula blush and Meyer’s Twilight seem even more like sparkly, emo wimps.” —DON ROFF, author of
Zombies: A Record of the Year of Infection

Winner of the British Fantasy Award for Best Newcomer, JOSEPH D’LACEY is best known for his shocking eco-horror novel
MEAT
. The book has been widely translated and prompted Stephen King to say “Joseph D’Lacey rocks!”. A film adaptation is in progress. Joseph lives with his wife and daughter in Northamptonshire.

Published by Proxima Books an imprint of Salt Publishing Ltd

The right of Joseph D’Lacey to be identified as the author of this work has been asserted by him in accordance with Section 77 of the Copyright, Designs and Patents Act 1988.

This book is in copyright. Subject to statutory exception and to provisions of relevant collective licensing agreements, no reproduction of any part may take place without the written permission of Salt Publishing.

This book is sold subject to the conditions that it shall not, by way of trade or otherwise, be lent, re-sold, hired out, or otherwise circulated without the publisher’s prior consent in any form of binding or cover other than that in which it is published and without a similar condition including this condition being imposed on the subsequent purchaser.

For my dad, Richard, who showed me the magic of books.

‘Real freedom lies in wildness, not in civilization.’

The sun slips behind the crest of Bear Mountain at about two thirty in the afternoon during the winter and just before five in the summer. For an hour or more after, the valley lives in a purple twilight that casts its silence out with the mountain’s lengthening shadow. Something about the haze that lingers over the pine trees makes the landscape look as though you’re viewing it through a violet filter. The temperature drops the moment Bear Mountain becomes a silhouette.

It doesn’t matter where in the valley you are at this time, you always notice the change; everyone does, locals and strangers alike, no matter how long they’ve lived here. You pause at that moment each day to mourn the sun’s passing and steel yourself against the premature birth of night.

The creature watched. It sensed.

No light came from the vehicle, except for the spark and flash of a match that gave rise to a single red glow before dying. In the darkness the red ember periodically burned brighter as it moved from one position to another inside the car. Within a couple of minutes, a flick sent the smouldering end through a rolled down window to the moist ground where it sizzled and died.

Instead of light, there was sound. What began as whispers and stifled giggles became chatter and laughing — occasionally, high-pitched screeches of delight followed by more laughter. Soon, the rear door opened and a girl spilled forth. A young man staggered after her, slamming the door shut behind him.

‘Wooo. I am buzzing. Buzz, wuzz, wuzz.’ The girl’s voice was lilting, the words over-emphasised.

‘That buzz came all the way from Acapulco.’

The young man stumbled in the scant glimmer of starlight from above.

‘David, you are not gonna pee with me. You might get it on me.’

She dissolved into sniggers and had to stop while she recovered. David caught up to her.

‘You can’t see a fucking thing out here.’

She walked away from him, whispering back as she went:

David reached out and found her trailing palm. It was warm and smooth in the cool of the night. They were already twenty yards from the car but she squeezed his fingers and drew him on.

She led him into the trees where they had to duck beneath the lowest branches. A willowy pine branch caught on her sleeve but she pressed past it, determined. The branch bent, but did not snap and as she left it behind, she released it. It whipped back towards David. He heard the swish and felt the sting at the same time.

He stopped and held his hand to his cheek. The skin had parted and raised like a second pair of tiny lips. He felt the warm wetness of his blood, slick and sticky on his fingers. The pain made his eyes water and the saline dripped into the wound making it burn.

‘The branch fucking cut me. It cut my face.’

‘You said yourself, you can’t see a fucking thing out here. I’m going back to the car.’

‘Wait. Just let me make sure you’re all right.’

She was next to him now, pressing close. It was enough to make him want to stay a little longer. She put her hands to his face —

— and touched the ridged welt there. Touched the fluids that had so recently been inside David’s body. She kissed the damage. When she withdrew, she licked her lips silently in the darkness. She tasted him. She swallowed her saliva, tinged with David’s tears and blood, ingesting him.

‘Don’t go back yet,’ she whispered.

Lifting up the hem of her short skirt, she hooked her thumbs into the elastic waistband of the thong she wore and pulled it down, stepping free and placing it in her denim jacket pocket. She hiked her skirt up and as she squatted, she pulled David down with her to the ground. There beneath the trees, the earth was covered with pine needles that were tinder dry. With David kneeling beside her, she began to urinate. He listened until she had finished.

‘That was beautiful, Gina. Amazing.’

He turned over and lay on his back expecting her to squat over him but she didn’t.

Looking up, David could not even see the stars through the canopy of trees. The darkness was intimate, pressing against his face like a mask. He smelled pine and dirt and Gina’s sweet piss.

His blindness lent power to every sensation. He felt her unbuckle his belt and unbutton his fly. She yanked down his jeans and boxers well past his knees. In the dark, free air, his skin was alive to every sigh of wind, every scratch of the pine needles against his behind. He knew he wouldn’t be able to hold himself back for long. As soon as Gina touched him he would shudder his pale sperm into the night.

He felt heat then, the moist heat of her breath against his thigh. Her lips not just warm, but hot. The contrast with the chill in the air was exquisite. Her cheek brushed his penis and then the heat was there, right there around him.

And from then on she used only her tongue. With no more pressure than a feather lain against his taut flesh, she caressed his beating totem.

Gina, her skirt still pulled up over her hips, swung her ass from side to side in the darkness and ground her hips against the nothingness of night. With her hands on either side of David’s hips she bobbed her head up and down, licking and circling and flicking; the contact so light it could last forever.

He didn’t feel it when her tongue divided into three writhing, snake-thin, shafts. The central one continued to work away at him, twitching and sliding over, under and around, keeping him on the very edge of explosion. The other two shafts of tongue-flesh stretched away towards the joint of his groin where they began to gather and push at his skin. They released a fluid through tiny orifices in each tip, numbing David’s skin in the places where they touched it. They pressed into him in muscular spasms; they elongated and sharpened and wormed against him and the skin beneath. It weakened and thinned and stretched at their insistence, finally splitting.