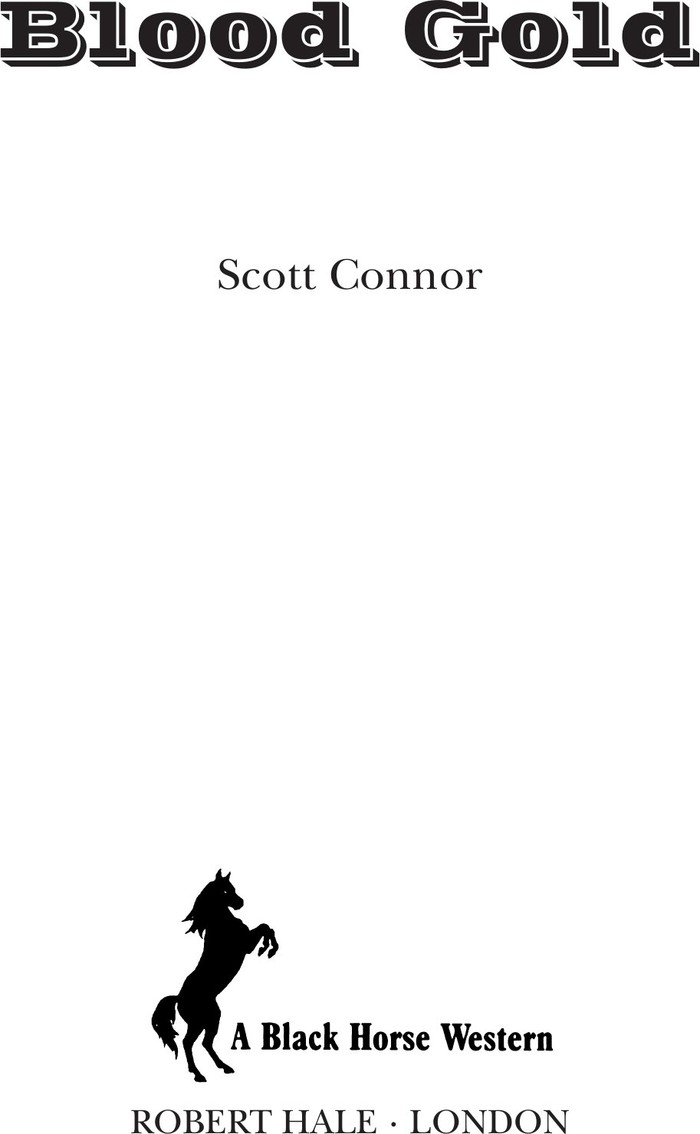 For long moments Patrick Grady glared at Jack, then slowly lowered his head.

Ten feet before him on the rocky outcrop above Hangman’s Gulch lay two guns. Twenty feet away stood his partner, Rusty Anderton.

‘I ain’t doing that,’ he muttered.

Jack sauntered three slow paces to stand over the guns. A gust of wind blowing down the gulch whipped his coat as he glanced around the circle of bandits surrounding Patrick and Rusty. His single eye darted back and forth, the ruined wasteland of his other orbit red and angry.

Encouraging nods and eager grins rippled round the circle.

Jack snorted and kicked the other gun. It slid to a
halt two feet in front of Rusty.

From the corner of his eye Patrick glanced at Rusty, who clutched his arms to his chest and stopped running his tongue through his moustache so that a timid smile could emerge.

‘Like Patrick said,’ Rusty murmured, his voice shaking, ‘I ain’t taking my gun either.’

‘One way or another,’ Jack muttered, pointing a firm finger at each man in turn, ‘you two will
entertain
me. This way, one of you lives. The other way, you’ll both be praying to die by sundown.’

The circle of bandits chuckled, the sound low and humourless.

‘I’d sooner die the man I am,’ Patrick spat, ‘than kill my partner.’

Patrick glanced at Rusty, searching for more
defiance
, but Rusty had slammed a shaking hand over his eyes.

Inside the saddlebags were dozens of smaller bags, which, after nine months of successful prospecting, bulged with gold dust. But Patrick’s and Rusty’s streak of luck had ended when they’d taken what they thought was the safer route to Black Rock through Hangman’s Gulch.

There, the bandit Jack Wolf had ambushed them.

After a short chase and skirmish, Jack had captured them and their gold. After some shoving and taunting, Jack had decided to have some fun. He’d returned Patrick’s and Rusty’s guns to them,
each loaded with a single bullet, and ordered them to face each other in a fast draw showdown. And, as a torturous enticement, he’d promised them that the one who killed the other would go free, albeit substantially poorer than before.

Jack kicked a bag on its side, then glanced around his circle of men.

A cry started, low at first then growing with each repeated shout.

Jack laughed. ‘Sounds like it’s time to ask the cards.’

Using two outstretched fingers, Jack extracted a battered pack of cards from his top jacket pocket and held them aloft.

‘You draw a card. And that card decides your fate.’ Jack patted the pack of cards, then tapped his chin. ‘A non-face card says you fight the showdown. A
two-eyed
face card says you don’t have to fight.’ Jack glanced around, smirking. ‘A one-eyed card says you keep your gold dust.’

‘Quiet. We live by the cards.’

‘And I ain’t siding with that either,’ Patrick said as Brady lowered his head. ‘Those ain’t good odds.’

Jack ripped his gun from its holster and lifted it high, sighting Patrick’s kneecap with his one good eye.

‘If you don’t take them, you can just die.’ Jack licked his lips. ‘And I’ve just thought of a way that’ll take till long after sundown.’

Patrick gulped, but then jutted his chin and stood tall.

‘As I said, I’ll die the man I am rather than die entertaining scum.’

‘Just do it.’ Rusty glanced down at the gun at his feet, then held his hands wide and flashed a
half-smile
. ‘You might get lucky.’

Patrick hung his head a moment, then took a deep breath. With a last glance at Rusty, and an
encouraging
nod from his partner, he strode up to Jack and extended an arm, then drew it back.

‘So if I draw the king of diamonds, the jack of spades, or the jack of hearts, we keep our gold?’

Jack nodded and fanned the cards out, his one eye gleaming in the light from the high sun.

With his hand shaking with the slightest of tremors, Patrick half pulled a card from the pack.

He lifted a corner and snorted. While staring at Jack, he ripped the card from the pack and twisted it over.

Jack chuckled. ‘So you get to fight that showdown, after all.’

Patrick flicked the three of spades on the ground and slammed his hands on his hips.

‘What did that prove?’

‘It put your fate into the cards. And the cards said that one of you lives and one of you dies.’ Jack grabbed the card from the ground and slipped the pack into his pocket. ‘The gun can decide which one.’

Patrick turned his back on Jack and edged towards his gun, shaking his head. He rolled his shoulders, then toed the gun to the side towards Rusty’s gun. Still shaking his head, he shuffled to it and toed it another foot.

As a murmured grumbling started from Jack’s men, Patrick bent and extended a hand to grab the gun, but he stopped with his fingers just brushing the metal.

Rusty gulped and knelt beside his gun.

Jack and his men chuckled at Patrick’s and Rusty’s submission. Bets changed hands, most backing Patrick to win the showdown.

But as Rusty grabbed his gun, Patrick fumbled with his gun and as he rooted on the ground for it, he leaned towards Rusty.

‘That Jack Wolf ain’t living long enough to enjoy our gold,’ he whispered to Rusty. ‘I’ll take him. You take whoever you like.’

Rusty winced. ‘And then what? We’ve only got one bullet apiece.’

‘We take our chances.’ Patrick looked around the solid circle of grinning bandits. He counted fifteen. ‘But whatever you do, do it fast and keep moving.’

‘That’ll just get us killed.’

‘Everything we do will just get—’

‘Be quiet, you two!’ Jack roared. He folded his arms and grinned. ‘It’s time for the showdown.’

Patrick darted a last harsh glare at Rusty, then stood and holstered his gun. He paced back to leave five clear yards between himself and Rusty, then hunched down, hoping that he was adopting a gunslinger crouch.

Facing him, Rusty matched his actions, but his hands were shaking even more than before and his gaze darted around the circle of grinning men. Patrick stared at Rusty until he looked at him. While moving his lips as little as he dared, he mouthed a countdown.

Rusty frowned so deeply his face seemed to cave in.

Patrick rolled his shoulders and blew on his fingers.

Rusty gulped and rubbed his sweating palms on his jacket.

Rusty jabbed his shaking fingers through his thick red beard.

Patrick glanced to the side, noting Jack’s exact position ten yards to his left.

Rusty closed his eyes a moment, his mouth moving feverishly as he mouthed a benediction.

Rusty stared deep into Patrick’s eyes. His head waggled in the shortest of shakes.

Patrick whirled his hand to his holster and turned on the hip towards Jack. But then hot fire punched into his guts, knocking him back and around, his pained finger-twitch gouging his only bullet into the earth scant inches before Jack’s feet.

He staggered a pace, then dropped to his knees, clutching his guts, and toppled on to his side. Through pain-racked eyes, he looked up.

In his outstretched hand, Rusty had aimed his shaking gun straight at Patrick. A flurry of smoke rose from the gun barrel.

Rusty shook his head, his eyes wide and
beseeching
.

Patrick opened his mouth to scream a denial, but darkness claimed him.

The fire in his guts burned, enveloping his mind.

He tried to shout for help, but he couldn’t force words from the blasted desert that was his mouth.

But that wasn’t the worst of it.

Whenever he almost dragged himself back to
reality
, he thought that someone had bound him and hung him upside down. And worse, he steadily swayed back and forth.

Through intense willpower, he forced himself awake to find he was lying over a horse, the ground just feet below him. But the apparent swaying of the ground forced a vomiting attack from his tortured body.

The muscle spasms ripped his insides and this time, he welcomed the darkness that came and stayed.

‘How are you feeling?’

The question came from a woman.

Patrick tried to croak an answer, but no words emerged. With a gritty gulp, he cleared his throat and forced his eyes to open.

A plain face peered down at him, but the eyes were kind and young.

Patrick instructed his head to turn, but his vision remained fixed on the face. With just his eyes, he glanced around.

He was in a room, ornately furnished, but decayed and reeking of incense. He glanced down. He lay on a bed, dressed in just his underclothes, a single
blanket
folded back across his midriff. Bandages encased his chest. They were clean with no blood showing.

‘Hannah, Hannah Foster. And how are you
feeling
?’

Patrick forced his hand to lift from his side and tentatively poked his bandages.

‘Just tell me the truth.’ Patrick raised his eyebrows. ‘You are a nurse, aren’t you?’

‘No. I’m a …’ Hannah’s eyes appeared to glaze a moment. She shook her head with the barest of movements. ‘I’m not a nurse.’

Hannah flinched, but instead of attempting to remove his hand, she laid her other hand on his brow.

‘I reckon so. If anyone can help you, Gideon Law can.’

‘Glad you think so,’ a man said from Patrick’s side.

Patrick released Hannah’s arm and forced his head to turn.

A man, far younger than Patrick expected, smiled at him from the doorway – Gideon Law.

‘Someone shot you. That’s what happened. But I removed the bullet without too much trouble.’ Gideon smiled. ‘And to answer the question you were asking Hannah – you’ll live. The bullet cracked a rib, but it didn’t cause as much damage as it might have. If you rest for a week or two, you’ll mend. In a month, you’ll be back to your old self.’

‘I can’t rest.’ Patrick looked to the ceiling and breathed deeply through his nostrils, forcing down the burst of anger that threatened to cloud his vision. ‘I have to … to find someone.’

Gideon sauntered to Patrick’s bedside and busied himself with prodding at Patrick’s dressing.

‘Good work, Hannah. You have a real skill here.’ He flashed Hannah a smile, then glanced down at Patrick. ‘You can do all the
finding
you need to do once you’ve healed. For now, you aren’t going anywhere.’

Patrick thrust an arm down to his side and tried to lever himself up, but as he only shifted an inch, he flopped into the cushions and decided to accept advice.

‘And where is here?’ he asked, now enveloped in the cushioned bed.

‘This is Destitution.’ Gideon glanced around the room. ‘And you’re in the Belle Starr.’

Gideon winced. ‘No. A whorehouse.’

‘Thanks for reminding me,’ Hannah said. She forced a thin smile and turned to the door. ‘I have to go.’

Witch's Canyon by Jeff Mariotte
Age of Shiva (The Pantheon Series) by Lovegrove, James
Hild: A Novel by Griffith, Nicola
RockMySenses by Lisa Carlisle
Only One Life by Sara Blaedel
The Dead and Buried by Kim Harrington
Return to Marker Ranch by Claire McEwen
The Returning by Christine Hinwood
Heir to Greyladies by Anna Jacobs
Queen of Ambition by Fiona Buckley