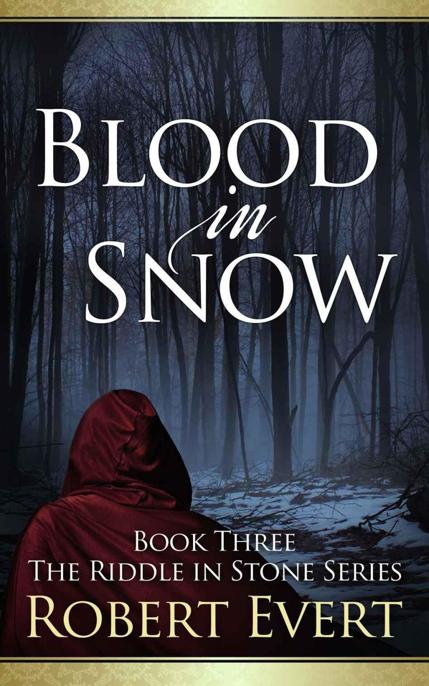 BLOOD IN SNOW (THE RIDDLE IN STONE SERIES - BOOK THREE)

Book Three of the
Riddle in Stone
series

Copyright © 2014 by Robert Cimera
All rights reserved, including the right to reproduce this book or portions thereof in any form whatsoever.

Sitting on his throne, King Lionel wiggled his well-manicured fingers through a shaft of red light streaming through the stained glass windows. He poked the air as if trying to touch the edge between light and shadow, while some lesser nobility stood before him, prattling on about a land dispute with some other lesser nobility.

“I beg your pardon, Your Highness?”

“I don’t care,” the King repeated, louder. “Why don’t you and this Lord Something-or-Other fight to the death and decide the matter that way?”

The lord blanched. “Sire, it’s … it’s only a grazing meadow.”

The King tossed his hands up. “If it is not worth dying for, then why are you bothering me with this? Go kill him or stop whining. Honestly! Now leave me be.”

The lord hesitated, and then bowed. “Yes, sire. Very wise. Thank you.”

“Your Majesty,” an advisor said from one of the long ornate tables lining the hall, “your next appointment is in twenty minutes. Lord Barnum would like to speak with you about his son.”

King Lionel groaned. “Which one? Barnum has more bastards than … than … than something that has a lot of bastards!”

“Yes, sire. He should be here momentarily.”

The King resumed poking the red light streaming across his lap as the advisor returned to his stack of papers.

Lester watched him, shook his head, and muttered, “Idiot.”

He scanned the room.

At the tables along the walls, the King’s advisors were all pretending to be busy.

Lester inhaled deeply, smelling whatever the cleaning wenches used to polish the marble floor. He took off his weatherworn cloak and tossed it into the corner.

The dwarf began to run and, leaping into the air, flipped end over end down the length of the grand hall, twisting and turning. Hitting the ground, he tumbled to the raised dais upon which the King sat and bounded to his feet, hands splayed apart.

The King gave his jester a weak smile and went back to studying the ray of colored light.

“Are you okay, Your Highness?” the dwarf asked.

“You aren’t in uniform,” the King said. “Where is your hat and your funny shoes with the bells on them?”

“I’m wearing them.” Lester gestured to his travel clothes with a theatric sweep of his hand, eyes glinting.

The King glanced up and shrugged. “Oh, yes. I see.”

Climbing the steps to the throne with exaggerated lunges and dips and swirls, the glimmer in the jester’s eyes brightened.

“Want to see me hurt myself?” Lester leapt into the air, flipped, and fell to the floor, landing hard on his back at the King’s feet. He spread his hands out again.

The King took no notice.

After pretending to hoist himself up with an invisible rope, Lester leaned against an imaginary table. “Want me to set fire to the pants of one of your advisors?” he whispered conspiratorially.

“Master Jeremy certainly deserves it,” the dwarf went on. “Why, I bet he’d run around like a flaming chicken!” Lester ran frantically around the throne, squawking and clucking like his tail feathers were on fire. Several of the advisors looked up briefly, then went back to their tasks.

Lester stopped and, sneaking a glance at the inattentive advisors, began to sway and shuffle his feet, brown eyes turning a cold blue.

“I must say, you’re handling this entire Highlands situation with remarkable calm. I’m surprised you haven’t sent an army up north to deal with the traitors.”

“Yes,” Lester said. “The people of Rood have revolted, sire. They have declared themselves their own kingdom.”

“What!” King Lionel shouted. The advisors started to stir. “When did this happen? Why wasn’t I informed?”

“I’m sure you were informed by the Royal Messenger who just left here.” Lester swayed and dipped and spun in a circle, eyes still twinkling. “They’re thumbing their noses at you, sire. It’ll never do.”

“This’ll never do!” The King slammed his fist onto the richly carved wood of his throne’s armrest. “Traitors! Traitors!”

Thinking the King was talking about them, the advisors shuffled their papers faster.

“Yes,” Lester said. “Why, I’m sure you’ll want to send knights up there right now and—”

“I’ll crush them like bugs!” The King leapt to his feet. “The vermin! Try to revolt will they? I’ll kill them all!”

This seized all of the advisors’ attentions. The Senior Advisor, Master Griffin, rose and approached the dais.

“No, no,” Lester said quickly, trying to finish before the Senior Advisor came within earshot. “Capture the instigator; capture him and bring him back here in chains! That’s what you want to do. His name is Edmund! He has one eye, and stutters.”

King Lionel thrust his fist in the air. “I’ll bring him back in chains!”

“Yes, bring him back here. Don’t kill him. His name is Edmund.”

“I’ll bring this Edmund The One-Eyed back here in chains! Then I’ll kill him!”

“What?” The dwarf watched Master Griffin climb the steps. “No. No, you don’t want to kill him. You want to—”

“I’ll burn his other eye out! I’ll cut off his hands! I’ll feed him to my dogs! Curse the miserable traitor! I’ll make this Edmund suffer like he’s never suffered before!”

“Your Highness.” Master Griffin bowed before the throne. Lester’s eyes suddenly dulled to brown. “Is everything all right, Your Majesty?”

“All right!” the King thundered. “All right! Why, the people of the Highlands have revolted! And you ask if everything’s all right?”

Master Griffin considered the dwarf standing next to the King and sighed. “I’m sure it was just a bad dream, Your Eminence. Nobody is revolting.” Then he added, “Except for your Court Jester.”

Lester stepped behind the throne and made an obscene gesture.

“All is well, Your Majesty.” Master Griffin took no notice of the dwarf. “Perhaps after today’s business is conducted, you should go on a hunt or a—”

“How could you dare to say such a thing?” The King’s face turned as red as the light streaming through the arched windows. “Didn’t you hear? They’re revolting! The miserable traitors! I just received a message from a, a …”

“A Royal Messenger!” King Lionel shouted. “The Highlands are in flames! There are killings, and rapes, and murders—and I’m not involved!”

He snapped his fingers at one of the boys sitting on the floor by the far doors. The boy raced to the dais.

“Ready my horse!” he hollered. “Summon my knights! All of them. We ride to battle!”

The boy sprinted out of the hall as both Lester and Master Griffin attempted to calm the King.

“I’m sure you don’t really …” Griffin began, as the other advisors murmured in astonishment. “That is to say, sire, I didn’t see any messenger, royal or otherwise, enter this chamber. I think you are—”

“Nonsense! Lester was standing right here when he came in!”

Everybody looked at Lester as he stammered, “Yes … yes. That’s … that’s true, Your Majesty. Tall fellow, with two eyes and a mouth. Breathed in and out, in and out. It’s hard to forget him. But I think it would be best if you stayed. You were just saying to me that you were going to—”

“Nonsense!” the King cried. “Battle is at hand! And I have a traitor to torture and kill. Now get out of my way, I have a war to win! A war, I tell you!” Tossing his red-and-gold robe dramatically to one side, the King of Eryn Mas stomped out of the hall as everybody else dropped to their knees.

“Well, that didn’t go as expected,” the jester muttered to himself.

“What did you do?” Master Griffin demanded.

Lester shoved a finger at the Senior Advisor’s nose. “Bugger off and mind yourself, or you’ll end up someplace nasty.”

Lester marched to the open doors and, mocking the King, tossed an imaginary robe to one side. “Now get out of my way, I have a war to win! A war, I tell you!”

He stomped off to report what had happened.

Edmund sat among the ruins of the great tower that once stood watch over Rood centuries earlier. It was a pile of moss-covered rubble now, and he halfheartedly considered how he might use the huge stone blocks to rebuild the village. But he knew that wasn’t the reason he’d climbed up the hill.

As a child, he’d come to the ruins to think, or to get away from the constant teasing of his classmates, or to daydream about becoming a world-famous adventurer. Now he just wanted to hide from the endless parade of people who wanted his input on everything under the sun, from the critical to the trivial—which was good, in a way. Rood was starting to take shape: The burned-out buildings had been torn down, foundations cleared of reeking debris; the third barracks and smithy were being built; furs for winter were being made into clothing. Everything was moving at an incredible rate. But as much as the people depended upon him, as much as they all swarmed around him from morning until night, asking him question after question, he felt alone, utterly alone. This feeling only intensified when he watched Pond, Abby, and as many guards as could be spared ride south that morning to buy supplies. They’d be gone for a month at least, and Edmund didn’t want to think about Pond and Abby being together for that long. It was petty, he knew, but he couldn’t help but worry they’d come back married, ending his chances at winning Abby’s heart.

Murder on the Champ de Mars by Cara Black
A Most Extraordinary Pursuit by Juliana Gray
Mating Rituals of the North American WASP by Lauren Lipton
Mississippi River Blues by Tony Abbott
Mistletoe Between Friends by Samantha Chase
Ira Levin by (htm), Son Of Rosemary (v0.9)
Resist by Elana Johnson
Suffer the Little Children by Donna Leon
The Mystery of the Alligator Swamp by Gertrude Chandler Warner
The Orphans of Race Point: A Novel by Patry Francis