Read Blood of the Mantis Online

Blood of the Mantis 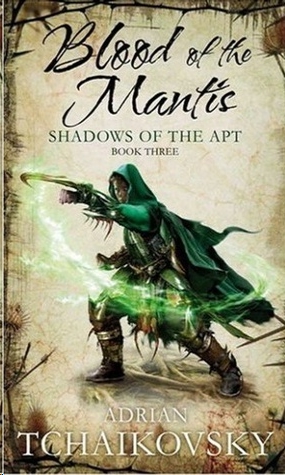 Praise for Shadows of the Apt

‘Occasionally a fantasy author comes up with a way to break the mould of traditional genre tropes: M. John Harrison’s
Viriconium
and China Mieville’s
Perdido Street Station
are two examples that immediately spring to mind. Tchaikovsky, on this evidence, looks like a new addition to that select hall of fame . . . This looks like a series with legs: six of them’

‘The insectile-humans premise is inventive, shaping the world in all sorts of ways’

‘Empire’s
most singular distinction in the genre is its employment of a totally different selection of fantastical insect/human hybrids . . . This allows the author to achieve the unusual feat of creating a new universe populated by unique characters’

Adrian Tchaikovsky was born in Woodhall Spa, Lincolnshire, before heading off to Reading to study psychology and zoology. For reasons unclear even to himself he subsequently ended up in law and has worked as a legal executive in both Reading and Leeds, where he now lives. Married, he is a keen live role-player and occasional amateur actor, has trained in stage-fighting, and keeps no exotic or dangerous pets of any kind, possibly excepting his son.

Catch up with Adrian at www.shadowsoftheapt.com for further information about both himself and the insect-kinden, together with bonus material including short stories and artwork.

Blood of the Mantis
is the third novel in the Shadows of the Apt series. Have you read
Empire in Black and Gold
and
Dragonfly Falling?

Empire in Black and Gold

The right of Adrian Czajkowski to be identified as the author of this work has been asserted by him in accordance with the Copyright, Designs and Patents Act 1988.

You may not copy, store, distribute, transmit, reproduce or otherwise make available this publication (or any part of it) in any form, or by any means (electronic, digital, optical, mechanical, photocopying, recording or otherwise), without the prior written permission of the publisher. Any person who does any unauthorized act in relation to this publication may be liable to criminal prosecution and civil claims for damages.

Visit
www.panmacmillan.com
to read more about all our books and to buy them. You will also find features, author interviews and news of any author events, and you can sign up for e-newsletters so that you’re always first to hear about our new releases.

Once again thanks to my agent Simon, to Peter Lavery, and to Julie, Chloe and everyone at Macmillan for making this book a reality.

Also, as an author living in the north of the country has a necessarily nomadic existence, thanks to Andy and Tash, Wayne and Krissy, Helen and Joff, Ledge, Gareth and Frances for at various times providing an itinerant author with a meal and a place to rest.

Malkan
– Wasp-kinden, general of the Seventh Army (the ‘Winged Furies’)

The Darakyon
– forest, formerly a Mantis hold, now haunted and avoided by all

Assembly
– the elected ruling body of Collegium, meeting in the Amphiophos

Great College
– in Collegium, the cultural heart of the Lowlands

Shadow Box
– a mysterious artefact stolen from Collegium by Scyla

The Wasp Empire has commenced its great war against the Lowlands, capturing the cities of Tark and Helleron and defeating the Ant-kinden of Sarn in a pitched field battle. Now General Malkan’s Seventh Army, the Winged Furies, waits for reinforcements before pressing on to Sarn itself. Malkan’s victory over the Sarnesh was accomplished by a new weapon, the snap bow, devised by the former Lowlander Totho, now an apprentice of the Empire’s foremost artificer.

The Highwayman (Rakes and Rogues of the Restoration Book 3) by James, Judith
One Day in Oradour by Helen Watts
Clarke, Arthur C - Fall of Night 02 by Beyond the Fall of Night
Artemis by Andy Weir
Strong Darkness by Jon Land
A Vintage To Die For (Violet Vineyard Murder Mysteries Book 2) by Harvey, JM
Christening by Claire Kent
Eternal (Eternal series) by Nay, Chantelle
The Pact by Monica McKayhan
Crave by Ayden K. Morgen