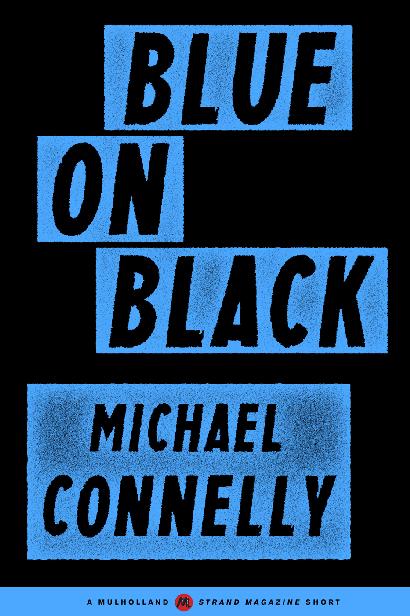 Two women have gone missing, and LAPD Detective Harry Bosch has a strong suspicion that an avid fisherman named Denninger is the culprit. Bosch needs something stronger than a suspicion to bring Denninger in, but all he has are a handful of photos--prior mug shots and pictures of Denninger posing with his prize fish. It's not much to go on, and Bosch is running out of time, which is why he calls in FBI agent Rachel Walling. What she sees in these photos could blow his case wide open.

"Blue on Black" by Michael Connelly is one of 20 short stories within Mulholland Books's Strand Originals series, featuring thrilling stories by the biggest names in mystery from the
Strand Magazine
archives. View the full series list at mulhollandbooks.com and listen to them all!

Hachette Book Group supports the right to free expression and the value of copyright. The purpose of copyright is to encourage writers and artists to produce the creative works that enrich our culture.

The scanning, uploading, and distribution of this book without permission is a theft of the author’s intellectual property. If you would like permission to use material from the book (other than for review purposes), please contact [email protected] Thank you for your support of the author’s rights.

Bosch had left her alone in the room for almost an hour. It was time. He knocked once on the door and entered. Rachel Walling looked up from the table. She had the photos spread out across it so she could view them all at once.

He moved into the room and sat down across from her.

“There isn’t much else here,” she said.

She waved her hand dismissively at the record of his work on the case. He nodded. She was right. He didn’t have jack.

“You see anything? You said you could only give me an hour. I don’t want to—”

“But you knew I would start to look at the photos and I’d get caught up in it. That’s why you called me, Harry.”

“No, I called you because I’m desperate. I know this is the guy. I can put him in close proximity to both women. He was following them. He’s got the history and profile—the guy’s an apex predator. But after that, I’ve got nothing. So what have you got, Rachel? Can you help me or not?”

She dropped her eyes from Bosch’s without answering. She returned her focus to the photos. Denninger’s prior mug shots and prison ID shots from the rape conviction. Denninger posing with a number of prize fish he’d caught in Santa Monica Bay. Denninger on his boat. On the Avalon Pier on Catalina. Photos of his home, inside and out.

“He likes to fish,” she finally said.

“Yeah. That and poker. He told us those are his hobbies.”

“Does he own this boat?”

“Uh-huh. He keeps it down in Marina del Rey on a trailer lot. We were thinking he probably used the boat to dump the bodies. Because we sure haven’t found anything in his house or pickup. Nothing on land.”

“And you searched the boat.”

“Yeah, we searched it. And got nothing. We took it to the police garage and put it in the blackout room. Lumed the whole thing and it glowed like Christmas. Blood everywhere, but it was all fish blood. Not a drop of human blood, not even his own.”

She nodded and picked up the photo taken off the ATM video that showed the first missing woman, Olivia Martz, making a withdrawal. It was taken through a fisheye lens, designed to capture the entire environment around the ATM. Denninger was behind her and to the right, probably never thinking he would be on the film.

“So,” Walling said. “You have his prior record as a sexual predator and then the two videos. The parking garage video puts him in the Grove at the same time Allison Beaumont was there on the day she disappeared, and likewise you have the ATM video of Olivia Martz making a withdrawal that puts him right behind her at the Third Street Promenade. Together this got you probable cause for search warrants, and the searches turned up nothing.”

“That’s about the size of it.”

“Are you watching Denninger?”

“We have a loose tail on him for now. But that won’t last forever. There’s no overtime left in the budget. That’s why I called you.”

“You should have called Behavioral. You’d get the whole package from them.”

“Yeah, in about six months. How many more girls might go missing by then? Look, Rachel, I know this isn’t your beat anymore, but you’re good at it and you’re fast. That’s why I called you. Now is there anything in all of that that can help me? Your lunch hour’s over.”

She glanced at her watch to confirm the time and picked up one of the photos. It was the one of Denninger on his boat, holding up a fish with both hands. The seas were choppy in the background and the spine of an island rose in the distance. Catalina, probably.

“When I was in Behavioral, a significant number of the predators we encountered had hobbies like hunting or fishing. The percentage was higher than the percentage in the general population. It wasn’t anything we could really quantify, but it was there. It has to do with the personality—the tracking and baiting. And, of course, the killing. I noticed that of the two, the fishermen committed crimes that took more thinking, had more finesse. The hunters committed crimes of stalking and disorganized abduction. The fishermen were smarter, were more organized.”

“Great, so what are you saying, this guy is too smart for us?”

“No, I’m just saying Denninger’s smart. He prepared for the time that he would become the focus of law enforcement. He was ready.”

“Smart enough not to leave any evidence, to drop the bodies over the side and sink ’em so we’d never find ’em.”

“Look at all these photos of the fish he’s caught.”

She moved the photos around on the table, turning them so they would face Bosch.

“Yeah, we got them from him. He had them on a bulletin board in his kitchen. He was proud of them. He said we could have them.”

“He said he had plenty more.”

“In every picture he is holding up the fish or at least touching it in some way.”

Bosch leaned forward over the table. She was right. He hadn’t noticed this—wasn’t sure what it meant.

“That’s what we were hoping, that he had kept something from the girls and we’d make the link that way. Driver’s license, lock of hair…anything. But like I told you, we got nothing. His place is clean. His pickup is clean. His boat is clean. The garage where he works is clean. He’s Mr. Clean.”

“Sometimes the trophy isn’t a lock of hair. It’s the real thing.”

“You’re saying he kept the bodies? Impossible. We would have found them. We’ve put six hundred hours into this case so far. No bodies. He dumped them in the Pacific and we’ll never find them again.”

“I worked more than one case where the bodies were buried and the killer would return to visit. I had another where the bodies were found and buried by their families. Each night of the week the killer would go to a different cemetery to visit his victims. That’s where we caught him. It’s a strong attraction to be with his conquests, his trophies. Maybe it’s the same with water. Maybe he weighted them and they are exactly where he put them in. He visits them on the water.”

“Yeah, but how would he mark the locations? He’d have to—”

Bosch stopped as he realized the answer to his own question. Walling handed him the photo of Denninger smiling at the camera and holding up the fish with two hands.

“The console,” she said.

Bosch studied the photograph. The photo had been taken from the stern by an unknown photographer. The boat was a twenty-eight-foot open fisher, with a center console and a T-top that offered partial shade from the sun. Denninger was standing by the starboard gunwale, holding up his shining trophy fish. Next to him was the console. Scattered across the top in the shelter behind the windshield was a variety of fishing equipment. Bosch saw pliers, thick rubber gloves, a knife, and a plastic tray filled with lures and leaders and hooks. There was also a small electronic device with an LED screen that Bosch had previously dismissed as Denninger’s cell phone.

But now, as he looked at the photograph, Bosch saw that Denninger had his phone clipped to his belt. The device on the console was something else.

“And the locations of bodies if you planned to come back to visit.”

Walling nodded. Adrenaline started to pour into Bosch’s bloodstream. Walling had led him right to a solid break.

“There was no GPS in the possessions we searched,” he said.

“He hid it somewhere,” she said. “He doesn’t need trophies. He just needs his spots. So he can visit the girls.”

Bosch stood up and started pacing in the small room.

“Where could it be?” he said, more to himself than Walling.

“Who took these photos?”

“Well, he’s got at least one fishing partner. I’d start there.”

“Rachel, this is a big help. Thank you.”

“The FBI is always glad to help.”

Bosch pulled his phone and made a call. Jackson picked up immediately.

“He’s home. He’s gotta know that we’re watching him. Did your agent pal come up with anything?”

“Yeah, we’re looking for a handheld GPS device. It’s in one of the pictures. He marked his fishing spots and he might have marked the spots where he put the girls. I didn’t see it on any of the search inventories and I know it wasn’t on the boat. You or Tim have any ideas?”