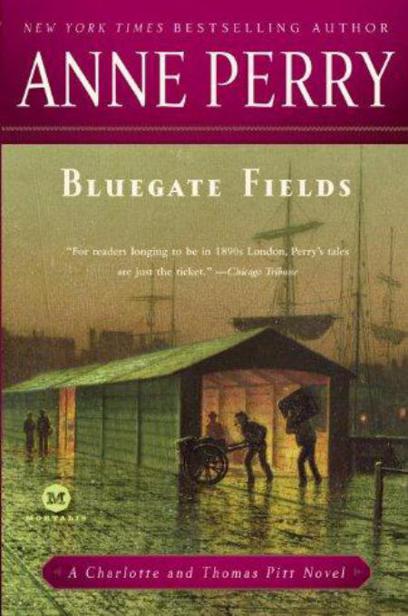 ...dedicated to the members of the John Howard Society, who practice their founder’s belief in the right to dignity of all people.

I
NSPECTOR
P
ITT SHIVERED
a little and stared unhappily while Sergeant Froggatt lifted the manhole cover and exposed the opening beneath. Iron rungs led downward into a hollow chasm of stone that echoed the distant slither and drip of water. Did Pitt imagine the scutter of clawed feet?

A breath of damp air drifted up, and immediately he tasted the sourness below. He sensed the labyrinth of tunnels and steps, the myriad layers, and even more tunnels of slimy bricks that stretched out under the whole of London and carried away the waste and the unwanted, the lost.

“Very,” Pitt agreed, pulling his scarf tighter around his neck. Though it was only early September, he felt cold. The streets of Bluegate Fields were dank and smelled of poverty and human filth. It had once been a prosperous area, with high, elegant houses, the homes of merchants. Now it was one of the most dangerous of all the portside slums in England, and Pitt was about to descend into its sewers to examine a corpse that had been washed up against the great sluice gates that closed off the Thames’ tides.

“Right!” Froggatt stood aside, determined not to go first into the gaping hole with its wet, dark caverns.

Pitt stepped resignedly backward over the edge, grasped hold of the rungs, and began his careful descent. As the gloom closed in on him, the coursing water below sounded louder. He could smell the stale, entombed old water. Froggatt was also climbing down, his feet a rung or two beyond Pitt’s hands.

Standing on the wet stones at the bottom, Pitt hunched his coat higher onto his shoulders and turned to look for the sewer cleaner who had reported the discovery; he was there, part of the shadows—the same colors, the same damp, blurred lines. He was a little sharp-nosed man. His trousers, cobbled together from several other pairs, were held up by rope. He carried a long pole with a hook on the end, and around his waist was a large sacking bag. He was used to the darkness, the incessantly dripping walls, the smell, and the distant scurrying of rats. Perhaps he had already seen so many signs of the tragic, the primitive, and the obscene in human life that nothing shocked him anymore. There was nothing in his face now but a natural wariness of the police and a certain sense of his own importance because the sewers were his domain.

“You come for the body, then?” He craned upward to stare at Pitt’s height. “Rum thing, that. Can’t ’ave bin ’ere long, or the rats’d ’ave got it. Not bitten, it ain’t. Now who’d want to do a thing like that, I ask yer?” Apparently, it was a rhetorical question, because he did not wait for an answer but turned and scurried along the great tunnel. He reminded Pitt of a busy little rodent, his feet clattering along the wet bricks. Froggatt followed behind them, his bowler hat jammed fiercely on his head, his galoshes squelching noisily.

Around the corner they came quite suddenly upon the great river sluice gates, shut against the rising tide.

“There!” the sewerman announced proprietarily, pointing to the white body that lay on its side as modestly as could be managed. It was completely naked on the dark stones at the side of the channel.

Pitt was startled. No one had told him the body was without the ordinary decency of clothes—or that it was so young. The skin was flawless, no more than a fine down on the cheeks. The stomach was lean, the shoulders slight. Pitt knelt down, momentarily forgetting the slimy bricks.

“Lantern, Froggatt,” he demanded. “Bring it over here, man! Hold it still!” It was unfair to be angry with Froggatt, but death—especially useless, pathetic death—always affected him this way.

Pitt turned the body over gently. The boy could not have been more than fifteen or sixteen years old, his features still soft. His hair, though wet and streaked with filth, must have been fair and wavy, a little longer than most. By twenty he might have been handsome, when his face had had time to mature. Now he was pallid, a little swollen with water, and his pale eyes were open.

But the dirt was only superficial; underneath he was well-cared for. There was none of the ingrained grayness of those who do not wash, whose clothes stay on from one month to another. He was slender, but it was only the lissomeness of youth, not the wasting of starvation.

Pitt reached for one of the hands and examined it. Its softness was not due only to the flaccidity of death. The skin had no calluses, no blisters, no lines of grime such as the skin of a cobbler, a ragpicker, or a crossing sweeper would have. His nails were clean and well clipped.

Surely he did not come from the seething, grinding poverty of Bluegate Fields? But why no clothes?

Pitt looked up at the sewer cleaner.

“Are the currents strong enough down here to rip off a man’s clothes?” he asked. “If he were struggling—drowning?”

“Doubt it.” The cleaner shook his head. “Mebbe in the winter—lot o’ rains. But not now. Any’ow, not boots—never boots. ’E can’t ’ave bin down ’ere long, or rats’d ’ave bin at ’im. Seen a sweeper’s lad eaten to the bone, I ’ave , wot slipped and drowned a couple o’ year ago.”

He gave it some thought, allowing Pitt to savor the full delicacy of his expertise before he committed himself.

“Hours,” he said at last. “Depends where ’e fell in. Not more than hours, though. Current won’t take off boots. Boots stay on.”

Pitt should have thought of that.

“Did you find any clothes?” he asked, although he was not sure he could expect an honest reply. Each sewerman had his own stretch of channel, jealously guarded. It was not so much a job as a franchise. The reward lay in the pickings garnered under the gratings: coins, sometimes a gold sovereign or two, the occasional piece of jewelry. Even clothes found a good market. There were women who spent sixteen or eighteen hours a day sitting in sweatshops unpicking and resewing old clothes.

Froggatt hopefully swung the lantern out over the water, but it revealed nothing but the dark, oily, unbroken surface. If the depths held anything, it was sunken out of sight.

“No,” the sewerman answered indignantly. “I ain’t found nuffink at all or I would ’ave said. An’ I searches the place reg’lar.”

“No boys working for you?” Pitt pressed.

“No, this is mine. Nobody else comes ’ere—and I ain’t found nuffink.”

Pitt stared at him, uncertain whether he dared believe him. Would the man’s avarice outmatch his natural fear of the police if he withheld something? As well-cared-for a body as this might have been dressed in clothes that would fetch a fair price.

“I swear! God’s oath!” the sewerman protested, self-righteousness mixed with the beginnings of fear.

“Take his name,” Pitt ordered Froggatt tersely. “If we find you’ve lied, I’ll charge you with theft and obstructing the police in the investigation of a death. Understand me?”

“Is that with two ‘b’s?” Froggatt fished for his pencil and wrote carefully, balancing the lamp on the ledge.

“All right.” Pitt was satisfied. “Now you’d better help us get this poor creature up and outside to the mortuary wagon. I suppose he drowned—he certainly looks like it. I don’t see any marks of anything else, not even a bruise. But we’d better be sure.”

“Wonder who ’e was?” Froggatt said dispassionately. His beat was in Bluegate Fields, and he was used to death. Every week he came across children dead of starvation, piled in alleys or doorways. Or he found the old, dead of disease, the cold, or alcohol poisoning. “Suppose we’ll never know now.” He wrinkled his face. “But I’m damned if I can think ’ow ’e came to be down ’ere stark as a babe!” He gave the sewerman a sour look. “But I’ve got your name, my lad—and I’ll know where to find you again—if as I should want to!”

When Pitt went home that evening to his warm house, with its neat window boxes and scrubbed step, he did not mention the matter. He had met his wife, Charlotte, when he had called at her parents’ extremely comfortable, respectable home to investigate the Cater Street murders five years ago, in 1881. He fell in love with her then, never believing a lady of such a house would consider him as more than a painful adjunct to the tragedy, something to be borne with as much dignity as possible.

Incredibly, she had learned to love him as well. And although her parents hardly found the match fortunate, they could not refuse a marriage desired by a daughter so willful and disastrously outspoken as Charlotte. The alternative to marriage was to remain at home in genteel idleness with her mother or to engage in charitable works.

Since then, she had taken an interest in several of his cases—often to her own considerable peril. Even when she had been expecting Jemima, it had not deterred her from joining her sister Emily in meddling in the affair in Callander Square. Now their second child, Daniel, was only a few months old, and even with the full-time help of the maid, Gracie, she had plenty to occupy her. There was no purpose in distressing Charlotte with the story of the dead youth found in the sewers below Bluegate Fields.

When he came in, she was in the kitchen bending over the table with the flat iron in her hand. He thought again how handsome she was—the strength in her face, the high cheekbones, and the richness of her hair.

She smiled at him, and there was the comfort of friendship in her glance. He felt her warmth, as if in some secret way she knew not what he thought but what he felt inside, as if she would understand anything he said, whether his words were fluent or not, easy or awkward. It was a sense of coming home.

He forgot the boy and the sluice gates, the smell of the water. Instead, the quiet certainties washed over him, driving out the cold. He kissed Charlotte, then looked around at all the safe, familiar things: the scrubbed table, white with wear, the vase of late daisies, Jemima’s playpen in the corner, the clean linen waiting to be mended, a small pile of colored bricks he had painted as a toy—Jemima’s favorite.

Charlotte and he would eat and then sit by the old stove and talk of all kinds of things: memories of past pleasures or pains, new ideas struggling to find words, small incidents of the day.

But by noon the next day, the body under Bluegate Fields was forced back to his mind sharply and unpleasantly. He was sitting in his untidy office looking at the papers on his desk, trying to decipher his own notes, when a constable rapped on the door and, without waiting for an answer, came straight in.

“Police surgeon to see you, sir. Says it’s important.” Ignoring any acknowledgment, he opened the door wider and ushered in a neat, solid man with a fine gray beard and a marvelous head of curling gray hair.