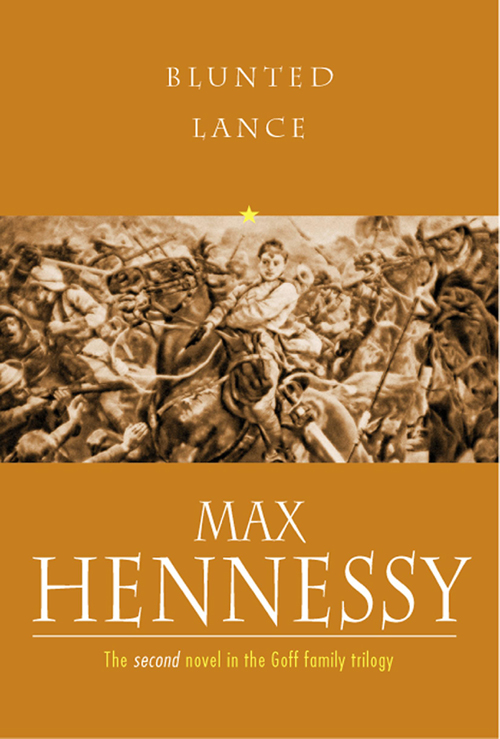 The right of Max Hennessy (John Harris) to be identified as the author of this work has been asserted.

This edition published in 2011 by House of Stratus, an imprint of

This is a fictional work and all characters are drawn from the author's imagination.
Any resemblance or similarities to persons either living or dead are entirely coincidental.

John Harris, wrote under his own name and also the pen names of Mark Hebden and Max Hennessy.

He was born in 1916 and educated at Rotherham Grammar School before becoming a journalist on the staff of the local paper. A short period freelancing preceded World War II, during which he served as a corporal attached to the South African Air Force. Moving to the Sheffield Telegraph after the war, he also became known as an accomplished writer and cartoonist. Other 'part time' careers followed.

He started writing novels in 1951 and in 1953 had considerable success when his best-selling
The Sea Shall Not Have Them
was filmed. He went on to write many more war and modern adventure novels under his own name, and also some authoritative non-fiction, such as Dunkirk. Using the name Max Hennessy, he wrote some very accomplished historical fiction and as Mark Hebden, the 'Chief Inspector' Pel novels which feature a quirky Burgundian policeman.

Harris was a sailor, an airman, a journalist, a travel courier, a cartoonist and a history teacher, who also managed to squeeze in over eighty books. A master of war and crime fiction, his enduring novels are versatile and entertaining.

The Civil War In America

Sitting on a rock on the Jebel Surgham overlooking the Nile at Omdurman, Lieutenant Dabney Augustus Rollo Goff studied the book he had taken from his saddle bag. It was always with him. What his father had set down of the war in America seemed of enormous help to a subaltern uncertain of his skill and dubious of the ability of his commanding officer.

The Old Man, he thought warmly, was not only more than a little articulate, he was quite a boy. And, at the age of sixty-two, still was. Willing to drop a rank to lead the cavalry under Gatacre, his junior in years and military position, in the force commanded by Horatio Herbert Kitchener, Sirdar of Egypt – who was junior even to Gatacre – he was at that moment inside the zariba, the barricade of timber and thorns the army had built round the mud-walled village of El Egeiga, awaiting on this second day of September, 1898, the arrival of the Dervish army of the Khalifa. And, Dabney decided, he wouldn’t have very long to wait either, because faintly in the distance he could already hear the elephant tusk war-horns beginning to sound in a chorus that was being taken up in the shriller, brassier notes of cavalry trumpets and the drums and fifes of the British infantry standing to arms with their backs to the River Nile.

The mooings from the south – like the sound of cattle distressed by lack of water – had lifted the head of Dabney’s sergeant and he was staring over the rocks of the ridge they were on, a deep frown on his face, all cars and eyes and nervous concern. As he turned, his gaze fell on Dabney’s book and he grinned because he knew as well as everyone else what it was.

‘Just reading what the general would ’ave done, sir?’ he asked.

Dabney smiled. ‘I’m sure he’d have had some answer, Sergeant.’

One of a spray of officer’s patrols thrown out by the 21st Lancers, they waited quietly, anxious despite their training. They had cantered out of the zariba in darkness, their instructions to watch the advance of the Dervish army, all a little concerned about the unseen black-skinned figures that might spring up from among the rocks wielding broad-bladed spears, and all more than glad to see the daylight.

‘They’ll not come now,’ the sergeant decided. ‘It’ll be tonight. They’ll come in the dark.’

‘I wouldn’t be too sure of that, Sergeant,’ Dabney said. ‘They’re a bit of an unknown quantity.’

In front of them the sandy plain stretched away from the river with its fringe of starveling grass and thorn bushes. It was one of the most inhospitable places in the world. You woke in the morning in the same hot wind that sent you to sleep, your eyes, nose and throat choked with sand, the folds of your clothes filled with dust; and to add to your pleasure there were always spiders, scorpions, camel thorn, boils, ulcerated throats, heat apoplexy and enteric fever. Even the horses caught sunstroke.

The desert was almost salmon in colour and it was already beginning to shimmer and dance in the heat. The hot restless breeze was rattling away in the distance like an approaching train, nagging at the thick thorny bushes by the Nile which looped and turned its muddy course round the army so that wherever you looked it seemed to be there.

Even as the sergeant spoke, Dabney saw the Dervish army. They had known all along where it was and during the hours of darkness the one thing they had been afraid of was that it would come when it was hard to tell the direction of the attack. Now, though, as the light paled, they saw the dark mass in front, like a great shadow across the rosy-buff waste of sand, enormous masses of men joined together by thinner lines, like tendrils, while behind and on the flanks the reserves had been halted, like dark blurs and streaks across the desert.

‘Jesus,’ the sergeant said quietly, peering over his horse’s back. ‘There’s a lot of the bastards!’

‘Yes, Sarge.’ The voice came quietly from among the rocks. ‘And they’ve got their rib-ticklers with ’em. You can see the sun on ’em!’

It was true. The Dervish army seemed to be lit by a curious glow that came from the first rays of light catching the polished blades of the spears they carried.

For savages, the Dervishes’ formation was surprisingly professional. There were immense numbers of them, their front nearly five miles long, and ahead of them emirs, scouts and patrols moved. Their cheering was still faint, but it came to the Jebel Surgham like the sound waves or the tumult of the sea before a storm.

‘They’re coming this way, sir! It won’t be safe here much longer.’

The sergeant sounded a trifle uneasy and Dabney stuffed his father’s book into his saddle bag.

‘No,’ he agreed. ‘Time we were getting back. Mount the men, Sergeant!’

As they cantered back, another patrol from further north joined them, led by Winston Churchill, of the Hussars. The horses looked far from their best because, while the infantry had been brought most of the way to Omdurman in barges, the cavalry had been obliged to make their own weary way, and the long march alongside the chocolate-coloured water of the Nile had brought a serious deterioration in the condition of the mounts.

Churchill looked eager and ready for action, however. ‘Hello there, Goff,’ he rasped in his strong lisping voice. ‘Been getting a view of the Mahdi’s tomb?’

Dabney smiled. Neither of them belonged to the 21st, whose men they were leading, and both had pulled strings to get themselves attached for the campaign.

‘Drill’s good,’ Churchill observed as they rode alongside each other. ‘Kitchener’s going to get his battle after all.’

There was a feeling in the 21st that Churchill was too big for his boots, because he was a nephew of the Duke of Marlborough and Randolph Churchill’s son. He was considered to be bumptious and said to collect campaign medals because he intended to go into politics, and a season of having fought for the Empire would do him a lot of good. It was well-known that Kitchener disliked him, because he detested newspapermen and, in addition to his duties as a soldier, Churchill was representing one of the London dailies.

In front of them now were the brown masses of the British and Egyptian infantry, with a fringe of cavalry dotting the plain in front. Churchill’s hand moved as he gestured at the vultures wheeling in the brassy sky above them.

He drew rein, turned in the saddle and stared back over the plain to where the Dervish mass was still moving towards them.

‘Well,’ he said, ‘it confounds all the optimists who insisted they’d come last night. Smith-Dorrien didn’t want a night attack.’

‘Smith-Dorrien,’ Dabney pointed out, ‘like my father, was one of the survivors of the massacre at Isandhlwana. Neither of them are keen on hand-to-hand fighting. They prefer to keep ’em at a distance.’

The zariba looked strong enough as they approached it. The previous night had been brilliant as the rain had stopped and the soldiers had been nervous, but there had been nothing but breeze and shadows and, in the distance, the ominous throbbing of drums and the moans of elephant tusk war-horns. They had been roused before daylight, grumbling after an uneasy sleep full of nervous muttering and peering into the darkness. There had been the usual hawking, spitting and lighting of pipes, as they had rubbed chilled bones and dressed by the light of the moon, throats raw from the perpetual wind and the everlasting sand. They were all now hoping the Dervishes would attack them. With the same hope of standing in defence, doubtless the Dervishes were hoping the British would attack
them.