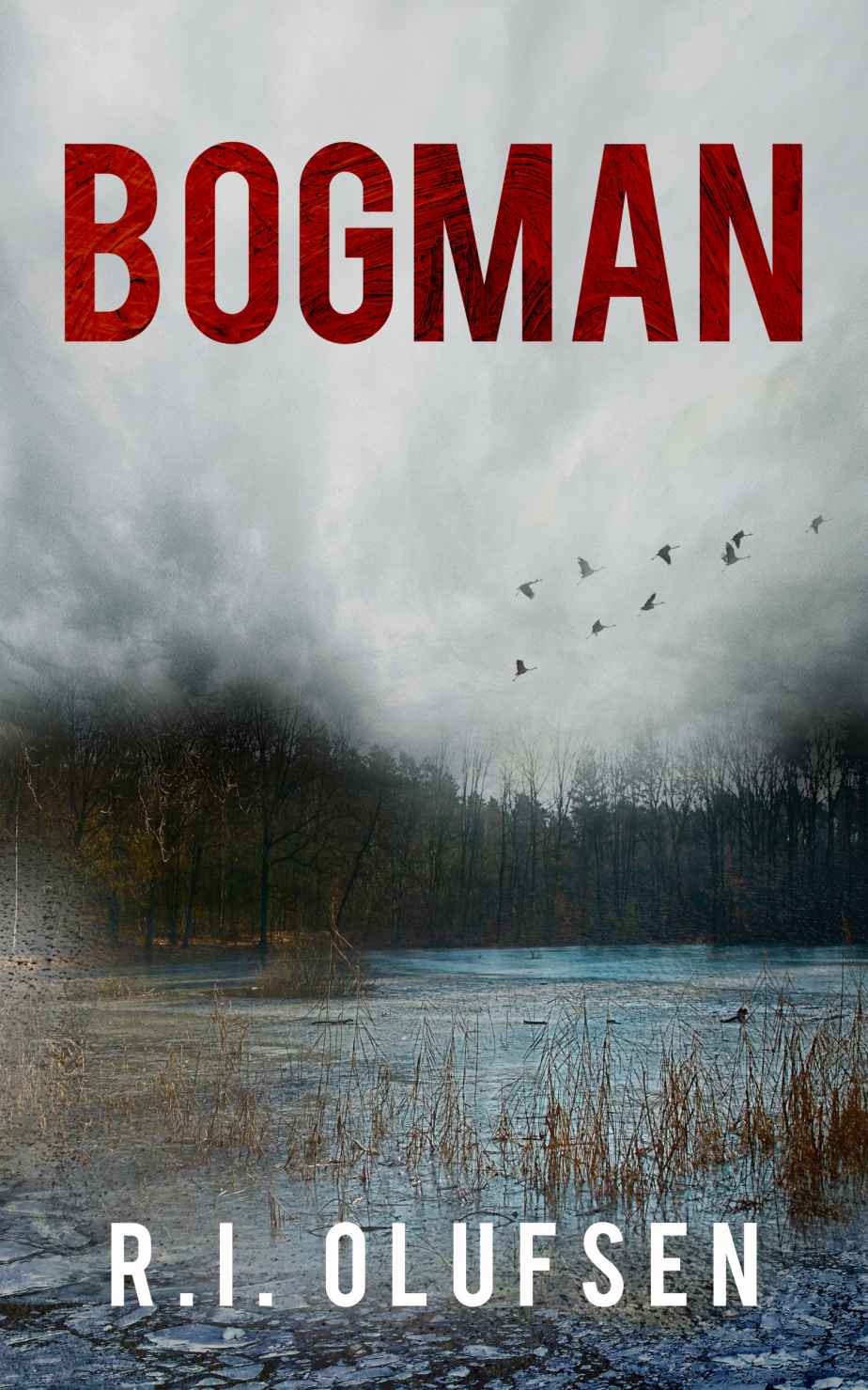 R.I. Olufsen has a background in investigative journalism and broadcasting. She enjoys travel, good food, golf and literary puzzles.
Bogman
is her first crime novel.

Tobias Lange was playing golf when he got the call about the body in the bog. The match, against his stepmother’s fiancé, Norbert Fisker, was friendly but a little tense. The two men were wary of each other. Norbert had only recently got engaged to Tobias’s stepmother. Tobias was checking him out at the request of his stepsister who lived in England. Tobias quickly realised Norbert knew he was being checked out. He was no fool. Tobias thought him pleasant, if a little dull. His stepmother, Inge, was a handsome, lively woman. Tobias wasn’t surprised she was getting married again. But he couldn’t work out why she had chosen Norbert who was no match for her, either in looks or in style.

“Your mother is lonely, Margrethe,” Tobias had said to his stepsister when she telephoned demanding to know more about ‘this man mother met on a cruise.’ She wants someone to share things with. She’s been on her own for five years.” A faint shock ran through him as he said it. His father had been dead five years. Five years! It still felt like a few months.

“She only met this man in February. It’s too soon,” said Margrethe.

“Not when you’re sixty-two,” said Tobias. “And Norbert is sixty-five. I think they just want to get on with it.”

He had already run Norbert’s name through the police computer and discovered nothing more than a fine for speeding some ten years earlier.

“Your mother is young at heart, Margrethe. As long as this man isn’t a serial killer or after her money, or both, we should be glad she’s going to have company in her old age.”

Margrethe had made one of those harrumping noises that signify dissent. “We’ll see,” she said.

By the time they got to the ninth tee, Tobias had learned that Norbert’s only interests, beyond running his waste disposal company, were golf and fishing; that his wife had died two years earlier; that he had a daughter who was divorced; that he was learning bridge to please Inge.

Tobias had already concluded that Norbert had plenty of money. Skovlynd Golf and Country club was frequented by rich people. A dark blue Bentley, so highly polished it reflected the smaller cars around it, dominated the car park. He hoped it didn’t belong to Norbert. The green fee Norbert had insisted on paying for him, “No, no, let me do this. You’re my guest,” was steeper than at any other course Tobias had played in Denmark. They’d had an excellent lunch. Norbert had been greeted by any number of expensively suited men, including a distant relative of the Royal Family.

Tobias liked the course – rated one of the best in the country. It hadn’t rained. He had played well, despite losing a ball in the lake on the ninth hole, and now he had a putt on the eighteenth to finish the match all-square. That would be a satisfactory result. He was looking forward to a relaxing dinner. His stepmother was an excellent cook.

He was bringing the head of the putter to the back of the ball when the mobile phone in the back pocket of his trousers buzzed like a saw. He flashed an apologetic smile at Norbert.

His ball trundled past the hole. He swore softly.

“This had better be urgent,” said Tobias into the phone.

Two men stood on the wide terrace outside the bar and restaurant overlooking the eighteenth green. One was blond and imposing. He wore plus fours in brown checked tweed. His companion was shorter, greyer and more muscular. He wore a discreet business suit and carried a briefcase. They both stared disapprovingly at Tobias.

Norbert saluted them with a wave of his hand and mouthed the word, “Police.”

Doctors, priests and policemen were exempt from the prohibition against mobile phones on the golf course.

Tobias held the phone to his ear. He was as still as a hawk in a tree. After a few minutes he said, “Yes, yes, do that. I’ll get over there before dark to take a look.” He stowed the phone in his pocket.

“They’ve found a body in a bog west of the E45,” he said. “A place called Roligmose. They think it could have been there at least a thousand years.”

“A bog body. That’s exciting.” Norbert putted his own ball across the green and watched it drop into the hole. “I’ve only ever seen a bog body in a museum.”

“Me too.” Tobias had a sudden image of himself aged seven, gripping his father’s hand, only letting go to press his hands and face against the glass case with the leathery brown body curled up inside as though asleep. He had been mesmerised by Tollund Man’s eyelashes, the red stubble on his chin, the peaceful expression on his face. He lay on a mossy carpet, his cheek scrunched up against it as though resting on a pillow. Tobias remembered his shock at seeing the rope around Tollund Man’s neck and felt again the pang of compassion that had blown his heart open. ”I’ve never forgotten him,” he said.

“There hasn’t been a find in a long time,” said Norbert.

“There were a couple of bog bodies in Ireland in the last ten years,” said Tobias. “But nothing here since the nineteen-forties.”

They shook hands and walked off the green. The man with the briefcase had disappeared into the clubhouse. The man in the plus fours came down the steps from the terrace calling out, “I’m delighted to see you are on good terms with the police, Norbert.”

Goldfinger, thought Tobias. From the James Bond film. The smooth-smiling man advancing towards them wasn’t fat like the actor whose name Tobias couldn’t remember, but he had the same what-I-don’t-own-I-can-buy air about him.

“I’m being interrogated by my future son-in-law,” said Norbert. “Chief Inspector Tobias Lange from the Criminal Investigation Unit in Aarhus.”

“Kurt Malling,” said Goldfinger. He shook hands with Tobias. “Welcome to the club. I know the Commissioner. I was chatting to him in Copenhagen last week.” He clapped Norbert on the shoulder. “We must have a game sometime, Norbert. I’ll have a look in my diary. I’m tied up at the moment. I’m about to have my photograph taken. Advance publicity for the Hickory club competition I’m hosting in July. And I dare say you’ve heard I’m going into politics? But I’ll pick out a few dates and get in touch.” He nodded at Tobias. “Nice to meet you, Chief Inspector.” He raised his hand in farewell and strode off in the direction of the car park.

Norbert said, “When I was a young man making my way in the waste disposal business, I hated people who told me they were friends with my boss.”

Tobias immediately warmed to him.

“Maybe you’ll be Commissioner one day,” said Norbert cheerfully. He paused. “But maybe not. You don’t strike me as much of a back-slapper. Kurt is a great back-slapper as well as a name-dropper. Hickory competition. That explains the fancy pants. And he’s going into politics. I bet it’s a fund- raiser. He’s never asked me for a game before. I suppose he’ll want a donation for the party.”

They changed their shoes in the locker room and carried their clubs to Norbert’s car.

“I’m sorry you have to dash off. I’ve texted Inge. She’ll be disappointed you can’t stay and have dinner with us.” Norbert paused. “You know, I can’t believe my luck in meeting her. I wanted you to see how happy we both are. I was devastated when my wife died. I thought I wouldn’t be able to go on. I was like a zombie. The business kept me going. Then I met Inge and it was like coming to life again.” He threw both sets of clubs into the boot of the car. “You never re-married, Tobias?”

Tobias hesitated. Words swam around in his head. Hope. Duty. Love. Disappointment. Anger. Dislike. Had he known Norbert better, he might have attempted to string them together in a narrative. He shook his head.

“It would take a lot to tempt me.”

They saw Kurt Malling again as they were driving out of the car park. He was standing beside the Bentley talking to the man with the briefcase.

“The last time I saw a man in plus fours like that with a man in a business suit they were in a James Bond film,” said Tobias. “It was on television at Christmas. There was a scene on a golf course. The man in the suit was a killer called Oddjob.”

Norbert laughed. “I remember. He decapitated people with a steel-rimmed bowler hat. I can’t imagine Marcus Thomsen killing anybody. He’s Malling’s in-house lawyer. I often see them together. I hear Malling is building a golf resort in the Philippines. It’s probably easier than building one in Denmark. The Lord knows they had a big enough problem with this one.”

“Finance wasn’t the problem,” said Norbert. “Protestors were the problem. Eco warriors. The kind of lunatics who chain themselves to trees. They were against the golf course being built.”

Tobias turned to look back at the gently rolling, tree covered landscape.

“You’d hardly know there was a golf course here,” he said.

“Oh, there’s still plenty of forest,” said Norbert. “With plenty of my balls in it as well. And it looks like any other forest to me. But the green brigade argued it was home to some rare species of bat. Plus they wanted to stop all golf course development. Too many pesticides and so on.” He shook his head. “I don’t much care for Malling. He’s an arrogant bugger. But he owns three courses, they’re all good and they all provide employment.”

“This was about fourteen or fifteen years ago,” said Norbert. “They went on for a couple of years. They set up a camp in the forest. They chained themselves to the trees. They lay down in front of the diggers. They drove equipment into the wall of the clubhouse. They drilled into the concrete lining of the lake on the ninth.”

He turned into the driveway of a baroque-style manor house with two wings, a mansard roof, and a formal garden at the front.

“It’s an exact copy of a manor house on Funen,” said Norbert proudly. “I used to pass it on the way to my grandparents on the bus.” He parked on the sweep of gravel near the wide steps to the front door and rested his hands on the wheel. “I grew up in a small flat in Odense. Three of us shared a bedroom. We played in the street. I swore if I ever got rich I would have a house like this with enough bedrooms and bathrooms for my parents, my children, their children, guests. I built it when I made my first five million kroner. Garbage disposal is essential and lucrative, but it’s not fashionable, not nice.” He wrinkled his nose and then smiled broadly. “One or two snobs I know look down on me. But I tolerate them.”