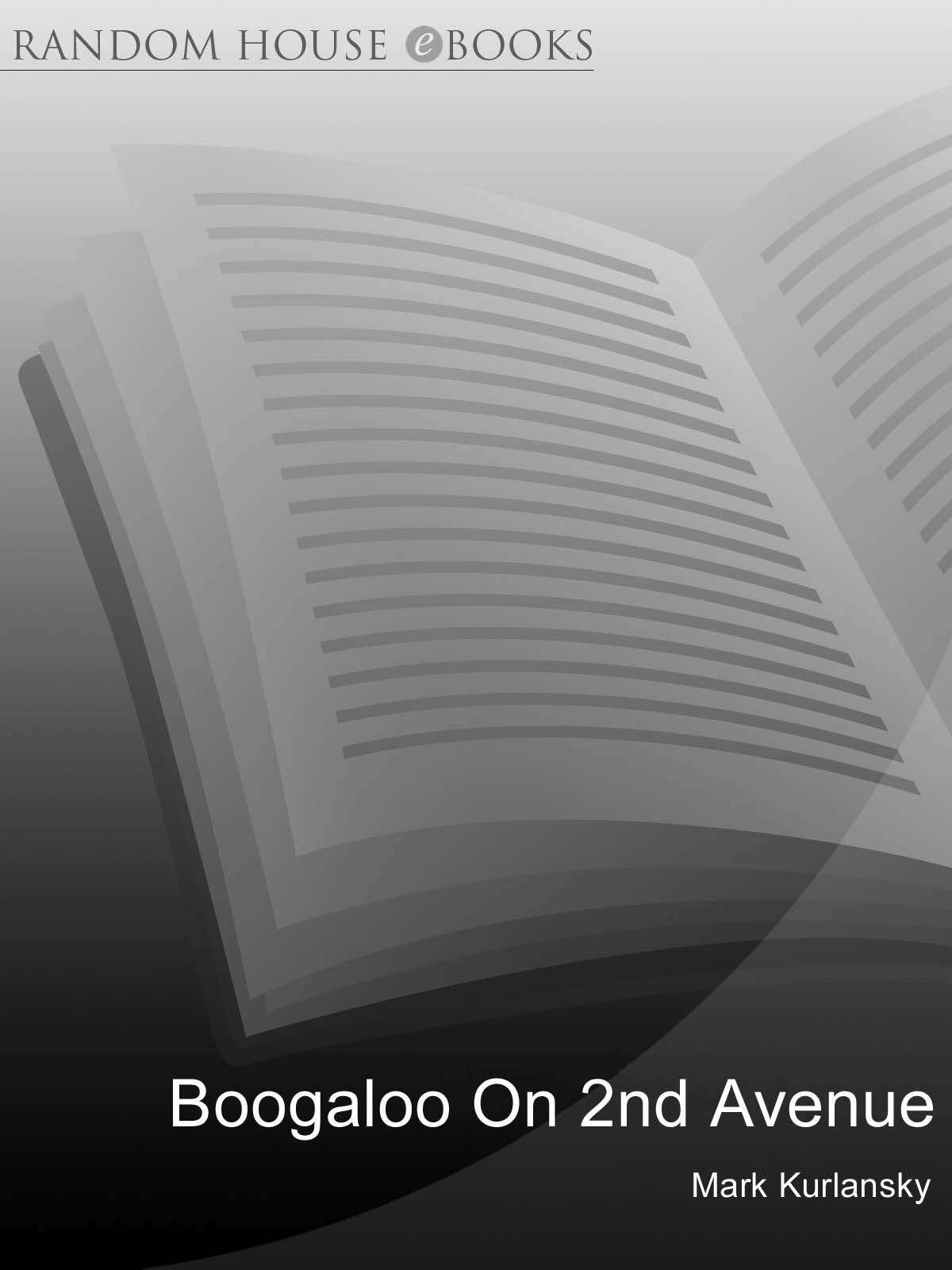 Mark Kurlansky is the bestselling author of
Cod: A Biography of the Fish that Changed the World
(winner of the Glenfiddich Best Food Book Award),
The Basque History of the World, Salt: A World History, 1968: The Year That Rocked the World
and a short story collection,
The White Man in the Tree.
He lives in New York City with his wife and daughter.

Salt: A World History
The Basque History of the World
Cod: A Biography of the Fish That Changed the World
A Chosen Few: The Resurrection of European Jewry
A Continent of Islands: Searching for the Caribbean Destiny
Choice Cuts: A Miscellany of Food Writing
1968: The Year That Rocked the World

A Novel of Pastry, Guilt and Music

Mark Kurlansky has asserted his right under the
Copyright, Designs and Patents Act, 1988 to be identified
as the author of this work

First published in the United States in 2005 by The Ballantine
Publishing Group, a division of Random House, Inc., New York, and
simultaneously in Canada by Random House of Canada Limited,
Toronto.

First published in Great Britain in 2005 by Jonathan Cape

This is a work of fiction. Names, characters, places, and incidents are
the products of the author's imagination or are used fictitiously. Any
resemblance to actual events, locales, or persons, living or dead, is
entirely coincidental.

Interior illustrations by the author

Grateful acknowledgment is made to the following for permission
to reprint previously published material:

To the old neighborhood with love,
and to Marian, the beautiful native girl on my island paradise

To Dr. Phyllis Caroff for her insights into the disorder of claustrophobia, including the wonderfully relevant observation that the condition can be aggravated by chocolate.

To Rubge Monet for advice on Yiddish.

To Daryl Sherman for straightening me out on Gershwin and for the way she plays it.

Thanks to Nancy Miller for her support, friendship, and guidance, to Charlotte Sheedy for her backing, wisdom, and sense of fun, to Deborah Copeland for her assistance and enthusiasm, to Deirdre Lanning for all her help, and to Carolyn Kim, whose reassuring presence at the other end of the phone always brings order to seeming chaos.

And to so many friends over so many years on the Lower East Side and the Loisaida,
gracias
and
a dank.

CHAPTER ONE
A Quick End in Four-Four Time

E
LE
R
ABBINOWITZ
was shaped like a hamster, though larger and somewhat less furry As Sonia Cohn Seltzer applied her long, skilled fingers to his rubbery white flesh, he squeaked and sighed— noises that reminded her of his rodentlike qualities.

Lying on his stomach, he reached around with his pale, stocky arm. "Touch it. Touch it," he murmured. "I'll pay extra." Grabbing her wrist, he started to turn over.

Sonia freed her hand and smacked him with a towel, a hard blow with a limp club.

"I warned you. Get out and don't come back." She exited the small room by what looked like a closet door but actually led to the rest of her apartment. Without her, the room looked antiseptic except for a Chagall print of a couple floating over rooftops. The door was slammed and locked and Sonia went back to her desk to work on her play about Emma Goldman, the anarchist, while her husband looked after their daughter in another room.

"Aayoych," said Eli, blending several Yiddish and American expletives. Then he got dressed and left, turning down Avenue A, which was already a bit redolent as the early summer heat cooked the trash on the street. Furniture was placed neatly along the garbage-strewn edges of sidewalks—a special place where things were found and things were given away every day. The streetlamps in metallic paint were wrapped with paper flyers up to seven feet up the poles, like badly laid strudel dough, leaves dangling, advertisements for everything, some legal, including the exact time and place for demonstrations that had already been missed against every known form of repression. The trashy streets were occupied in shifts—different people at different hours of the day The older people, such as Eli, were out first, beaten only by those who had spent the night on the sidewalk. Then the smarts, the new young people, walked quickly to the subways to their promising jobs in other neighborhoods. At eleven, shaggy young people staggered out into the blinding sunlight looking as though they had spent the night with drugs and sex and not much food or sleep. But soon the smarts would be home from their jobs and the streets filled with the entire assortment.

The tenement buildings were color-coded for age—not of the buildings, but of the last paint job. The oldest were brick red—a color designed to match the bricks, which it never quite did. Then there was forest green, that too one of the older colors, a nonbotanical attempt at greening a working-class neighborhood. More recently, buildings were painted battleship gray—paint that was said to have been left over from World War II and designed to obscure warships on a gray day at sea. Buildings painted in the sixties when the neighborhood became the East Village were in colors that escaped any rational explanation, such as orange, hot bubble-gum pink, deep purple—once brilliant but now dull as dirt. The psychedelic storefronts looked more out-of-date than the tenement buildings themselves. Then the Puerto Ricans brought cobalt, which was very big on Avenues A and B, and the Dominicans came with turquoise, and now the smarts were there with cream, peach, café au lait, and buff—colors that were so up-market, they did not even try to hide dirt.

It was raining, an unimportant warm summer drizzle that caused puddles to form in the ruts of the pockmarked asphalt streets uneven from one failed repaving over another; even a few cobblestones showed through in places. Eli saw his feet but did not bother to notice the paint-splattered sidewalks of street art that everyone gazed at and no one looked at deliberately—street artists must know that the street is the perfect spot for subliminal messages.

Walking in the fast Jewish four-beat, Eli headed toward the kosher dairy restaurant on Houston Street of which he was the unloved owner.

Chow Mein Vega, who knew more about rhythm than anyone else in the neighborhood, had a theory. He claimed that Latins and Jews walked to different beats—that Jews walked to a very fast four-beat. "You can clap your hands to it," he would say. "You can almost hear that short loud 'Hey!' between measures—dom-domdom dom—hey. Latinos have a three-beat like a cha-cha-cha. One,
du
—dat-dat-dat. It moves your body a lot more, but it doesn't get you down the street nearly as fast. Jews get there faster with less effort and don't understand that the Puerto Ricans' way is style." Chow Mein made a graceful sweep with his arm to illustrate, then added, as though he had just had the thought, "Of course, the Puerto Ricans don't understand that this is why the Jews always get there first. Dominicanos are even more slowed down by that syncopated thing. That little
'y
between the downbeat and the second beat. That's why, have you ever noticed how long it takes a Dominicano to get somewhere?"

Rabbinowitz's restaurant was closed and the Dominicanos were cleaning up Outside, the union picketers were bundling up their angry signs and getting ready to leave. They didn't acknowledge the fast-paced, short, stocky Eli Rabbinowitz, whom they vilified in chant and by placard every evening. And he ignored them.

Since most of the neighborhood's blintz and kreplach eaters were pro-union, the picketing, in the words of Eli Rabbinowitz, "is killing me." But he would not give in. The Poles and Ukrainians had an endless supply of immigrants who worked for nothing, and they weren't picketed because their customers wouldn't care. So why should he pay union scale? "Who's going to buy a ten-dollar blintz?" he would say "These guys are killing me. A bunch of Communists. Like my father. That's why we never had anything." And soon all the sufferings of his childhood were blamed on these ten people who had been picketing his restaurant for the last three months.

It was early Thursday evening, the evening when Eli Rabbinowitz picked up the restaurant's revenues in a canvas bag and deposited them at the bank.

"These schmucks are killing me," he said once more as he closed up the canvas bag with a few thousand dollars instead of the tens of thousands he had deposited on Thursday nights before he was singled out.

"Killing me," he muttered as he made his way up First Avenue to the deposit box on Fifth Street. In the fast Jewish four-beat, Rabbinowitz and his money were getting to Fifth Street quickly, charting a determined course around the amblers and street hustlers brought out by the first heat of summer and the halfhearted cooling rain, which had already stopped. One two-three four—hey!

A man was waiting for him, a large, dark-skinned man with eyes that seemed unable to focus. The pupils looked wide enough to take in all the night light on Fifth Street. He blinked continually as his shaking hands lifted an automatic pistol of a dull-finished metal, the first bullet already in the chamber, to the back of Eli Rabbinowitz's head. The steady finger of his shaking hand squeezed the trigger, jerking Eli forward and exploding most of his face onto the brass fittings of the night deposit box. The police would observe that the assailant must have been much taller than the victim. This was deduced by the downward angle from the entry wound at the top of the head and the low height of the place where the pieces that had been Eli Rabbinowitz's face hit the wall and the box. A pool of dark blood marked the spot on the sidewalk where Eli's body fell without the canvas bag. Rabbinowitz probably died instantly, but had he lived another minute, he might have laughed at the thought that because of the picketing, the thief had lost out on more than $10,000.

Outlaw | Bad Boy Motorcycle Club Alpha MC Romance by Rose Cody
Snapshot by Angie Stanton
The Seed Underground: A Growing Revolution to Save Food by Ray, Janisse
Aleación de ley by Brandon Sanderson
Family In The Making (Matchmakeing Babies 2) by Jo Ann Brown
Bishop as Pawn by William X. Kienzle
One in a Million by Susan Mallery
Heaven Is for Real: A Little Boy's Astounding Story of His Trip to Heaven and Back by Todd Burpo, Sonja Burpo, Lynn Vincent, Colton Burpo
The Second Life of Nick Mason by Steve Hamilton
Touch of the Angel (Demons of Infernum, #3) by Rosalie Lario