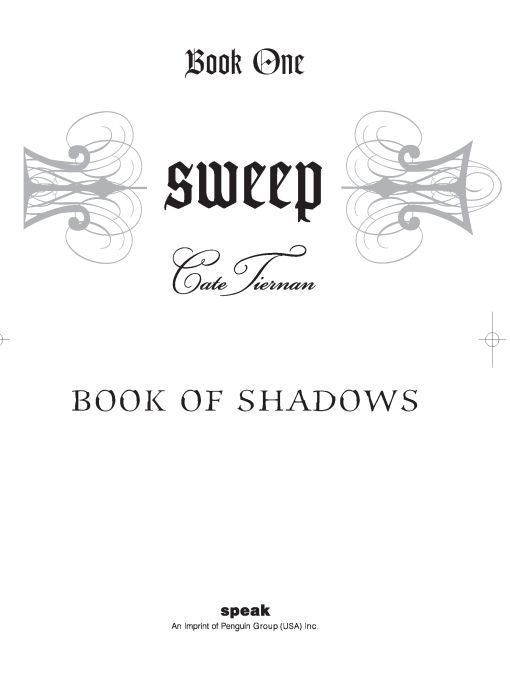 Table of Contents
Title Page
Copyright Page
Dedication
Chapter 1 - Cal Blaire
Chapter 2 - I Wish
Chapter 3 - The Circle
Chapter 4 - Banishing
Chapter 5 - Headachy
Chapter 6 - Practical Magick
Chapter 7 - Metamorphosis
Chapter 8 - Cal and Bree
Chapter 9 - Thirsty
Chapter 10 - Fire
Chapter 11 - Water
Chapter 12 - What Goes Around
Chapter 13 - Stirring
Chapter 14 - Deeper
Chapter 15 - Killburn Abbey
Chapter 16 - Blood Witch
Chapter 17 - Trapped
Chapter 18 - Consequences
Chapter 19 - A Dream
Chapter 20 - Broken
Chapter 21 - The Thin Line
Chapter 22 - What I Am
sweep Book Two
sweep Book Three
sweep Book Four
sweep Book Five
sweep Book Six
A talent emerges. . .
Suddenly Cal pushed himself off the bench he’d been leaning against and came to stand in front of me. “What do I have behind my back?” he asked.
My brow creased for a second, then I said, “An apple. Green and red.” It was as if I had seen it in his hand.
He smiled, and his expressive, gold-colored eyes crinkled at the edges. He brought his hand from around his back and handed me a hard,greenish red apple, with a leaf still attached to its stem.
Feeling awkward and shy, aware of everyone’s eyes on me, I took the apple and bit it, hoping the juice wouldn’t run down my chin.
“Good guess,” Raven said, sounding irritated. It occurred to me that she was probably jonesing for Cal big time.
“It wasn’t a guess,” Cal said softly, his eyes on me. With love to my life supports
Christine and Marielle
1
Cal Blaire
> <“Beware the mage, and bid him well, for he has powers beyond your ken.”
—WITCHES, WARLOCKS, AND MAGES, Altus Polydarmus, 1618> <

I wore a green tie-dyed T-shirt and jeans. My best friend, Bree Warren, arrived in a peasant shirt and a long black skirt down to her violet toenails, and of course she looked beautiful and sophisticated.
“Hey, junior,” she greeted me with a hug, even though I’d just seen her the day before.
“See you in AP calc,” I told Janice Yutoh, and met Bree halfway down the front steps. “Hey,” I said back. “It’s hot. It’s supposed to be crisp on the first day of school.” It wasn’t even eight-thirty, but the early September sun was burning whitely, and the air felt muggy and still. Despite the weather I felt excited, expectant: A whole new year was starting, and we were finally upperclassmen.
“Maybe in the Yukon Territory,” Bree suggested. “You look great.”
“Thanks,” I said, appreciating her diplomacy. “You too.”
Bree looks like a model. She’s tall, five-nine, and has a figure most girls would starve themselves for, except Bree eats everything and thinks dieting is for lemmings. She has minky dark hair that she usually gets styled in Manhattan, so it falls in perfectly tousled waves to the base of her neck.Wherever we go, people turn their heads to look at her.
The thing about Bree is that she knows she’s gorgeous, and she enjoys it. She doesn’t shrug off compliments, or complain about her looks, or pretend she doesn’t know what people are talking about. But she isn’t exactly conceited, either. She just accepts what she looks like and thinks it’s cool.
Bree glanced over my shoulder at Widow’s Vale High. Its redbrick walls and tall Palladian windows betrayed its former incarnation as our town courthouse. “They didn’t paint the woodwork,” she said. “Again.”
“Nope. Oh my God, look at Raven Meltzer,” I said. “She got a tattoo.”
Raven’s a senior and the wildest girl in our school. She has dyed black hair, seven body piercings (that I can see, anyway), and now a circle of flames tattooed around her belly button. She’s amazing to look at, at least for me—Ordinary Girl, with my long, all-one-length, medium brown hair. I have dark eyes and a nose that could kindly be described as “strong.” Last year I grew four inches, so I’m five-six now. I have broad shoulders and no hips and am still waiting for the breast fairy to show up.
Raven headed to the side of the cafeteria building where the stoners hung out.
“Her mom must be so proud,” I said cattily, but inside I admired her daring. What would it be like to care so little about what other people thought of you?
“I wonder what happens to her nose stud when she sneezes?” asked Bree, and I giggled.
Raven nodded to Ethan Sharp, who already looked wasted at eight-thirty in the morning. Chip Newton, who’s absolutely brilliant in math, way better than me, and our school’s most reliable dealer, gave Raven a soul handshake. Robbie Gurevitch, my best friend after Bree, looked up and smiled at her.
“God, it’s so weird to see Mary K. here,” said Bree, glancing around and running her fingers through her wind-tossed hair.
“Yeah. She’ll fit right in,” I said. My younger sister, Mary Kathleen, was headed toward the main building, laughing with a couple of her friends. Next to most of the freshmen, Mary K. looked mature and together, with grown-up curves. Stuff just comes easily to Mary K.—her hip but not-too-hip clothes, her naturally pretty face, her good but not perfect grades, her wide circle of friends. She’s a genuinely nice person, and everyone adores her, even me.You can’t help it with Mary K.
“Hey, baby,” said Chris Holly loudly, coming up to Bree. “Hey, Morgan,” he said to me. Chris leaned down and gave Bree a quick kiss, which she caught on her lips.
“Hey, Chris,” I said. “Ready for school?”
“Now I am,” he said, giving Bree a lustful smile.
“Bree! Chris!” Sharon Goodfine waved, gold bangles clinking on her wrist.
Chris grabbed Bree’s hand and pulled her toward Sharon and the other usuals: Jenna Ruiz, Matt Adler, Justin Bartlett.
“Coming?” Bree asked, falling behind.
I made a wry face. “No, thank you.”
“Morgan, they like you fine,” Bree said under her breath, reading my mind as she often did. She’d dropped Chris’s hand, waiting for me while he went on ahead.

With This Kiss: Part One by Eloisa James
Catwalk by Melody Carlson
Dangerous Waters by Johnson, Janice Kay
The Elfstones of Shannara by Terry Brooks
Watcher by Grace Monroe
Jasmine and Fire by Salma Abdelnour
Beyond the Black River by Robert E. Howard
A Sister's Secret by Wanda E. Brunstetter
A Guardian of Innocents by Jeff Orton
A Knife in the Back by Bill Crider