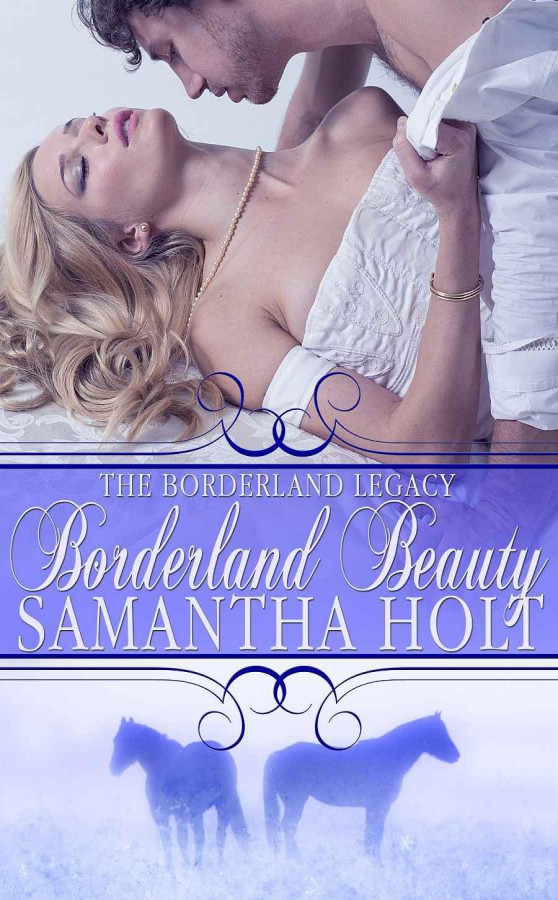 Lord Dominic is in need of a wife. With the reivers, the wild and dangerous criminals that haunt the borderlands, breathing down his neck and his brother now married, he needs a strong woman by his side. So when he finds out about an old marriage contract between him and his neighbour’s daughter, he vows to give the mysterious woman a chance.
Upon meeting the beautiful, feisty maiden, he vows to make her his wife.

Lucy Montgomery wants nothing to do with the arrogant lord. She doesn’t understand his interest in her. Surely a man like Dominic could never fall for a woman like her? Hurt by the past, she refuses to believe that she is anything more than a game to him.
If only she didn’t find him quite so charming.

Can Dominic persuade Lucy that she is more than just another woman to him?
And with the reivers growing bolder, are there worse dangers than Lucy saying ‘Nay’? 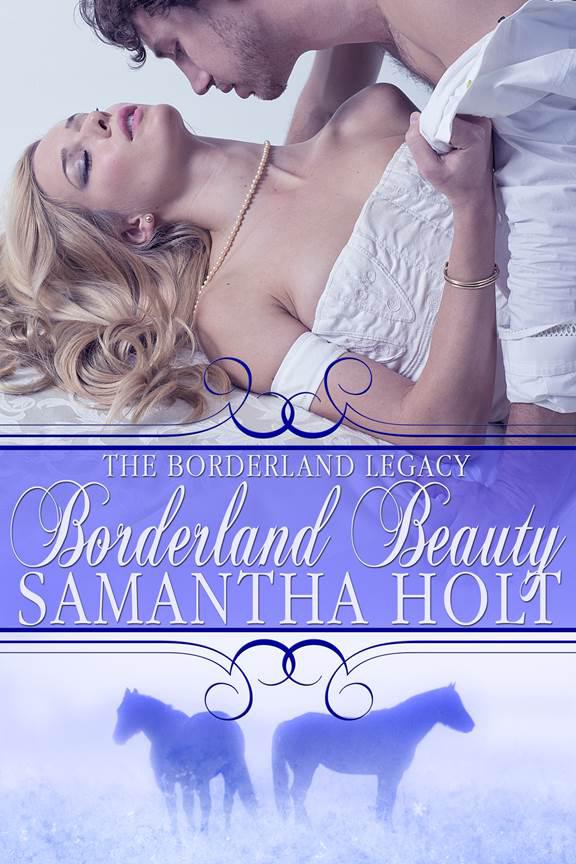 The scanning, uploading and distribution of this book via the Internet or via any other means without the permission of the publisher is illegal and punishable by law. Please purchase only authorized editions and do not participate in or encourage the electronic piracy of copyrighted materials. Your support of the author’s rights is appreciated. Permission is granted to make ONE backup copy for archival purposes.

This is a work of fiction. Names, characters, places, and incidents are either the product of the author’s imagination or are used fictitiously. Any resemblance to actual events, places, organizations, or persons, living or dead, is entirely coincidental.

This book may not be reproduced or used in whole or in part by any means existing without written permission from the publisher, Jupiter Gardens Press.

“Thornewall?” Lucy stared at her mother. “We’re to go to
Thornewall
for Christmas?”

Her mother eyed her with a look of bemusement as she hauled out a gown from the wooden chest that occupied one corner of her chambers. “Aye, this will do nicely.”

“You know I loathe large gatherings, Mother. And Thornewall of all places…”

“Aye, my dear, I know you do. Though Lord only knows why. A girl of your…age should welcome the chance to meet fine men and there is no place better to do it than in Thornewall.”

Slapping her comb down on the table in front of her, she turned from her mother. Lucy contemplated herself in the mirror. What her mother meant was that it was time she found herself a husband. At one and twenty, she was turning into an old maid. She tilted her face, eyeing her complexion. It was pale and smooth, thankfully having lost the pallor that she used to be afflicted with as a young maiden, and it had not aged. Ack, not that it had made any difference. No man wanted her. No man ever had.

Her mother’s chattering cut in through her thoughts as she uttered a name she knew all too well, “…and Lord Dominic is, of course, a most handsome lord. You would do well to catch his eye, Lucy.”

Swiveling on her chair, she fixed her mother with a cold stare. “Lord Dominic is an arrogant blackguard. I would do well to steer clear of him. Anyway, ‘tis unlikely he would pay any attention to me.”

Her mother flung the gown she was holding across the enormous canopied bed and pressed her hands onto Lucy’s shoulders, urging her to face the mirror.

“You, my love, are a fine beauty. Lord Dominic, or any other man for that matter, would do well to have you for his wife.”

Her mother ran her hands through her fair hair as Lucy scowled at herself. Her mother had the blessing of dark, silky hair that did exactly as it should. Unfortunately for Lucy, she had inherited her father’s looks…and build. Her fair hair hung perfectly straight and would never curl, instead falling all the way past her bottom. It was not as mousy as it once was, for which she supposed she should be grateful. Years of horse riding and hawking in the sun had picked out pale highlights that at least added some interest to it.

“Well, Mother, I assure you, there is no chance of me ever becoming his wife. Men like Lord Dominic do not look at women like me and I would not wish it so. I would sooner die an old maid than marry a man of such repute.”

Gasping, her mother clutched her hands to her chest. “Die an old maid? Lucy, you taunt your mother so. ‘Tis most unkind. Anyway, I am sure you shall be an old maid no longer by the end of the Christmas celebrations.” Her mother’s grey eyes sparkled and Lucy’s stomach dropped. What was she planning?

“I just mean that you are bound to catch a man’s eye, that’s all, especially now that you are not so bu—so…so curvy.”

Lucy snorted. So buxom, she meant. She cast her eyes over her mother’s silk gown. She was as slender as a reed. Flicking a glance down at her own generous bosom, she heaved a sigh. Aye, she had at least slimmed out as she had aged. As a young girl, she had been as plump as they come. The weight had gradually dropped off as she became an active rider, but now she had a tiny waist and huge breasts that refused to be confined. To add to it, her hips still flared out and her bottom made any gown stick out whether she wanted it to or not.

Meeting her mother’s worried gaze, she offered her a small smile. “I have no need of a husband. Father is rich enough and Edward will inherit. I have no obligations to fulfill.”

Lucy rolled her eyes at her mother’s wistful tone. It was all well enough for her mother, who had happened to fall in love with the man her father had chosen for her, but she knew well enough few other people had been as lucky.

Dominic looked at his older brother with a shrug. “Aye. Apparently it was drawn up when we were but babes. Have you heard tale of it, Jake?”

Jake shook his head, sweeping a hand through his chestnut hair. “Nay, of course not. I would have said something, should I have known.”

Dominic thrust a missive into his hand and paced across the tiled floor of the hall as Jake cast his gaze over it.

“Why have we not heard of this before?” Jake asked him.

“Read on, Brother. Lord Walter Montgomery claims that he had hoped his daughter and I would come to know each other over the years before fulfilling the contract. Lord knows, Father was not of sound mind after Mother’s death, I suspect he may well have clean forgotten about it!”

Jake frowned. “You are a fine catch, I am surprised Montgomery has not forced the contract sooner. ‘Tis unusual for a father to be so concerned for a daughter’s welfare.”

“That we well know.” Jake was no doubt thinking of his wife’s father, who was as heartless and callous as they come, trying to sell off his daughter to a rich but wicked man.  “Though I expect you shall be just as soft-hearted should Izzy bear you a daughter.”

A gentle grin spread across Jake’s face and Dominic studied him for a moment. For everything that had happened between them, Isabel had done wonders for his brother’s surly temperament. It was fascinating to watch really, his huge older brother brought to his knees by a beautiful lass.

“How is Izzy anyway?”

“Aye, well. Though she does not take to confinement well. She’s keeping everyone on their toes. We shall all be glad when the babe finally comes…but back to this contract, Dominic. What shall you do?”

“Montgomery intends to visit for the Christmas festivities along with his daughter and wife. He asks that I meet with her, but states that it is up to his daughter to accept me.” Dominic shook his head. Some strange woman now held sway over his future. “I do not even recall his daughter, do you know of her?”

Stroking a hand across his broad chin, Jake studied the missive again. “Nay, but then I have few visitors to Greycroft, and you know I take little joy in festivities. It says here she has not visited Thornewall in many years. ‘Tis likely I’ve never met her.”

Dominic snorted. “Aye, which begs the questions, why is Montgomery hiding her away? Think you I am contracted to marry some beast of a woman?”

Jake eyed him with a raised brow. “You would do well, little brother, to cease your insults of your betrothed. Anyway, you have been seeking a wife for nigh on four seasons now. Why not marry this one? Lord knows you’ve had enough opportunities to marry, and you’re not getting any younger.”

“Ha, need I remind you, that I would have no need of a wife had you not stolen Izzy from me.”

His brother’s brown eyes darkened and his strong brow furrowed. Dominic had to prevent his lips from twitching.

“Isabel,” Jake told him pointedly, “would never have agreed to marry you had it not been for her father’s threats. Thankfully, she came to her senses and married the right brother.”

“
You
came to your senses, you mean, though you are both as stubborn as each other. But I will concede, she did marry the right brother.” Staring back out of the window, Dominic heaved a sigh. “Montgomery will be here this day, shall you be staying for the celebrations?”

“Aye, but I will return to Greycroft in the morn. I dare not leave Isabel any longer but, fear not, I shall stick around to protect you from this unknown maiden.”

“Aye, I know ‘tis normally the maidens that need protection from you but think on it, Dominic. If it’s up to the lady, then you need not be concerned. If you find her displeasing, turn off the charm for one night and scare her away. If she is not, then you finally have yourself a wife, along with an alliance with Montgomery. ‘Twould be well worth considering.”

“Turn off the charm? Easy enough for you to say, Jake, you have the manners of a wild boar.”

“Tell that to Isabel,” he said with a wry grin.

“Will you never let me forget that?”

Jake laughed before fixing him with a serious look. “Give the lass a chance. You need a wife, and a good one at that. Mayhap she will do you well. Even if she is not as pleasing to the eye as some of your previous conquests, she is likely to have at least a little more wit than all of them put together. Think on it, will you?” Jake snatched a goblet and poured himself some ale before throwing his large form into the chair by the fire. “When will they be here? The journey has wearied me some.”

“Not until later, I expect. Montgomery will likely travel after noon. Though he will want to be here before dusk.”

“The reivers are still causing you trouble?”

Dominic followed his brother’s suit and sat in the oak chair opposite, leaning into the fire. “Aye, and they are getting bolder. They snatched some livestock in daylight from one of the smaller villages not two days ago.”