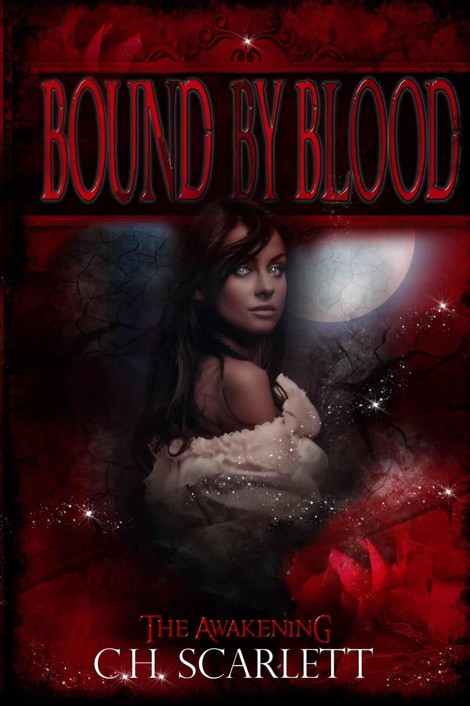 BOUND BY BLOOD Copyright © 2009/2012 by Casey Harris
/L.A.Harris/C.H.Scarlett
All rights reserved. All rights reserved, except for use in promotional review, the reproduction or use of this work in whole or in part in any form by any electronic, mechanical or other means, by technologies now known or hereafter invented, including photocopying, recording,
or in any information storage or retrieval system, is forbidden without the written permission of the Author, Casey Harris
, Swoope, Virginia, 24479
. [email protected] The story is fictional. Names, places and any similarity to persons living or dead
are
entirely coincidental.
Cover Art ©
2001/
2009
/2012 Casey Harris

This book is dedicated to…

Without you, I would
n’t
have tried
so hard.

For being patient and not complaining when supper never hit the table because I was writing.

To the origina
l Crone, everything a best friend, a spiritual sister, could be and more
,
Janice
C.
aka Z
eus

Because you believed in me and forced me to believe in myself.

Awakening
~
Every female
Vii must undergo an Awakening. The
period
that this happens in may vary. When it does happen, the Vii’s body and mind undergo dramatic changes. Her body enters stasis for three nights; a metamorphosis of sorts o
ccurs while her beast and female
spirit becom
e one. H
er birthright,
powers,
and prophecies explode into being.
See Awakener
.
See Vii.

Awakener
~
Every Vii has an A
wakener. It is a particular mate;
who is called to her once her body releases a
scent, which
is a signal that the tim
e of her Awakening has come. The Awakener will use
blood and a bonding ritual that will invoke her true nature within.
See Awakening. See Vii.

Beal- Tene
~
An annual festival announcing the coming of spring,
rebirth
,
and fertility-- when man
y of TEŔAH join together knowing
that
they are all connected through the Great Goddess and God.
It was symbolic of all species,
clans,
and bloodlines joining. It was symbolic of a magical unity of
realm
s.

Beast
~
Can refer to an animal that an immortal shares soul with
,
or can refer to just an animal, such as a horse.

Cryptos
~
Their bodies leak a poisonous gas. Their blood and excretions are known to poison and destroy vegetation
.
Their forms are rotting corpses with skin still attached, dried,
tightened,
and shrunken to the bones.

Dark Matter
~
The essence of evil. Much of it is still a mystery but it is known that it works like a plague, poisoning one’s spirit and soul, making one’s being evil. If something is born strictly from Dark Matter, it has no soul. Dark matter has been known to destroy universes, worlds.

Dim, dimming
~
the ability for an immortal to mute or overshadow the things about themselves that make them stand out as immortal. For example, they may dim their energy so that it is not noticed by others of the same or a different breed. Or they may dim their eyes so that they do not glow. It helps them blend in and be unnoticed.

Drãelac
~
an evil spirit who lacks flesh but hungers for it. It possesses the flesh and without flesh, it has no true form.

Essence
~
the fire that
resides in the blood and spirit of
anything
having life.
The fire of emotion, of energy.

Fãe
ŕé
~
creatures which can be compared to an earth’s Fairy. They are only a few inches in height. They wear transparent pastel colors that sparkle with or without the light. Trails of
Fãe
ŕé dust are dispersed from their energy and softly cascade downward. They love to free fall and they live among poisonous flowers that predator
s instinctively avoid.

Had
ãe
~
is the fire and cleansing
realm
of the underworld.  The deceased can pass through the fires of Hadãe in order to be cleansed from their old life and prepare for a new one. Viis can go here to renew themselves until t
hey gain the gift of Awakening
. Hadãe is considered to be the Essence of the Goddess.

Half Breeds
~
These come into being when one of Evil breeds with something other than a pure Evil bloodline, for example, if one of Evil breeds with a Phãegen. What comes of it is something which cannot sustain the power of Evil so they have more weaknesses. For instance they cannot complete a shift nor can they control their minds when they have shifted. (See Lessers)

Imprint
~
Anything using energy has an imprint, especially where magic or power is concerned. It’s like a finger print, a particular energy specific to each and every living thing. Immortals can pick up on this and track power to its original source.

Laying Claim
~
T
his can be done physically or in name only. It is a rite of power over a person allowing others to know that they belong to one of power, are under their protection and are linked to their powers.

Lessers
~
Lower than a half breed. They are usually what arises when a Half Breed attempts to create something, either purposely or from the aftermath of their actions. They have little power and are usually the first to be the pawns of Evil because they are expendable

Lycãon
~
Are but one clan of the twelve bloodlines. Those of the Lycãons were wolves, who shar
e
spirit with a
Strygĩ
man or woman. The
beast in them dominates
, as the
y keep
secluded inside the borders of their
mountainous
realm
,
away
from the
other
eleven families.

Lyderk
~
masterful creatures.
They can appear as a person, animal or a bright shining ball of light like an orb. They hypnotize their victim by whatever image necessary, then drain them of all their essence or lights. They do this by tapping into their victim’s thoughts and the deepest part of their soul. When they can find no weakness in their prey, a means to tempt them with, the
Lyderk change themselves into orbs of darkened light. The light serves as a default way to hypnotize an enemy.

Memoire doors
~
Ancient rooms much like a tomb, which hold the secrets of individuals of great power or importance. Someone who is guided can enter these rooms and watch the past play before them like a movie. Sometimes ones of power keep precious things here or things which hold great power.

Moppãe
~
children. A breed is called this when they are the youngest species compared to their master bloodline or the world around them.

Madness
~
Some immortals begin to suffer from this and it is greatly feared. It affects each one differently but the source of it is believed to be the Dark Matter, either directly or indirectly.

Mulra
~
They were once Phãegens who had been turned by one of Evil’s many Vampére breeds. Since they had died violently and were usually already weak minded and mentally disturbed, once awakened to their new nature, their minds would become prisoner to that moment of violence. They looked like Phãegens, however their afflictions or wounds, caused at the time of their mortal death, stayed with them.  They traveled closely allied with the Obryss.

Noŕa
~
lesser. They are
about five feet high and are usually bald or balding. They usually run around on all fours and can make themselves invisible especially when they feel threatened. They are perverse Lessers who once were human. They were unfortunate enough to have been turned by an Evil Vampére or to have survived an attack. It is hard to know what he or she looked like before they became a mutant, trapped between what used to be human and what was not meant to be evil.

NORS
Ŕ
AH
~
They l
ive in the
Realm
of the Chrystalis and are the master bloodlines of the Phãegens. It is said that they
are the guardians of the universe. They protect and feed the
Realm
of
Chrystalis, which
ke
ep the energies TEŔAH
moving properly.

Nosufur
~
Highly intelligent,
devious,
and Evil. They are born of Dark Matter. They are ruthless killers who just do so for sport. They have absolutely no body hair, skin which ranges from gray to stark white, and have fangs like a snake which hold venom.

Nosophoros
~
Nosophoros
means they are plague carriers, which is exactly what they do, carry a plague that kills mortals and slowly kills immortals. They lay eggs to create new spawn if they have enough corpses rotting to feed them through their generational process. They are much larger than the Noras and just as fast. However, their skin is weaker which means in battle, they are easily punctured. They have no healing ability which means their blood, black ooze, seeps out and poisons whatever it touches.  If a warrior is cut in battle and the blood infects it, the warrior will slowly die, painfully. Their venom can paralyze their prey so that they can eat and feed on them alive. Their prey feels everything.

Mis
t ~
(also called vapor) is a means of transportation by an immortal. They simply dissolve into light moisture, a mist, in order to go from one place to the next.