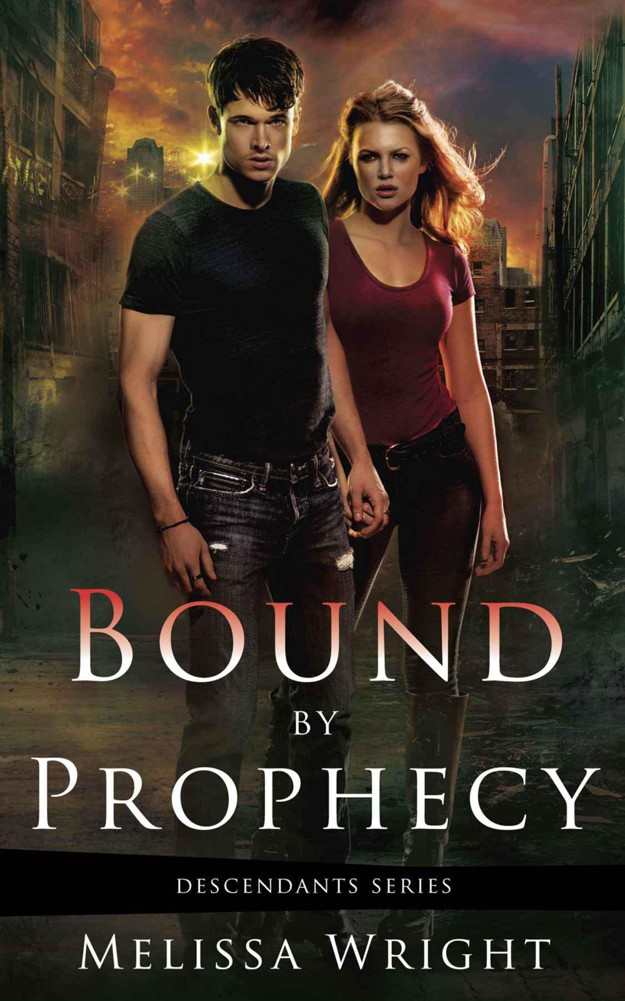 This ebook is licensed for your personal enjoyment only. This ebook may not be re-sold or given away to other people. If you would like to share this book with another person, please purchase an additional copy for each recipient. If you’re reading this book and did not purchase it, or it was not purchased for your use only, then please purchase your own copy. Thank you for respecting the hard work of this author.

This is a work of fiction. Any resemblance of characters to actual persons, living or dead, is purely coincidental.

Special Thanks to author RK Ryals, for unending support and inspiration. To Jenn for boundless enthusiasm, and Brittany for honest feedback.
You guys rock! And to my mom, who still asks each day how it’s going.

Chapter 16 A Turn for the Worse

For thousands of years, the Seven Lines have held a prophecy. The details are vague, as such things often are, but it can pretty much be summed up like this: Do things right, or everyone will die.

They called it a thinning of the blood. Though most of our ancestors’ magic had slowly weakened, it still left us the ability to hold sway over humans. I glanced around the room where I hung chained by the ankles.
Damn sight of good it’s doing me now
, I thought.

“Aern,” my brother asked coolly, “where did you hide the girl?”

I glanced at the abandoned warehouse’s walls. The concrete floor. There really was no way out.

Morgan stepped closer, plainly irritated he had neither my answer nor attention. “Aern.” I recognized the fury in his tone, though he tried to mask it. He was a lean man, only an inch or so shorter than I, but he was strong. Not only his body, but his mind, the power to control any human he touched. He was stronger than the rest of us, and that was why he needed her.

I finally looked at my brother.

“The girl,” he demanded.

He looked odd from this perspective. His custom-tailored suit, his Italian loafers, all of it wrong now. I tilted my head to see him better. Maybe it was just the blood rushing to my brain.

“Have you lost weight, brother?” I asked. “You seem thin.”

I smiled, though my cheeks throbbed with the effort. I could feel the blood vessels expanding at my neck and temples. “Must be the stress,” I said.

He shifted. “Tell me or I will flay you.”

“You should try yoga,” I offered. “It’s very soothing.”

He took another step forward, doing his best to control the angry glare that wanted to take over his chiseled features.

My ears began to pound.

“Brother”—he reached out a finger and pushed and my body began to swing slowly—“you will not escape with her.”

The low thrum began to pulse through my entire body. I relaxed my head back as I hung, still swaying from the push. I wasn’t certain how much longer I could stay like this.

Morgan lifted the lapel of his jacket with one hand and gracefully removed a thin silver dagger from an inside pocket with the other. He let me stare at it for a long moment before he whispered, “Is she worth it?”

“You and I both know you can draw and quarter me right here,” I said. “But you will get nothing.”

Morgan smiled. “You can’t even say her name, can you?”

“You will get nothing,” I repeated.

Suddenly, a heavy warehouse door slammed against the metal siding as it was thrown open. Morgan was within striking distance and I took the chance, the only one I was likely to get.

As his head swiveled to find the source of the noise, mine swung forward full force and connected with the bridge of his nose. His eyes narrowed on me as tears welled up and blood began to stream over his lip.

My blood pounded and ears rang, but I didn’t hear movement from the intruder, only the distant wail of sirens.

Morgan watched me for a heartbeat before sliding the dagger back into his breast pocket. His mouth turned up in a triumphant smile one instant, and then he was running past me the next.

I tried to turn to see where he’d gone, out some back entrance apparently, but I had limited mobility, suspended as I was. When I swung back to straight, there was a face inches from mine. I admit I may have jumped, if only a little.

“Where is my sister?” she hissed.

Under normal circumstances, my mouth might have fallen open.

She smacked me. “My sister. What did you do to her?”

I shook my head. Glanced at the chain hoist that attached my harness to the warehouse wall. “No,” I started, but the girl wasn’t looking at me now. She was watching the door.

The sirens were getting closer. And something else, a muffled buzzing.

The girl turned back to me, nodded. I was struggling to find my focus, to sway her to co-operate. She seemed a bit panicked, but for the wrong reasons.

“Here.” I tilted my head up to indicate my bindings. “Untie me. I will help you find her.”

Her eyes narrowed and her mouth screwed up as she considered my proposition.

The sirens were at the gate.

Car doors slammed. She knew I was right.

And then she was gone. “Wait,” I shouted, “where are you going?”

She didn’t look back as she ran across the open floor. She moved with such unrestrained fervor, I half expected her to slam into the wall. As she reached up, she pulled a screwdriver from her back jeans pocket, and pried the lever that held my chain.

An instant later, I slammed into the concrete floor.

Fire spread through my shoulder, but the pounding in my head was replaced with the reverberations of a small, clanging bell. Tingling prickled my limbs a moment before I realized my feet were being jerked, and the twinkling lights flashing against blackness were the first indication to my brain that I couldn’t see anything. The tingle turned to pinpricks and the ringing in my ears quieted as I tried to bat my eyelids open.

The jerking at my feet ceased.

Her face was in my line of sight again, this time sideways.

The girl reached down to grab my arm, and the fire increased tenfold. I said something like, “Aaaaah,” and she let go.

Apparently, I’d managed to keep from busting my skull against concrete by shifting my head sideways during the fall, but had taken the brunt of the hit on my shoulder, which was likely now broken.

The girl was pulling up on my other side. “Come on,” she hissed, “we have to go.”

Two deep male voices echoed off the exterior walls of the warehouse.

She yanked hard against me, and eventually my instincts kicked in. Or at least adrenaline. I was up, nearly falling forward before being pulled behind her toward a short flight of metal grate stairs. My right arm swung limp behind me; I was completely unable to support it since my other arm was held within her considerable grip.

As we climbed, I glanced behind us, saw a shadow through the open warehouse door, and then stumbled on the threshold of a back entrance as I was dragged into daylight.

The murky water of the bay lay only thirty yards before us, but I was abruptly jerked sideways and led down the deck through a narrow pass between two storage containers. At the end of the pass, the girl stopped dead to peer around the containers. I leaned forward, heaving in breath. Before I got two searing lungfuls, she was off again, my forearm firmly in her grasp.

I was about to complain, or free myself to lie down, when she slid into a shed.

She pushed me down beneath a boarded window, and I leaned back against the shed wall, half hidden from view of the door as she held it open a fraction of an inch to watch for our would-be pursuers.

It was dim in the shed, and the thin line of light put most of her in shadow. I looked away, quickly surveying our surroundings. An unused maintenance shed, shelves now empty of anything of worth. Dust silhouettes decorated the walls, outlining empty nails that once held pliers and wrenches and spools. A few lengths of wire scattered the floor, along with years-old paper and trash.

I was sure there was something I could use to fashion a sling for my arm, a way to take the strain off my shoulder, but my eyes were back on the girl.

Light filtered through the soft curls of her hair, making the color, somewhere between dark blonde and light brown, appear golden. Her features were petite, aside from her lips, which seemed maybe too full from this vantage point. She was remarkably familiar, and yet, inexplicably, unfamiliar. It was impossible to see her eyes, narrowed on her task as they were.

Her shoulders rose and fell in a way that said she was trying to be quiet, but needed breath as much as I.

A metallic sound echoed in the distance and she pushed the door shut. When she turned, her hands waved frantically in a gesture meant to shoo me farther back and out of view. I felt my mouth quirk at her actions, but any humor instantly fell away when I shifted and pain seared my neck and shoulder anew.

Farther back, I leaned once more against the shed wall.

A missing slat in the half wall protecting me gave me a view of the opposite wall, where the girl had flattened herself against it between a cabinet and a hanging rack in an attempt to hide. She was unaware I watched her.

Two voices floated over us, their direction hard to discern as they reverberated off metal sheds and containers outside. The girl held impossibly still—I couldn’t even be certain she was breathing. My gaze narrowed on her as I attempted to better see in the darkness.

Her lips were moving, and I found myself leaning forward to read them. Was she praying?

The shed door swung open and I froze, holding my breath.

I could approach the man, probably should. I could sway him into letting me go and detaining the girl.

But I wasn’t confident I’d succeed. Not simply because the officer would be difficult to touch, nor the fact that he would likely hold me at a distance at gunpoint until the other arrived, but because something had gone wrong above the warehouse floor.

I had tried to reach the girl by sight alone, and it hadn’t worked. She’d released me, yes, but she’d run across the warehouse to drop me like a sack of oats when she could have unlatched my arms as I’d asked and safely rescued me. And when I’d landed, she’d not responded to my mental requests, instead unlashing me to yank behind her like a leashed dog and then throwing me into this cubby hole in a shed.

I was afraid something was off, that something had happened when I’d hit my head.

Back Bay by Martin, William
Sanctuary by Nora Roberts
Ace-High Flush by Patricia Green
Black Mirror by Gail Jones
Blue Horizons (A Horizons Novel Book 1) by Andrews, Kathryn
Stevr (The Mating Games Book 5) by Catty Diva
Surrender To Me by Sophie Jordan
The Intimate Adventures of a London Call Girl by Belle De Jour
Naked Dragon by G. A. Hauser
Playing for the Ashes by Elizabeth George