Read Bound For Me Online 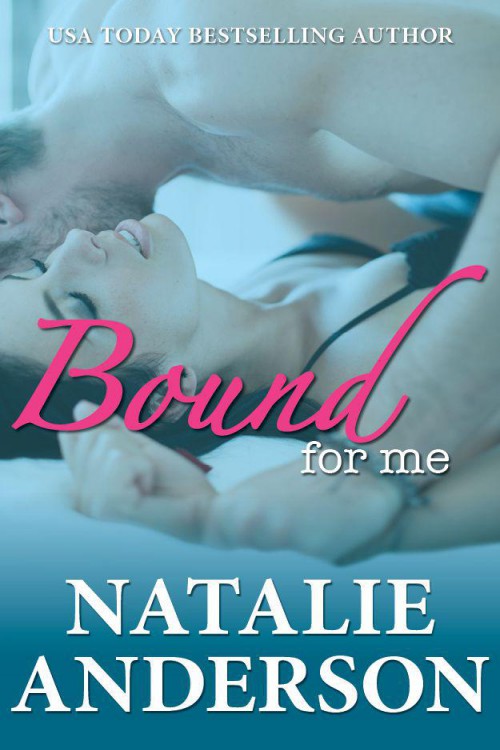 All rights reserved. Except for use in any review, the reproduction or utilization of this work in whole or in part in any form is forbidden without the prior written permission of the copyright owner of this book.

This ebook is licensed for your personal enjoyment only. This ebook may not be re-sold or given away to other people. If you would like to share this book with another person, please purchase an additional, authorized edition for each recipient. Thank you for respecting the hard work of this author.

This book is a work of fiction. While reference might be made to actual historical events or existing locations, the names, characters, places, and incidents are either the product of the author’s imagination or are used fictitiously. Any resemblance to actual persons, living or dead, business establishments, events, or locales is entirely coincidental.

The author acknowledges the copyrighted or trademarked status and trademark owners of the following wordmarks mentioned in this work of fiction: Band-aid; Thor; YouTube; Facetime; Rubik’s cube; iPad.

Savannah Nash suppressed a smile at the roughness in her new customer’s request. “It’s not cold enough out there for you?” she asked, bending to pull a bottle from the fridge behind the bar.

It was currently less than fifteen degrees Fahrenheit in Summerhill, Colorado. Cold enough to freeze a polar bear’s ass and ice-up the hottest drop of mercury. And for Louisiana born and bred Savannah, it was almost intolerable.

Her gravel-voiced newbie didn’t answer. Must’ve had a bad day. Clearly he’d had a long one, given it was only four minutes ’til she closed the bar. Almost all of her customers had left already. All but the worst.

She turned back, beer in hand and glanced up at him.

She almost lost her grip on the bottle as eyes bluer than the clearest sky on the coldest winter’s day pierced her. Correction, they
stabbed
.

Startled, she stared right back at him, confused as to what was the cause of that anger. That accusation. Sure he might’ve had a bad day, but there was no need to look at her like she was to blame for all the world’s evils.

Savannah swallowed and lifted her chin, refusing to break that fearsome eye contact. She wasn’t going to be cowed by a mere look. She flicked the lid off the bottle with a quick one-handed maneuver and set his beer on the impressive slab of polished wood between them with a definite snap.

Who was she kidding. It wasn’t the
wood
that was impressive. Mr Broad-shouldered Bad-mood was
impressive
in that bright mountain safety-jacket and wearing a close-knit black wool hat that emphasised the razor-sharp angles of his jaw.

All these details she absorbed by osmosis, because that look in his eyes?

He wanted it as cold as it came. Well no freezer could make any beer as cold as his unblinking blue eyes.

He didn’t pick up the beer. She didn’t ask for the money. For who knew how long, she met his chilly gaze. The emotion in his eyes didn’t lessen any, but gradually it did mutate. The anger eased, something else rose. Desperation? Exhaustion? Then… something else entirely?

And that look in his eyes wasn’t anywhere near frosty now. It was fiery and—startled?

She blinked and looked down at the bottle, surprised by the urges rippling low in her belly. She
never
indulged. No drinking on the job. No men. Not even the strong, silent, arrogant as hell type.

“Would you like a glass?” she asked with rigid politeness, refusing to meet his eyes a second time.

Refusing to be intimidated.

She was
never
intimidated. And she was never turned on by remote, overly-serious strangers.

In answer he placed a bill on the bar and picked up the bottle.

“Anything else?” she prompted, his stony silence spearing stupid amounts of irritation through her.

The customer was always right and Savannah read customers better than anyone. If the man wanted space to enjoy a beer alone, good for him.

She wasn’t a small-talk kind of bartender anyway, but she had a perverse urge to get something out of this sullen ski-field liftie, especially since he’d started with that ‘it’s-all-your-fault’ glare.

Especially since he’d made her feel so prickly hot.

But all she got was a barely perceptible shake of his hat-covered head.

She took his money and went to the cash register. Now he was staring at her like she was some kind of uncooperative Rubik’s cube. She was used to being watched, but not with this kind of intensity. Maybe he was so deep in thought he wasn’t actually aware of what or who it was he was watching? No, he was too alert. She turned away from him but his gaze burned into her back. She stepped up and put his change on the bar, not looking into his face again.

Because in truth, that swirling emotion in his eyes—that anger and isolation?

She could relate to that. And that answering call of heat deep within herself scared the crap out of her.

“You ever see such a frigid bitch?” A jeering stage-whisper carried along the bar.

Oh, yeah
. Savannah inwardly sighed. Her other remaining ‘customers’ of the evening were clearly pissed her attention had been snagged elsewhere.

She didn’t flinch at the words. Didn’t want to let them know she’d heard. But they knew she had. They’d intended her to.

She knew the all-alone guy had heard too.

The three guys stood at the end of the bar, leaning against the wood. Jerk, Double Jerk and Ultimate Jerk-off. They’d been there every night for days. Had eaten the same thing for dinner each night. Drunk the same drinks. Talked the same talk. The worst—Ultimate Jerk-off—stood center as always; loud and obnoxious. She’d booted him out of the exclusive bar on the weekend for lighting up his cigarette in the no-smoking restaurant area—it had been his final number in a litany of loud-ass actions.

He hadn’t forgiven her. And he was letting her know it. Letting the whole damn world know it.

“You know what she needs?” he asked his friends with a snide laugh.

“Yeah, me hard up her ass.” Jerk answered.

“Three.” Ultimate Jerk-off, corrected them. “You guys can take front and back. I want her mouth.”

“Bet you I could make her want it.” Ultimate added, his stage-whisper turning into a brash boast. “She’ll want it from me.”

Savannah lifted her head and looked right into the blue eyes of the unnaturally still, silent man opposite her.

If she’d thought she’d seen anger in his eyes before, now there was naked fury. Incandescent rage of the apocalyptic, no-one-left-standing variety.

She lifted her chin higher, clenching her jaw.

His gaze flickered from her lips back up to her eyes. His narrowed. Slowly he pulled the hat from his head and put it on the bar beside his beer. Savannah snuck a breath to clear her fogging senses. His hair was shaved ultra-close. It was barely longer than the stubble on his jaw. He looked like he’d just escaped day one of basic training only he was beyond training, he looked like a master of lethal moves—like he was superhero strong—not just in a physical sense, but in terms of
resolve
.

“I’ll have her on her knees.” Ultimate Jerk-off elaborated loudly. “And I’ll pull her hair ’til she takes me so deep she chokes.”

For a split-second Savannah’s spirit wavered and she wished the ferocious-looking loner would get up and say something. Step in and tell them to shut the hell up. Save her the trouble.

But Savannah didn’t actually need anyone to save her. Never had. Never would. She took care of herself. She’d had to, so she knew how.

She straightened, pulling her shoulders back and pinning a bland look onto her face. As she turned towards the jerks, the loner grimly lifted his bottle to his lips.

Don’t let them see they’re getting to you.

She’d heard worse. Been treated worse. People had acted like she was invisible. She could pretend
they
were invisible.

She knew bullies. Knew what they wanted.

She walked towards the three men, letting the heels of her knee-high boots strike loudly on the wooden floor so they’d be heard over the low music from the sound system. The asswipes never commented when any of the other bar staff were within earshot, so it was unusual for them to talk like this in front of another customer. Clearly they didn’t think the liftie deserved a second thought. Savannah figured they were wrong. Just as they were wrong about everything else.

“Is there anything more you need
gentlemen
?” she asked. “It’s closing time.”

“Oh you know what I need, doll.” Ultimate leaned over the bar.

“Yes, I do know,” Savannah answered coolly, resisting the instinct to back away. “But is there something more you’d like from the
bar
, or do you think you might have had enough already?”

The two guys either side of him laughed. There’d be a cat call, wolf whistle or way worse any second.

“I’ll never have had enough of anything you offer, darling.” Ultimate Jerk-off’s eyes narrowed on her. “But do you know what you need?”

She didn’t answer. There was no point.

Super-wealthy and with a warped sense of entitlement, these three had arrived in the elite Summerhill alpine resort to ski and party-on just over a week ago. Within five minutes of walking into St Clair’s restaurant and bar on their first night, Ultimate here had asked her out. She’d refused—politely but with chilly finality.

Just as she refused all those invitations.

That’s when things had gotten interesting. Seemed Ultimate didn’t like the word ‘no’. He’d started playing the prick, his invitations becoming more and more frequent and more and more obscene.

Her boss at the bar was aware, but hadn’t wanted to ban them—because, ‘boys will be boys’. And these ‘boys’ were wealthy, connected, large spending customers.

Clover by R. A. Comunale
Like My Ex by Peters, Norah C.
Beethoven in Paradise by Barbara O'Connor
Life Is A Foreign Language by Rayne E. Golay
Beauty & The Biker by Glenna Maynard
Hot and Steamy by J, J
The First Garden by Anne Hebert
Gentle Persuasion by Cerella Sechrist
At the Break of Day by Margaret Graham
Blood Life Seeker by Nicola Claire