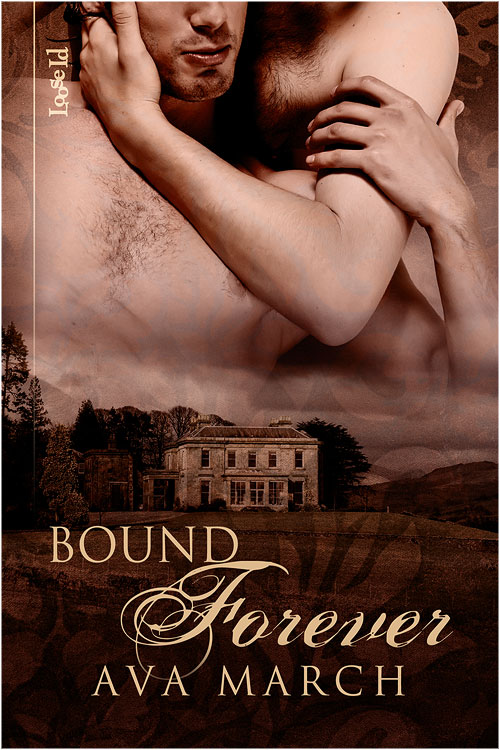 To G.G.—for making this series possible.

The familiar press of hot, silken skin against his thigh roused Vincent from sleep. For a moment, he kept his eyes closed and soaked up the feel of the soft breaths tickling the hair on his chest, the weight of the sleek yet honed body sprawled half over him, and the arm slung across his waist. A combined sensation that had not gone the least bit stale after a year and a half with this man, and one he knew for certain he would never grow tired of.

With the barely audible grunt of one in a deep sleep, his lover shifted, pressing closer. A smile stole across Vincent’s mouth. That was most definitely an erection, hard and insistent, the heat of it practically branding his thigh.

Desire flared under his skin, rousing his sleep-fogged senses. Blood rushed to his groin. What had once been the beginnings of a pleasant morning erection now pushed against the blankets covering him and Oliver. He blinked his eyes open. Light cut through the breaks in the forest green drapes but didn’t fully penetrate the night shadows clinging to the corners of the bedchamber. Judging by the crisp yet weak golden quality of the sunlight, dawn had just arrived. Plenty of time before his housekeeper arrived to cook breakfast and tidy the bedchambers.

A gentle nudge to Oliver’s shoulder and, taking the coverlet and sheet with him, Oliver rolled onto his back. Beautifully compliant, even in sleep. The chill December air hit Vincent’s skin, but he didn’t bother getting out of bed to light the fire in the hearth. Within a handful of minutes, the heat quickly building within him would make the warmth of a fire feel like a hot summer day.

Shifting onto his side, he levered up onto a bent elbow. Oliver’s chest rose and fell in a relaxed, rhythmic pattern. A whisper-light flick of Vincent’s fingers pushed the tousled waves of his overlong hair from his eyes. At the sight of Oliver’s hard cock jutting from the dark thatch of hair on his groin, Vincent smiled. They hadn’t played last night, merely crawled into bed together. One of the benefits of visits to his Rotherham estate—with so many nights at their disposal where they had the luxury of sharing a bed, they could take one or two or more to simply sleep together. But judging from the state of his pretty cock, Oliver definitely appeared up for some play.

Far be it from Vincent not to indulge him.

His gaze traced the length of Oliver’s body, as various options flittered through his head. He wasn’t of a mind to fetch anything from the locked trunk beside the dresser. That would require getting out of bed. However…

Leaning over the side of the mattress, he snatched the wrinkled white cravat from the floorboards. Carefully and slowly, he moved Oliver’s arms over his head. The long, black fan of his lashes resting against his high cheekbones did not even flutter at the change in position. The man slept as soundly as he had as an adolescent. Back when they had shared a dormitory at Eton, even a full-blown thunderstorm wouldn’t wake him.

A few deft flicks of the cravat and Oliver’s wrists were secured to the mahogany headboard, the knot loose enough so one quick tug would release it. When Vincent had purchased the estate from his father over two years ago, he hadn’t given much thought to the furnishings. His only interest had been the unwavering belief that he could turn the property into a thriving investment. The bed, though, with its four sturdy posts and intricately turned spindles spanning the width of the headboard and footboard, had proved as valuable to him as the vein of coal he had found in the northwest end of the property. And Oliver’s reaction when Vincent restrained him between those four posts indicated the man had far more fondness for the bed than anything that generated income.

Sitting back on his heels at his lover’s side, he took in the results of his handiwork. A corner of the sheet had tangled around one of Oliver’s calves, the rest of him bared to Vincent’s view. His legs were casually spread, one knee slightly bent. His arms stretched over his head put his flawless chest on full display. The white linen around his wrists presented an enticing contrast to his golden skin. Vincent let out a low grunt of satisfaction. The man had a body made to be bound and a soul that craved it almost as much as he craved Vincent himself.

He reached out, slowly whispered a hand down Oliver’s sleep-warmed chest, the skin soft and smooth beneath his palm. With effort, he resisted the impulse to pinch those copper nipples. To twist a hardened tip. To make Oliver shudder and gasp with pleasure. To make him beg for more. But it wouldn’t do to wake him just yet.

His attention slid back up to Oliver’s face. On anyone else, his features would almost approach average, but somehow he simultaneously embodied both beautiful
and
handsome. A hint of a morning beard darkened his jaw, his full lips slightly parted…

Vincent leaned down, brushed his lips across Oliver’s in the barest brush of a kiss, their breaths mingling ever so briefly. Then he moved along the bed to settle on his knees between Oliver’s legs. With one hand braced on the mattress, he bent down, wrapped a gentle hand around the base of that pretty prick, and lowered his head. Light and soft, he dragged his tongue across the crown, waiting, every sense attuned to his lover.

Oliver let out a breathy moan, more sigh than sound, and lifted his hips slightly. Vincent opened, let the slick head slide past his lips. The short, little, lazy nudges of Oliver’s hips as he fucked Vincent’s mouth indicated the man hadn’t awoken yet. Vincent kept his mouth languid and yielding, only occasionally sucking on a downstroke, allowing the flames of desire to build within Oliver, within himself.

It didn’t take long for a salty tang to tease his tongue. Vincent’s cock, hanging hard and heavy between his thighs, jerked in response. Another moan, this one more sound than sigh, and Oliver spread his legs wider. Vincent released his hold on the base of Oliver’s prick, cupped his ballocks, drawn up tight to his body, and rolled the weight of them in his palm. Then he drifted his fingertips down, past the smooth expanse of skin to his entrance. Pressed but didn’t penetrate.

Oliver’s thrusts stuttered. Glancing up, Vincent caught his gaze. His eyes were heavily-lidded, mere slits, the dark depths glittering with lust. Hollowing his cheeks, Vincent sucked hard as he dragged his lips up the length. Oliver arched with a moan, tugged at his bonds, and moaned again. His cock hardened even further in Vincent’s mouth. Vincent kept sucking as he began bobbing along the length. Increasing the pace, urging him onward.

Oliver had the edge of his full bottom lip captured between his teeth, desperate need pulling his beautiful features. Vincent swiped his fingers at the base of Oliver’s cock, gathering the moisture that had slid down the length. The moment Vincent brushed his entrance, Oliver pulled his knees to his chest, hips canting up, the request clearer than if he shouted.

“Please, Vincent.” Thick with need, his whispered words trembled on the air.

Lust slammed into Vincent. His muscles coiled, ready to spring forward to cover the man, to shove his hard cock into Oliver and give him exactly what he begged for, but Vincent held back and instead lifted his head, letting the crown slip from his lips with a crude
pop.

“Good morning,” he said, smiling, as he pushed a finger inside.

Oliver’s body greedily clamped around the digit and made Vincent’s cock ache with jealousy. Dropping his head once more, he dragged his tongue up and down the underside of Oliver’s length as he slowly stretched him with first one finger and then a second, forcing Oliver to wait. Letting the anticipation continue to build, needing to take him past the point of sheer desperate want to where the only thing that existed in his world was Vincent.

Pleas for more tumbled from Oliver’s mouth, mixing with his gasping breaths. A heady thrill sang through Vincent’s veins, briefly rising above the lust saturating his senses. It felt incredibly good to give Oliver pleasure. To know those pleas were because of
him.

When the tight ring of muscle began to relax, Vincent crawled up Oliver’s body. Oliver’s legs wrapped around his waist in welcome as Vincent captured those full lips with his own. With a muffled grunt, Oliver dove into the kiss. Urgent and greedy. His tongue tangling with Vincent’s, heavy breaths scorching his cheek. His need so strong Vincent could taste it.

So tempting to lose himself in the blistering heat and need of Oliver’s kiss, to let it completely overwhelm him.

But he pulled back, broke the kiss before the force of it wiped away all semblance of control.

Those heavily-lidded dark eyes, the ones that could see into his very soul, stared up at him. “Fuck me.” Oliver’s whisper held no trace of command, only pure unadulterated desperation.

A Lady's Guide to Ruin by Kathleen Kimmel
Winter's Dawn by Moon, Kele
Eona by Alison Goodman
Arrival by Charlotte McConaghy
The Humbug Man by Diana Palmer
It'll Come Back... by Richardson, Lisa
Djinn by Laura Catherine
The Prince Of Highland Park by Marilyn Faith
Surviving Day By Day (Book 1): So it Begins by Allensworth, Audra
Nick's Blues by John Harvey