Read Bound In Death (A Vampire and Werewolf Romance) Online

Bound In Death (A Vampire and Werewolf Romance) 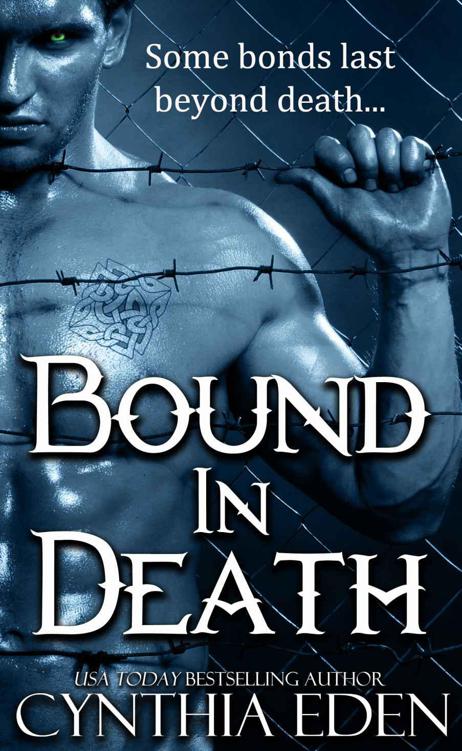 This book is a work of fiction. Any similarities to real people, places, or events are not intentional and are the result of coincidence. The characters, places, and events in this story are fictional.

Dedication:  A very big thank you to Eden’s Agents—you are all so amazing!! Thank you for being a part of my team!

Table of Contents
Bound In Death
About The Author

“
Please!
Don’t kill him!”  Keira McDonough’s scream, high and desperate, rang out across the crowded chamber.

Her cry cut through the noise as easily as the silver blade that had just sliced into his chest. The blade that had stopped right at Alerac O’Neill’s heart.

The men around him hesitated. No, these were not men. They were monsters. Vampires, hiding behind the guise of mere mortals.  They wanted his blood. Both to drink it and to see it staining the stone floor beneath his feet as he died.

Perhaps that dark wish was only fair, considering the fact that he wanted their blood, too.
And I’ll have it.
Alerac wouldn’t meet death without taking those bastards with him.

But then
she
was there. Keira blond hair whirled around her pale face as she shoved her way through the throng of vampires. They growled and flashed their fangs at her, but Keira didn’t stop. She didn’t fear the vampires gathered there.

“Lorcan…” She stared—her eyes wide and so damn blue that it almost hurt to look into them—at the man who’d just thrust that silver knife into Alerac’s chest. “Don’t do this. Please, I’m begging you!”

Keira should never beg.  Especially not for his life.

Among her kind, she was a princess. A treasure. One that he’d tried to take.

“Don’t,” Alerac gritted out the word even as smoke rose from his chest.  “Don’t you beg him for
anything.”
The silver blade burned, destroyed—that was its purpose. It was a weapon meant to be used against his kind.

Another monster, hiding under the guise of a man.

Only his beast was far more vicious than most could imagine.

Keira’s lips trembled, and she shot a quick glance his way before focusing on Lorcan once more. “I’ll take his punishment.”

The great room became dead silent. Every eye turned to Keira. Every eye, every ear, every fang.

And
he
was shoved down to his knees. The knife was jerked from his chest and instead put to his throat.

Lorcan turned his head and pinned Keira in his sights. “His punishment is death.  He came here, he
used
you, in order to get into our midst. To attack us from within.” Lorcan Teague’s voice cracked with fury.

The other vamps backed up in the face of his rage because Lorcan was the ruler. The leader of the vamp clan. A clan that Alerac had sworn to destroy.

He wanted these vamps to be nothing more than ash in the wind.

He’d learned that lesson too late.

The silver blade burned and cut along Alerac’s throat.  He wanted to tell Keira that Lorcan’s words were a lie, that he hadn’t been using her.

Only Lorcan wasn’t lying. Why bother with a lie when the truth was just as brutal?

Alerac’s plan had been simple enough, back in the beginning. Keira McDonough was the weak link in the vampire clan. The human who hadn’t turned, not completely. She’d been born to the blood, but her transformation to full vampire hadn’t occurred yet. He’d watched her from afar, because that was the only way
to
watch her.

The vampire princess. Locked away in her tower. Precious to her clan, so very valuable because of
what
she represented.

She’d been locked away, but he’d always been good at picking locks.  Getting to her side had been easy enough.

So had seducing her.

Keira had been his instrument of revenge.  He’d hoped to use her to get killing close to Lorcan.

Only now, Lorcan was the one with the knife.

That was why they held such value.

Lorcan yanked the knife away from Alerac’s throat and grabbed Keira. The vampire pulled her close, caught her chin in his hand, and tilted her face back so that he could stare into her eyes.

Alerac knew why Lorcan gazed so deeply into Keira’s eyes. If Keira were truly turning, then gold should be spreading in her gaze.

The gold will be there.
Alerac had already seen it for himself.  His hands clenched as he pulled at the silver manacles that bound him. He no longer felt the burn on his wrists or ankles.  Right then, rage was all he could feel. He wanted Lorcan’s hands off Keira. He knew the vamp lusted for her—
but you won’t have her. Not now. Not ever.

“You
are
turning,” Lorcan said as he held Keira’s chin. Then he cast a hard, suspicious stare at Alerac. “Have you fed for the first time?” His features—frozen forever in a mask of youth that made him look as if he’d barely passed his twenty-fifth year—were hard with tension.

She took my blood.
The blood of a werewolf.

First, she’d given him her body.  Trusted him as she had no other.  He’d seduced her slowly, day by day. Week by week.

He’d taken her body. Deepened the connection between them.

Then
she’d
bit him. His blood had been the first that she ever tasted.

In turn, Alerac had taken her blood and discovered a rush of power that he’d never anticipated.

Lorcan’s jaw locked. He lunged toward Alerac once more.

Alerac smiled at the bastard.

“He used you, Keira!” Lorcan snarled. Alerac’s blood dripped from the knife gripped in Lorcan’s left hand. “And yet you would give your life for him?
Why?”
His thundering voice echoed through the chamber.

The other vampires shifted nervously.  When Lorcan was this enraged, people died.  It was an understood fact.

Everyone there knew the pattern.  Lorcan’s love of blood and death was too well documented.

“Why?” Another bellow from Lorcan when Keira didn’t answer quickly enough.

Alerac saw the faint movement of her throat as she swallowed. “Because I love him,” Keira said  softly, but with certainty.

Alerac’s smile faded. Keira wasn’t supposed to love him. He wasn’t worthy of her love.

Now it was Lorcan who smiled. He shook his dark head. “You can’t die for him, Keira. You have too much value to us.”

That was right. Alerac eased out the breath that had frozen in his lungs. Keira couldn’t,
wouldn’t
die.  Lorcan could continue his torture tactics, but he wouldn’t be able to hurt Alerac for much longer. Alerac’s pack was coming. They’d be there before—

“But you can take his punishment,” Lorcan continued, all of the anger suddenly gone from his voice. Flat and cold, he said, “After all, you were the one to bring him in to our clan. A dog, walking among gods.”

“You’re no god,” Alerac shouted at him. Lorcan was nothing, a blood drinker who lived off the fear he stirred.  The werewolves were the truly powerful beings—both man and beast. Power and savagery in one dangerous package. And they didn’t have to
feed
off others in order to survive.

No, no, that wouldn’t happen to Keira.  His men were planning to attack the compound. They’d save Keira long before she suffered even a single night’s pain.

Keira eased closer to Alerac.  Her skin seemed to become even paler as she gazed at him.  They’d sliced him, cutting into his body with that silver knife for hours, and they’d kept him manacled with silver so that he wouldn’t be able to transform into the body of his wolf.

No transformation meant no healing.

They thought they were making him weak.

They were wrong. He was the alpha of his pack. There was no weakness.

Keira’s hand lifted. Her palm brushed against his cheek.

He’d had her under him, in bed, that very night.  He’d given in to his need one more time. Made a desperate mistake.

Lorcan had found them.

“Don’t,”
Alerac ordered her. The word was a growl from his beast.

Her smile broke the heart that he shouldn’t have. “I won’t let you die.”  Her chin lifted. Her bright stare cut toward Lorcan. “I will take the punishment, but you have to promise me that Alerac lives.” Her voice grew louder. All watched her with wide eyes. “No matter what else happens, he
lives.”

“Why?”  Lorcan’s lips were still twisted into a sly smile. “By the time you are free, he will be long dead.”

A battle that had raged for so long.

“Swear it, Lorcan,” Keira pushed, her voice even stronger now. “Vow it to me on the blood.”

Keira’s shoulders slumped. She glanced back at Alerac once more.  Then she bent before him, wrapping her arms around his shoulders and bringing her lips close to his ear.  “I know you did not love me,” she whispered, her mouth brushing against him. “But I loved you.”  Then she pulled back. Looked deep into his eyes.

The first time he’d seen her, he’d thought she was a dream.

Her lips pressed lightly against his.

Other vampires rushed to obey.

Keira was hauled back.

He stared up at her, desperate. Alerac wanted to tell her that help was coming, it was just hours away.
Hours? Or minutes?
During the torture, he’d lost track of time, and Alerac wasn’t sure how long it would be before dawn arrived.

But if he told her about the others, then all of the vampires would be alerted to his plan.  His men wouldn’t have the element of surprise on their side.  He had to protect his pack.

An alpha’s job was always to protect the pack.

Shackles were put around Keira’s wrists.

He leapt to his feet with a roar, ignoring the silver and the vampires who tried to subdue him. The power of his beast beat within him. The sight of Keira, bound, enraged him. Not her. No one could hurt her. No one
would
hurt her.

The manacles broke from the walls. He lunged toward Lorcan.

But vampires could move fast, so very fast. Before Alerac could reach him, Lorcan’s bloody knife was at Keira’s delicate throat.

“If she loses her head, she will die easily enough.” Lorcan’s Irish brogue whispered through the words. A brogue that he picked up, and dropped, seemingly at will. Lorcan was centuries old. Some tales said that he’d been born a Viking and had journeyed to Ireland long ago, bringing hell with him. “Do you want her death on you?” Lorcan asked as he studied Alerac. “Seems so pointless, especially when we worked out a deal.”

Prospero Regained by L. Jagi Lamplighter
The Thirteenth Skull by Rick Yancey
All Who Go Do Not Return by Shulem Deen
Twisting My Melon by Shaun Ryder
Catacombs by Anne McCaffrey
Pretty Hate (New Adult Novel) by Ayers, Ava
The Oasis by Mary McCarthy
Sharon's Wolves (Wolf Masters Book 10) by Becca Jameson
Rock Him by Rachel Cross
Center of Gravity by Ian Douglas