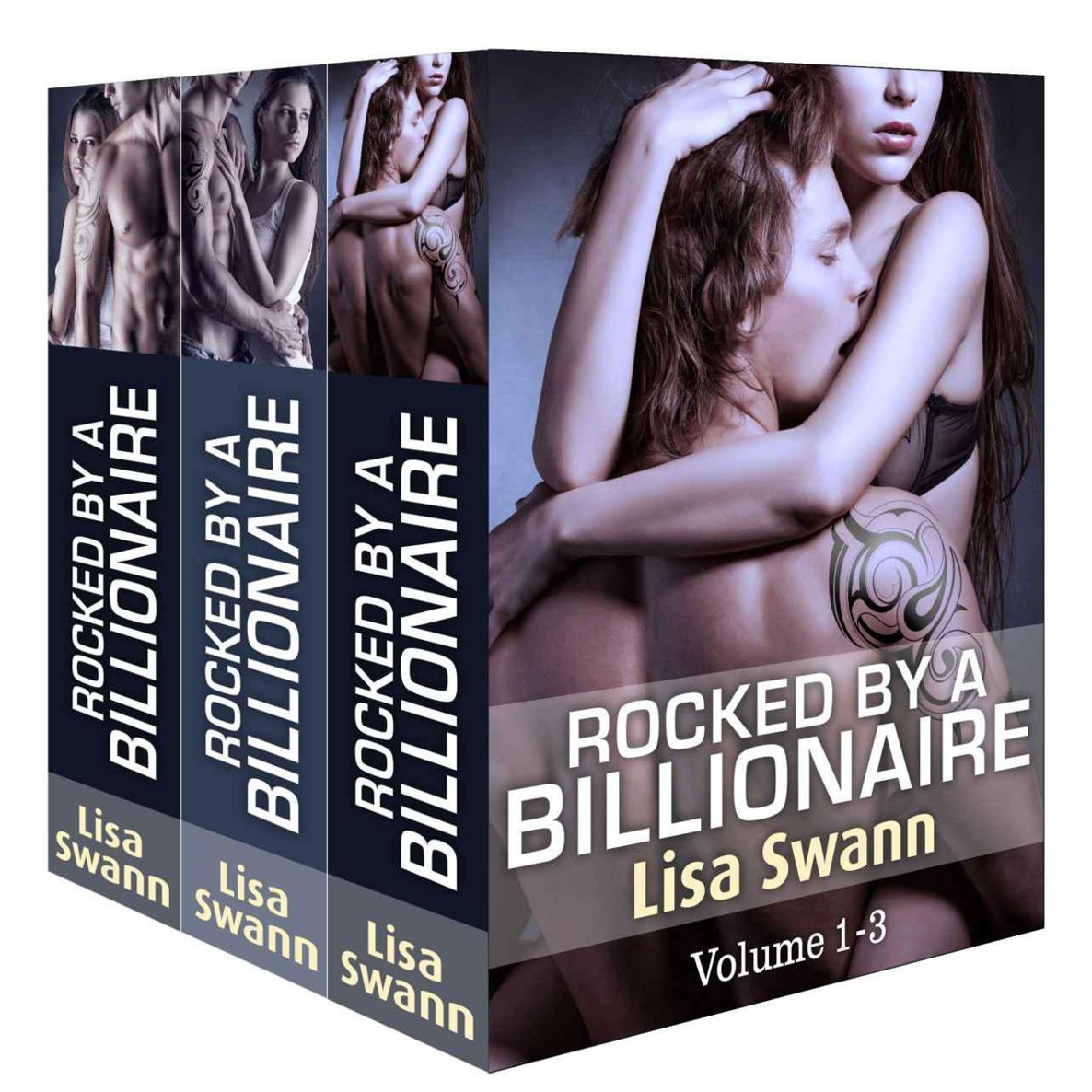 In your store:
The Billionaire’s Desires (Boxed Set)

He's handsome, he's powerful, he's a billionaire!
Mr Diamonds, an even more fascinating man than his name suggests, seduces young, pretty Amandine and introduces her to a decadent and mysterious world full of luxury, pleasure and above all, sensual and insatiable encounters...
A warning, the doors of desire are open, it's up to us to follow where they'll lead...

In your store:
Vampire and Billionaire Boxed Set

The world is divided between mortals and vampires. Society seems to have adapted to the coexistence of the two species, but doubts persist.
One night, a big sedan comes careening down the road and runs over Héloïse, a 22-year old woman. The man who steps out is obviously in a hurry. He picks her up and carries her to the car. This man is Gabriel, a gorgeous, mysterious vampire. Héloïse is going to have to stay at his house until the next new moon, 27 days later.
Sienna Lloyd describes their sensual and fascinating relationship with eloquence. A troubling, enchanting book at the crossroads between Twilight and Fifty Shades of Grey!

In your store:
A Possessive Billionaire

Emma Maugham moves to Paris to study...At least, that's what she thinks when she moves into the little attic apartment in a building owned by the mysterious multimillionaire Charles Delmonte.
Like a magnet, subjected to an uncontrollable attraction and then a sudden separation, Emma discovers the sensuality of an sensual relationship in the arms of the young and handsome Charles...but where is this going to lead?
A Possessive Billionaire is the most sensational sensual novel to have been released since Fifty Shades of Grey.

In your store:
At the Billionaire’s Command

Young, pretty Julia is spending six months in New York. Working as a receptionist in a luxury hotel, she's found the perfect way to improve her English. But just before she's due to go home, she unexpectedly meets the multi-millionaire Daniel Wietermann, aka Mr Fire, heir to a large jewellery label. She's captivated, submitting to his wildest fantasies and in the process discovering her own desires... How far will she go to satisfy the whims of this unfathomable man?
Discover the new saga by Lucy Jones, the most sensuous series since At the Billionaire’s Command!

Rocked by a Billionaire
Vol. 1-3
1.
An ordinary girl

It was hot. Incredibly hot. Beads of sweat dripped down between my breasts, creating a thin stream of warm liquid that ran all the way to my crotch. My light dress floated around me, the fabric lifted by slight puffs of air as the the warm breeze caressed my skin. But the wind, far from refreshing me, made my entire body boil hotter than smoldering embers. A hand covered in a black leather glove climbed up my thigh and started exploring my crotch. I spread my legs open wide to let him in. The leather squeaked along my skin. His touch should have surprised me as the cold material wasn't really appropriate for these circumstances. But, no. The sheathed finger probed a little further, spread my lips and entered me with a violent thrust that forced a hoarse cry out from deep down in my throat. Before I could understand how, the same hand was in my mouth, while his fleshy lips and teeth teased my hard nipples. Slowly, the fire burning deep inside of me spread up and I burned through every pore of my skin. Shivers travelled through my body despite the enveloping heat. I lowered my head and saw only the tousled hair of the man wearing the leather gloves. He stood up, turned around and I got a good look of his incredibly muscular physique...and the impressive erection poking out of his tight briefs – a funny outfit, I thought. A lewd smile spread across his face, half hidden behind a black mask. I slid, my tits in the air, along his smooth torso, nibbling, licking, sucking every square inch of skin while seeking his swollen hard-on, the object of all of my desires. I had no trouble pulling the beast out of his briefs, holding it in one hand, rubbing it up and down with the other while licking the foreskin. I dared to raise my head a moment to observe the effect, his lips were curled in a blissful smile, which gave me confidence. I took him full in my mouth, sliding my tongue along the gland, rising, falling. My lover moaned as I sucked, exciting me even more. I felt him stiffen and waited for the cum, like an offering, when a loud buzzer went off.

I woke up with a start. Disoriented. Halfway between dread and the most intense pleasure I had ever felt, I blinked, soothed and disappointed at the same time as I recognised the old pink flowered wallpaper of my adopted room, my refuge for four years now. On the other side of the wall my aunt was telling someone to get a life. Who's got the nerve to bother people so early in the morning?
My alarm clock displayed 7am. Oh lord, I have class in one hour. No time to think about that dream (or nightmare?) What was going on with me? Leather? A masked man? Sex? I'd never experimented with anything but missionary position with the few boyfriends who'd shared my bed. And I didn't have a problem with that either. It's not that I hadn't been in love before, but let's just say that I've never quite vibrated with desire. Sex, sex. Everyone makes such a fuss about it. I really don't see why. Besides, my mind was full of things that were more...intellectual, so to speak. And I had been in love with my boyfriends. It just goes to show. I didn't really think there was much to love and physical pleasure. I shook my head vigorously. I must have drunk too much white wine the night before, that probably explained such a disturbing night. Nonetheless, getting up, I noticed that the dream had produced an effect that was rather, well, wet in my pyjama bottoms. I blushed, as if caught redhanded taking part in some forbidden pleasure. I rushed into the shower to stop thinking about that masked man again and shook my head again. Me, someone who's never performed fellatio in my life, devouring such an enormous penis!

At 8am sharp I sat down next to my friend Jess in the last row of the lecture hall.

“Well that was a close call! Did you get back alright last night?” she asked, without looking up while copying her notes from the last class onto another sheet of paper.

She finished the last sentence, satisfied, and lifted her head, smiling, perfectly made-up and manicured. She turned towards me, eyebrows raised and added: “You're not going to win any fashion contests today.”

My frayed jeans, faded t-shirt and cardigan – incidentally made from pure virgin wool – weren't necessarily haute couture, but I liked wearing comfortable clothes. And besides, I commuted by bike! I wasn't about to go around in a miniskirt and high heels!

Jess must have been able to read my mind, since she retorted: “And don't try using your bike as an excuse! You can take the subway like everyone else. It's too bad. You'd be so gorgeous if you just put a little effort into it. Look at that hot guy with the brown hair over there, you could have him in the blink of an eye, if you didn't look so frumpy and actually combed your hair once in a while!”

It's true, completely absorbed in thinking about my dream, I did sort of neglect my hair that morning. My red mane must have been a little more disheveled than usual.

Physically speaking, Jess was the exact opposite of me. Always put together, even when she played sports, she had a natural sense of style and she knew how to play up her features: makeup, hair, clothes, all carefully studied and matched. She had breasts, a round butt and firm thighs that she loved to wrap up in tight, ad-hoc outfits. Her perfectly smooth, blonde hair gave her an angelic charm, but her sparkling, mischievous eyes showed the world she was no saint! No, really, there was nothing I could hold against Jess. And the way every guy looked at her as she walked down the hallways of the university confirmed what I already knew. She had palpable sex-appeal. A pretty perfect body, and a pretty good head as well. After a brilliant high school career in the United States, where she was born, she decided to come study law in France. She left her entire family and all her friends on the other side of the Atlantic. “I couldn't resist the temptation of Paris, I adore this city. And Parisians are just gorgeous!” she would say, in her flawless French to whomever was surprised by her choice.

Tesser: A Dragon Among Us (A Reemergence Novel) by Philbrook, Chris
The Shaman: And other shadows by Manzetti, Alessandro
At Home in France by Ann Barry
The Killer Inside by Lindsay Ashford
Cold Stone and Ivy by H. Leighton Dickson
High-Speed Showdown by Franklin W. Dixon
Forgotten Fears by Bray, Michael
Fire In His Eyes by Nightingale, MJ
Bad Samaritan by William Campbell Gault
Vampire Forgotten by Rachel Carrington