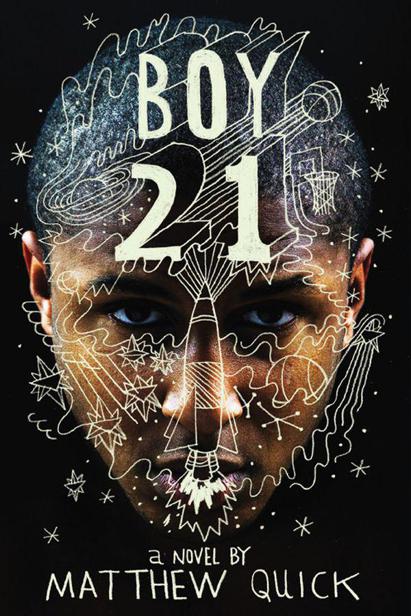 for all my brothers from different mothers

SOMETIMES I PRETEND THAT
shooting hoops in my backyard is my earliest memory.

I’m just a kid, so Dad gives me one of those smaller basketballs and lowers the adjustable rim. He tells me to shoot until I can make one hundred baskets in a row, which seems impossible. Then he goes back inside the house to deal with my pop, who has recently returned legless from the hospital, clutching my dead grandmother’s rosary beads. Our house has been silent for a long time and I understand that my mother is not coming back, but I don’t want to think about what happened, so I do as my father instructed.

At first, I can’t even reach the rim when I shoot, even though the hoop has been lowered. I keep shooting for hours and hours, until my neck is stiff from looking up and I’m sweaty. When the sun goes down, Dad puts on the floodlight and I continue to take
shots, because it’s better than being inside listening to my pop cry and moan—and, also, it’s what Dad told me to do.

You can lose yourself in repetition—quiet your thoughts; I learned the value of this at a very young age.

I remember the leaves falling and crunching under my feet, the snowflakes burning my skin, the yellow long-stem flowers blooming by the fence, and then being scorched by the powerful July sun—through it all I kept shooting.

I must have done other things—like go to school, obviously—but shooting hoops in my backyard is the only thing I remember from childhood.

After a few years, Dad began speaking more and shooting with me, which was nice.

Sometimes, Pop would park his wheelchair at the end of the driveway and sip a beer as he watched me perfect my jump shot.

The rim was raised every so often, as I grew.

And then one day a girl appeared in my backyard. She had blond hair and a smile that seemed to last forever.

I kept shooting and hoped that she’d go away. Her name was Erin and she seemed really nice, but I didn’t want to make friends
with anyone. I only wanted to shoot hoops alone for the rest of my life.

“Are you ignoring me?” she asked.

I tried to pretend she wasn’t there, because back then I was pretending the whole world wasn’t there.

My shot clanked off the rim and headed straight for her face, but the girl’s reflexes were good and she caught the ball just before it smashed into her nose.

When I didn’t answer, she fired and the ball went in.

“I play a little with my older brother,” she explained.

Whenever I shot around with my dad, the shooter got the ball back after a made basket, so I passed the ball to her and she shot again, and then again, and again.

In my memory, she hits dozens of shots before I get the ball back, but she doesn’t ever leave my backyard—the two of us keep shooting for years and years.

“A question that sometimes drives me hazy: Am I or are the others crazy?”

ONE WEEK BEFORE OUR SENIOR YEAR
of high school begins, Erin’s wearing her basketball practice jersey and I can see her black sports bra through the armhole, which is sort of sexy, at least to me.

I try not to look—especially since we’re eating breakfast with my family—but whenever Erin leans forward and raises her fork to her mouth, her right armhole opens up, and I can see the shape of her small breast perfectly.

Stop looking!
I tell myself, but it’s impossible.

I don’t hear one word that’s said over our eggs and sausage.

No one notices my staring.

Erin’s so charismatic and beautiful that my dad and pop never pay any attention to me when my girlfriend’s around.

When we get up to leave, my legless pop yells from his wheelchair, “Make the few remaining Irish people in this town proud!”

My father says, “Just do your best. Remember—it’s a long race and you can always outwork talent in the end.”

That’s Dad’s personal life motto, even though he ended up alone and working the night shift, collecting tolls at the bridge, where he needs neither talent nor a good work ethic.

Mostly because of Pop, my father’s life has been pretty dreary. But his eyes always seem hopeful when he says that I can outwork talent over the long haul, and so for him—and for me too—I try my best to do just that.

The nights Dad watches me play basketball, I truly believe that those are the best in his entire life. That’s one reason I love b-ball so much: for the opportunity to make Dad happy.

If I’ve had a good game, Dad’s eyes water when he says he’s proud of me, which makes my eyes water too.

When Pop sees us like that he calls us pansies.

Even though I don’t want to, when I look at her face and into her beautiful shamrock-green eyes, I think about kissing her later tonight, and I begin to stiffen, so I quickly wipe the thought out of my mind.

It’s not time for romance—it’s time to get strong, and basketball season’s only two months away.

SOMETHING YOU MAYBE NEED TO KNOW:
People call me White Rabbit.

Whenever they serve cooked carrots in the lunchroom, Terrell Patterson sneaks up behind me and yells “Feed White Rabbit!” as he dumps his carrots on my plate as a joke, and then everyone follows his example, until there’s a huge mound of orange.

The first time it happened, I got really mad because people kept walking by and scraping what they didn’t want onto my tray, which wasn’t very sanitary, especially since I hadn’t finished eating my lunch.

Erin—who sits next to me in the cafeteria when it’s not basketball season—just started eating the carrots off my plate enthusiastically and thanking people until they got confused.

She kept saying, “Delicious! May I please have some more!” all
crazily, until people were laughing at
her
instead of at what everyone was doing to me.

I actually like carrots, so I ate some too, because I saw that Erin’s plan was working and I don’t really care that people laugh when I eat those orange vegetables.
I’ll have better eyesight than everyone,
I thought, and then just left it at that.

The only problem is that the carrot dumping became a weekly event, and it’s really not funny anymore. I hope people forgot about it over the summer, but I doubt it.

I’m one of the few dozen white kids at my high school. I’m quiet like a rabbit. Eminem’s character in the movie
8 Mile
is nicknamed B-Rabbit; Eminem is the most famous white rapper in the world; and I actually sort of look like him.

But the main reason people call me White Rabbit is because we had to read this very sad book by John Updike. It was about a long-ago white basketball star named Rabbit who grows up and lives a miserable life. I’m not a star, but I
am
the only white kid on our varsity basketball team.

The nickname stuck and now everyone in the neighborhood calls me that too.

ERIN AND I GRAB OUR BASKETBALLS
out of the garage, and on my backyard hoop, we each shoot one hundred free throws. It’s our last high school basketball season—last shot—so we train hard.

Simulating game situations, we take two shots at a time and box each other out for rebounds. Erin goes eighty-eight for one hundred and I go ninety for one hundred.

Next we jog our five miles, dribbling our basketballs the whole time.

We do a mile of right-hand dribbling down O’Shea Street past a line of row homes that are as broken and gray as Pop’s teeth, which gets us to the school, where we continue running the next four miles on the old crappy track that actually has weeds growing up through the lanes. Every lap we dribble a different way—left-handed, crossover, behind the back. We pretty much practice every way you can legally dribble a basketball.

All the other basketball players in our school are also on the football or cheerleading teams, which practice on the fields next to the track, but they aren’t practicing yet this early in the morning. Erin wouldn’t be caught dead in a cheerleading uniform and I’m not talented enough to play more than one sport successfully. Besides, I want to give my all to basketball.

When we finish, we’re soaked in sweat. Little strands of blond hair stick to Erin’s face, and her cute little ears have turned red. I really like it when she takes off her practice jersey so that she’s only wearing the sports bra. Her bellybutton is a beautiful mystery.

We take a short break as we wait for the school to open up, because the custodians are late again. My muscles are warm and my body feels loose.

We don’t talk much.

Erin’s one of the few people I know who is okay with silence and, since I don’t like talking, it makes us a perfect match. I don’t stutter or anything like that. I just
choose
not to speak so much.

We sit in the grass silently for a time.

“You think girls’ll win states again this year?” Erin asks me, because she feels pressured to repeat.

What she’s really asking is if I think she’s good enough to carry her team all the way to another state championship, because our other star girls’ player—Keisha Powell—graduated last year and now plays for the Tennessee Lady Vols. None of the other remaining girls’ basketball players are even half as good as Erin.

Mientras vivimos by Maruja Torres
The Thug by Jordan Silver
One Red Rose by Rose, Elizabeth
Over It (The Kiss Off #2) by Billington, Sarah
Entice by Ella Frank
Bedford Street Brigade 02 - Love Unbidden by Laura Landon
Forever Santa by Leeanna Morgan
the Walking Drum (1984) by L'amour, Louis
Pierced by Sydney Landon
Eventide of the Bear (The Wild Hunt Legacy #3) by Cherise Sinclair