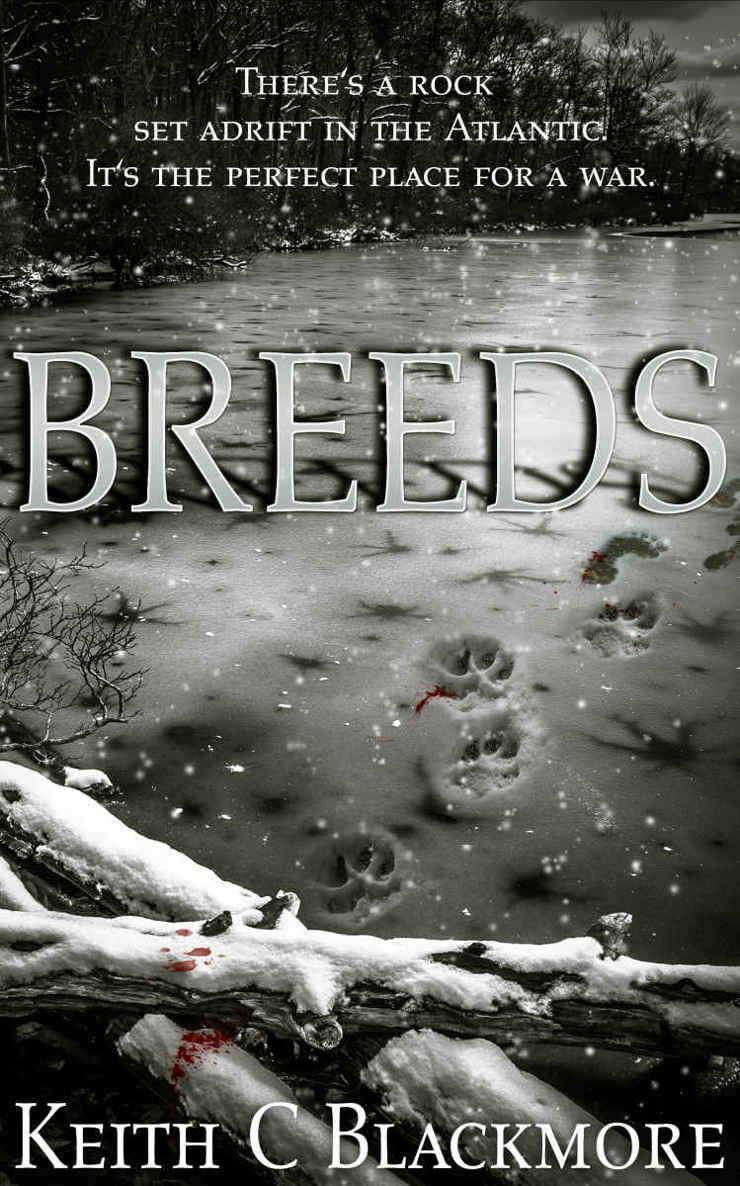 This book is a work of fiction. The names, characters, places, and incidents are products of the writer’s imagination or have been used fictitiously and are not to be construed as real. Any resemblance to persons, living or dead, actual events, or organizations is entirely coincidental.

All rights are reserved. No part of this book may be used or reproduced in any manner whatsoever without written permission from the author.

A special thank you to Ewart King for matters of all things handy and technical, as well as Joe Hart, Griffin Hayes, Brian J. Jarrett, and Miguel Tonnies.

Just to let you know––bad things happen to dogs in here. The dogs aren’t real, of course, (after all, it’s all fiction) but if you’re a dog lover, hell, an
animal
lover, you probably won’t like what happens in the pages that follow. For that reason and that reason alone, save your cash, and do not buy this book. It’s not my intention to upset readers.

Oh, and if you don’t care for violence or swearing… again, you probably shouldn’t buy this book.

And for the puppies.

The sound of boots chuffing through deep snow grew louder in the gauze of low-lying cloud, coming closer, hooking Borland’s attention from the bleary malaise of the wintry morning. He paused in his creation of a knee-deep trench, shoveling through last night’s fun from his front door to the storage “store” behind the cabin. He ran a tongue over his upper lip, felt the wiry bristles of the beard he refused to trim, and listened. Smelled.

“D’fuck ye want?” Borland muttered in his evolved Scottish-Irish brogue, the words becoming vapor. He sighed in annoyance. Whoever it was, he’d give ‘em an earful. Most of his neighbors considered him an old bastard to avoid, a reputation he had no problem upholding. He inhaled and tasted the chill on the air, felt the steely ache in his eroding teeth.

A figure appeared, black against the smoky white of the fog and the thick cream of fresh drifts. Borland watched the man struggle towards him and his cabin. The visitor wore winter boots that sunk into the frozen depths up to his knee, and a black and blue winter coat that looked more hip than actually warm. Young gun, Borland mused, though he suspected the visitor didn’t actually carry any such weapon.

With another weary sigh, Borland took his shovel and harpooned an untouched drift. Then he turned to his guest, who made no attempt at all to conceal his approach.

Not giving his senior the respect he deserved.

“Hello!” the stranger called out, repelling the black magic of the fog. He slowed to a stop, his arms at his sides. “Hello?” Softer this time.

“Yar.” Borland placed his gnarled hands on his hips in a gunslinger’s stance. “Who d’hell are ya and why y’here?”

“Looking for a man named Walter Borland,” the visitor said. Unibrowed shit, with a bearded face as black as a bear cub’s coat and bursting with youth. That pissed Borland off. With every passing second he felt all of his many, many years on earth. Felt it when he got up in the morning, felt it when he pulled on his stubborn, tight, bloods-a-bitches socks. His hips ached constantly, as did both of his shoulders, a deep, penetrating growl that scraped bone. It felt as if he were being stabbed by knives coated in some sinister, half-assed poison. And those were just his joints. He pissed four times a night, which confounded him, as he’d stopped drinking anything after seven, especially his favorite fizzy pops. He’d learned from the news that the carbonated shit increased a person’s risk of prostate cancer by thirty percent, and that was
all
he needed with all the other hurts his body was collecting as it passed contrarily through time. He’d once read a t-shirt that read, “Life starts at 70.” There’d be no sweeter bliss for Borland than to find the cocksucker who wrote such lying horseshit and wring his goddamn neck. Just strangle the bastard until the vertebrae crinkled and snapped. Growing old sucked
donkey
cocks, and he had the surprising ailments, the wilting sex drive, and the interesting phlegmy rattles periodically issuing from his lungs to prove it.

“You know where he is?” the man inquired.

No more than thirty, Borland figured, knowing he had calluses older than the aborted fuck puppy on his doorstep. That knowledge alone was very hard for him to swallow.

“I’se him,” Borland growled, suppressing a cough. “What’s it to ya?”

“Was told by a friend to check in on ya. You haven’t been answering your phone.”

“Me phone?” Borland scowled at the knee-deep Samaritan not twenty steps away. “Y’see any goddamn telephone wires out here?”

The man raised his hands in surrender. “You don’t have a cell phone?”

“Dem tings rots yer brain. And no, I don’t have one. Can’t afford one on me pension.”

“And d’fuckin’ companies dat lease or sell dem contracts have all de important parts in fine fuckin’ print. Dey see me comin’ and dey tink dey can sell me anyting. No sar. I don’t give dem Jesus bastards d’goddamn pleasure.”

This black bearded little shit smiled, baring healthy teeth. The enamel on Borland’s teeth had worn over the years, making eating or drinking anything agony.

“You swear like a sailor,” Blackbeard said with some measure of admiration.

“Hey, peckerwood, look down for a second, willya? Tell me what ye see?”

He did so, tentatively. “Snow?”

“Gettin’ close.
My
land. And yer standin’ on it. Which means I don’t give a tree knot fuck what bodders ye. If I really wanted to know, I’ll put me boot a foot up yer ass and watch yer goddamn eyes explode.”

Blackbeard’s enthusiasm melted like an early spring thaw. “Ah… well––” He paused, deciding on just how to best approach. “I was told to contact you anyway. Wanted to do some huntin’ in the area.”

“Yeah, huntin’. I was given your name. Told to ask for your permission.”

But Borland could see that his visitor
wasn’t
sure. In fact, he could smell the uncertainty coming off him as fragrant as fresh shit. That amused him. For all of the youngster’s bravado in coming out here by himself, that confidence had been shaken by a few crude exchanges.

But hunting, now. Borland could appreciate that.

“Tea?” Borland scoffed loudly and again eyed his visitor with distrust. “Might have a few leaves pokin’ around in d’house. Come on in ‘fore y’fuckin’ freeze yer nutsack off out here. Sure as Christ won’t find dem marbles in the snow.”

“Cold doesn’t bother me,” the man said. He looked to the heavens before meeting Borland’s face. “Love it.”

Love it? Love
the cold? Borland choked back a cough. No more than a minute and he despised this prick already. Showing his back, he shuffled to the front porch and stomped his feet on the planks, making them rattle as he cleared his boots of snow. He thumbed the old-fashioned latch on the cabin’s door and pulled open the black maw of an entryway. This he disappeared inside of, off to one side. He thumped around for a moment, and then materialized with an armful of split wood before heading deeper into the interior.

Blackbeard hesitated for all of a moment before following.

Inside, the heat emanated from a relic of a potbellied stove with curled black feet. Borland shuffled towards the stove and dumped the wood near a stacked pile beside it. He grabbed two cut junks, opened the polished chrome lid of the stove, and shoved them inside one after the other. Glowing embers flew.

“Chair’s dere,” he muttered and pointed to an old-fashioned, bare wood seater before shambling off through another doorway. By the time he returned, Blackbeard had sat himself down and was inspecting the ceiling.

“Where’d you get this stuff?”

“Hm.” Borland looked up at what hung from the rafters. Axes and old bow saws suspended from wooden pegs and thick nails. Coils of drooping rope. Cast nets with weighted balls dangling like thick, black spider webs. Below this, shelves lined with old cans of nails, all connected by a mesh of dust. And crowning it all, a massive set of moose antlers––a full eighteen points, complete with a scalped section of flesh––spiked to the north wall. Dirt and grease coated the windows, rendering them all but impossible to see through. The interior of the cabin appeared to consist of one room and an adjoining kitchen, along with a closed door behind Borland’s back. A broad, white-surfaced table rested against one wall, tucked in beneath a window, the one closest to the door. It was perhaps the only clear pane of glass in the entire structure. It also provided a view of anyone walking towards the front of the cabin.

Borland placed a dented blue kettle on the stove’s top and sloughed off his winter coat, revealing thick winter pants held up by a pair of worn suspenders. He stood at about five-eleven these days, shrunken by the hateful snarl of arthritis in his back. An age ago he towered over local folks at six-foot-three and was fearsome to behold. Now, he was balding, possessed old man’s skin, and hated every morning for yanking him from his dreams.

He scratched at the thick, gray wool around his jaw while he hung his coat on a wooden peg set into a wall. He then sat down with a groan on a worn, red sofa. Once settled, he eyed his unwanted visitor.

“I’ll get d’cups directly,” he said and glowered at Blackbeard. “What was it y’wanted again?”

The man flashed those white teeth of his. “Huntin.’”

“D’fuck y’want to hunt out here? Nudding’s in season, b’y.” He grunted, colloquially meaning
boy
, and saying it as
by
.

“So yer huntin’ me, in one way, eh?” Borland rumbled deviously, fixing his guest with a knowing eye.

“Y’talk funny,” Borland pointed out, filling the awkward quiet. “Yer not from around here.”

“Corner Brook. Yer a goddamn townie, aren’tcha? Dey all talk like ye out in Corner Brook?”

In the silent wake of the threat, a breeze gathered itself up and rattled the window.

“Look,” Blackbeard said, his voice measured, controlled, but his gaze locked onto Borland like heat seekers. “I was trying to get in touch. You had no phone––”

“This isn’t your house?”

Blackbeard took a steadying breath. “So I had to ask around and find you on my own.”

“Y’asked around about me?” Alarm sounded in Borland’s voice.

“To find out where you were.”

Borland didn’t answer for a few seconds, mortified, staring at the newcomer as if he had two heads. “Y’wanted to find I somethin’ fierce. Reminds me of a feller who came here about a month ago. He was over here. Huntin’.”

“Yeeeah. Proper nuisance he was, too. Seems like dat’s all I get dese days. Proper nuisances. De world’s gone nuisance. In my day it was do what you do to survive. Now, it’s do what you can wit what isn’t regulated by government or pissed on by dese self-interest or the animal rights groups. Get on yer nerves all them fuckers will. The whole Jesus bunch. Nosy, too. Whatta world is all I haveta say about dat. And one can’t even speak yer mind against dem in a public place as the fuckers’ll have someone on ya faster than a morning shit. Just for saying yer mind! Leaders don’t like dat. Fights are done in courts and y’can’t fight ‘cause a goddamn lawyer will charge three or four hundred dollars an hour. An hour! Who the hell can afford fuckin’ three or four hundred dollars an hour, eh? You?”