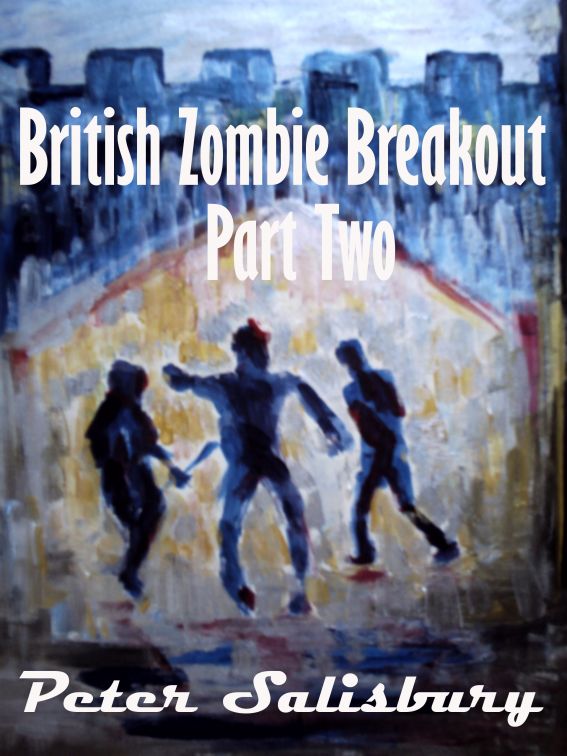 This ebook is licensed for your personal enjoyment only. The
contents must not be copied and distributed or re-distributed by
means of printed paper, electronic transfer or by any on-line
means, without the express permission of the author.

Thank you for respecting the hard work of this
author.

This story is entirely fictional and any resemblance to any
person or place is entirely unintentional and
coincidental.

Chapter
7: The Trick With The Stone

Deep underground in a concrete bunker, a phone rang in an
untidy office. The bunker was located twenty feet beneath the
surface of a fenced compound. Within the compound were several flat
roofed concrete sheds sufficient for detaining and processing up to
a thousand people.

The phone was answered by a bald man in his fifties wearing a
white lab coat.

'Is that the head of Breathdeep Biological Research
Facility?'

'Professor Mason speaking,' the scientist said, putting down
the scan of a terminally infected skull he'd been
studying.

'At last! This is the Minister for Home Affairs.'

'I see. I expect you want my report on the breakout?' Albert
Mason looked around his office: crowded desk, paperwork overflowing
beside the computer, and a bookcase stuffed with academic papers
and folders full of case-studies. There was also a wall-mounted
lightbox with several x-rays of skulls clipped to it and a square
of material on the floor which may once have resembled carpet.
Everything in fact, except said report. Still holding the phone, he
got up and pushed the door shut with his foot.

In a stern and haughty voice, the Minister continued, 'The
report, doubtless with its full catalogue of excuses, can wait.
What I want right now is something I can use to reassure the Prime
Minister.'

Mason sighed and cleared his throat. He'd had no break of any
sort since the alarm went off at 4 a.m. and it was now heading
towards midday. 'You can reassure the PM with the fact that the
army is rounding up every infectee…'

'Infectee! Don't use your jargon with me, Mason. These are
zombies plain and simple. Creatures maddened by one of the most
infectious diseases ever created. Zombies created initially in your
facility from an illegal deterrent weapon. One which was never
meant to be used but also was never, ever to reach the population
of England. Zombies, which, although once human beings, have been
transformed by your vile disease into psychopathic monsters intent
on murder and contamination of anyone they can get their hands
on!'

Mason waited until he thought the minister had reached the end
of his tirade. 'As I was saying, Minister, the army has been
deployed under my direction. The zombies …'

'All escaped from your supposedly secure research facility
last night. Where is it they've gone to this time?'

'Instead of heading inland like before, they went straight to
the nearest fishing village, a place called Kilkorne.'

'That's something of a blessing, I assume. How many innocent
people have they slaughtered so far?'

'You may further reassure the Prime Minister that most of the
occupants of the village were working, either in towns some
distance away, or had left two days ago with the fishing fleet. We
have made contact with all vessels in the fleet and they are to
remain at sea until further notice.'

'So, we know at least that they were not contaminated. What
damage was done in the village?'

'The less reassuring aspect is that the infec… er, the zombies
rampaged through the school on the way through the village to get
to the harbour. However, in the last hour I've received direct
communication that they have been surrounded by the army and either
killed or captured, together with any remaining
villagers.'

'Children! Can you imagine what the media are going to do with
this?'

'We found only one child who was actually injured, none
infected, we think.'

'Are all the other civilians accounted for?'

'What? You had better not be about to tell me that the country
is to be subjected to the scale of terror your 'Facility' dumped in
our laps last time!'

Professor Mason sank down into the chair behind his desk. He
decided against reminding the Minister that it was his ambitious
young predecessor who had made the zombie weapon. For the next
forty seconds he held the phone away from his ear as the Minister
for Home Affairs gave vent to his anger. Mason occupied himself
meanwhile by confirming in his own mind that the population of
southern England had been so depleted in the first disaster that
there simply were insufficient numbers of people left to propagate
the sort of infection which swept across the area last time.
Nevertheless, he realised that he would have to ensure no stray
infectees were able to break through the quarantine barrier he had
put in place.

'The problem is, Minister, that some of the Facility employees
here may have been infected and we are not yet certain of the exact
numbers of Kilkorne residents who are safely away from the
village.'

'So, what are you doing about it?'

'The army is liaising with the county council records office
via the police to identify everyone apprehended, dead or alive.
Simultaneously, we interrupt all TV and radio programmes every half
hour with public service bulletins, instructing anyone currently
outside the Kilkorne quarantine area that they must contact the
police on a designated number immediately.'

'I have some preliminary research results on the detection of
zombie blood, using Ultra Violet light.'

'Anything for early detection, so we know who's contaminated
and who's not?'

'But you're working on it. Day and night, I should hope. What
about the vaccine?'

Mason saw that the Minister was working himself up into
another fury. 'Vaccine production has been scaled up to produce
sufficient quantities for a trial.'

'Trial? The only trial it's likely to get is immediate use on
all infected subjects.'

'There may be ethical implications to consider with taking
that route.'

'Ethics? This entire project crossed all ethical boundaries a
long time ago. There are international treaties against this sort
of research. For good reason. I don't need to remind you that your
actions will be scrutinised with the utmost severity and that there
may well be charges of criminal negligence to follow, if your
clean-up operation does not proceed in a satisfactory
manner.'

'Minister, I understand perfectly,' Professor Mason said with
all the calm he could gather. 'I understand that if I am unable to
bring about a positive outcome, you also will be forced to resign.'
Without waiting for the minister's expected retort, Mason replaced
the phone on its rest and, feeling as grey and tired as he looked,
picked up an army issue walkie-talkie.

Inside the Kilkorne school canteen, the small band of the
survivors: five adults and five teenagers sat slumped around a pair
of the big, laminated canteen trestles. It was late afternoon on
the first day of the second zombie outbreak. The harbourmaster,
Janet Reynolds, and four friends had found a way to keep out of
harm's way and meet up with the teenagers who had spent most of the
day in the castle, until they headed back to the school. In the
still intact canteen, they found some much-needed sustenance in the
form of meat pies. Janet's own son, Steve, had escaped with four
other teenagers: Alex, Maisie, Rachel and Fred, who were all from
the same class. Since the two groups had got together, only Janet
and Alex had shown much determination about what to do next. The
rest of the individuals were still reeling from the events earlier
in the day.

'Why'd the zombies have to come here?' Maisie said, her face a
picture of dejection. Her pale blue school blouse had small rips on
the arms where she'd had an argument with a bramble patch when they
left the castle and her heavily streaked, mousey hair hung around
her face in a disorganised tangle. 'They like never bothered us
before.'

'Last time they did a pretty good job of wiping out everyone
in five counties,' Graham said. He was in his forties and kept the
TV repair shop. His wife Sarah sat next him, with Karen and her
husband Bill sitting opposite.

'About half the population of southern England,' Sarah
said.

'Yeah, well the Ministry and the army handed them that on a
plate, herding everyone together, infected or not,' Bill
said.

'No way to tell who was infected during the incubation period,
if you can believe that.'

'How many was it got out the last time, about two
hundred?'

'Two hundred was what they admitted to. Didn't help that most
of them were pre-symptomatic.'

'Right, so you couldn't tell they were infected, apart from
their behaviour.'

'I think they were trying to get to the sea this time,' Janet
said, returning to the previous question. 'A lot of them went
straight for the harbour.'

'Probably only because it was on the way and they knew it
would be full of all the local kids.'

'I wonder where all the others went to; the ones who like ran
off.'

'All the ones who survived will be on their way to Breathdeep
Camp.'

'That's where they killed my sister,' Rachel said.

'Good as,' Rachel turned away, a tear falling on her sleeve.
Her voice was ragged when she continued, 'Caging her up with all
the infected ones.'

Everyone was quiet for several minutes, occupied with their
own thoughts, until Maisie spoke again, 'Mrs Reynolds, how did you
like get away if the zombies were going for the
harbour?'